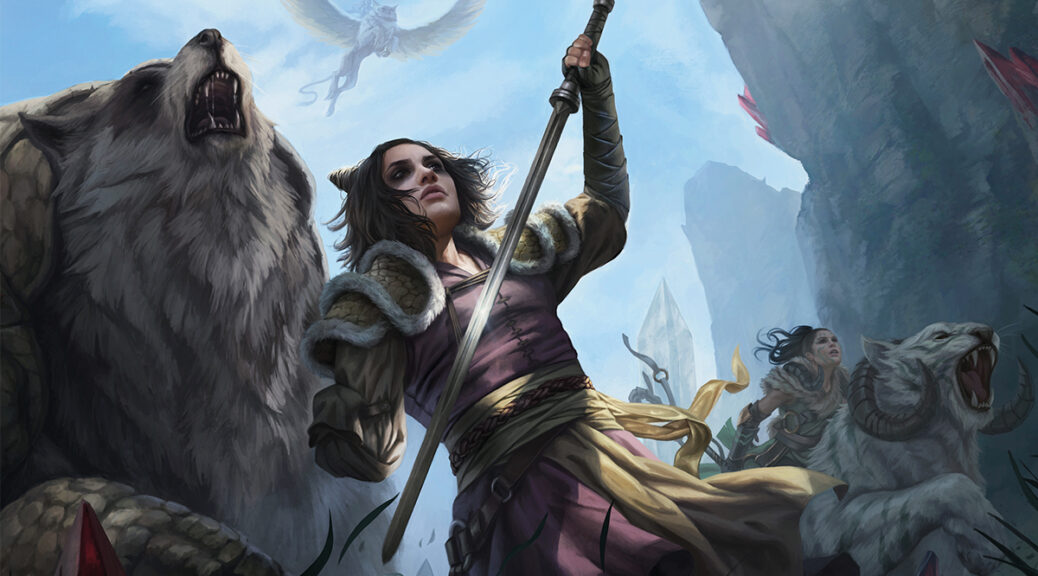 The Pioneer meta has been changing from week to week and it’s quite exciting to see new decks popping up in each paper tournament, as well as in the online challenges and leagues. Although decks like Winota and Mono-Red are still the top dogs in the format, there’s a lot of innovation going on with the rest of the decks that people are playing, and that is making for some good spec opportunities.

Once upon a time, Cavalier of Thorns was a dominating force in multiple formats but has since fallen off a little – until now. There’s been a revival of the old mono-green deck that’s been doing well in Pioneer over the past couple of weeks; a classic ramp deck that can drop mana dorks on the first two turns into a turn three Cavalier, Nissa or Storm the Festival. Nykthos is still an incredibly powerful card in the format even since the banning of Leyline of Abundance, and can generate absurd amounts of mana very quickly when you’re churning out Elvish Mystics into Old-Growth Trolls.

Cavalier provides extra devotion for the deck as well as finding copies of Nykthos, Boseiju or Lair of the Hydra, and even gets you a card back from your graveyard when it dies – this card does it all, and if the mono-green deck stays around in Pioneer then I don’t think it will drop down to any less than four copies of the Elemental. Looking at EDH numbers it’s less popular than I thought it might be, but with us already being three years out from the card’s only printing, demand is outstripping supply without too much trouble.

Regular copies are already $10+ on TCGPlayer, and with only fourteen NM listings, supply is dwindling fast. There are still quite a few cheaper copies available in Europe if you have access to that market, which could make for some quick arbitrage over to the US as this deck picks up popularity, and it’s worth hunting around some of the smaller online retailers and LGSs for copies that haven’t had their prices raised yet. I don’t think it will be very long before this is a $20-25 card, so don’t hang around if you want any of these.

Moving on from mono-green to mono-blue, the Spirits deck has evolved somewhat from previous iterations to a very aggressive deck that plays almost exclusively one- and two-drops, only stretching the curve out a little for a couple of copies of Brazen Borrower (I’m not counting Geistlight Snare as a three-drop because it should really always be costing one or two mana in this deck). This super-streamlined version of the archetype has been seeing a lot of recent success over its more midrange predecessor that plays Collected Company and a few more three-drops, but both decks share a card that is always played as a four-of in any Spirits deck: Mausoleum Wanderer.

This one mana 1/1 has quite a lot of text on it that makes it incredibly powerful – for starters it can often be swinging for three damage on turn two with a Supreme Phantom on the board, and on top of that it comes in clutch to counter removal spells or even boardwipes when you most need it to. I’ve played quite a lot of Spirits, both in Modern and Pioneer, and can safely say that Mausoleum Wanderer is one of, if not the best card in the deck.

Foil copies of this card are already very difficult to get hold of, but I think that non-foils are ripe for the picking right now. There are still quite a few hanging around, but at $2 I think they’re a safe bet; they’re generally going to be bought a playset at a time so don’t underestimate how quickly they could start to disappear. A very good sign for Wanderer is that CardKingdom are already paying $2.25 cash/$2.93 credit on them, so it’s obviously a popular card that they are willing to pay top dollar to keep in stock. Give it a few months or even less, and I can see this hitting $5 retail/$4 buylist for an easy double up. It’s not too exciting, but if you’re just buying a stack and then buylisting them, it’s easy money.

There are a few different versions of Sacrifice decks going around in Pioneer at the moment, and whether they’re Jund or straight Rakdos, they’re all playing four copies of Mayhem Devil. It’s one of the best cards in the deck, and the damage output it can provide should never be underestimated. Even just cycling a Cauldron Familiar and a Food token each turn is two extra damage to kill off a creature or hit your opponent directly, and it can add up very quickly.

Mayhem Devil foils have been all but snatched up, and will set you back a crisp $20 if you really want one for your deck (and good luck justifying $80 on a playset of uncommons from three years ago). Non-foils are also in relatively short supply and have crept up to $4-5 over the past couple of months – in the US at least. Over in Europe you can still grab a load of copies for €0.10-0.20, and although it might mean grabbing a few playsets from a bunch of different vendors, it’ll still easily be worth it compared to the prices on the other side of the pond.

This is some easy straight arbitrage, with CardKingdom paying $2.25 cash/$2.93 credit if you’d rather do that than sell on TCGPlayer, but I think that if you wait a couple of months or so then you’ll be further rewarded. Demand for this card won’t be stopping any time soon, and with only a single printing there aren’t many copies to go around. I don’t think that it’s something primed for a reprint in any of the next sets, so you should be good to wait a little while if you want to squeeze as much value as you can out of this spec – but if you can sell at a tidy profit and move the money into the next spec then that’s generally going to be the correct play.