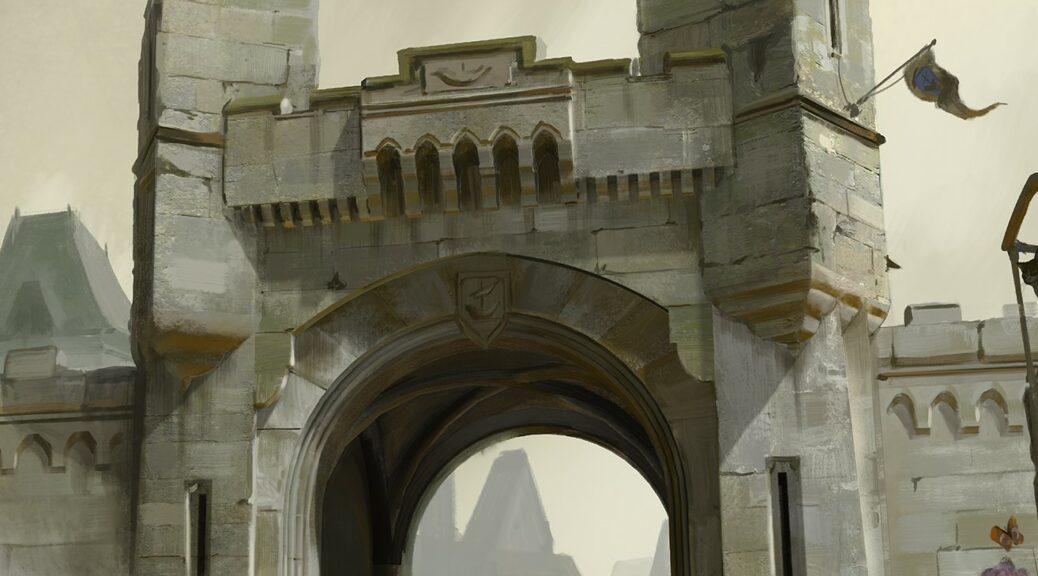 It’s normal to focus one’s attention on upcoming sets to look for the next big thing. Everywhere you look content creators are focused on new sets and the reasons are obvious. Content creators want your attention, and nothing keeps the public’s attention like a shiny new object. Yet when it comes to producing reliable returns, often the predictable and boring leads the way.

It has been a little over one year since Strixhaven, Commander 2021, and Modern Horizons 2 released. While a little boring, and repetitive, looking back on these sets with additional data and hindsight provides a great environment to begin cheaply stocking up on key commander staples at prices not previously thought possible. Supply on these sets is still deep enough to suppress prices while giving you the ability to buy “bricks”, i.e. large quantities, which is my favored approach. This is especially true for commander products – whose single prices remain extremely suppressed while pre-constructed decks are still in print and widely available. As you approach the end of a product being in print, typically around two years, prices tend to rise as supply starts to diminish and others begin to see the writing on the wall. Here are a few cards from about a year ago that I believe are set up for long-term success going forward. 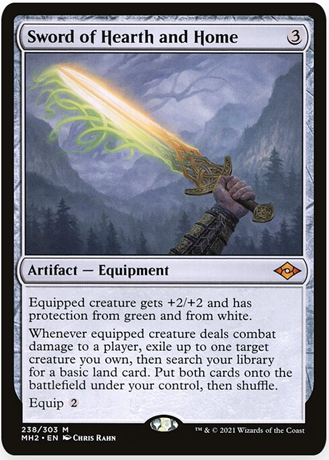 The sword cycle has been highly successful and profitable over the years. The most recent example was the Sword of Truth and Justice, which at one point was only $9 and has since climbed to $25, in spite of modest reprint. Even its counterpart the Sword of Sinew and Steel was on track to post sold gains despite modest play patterns, moving from $8 to $13, only to have its growth stifled by the reprint in Modern Horizons 2. Despite only being out for one year, the Sword of Hearth and Home is on track to soon eclipse the EDHREC numbers of both the Swords of Truth and Justice plus Sinew and Steel together. That is impressive. While the supply is abundant right now, that will quickly change once Modern Horizon 2 goes out of print. This card has hovered around $10 for a while, but I don’t think it will last. Absent a reprint, this card will no doubt present an easy double up, and likely more going forward. 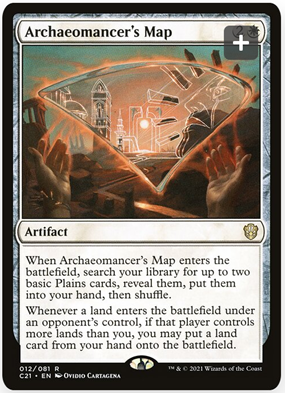 White has gotten a lot of good cards lately, but Archaeomancer’s Map was one of the first cards that started this trend. It’s a strong card that provides card draw and ramp in white – albeit conditional on its opponent’s actions. Despite being a little narrow due to its requirement of several basic plains, it has still has found a home in 8% of white EDHREC decks, with 34,000 inclusions total. The staying power of this card can be seen when contrasted with Monologue Tax from the same set, which is in half the number of decks and its price has collapsed to just a few dollars. Sales for Archaeomancer’s Map remain strong – only the affordable unlimited supply of Commander 2021 decks is holding it back which can’t last forever. Additionally, as the power of white in the color pie grows, this card could also see additional play because it will become easier to run white as a primary rather than as a support color. 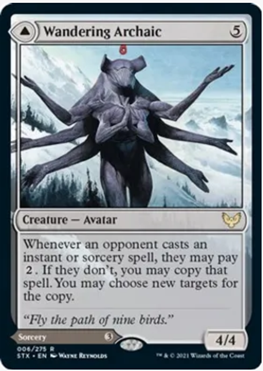 Right out of the gate, everyone believed Wandering Archaic was good and it’s launch price reflected that. For a long while, this card hovered between $6 to $7 dollars, but recently Wandering Archaic dipped to about $5, which is a significant discount from where it started. The card provides a relatively unique effect in a colorless card – something that Wizards of the Coast has publicly stated they are moving away from going forward. It’s also double sided, providing some flexibility, although no one is running it for the back half. It’s included in over 34,000 decks on EDHREC, which represents about 3% of all decks. This isn’t spectacular as a percentage, but it doesn’t need to be when the card is colorless. Supply is fairly deep due to continued mass box openings of Strixhaven by large vendors (which is surprising), so there is no rush, but once supply is cut off this card will likely rebound quickly based on its strong daily sales.