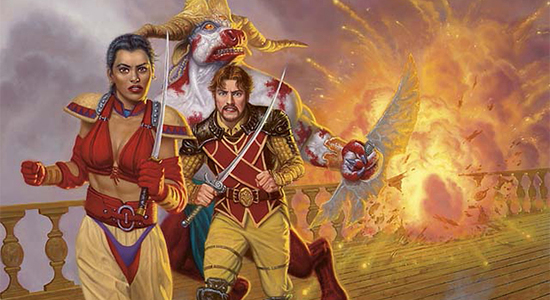 How about this week for bannings and unbannings! Gotta love when changes happen all over the place, in an apparently random way. The end result is important, though, and I think the Felidar ban is good for Standard. Shake it up!

This week, and next, I’m going to look at the currently-banned cards in a couple of formats and see what I’d like to have on hand in case of unbanning. Protean Hulk made some amazing gains when it was unbanned in Commander, and frankly, I’m looking forward to seeing how I can abuse the card in a couple of different decks.

I didn’t see the Hulk coming, but I did have a stockpile of Kokusho, the Evening Star when it got unbanned, and that was a nice play. So let’s start with Commander this week, and see what we can speculate on and what we should not get.

Power Nine: Not coming off the banned list ever, the RC is pretty clear about this. Mana Vault being legal is indeed an inconsistent application of their ‘no fast mana’ rule, but if you can get Power you should do so on general principle.

Chance of unbanning: less than 5%

Library of Alexandria: So this card is not legal, while the literally-twice-as-expensive The Tabernacle at Pendrell Vale is. I would advocate owning a Library, as it’s got nowhere to go but up. There’s a chance this gets unbanned in Commander, since lots of disgusting things are legal.

Balance: This has been banned for a long long time. If the effect was limited to creatures, it’d likely be unbanned already, but the effect on lands and hand is a very unfair and unfun experience.

Biorhythm: The RC is not big on ‘play this and win’ cards, so I don’t think Biorhythm ever gets banned. I’d like to say something like ‘Green players need to stick it to those creatureless Blue players!!’ but the truth is that G/U decks are super strong. Jerks.

Braids, Cabal Minion: This would be okay except that mana acceleration is so very good, and it’s easy to get this out early and lock the game down. If you’re locking everyone else down, go ahead and giggle, but everyone else hopes you die of paper cuts.

Coalition Victory: I feel like this should be legal, and considering the hoops that have to be jumped through, I think this has real potential to be unbanned at some point. It is a rare from a small third set (plus the Timeshifted version) and people would immediately jump on the hype. I would advocate picking some up, considering that regulars are fifty cents and foils are under $3. I get that you’re thinking ‘But it wins the game on the spot!’ and my reply would be “Look at this Reddit post and tell me Protean Hulk isn’t just as bad?”

Channel: Fast mana is not good, especially with Eldrazi running around. I don’t think this is ever unbanned.

Emrakul, the Aeons Torn: This was a sore point for a long time in the EDH community, and the banning felt inevitable. This wouldn’t get cheated into play much, but it was not terribly hard to build a deck that accelerates well to the spaghetti monster. I think it’s unlikely but possible, and its use in Modern and Legacy already has affected prices.

Erayo, Soratami Ascendant: This prevents people from doing things, and it’s in blue, so you’d likely need three spells to get rid of this. Unfun and noninteractive means it’s probably never coming back. However, it’s already at $9/$24 foil, indicating that there’s a lot of people who like this card.

Fastbond: What makes this card busted is the potential with Crucible of Worlds, paired with Strip Mine and Wasteland. The problem isn’t someone playing three lands on turn one, it’s someone paying a life to destroy a land.

Gifts Ungiven: I always forget this card is banned, but really, it needs to be. It’s super busted, to go find Time Warp, Time Stretch, Relearn, and Call to Mind. I call that the ‘Flipped Table Special’ and that’s before I get into Unburial Rites combos. It’s already at $5-$7 due to Modern and other formats, despite being in two different Modern Masters sets.

Griselbrand: Nope. Sorry. Never. Starting at 40 life and without even a ‘shuffle me from the graveyard’ clause, it’s far too good. I played with it during the short period it was legal, and it’s precisely as busted as you fear.

Karakas: It’s not that the effect is unfair, it’s how free it is being on an untapped land. A lot of Commander decks wouldn’t fold to this, but it’s so easy and free and tremendously effective.

Leovold, Emissary of Trest: I’m aware that this was designed while Tiny Leaders was hot stuff, and either ability would have been fine separately, but these two together are unfun. That said, I think he’s too expensive to spec on right now, even though I don’t think he will be banned forever.

Painter’s Servant: Originally, this was legal and Grindstone was ruled to be too good. The RC decided to switch the cards, and Grindstone is now legal. I highly doubt that this ever gets unbanned, but it’s not a zero-percent chance.

Panoptic Mirror: Cast it. End of the turn, imprint a take turns card. Defend until it’s your turn. Take all the turns. GG. Never ever, sorry.

Primeval Titan: This was a longtime battle to get banned. It’s severely powerful, and fetches up whatever you need, though most often it was Cabal Coffers and Urborg, Tomb of Yawgmoth. The presence of this card quickly becomes a battle of control and copy effects, or one person gets way far ahead on mana. This isn’t coming off anytime soon, but it’s just good enough in Modern that I wouldn’t mind having a few on hand.

Prophet of Kruphix: Oh, I want this to be unbanned. Please. Please! I’ve got a stack of these that I traded for at $1-$2 each. Infinite turns on one card is too good, though, and this card enables everything in the two best Commander colors.

That being said…I’m glad I already have my stack. This is a ridiculously good card in casual circles, and it’s at a low point in its price history.

Recurring Nightmare: This was ruled to be too good in 2008! That’s nine years of degenerate graveyard interactions. Graveyard hate has gotten much better, and the creatures have gotten far better. I have abused this in Cube and this would be much more likely to be unbanned if returning it to hand weren’t part of the cost! It’s already a $12 card, and is pretty much a Cube staple…and I want to have some of these on hand.

Rofellos, Llanowar Emissary: I don’t think he’s as big a problem in the deck as he is when he’s the commander, but he’s busted right in half.

Sway of the Stars: Resetting a Commander game is lame. There’s just no other word for it. The best way to use this is with Jhoira of the Ghitu, and suspend a couple of big things to resolve after this.

Sundering Titan: I’m going to let loose a contrarian opinion here: I think this card isn’t terribly unfair. It can only hit lands with basic types, and that skips over a lot of lands that see a lot of Commander play. Yes, it hits basics and duals and shocks, and the battle lands and the new cycling duals, but that’s it, aside from the corner cases. I know that my three-color decks aren’t dependent on those lands, enjoying checklands, manlands, filters, Temples, etc. I think there’s a chance here. It can be had for $5, $20 in pack foil or a $35 Invention. There is room for significant growth.

Sylvan Primordial: So this got banned pretty soon after it came out, and mainly because it destroys lands and then gets you more lands, enabling whatever shenanigans you’re into. You end up with one person having all their Forests out, and no one else has lands in play, once you start flickering or recurring this in some way.

That said…is it really worse than Hulk ending the game on the spot? This is a super-attractive speculation, as you can get this at nearly-bulk prices, and foils are just over $2.

Time Vault: Considering all the ways there are to take infinite turns in Commander, I’m sort of surprised this isn’t unbanned, but the RC is not known for consistency, as previously noted.

Tinker: I feel like artifact decks don’t need the help. I really don’t want Blightsteel to be in play on turn one or two.

Tolarian Academy: This isn’t allowed, but I can play other degenerate and fast artifacts? Again, I wonder if the Hulk gets out of the penalty box, there’s got to be a chance for this, right? It’s at $32 now and it would jump to at least $100 if unbanned.

Trade Secrets: So the rationale for banning this was when two players decided they wanted to draw all the cards together. That seems more like a failure of the social contract than anything else, but I think this will get re-evaluated eventually. Nearly a bulk rare, only a $3 foil.

Upheaval: I already want to kick Cyclonic Rift to the curb, and this is even worse. I won’t have anything at all in play!

Worldfire: Same as Sway of the Stars above. Just silly.

Yawgmoth’s Bargain: Academy Rector is already super annoying, and this would be neck-and-neck for the best target, alongside Omniscience. This card spiked earlier this year for reasons I can’t seem to find, but it’s on the Reserved List anyway. Having a few on hand would only be prudent.