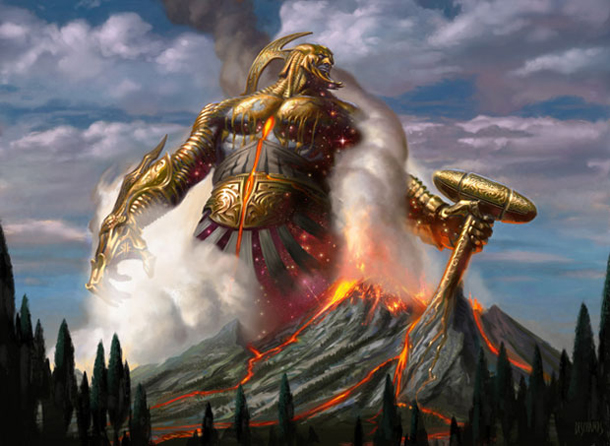 I am going to come out and say it: The five gods of Theros make terrible commanders.

I have been playing EDH for a few years now. I’ve had 15 decks at one point, though I am down to 9 now.  I have a combo deck, an all-creature deck, several tribal decks, goofy theme decks, and foiled-out goodstuff decks. Yet I can’t see myself ever making one of the five gods my general. I would be fine with adding them to some of my decks, certainly, but allow me to explain why they are not very good for what they do.

Each of the gods is cheap, I will give you that. Their static abilities have a constant effect on the game so long as they are in play, they are indestructible, and when you are properly devoted,  they can really shine.

That is precisely why they are underwhelming as a general: the devotion requirements.

Each of them adds one to your devotion. That means you are likely going to need at least two, more likely three permanents with in play. (Remember that with a God as a commander, you are restricted to a single color.) Two permanents with two of the mana symbol will get you there, and four other single-symbol permanents is the minimum.

I have an unpleasant truth for you: It is going to be the rare game where you get to attack with the God of your choice more than twice. It is too easy to wipe the board in Commander! It is not tough for your opponents to make sure the other permanents you need are not on the field. Let us not overlook how permanents such as Darksteel Forge and Blightsteel Colossus have taught EDH players the necessity of exiling or tucking (putting them on the bottom of your library,) so do not start thinking that indestructibility is truly invulnerability.

You do not want your Commander to be an accessory. Your Commander is the theme, the defining keystone of your deck. When you choose to be mono-color, you are giving up a lot of the color pie, and it needs to be a worthy tradeoff.

If one chooses to take the thematic path of Zombies, there are a range of legends to use. Thraximundar, Sedris, and Lord of Tresserhorn offer all three colors, Grimgrin is two colors of goodstuff, with Korlash, Heir to Blackblade and Balthor the Defiled providing mono-black choices. Each of those legends has an appeal and offers abilities as well as their colors. I went with Balthor because I like reanimating over and over again, but the deck would surely like to have Rhystic Study and Deadapult.

To choose one of the legendary enchantment creatures is to focus on one color, and the abilities you get for having those Gods in play are notable, but not overpowering. Erebos, God of the Dead is the best, with the card draw almost always useful and the ‘your opponents can’t gain life’ clause is often not irrelevant. He at least can refill your hand and find more gas, but you are going to be spending a lot of mana and life to get there.

Purphoros is especially frustrating, as red does not have enough ways to take advantage of his ability. Thassa gives you that unblockability and scry, but the scry is underwhelming in a format with fewer upkeeps and rampant card draw. Nylea gives your team trample and a very expensive pump effect, while Helios is basically a more expensive, indestructible Mobilization.

These are effects that you can put to very good use in Commander, don’t get me wrong. I am planning on adding several of them to assorted decks and kicking some butt. As a general, though, they are not going to be nearly as good as you want them to be.

One quick tip: If you open one of these in foil, don’t be afraid to demand a premium in trade. These are going to be highly sought-after foils, along with their weapons. The card frame in foil is gorgeous, and the casual players who love shiny are going to be clamoring for these cards, so be sure to capitalize on that during trades.