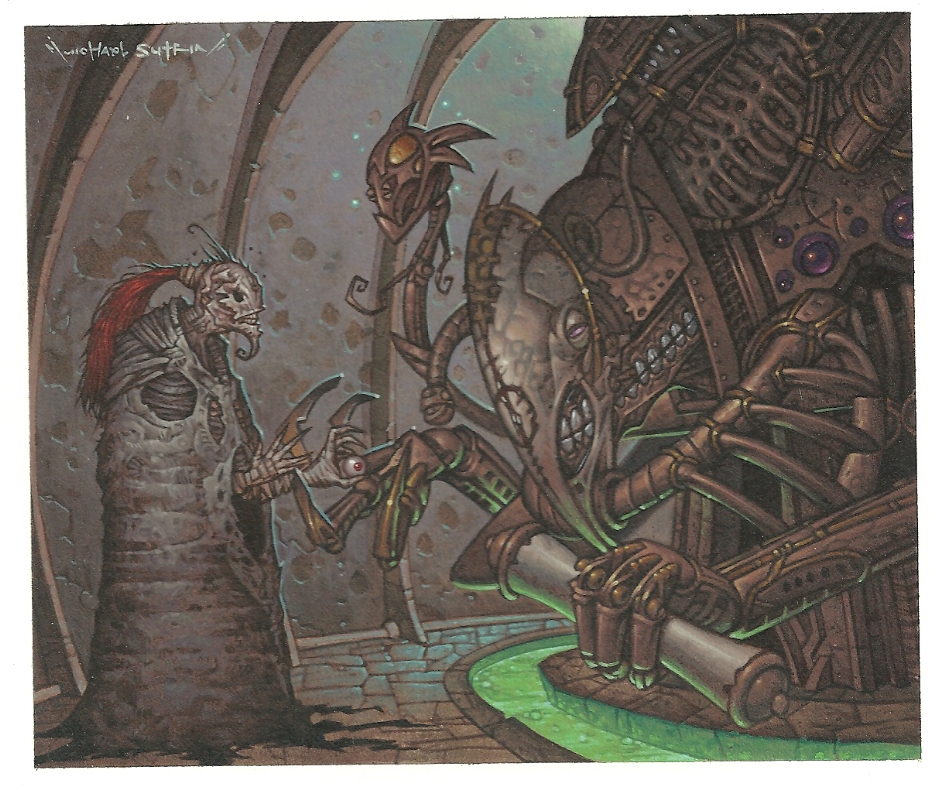 I started playing Magic in 1993 or 1994; I forget which. I was young, as most of us would have been back then. This was the era when people unironically spoke of uncles that worked for Nintendo and Sega and claimed knowledge of special cheat codes that would make the characters in Mortal Kombat strip off their clothes. We played Magic at lunch mostly. Unsleeved decks with wildly imbalanced mana:spell ratios. I’m positive the decks were of no particular size. Card selection rarely moved beyond “all my green cards and black cards.”

What was amazing about this time was the total lack of information. The term “big data” is thrown around so much at academic conferences these days that it’s become embarrassing to genuinely use the term. In 1993 though, you knew nothing beyond your local playgroup. On the rare occasion that someone somehow obtained more cards, perhaps receiving a single booster pack as part of their birthday gift, you poured over them eagerly excited to see what other pieces of this giant puzzle existed. It really was a sensation that is so difficult to capture these days. It’s probably why I enjoy Dark Souls so much. It captures much of the “I have no idea what is happening and I love it” sensation from days past.

To this day I find I carry a strong visceral reaction to certain cards. It’s difficult to describe. Leviathan is probably the single card that best captures my memories of the game. Looking at the image on magiccards.info doesn’t really do it for me. I need to hold the cardboard in my hand. Copies from The Dark work best. When I grasp that card and gaze into it, attempting to lose myself in it’s aesthetic, I experience flashes of nostalgia that I can’t get manage anywhere else. Sometimes it’s the white font against the blue background, readability not a part of the lexicon of design back then. Perhaps it’s the way the tail disappears back behind the lighthouse, perplexingly descending from the clouds in a manner incongruent with your expectations a giant sea creature. It may be the offset mana symbols due to less printing oversight or the contrast between the ancient frame and the faded black border.

Regardless of what element of the card catalyzes these flashes of buried nostalgia, I find myself drawn to the original border. It is an icon of days faded, forever imbued with character and design flaws and mystery. The new border is fine, yes. It’s cleaner, easier to read, and meshes better with advancing mechanics. But it will never have the mystique and history of the original border. Whenever people tell me they prefer the new border I always feel a little sad for them, halcyon memories of childhood inaccessible with a simple piece of cardboard.

The result of all of this is that I acquire foil old border cards wherever possible. They help capture part of the magic of Magic for me. Mixing the history of the original border with the luxury of foils is my favorite way to collect. When was the last time you saw a mint foil card from any of the old sets? They are brilliantly shiny in a way that new foils completely lack. Some of the most beautiful Magic cards in existence are old border foils. (Henceforth OBFs.)

Normally when a new set comes out I’ll scan the spoiler for reprints, see if they had an older printing, and grab foil copies where possible. Off the top of my head I’ve got full or partial sets of Lay of the Land, Ray of Revelation, Llanowar Elves, Lightning Bolt, Last Breath, Worldly Counsel, and Naturalize.

When M15 was spoiled my process was no different. As soon as I saw the painlands I took to TCGPlayer to scoop up my foil Apocalypse copies. Let me tell you, “painland” could not be more appropriate.

Oof. $30+ apiece for a land legal in Standard for a single year that I may never actually have the chance to put into play. The worst part of this is that they aren’t getting any cheaper. Ever.

Possibly the most rock-solid place to invest your MTG funbux are OBFs. They may not rise quickly or often, but it is virtually impossible for them to get cheaper. No matter the card, copies will be limited by today’s standards. If they’re reprinted, the new copies will be in a different border, placing no strain on the original copies. Heck, as we can see with the painlands, reprinting of old cards actually makes the foils rise. Suddenly those foil Apocalypse Battlefield Forges that were listed at $6 forever are Standard legal and worth $20+ apiece.

Demand for OBFs is not rooted in playability, but collectability and luxury. People collect them because they’re beautiful and original and unique, not because they need them to play a tournament. M11 Lightning Bolts are a buck. The only OBF of the card is $250. This is really what makes them the bastion of value that they are. It would be incredibly difficult for Wizards to print something that would devalue these cards. You think the Onslaught foils of Flooded Strand and Polluted Delta are expensive now? Wait until they show up in a fall set.

All of this leads to a simple but painful conclusion. The best time to buy an OBF is now. Whether you’re reading that sentence on 7/23/14 when this article goes live or three years down the road in 2017, it is still accurate. This conclusion is painful because many of these cards are already astronomically expensive. Those ONS foil Flooded Strands are $300, but the fact of the matter is that they aren’t getting cheaper. If you want them, acquire them sooner than later. This time next year one of two things will be true. They’ll either still be $300, or they’ll be $500+ because they were announced for the fall set. The one thing that won’t happen is that they’ll be less than they are today. Maybe you’ll be in better economic standings next year so you decide to wait, but just remember that you’re playing chicken with a train that you can’t see coming.

The absolute best place to go of course is actual reserve list OBFs. Reserve list cards are already gold, and grabbing OBFs – of which by my quick and almost assuredly inaccurate count there are under thirty – is icing on the cake. Just start at the end of this list and work your way backwards. What are some of the best choices?

Rofellos, Llanowar Emissary – Absurdly powerful legendary creature in one of the most popular tribes of all time? Can’t go wrong.

Deranged Hermit – Possibly the wackiest OBF on the reserve list. He’s the godfather of a silly beloved tribe that will always have a place in the heart of a subset of players.

Old border foils are some of the most visually striking and iconic cards in the game. Their supply is miniature and chances of price surges reasonable. If reprinted they will gain value, not lose it.The worst case scenario for any of them is that Wizards reprints them in the original border ala Timeshifted cards, but even in that case it would merely slow their growth, not decrease their value. If you’re like me and you love the look of old border foils, now is the time to start buying. It’s painful, but it’s only going to get worse.