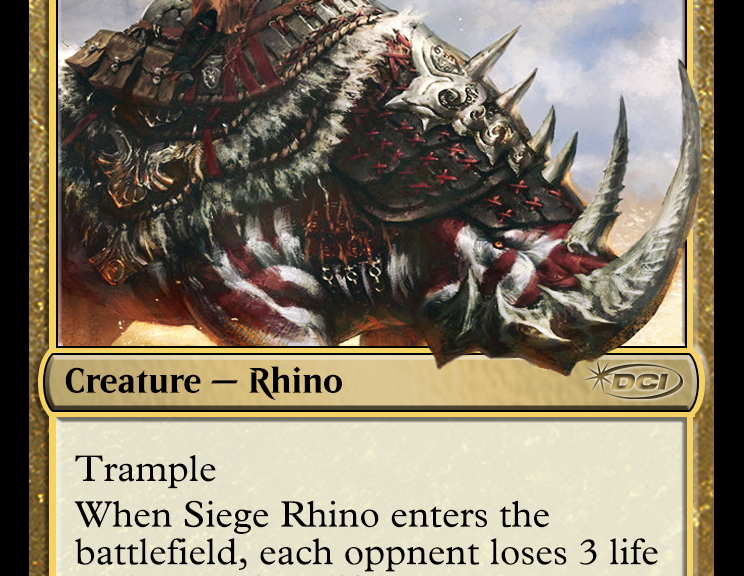 Day 1 of Pro Tour Khans of Tarkir featured 3 fascinating rounds of draft, followed by 5 highly varied and exciting rounds of standard action. So far the field is strongly diversified but at the end of the standard rounds, the theme was clear: Jeskai and Abzan own this tournament. Mardu Planeswalkers, Green Devotion and G/B Constellation builds also still have a shot, but it’s the Ascendancy and Siege Rhino decks that need to be overcome on Day 2 to win through.

See all of our Day 1 coverage here.

Let’s check in on our noteable cards to see how they’re doing:

If there is a break out card this weekend so far, this is it. Jumping this week from $3-4, to as high as $17/copy Friday night, it’s now running in our predicted $10-12 range. A future in Modern and Legacy will only help ensure that this card locks into the top 10 cards of the KTK for the foreseeable future.

It’s unprecedented. A tri-color rare combo piece that is seeing widespread play in Aggro, Tempo/Burn and Combo decks all in the same format! That flexibility, manifesting with Jeskai as the highest percentage (20%) of the field, along with a couple of Turn 4 kills on camera Friday night, has pushed the card up towards $10 overnight. If it shows up in 2-4 decks in the Top 8 it should easily hold that price until the meta shifts. In at $3, I’m already a seller at these levels, holding back a playset for standard use.

With Mardu showing up as the 2nd most played deck of the tournament, Sarkhan seems relatively secure in his role as the most expensive card from Khans of Tarkir. Missing Day 3 could result in a $5-10 slide, but a Top 8 finish should further cement bid red on the throne.

Sorin is an early success story at this tournament, showing up in both Mardu and Abzan decks and making a strong case for an upswing towards $30. If Sigrist makes Top 8 with his Abzan deck (and it looks very possible), Sorin should top $30 with room for growth.

Largely overlooked up to this point, the Aggro Abzan build needs this guy as a phenomenal 2-drop in place of the eschewed Sylvan Caryatid. Speaking of Sylvan, I’m a seller above $15 at this point, unless a green ramp/devotion deck playing the card makes Top8.

This bulk mythic is now on deck for gains, showing up as the finisher of choice alongside Prognostic Sphinx in U/B control decks. Hype is still low, so a top finish is necessary to pull this up to the $3-4 range where getting in around $1 would be seen as worthwhile.

This casual favorite did show up in the sideboards of the U/B Control builds run by Pantheon and others, but failed to gain any strong camera time. Current price level should stay steady.

The Hornet Queen is all over the tournament acting as the finisher of choice in multiple devotion decks. Playsets are running $20-$26 this weekend, and there is room for growth on par with Rabblemaster if it makes Top 8 in multiples.

They’re in play at every table, but very few decks are running more than 4-6 copies. I’m calling these to fall further on schedule, down below $15 by the holidays.

The Rabblemaster is showing up in force, but with so much recent growth, it will need a Top 8 showing to avoid a possible slideback in price. I’m a seller at current levels, happily reinvesting in other options.

It’s getting played in Abzan and Mardu decks in as many as 4 copies. A strong Top 8 showing could see it push over $16 from the current $10-12.

Sigrist called it out Friday night as the “best card, no contest” in his 5-0 Abzan Aggro build. If it makes the top tables, expect a bump towards $10.