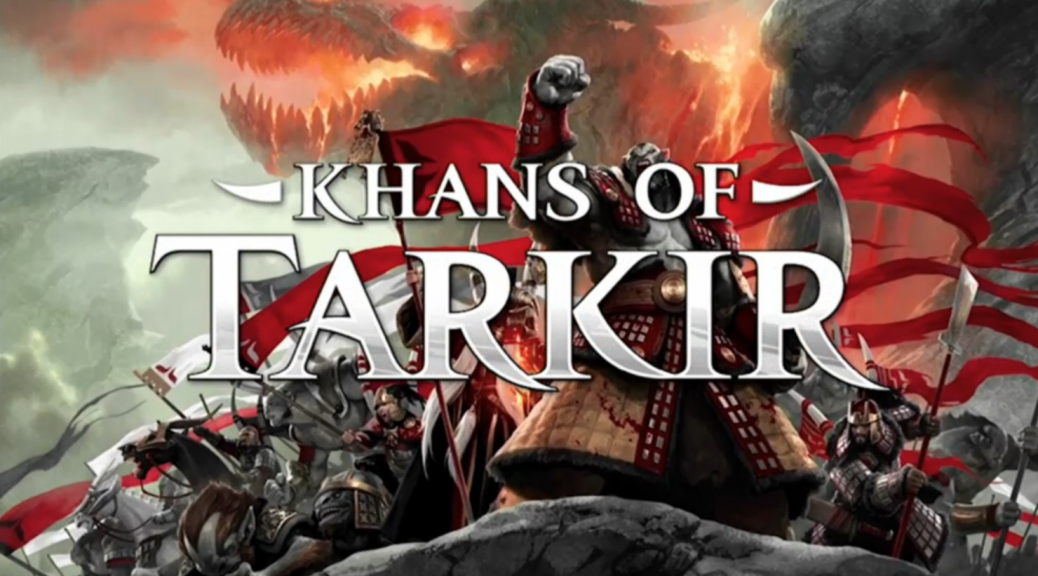 So here we are.

6 weeks of hype, pre-release and release events, early results from SCG and State Championships all culminate this weekend at Pro Tour: Khans of Tarkir. The mixed format event started this afternoon with 3 rounds of Booster Draft and wraps up with the

With the Estimated Value of Khans of Tarkir Booster Boxes currently sitting around $140USD (most fall sets should end up between $100-$110), the results of the Standard portion of this Pro Tour are likely to result in the ascendancy and downfall of a larger than usual swath of cards. All eyes are on the 5 rounds of standard playing out between 8pm and 1:30am tonight to see what the key teams like Channel Fireball, SCG and the Japanese powerhouse squads bring to the top tables.

Early word from the tournament seems to indicate a wide open field, with no major clues that anyone has “solved” the format. In such a scenario consistency and great play should rule the day, so it will be fascinating to see what rises to the top and sets up a fresh round of buy and sell signals.

For Magic speculators, the weekend will be an especially important proving grounds for many of the most hyped cards of the format. Here are some early stories to be paying attention to:

First folks thought he would replace Stormbreath Dragon. Then we thought the Dragon might be better. Then we thought we’d play both. Either way, he’s managed a reasonable number of showings in early tournaments and is propped up as the Elspeth of Fall 2014. Currently available around $35 online and $50 retail, he stands to lose the most if he doesn’t make the top tables this weekend. Hype and casual interest could still easily keep above $25, but I’m selling into hype at $35 with confidence, looking to enter lower later this season.

So far Sorin, doesn’t have an obvious deck likely to make top tables and as such, could be headed to a $15 price point. A good showing could reverse that trend.

Originally pre-ordering close to $20, we have basically no indication that this is a major player in standard so far, and nothing short of a top table appearance in multiples will prop it back up.

She was vastly underestimated in her first 8 weeks of release, with plenty of us picking up unlimited copies under a dollar.  Since Monday I’ve gone from selling $10 sets with a smile to selling $25 sets with a shit-eating grin and plenty of MTGFinance types think a good showing this weekend in Green Devotion and Reanimator decks this weekend could push her over $10/copy like her set cousin the Rabblemaster.

A lot of the focus has been on Treasure Cruise as the most broken draw spell since Ancestral Visions, but as a rare it’s actually Dig Through Time that may have the most financial relevance this fall. A broad showing this weekend in control or tempo decks could push the card over $10, at which point I’d be selling into that hype.

They’re clearly some of the best lands of all time, but so far they haven’t made a huge splash in Standard, with relatively few decks running full sets. The early dominance of Courser of Kruphix and his excellent interactions with Fetchlands certainly balances the lack of Ravnica duals to fetch for, but the collapse of Khans EV should still begin with these lands moving down towards the $10-14 range from their current $15-20 range. Only a ton of decks running multiple playsets of 4 will have any chance of keeping prices to the higher side of the downhill range as we move deeper into the season.

He’s already proved his mettle in everything from Aggro Red to Jeskai Temp and R/G Monsters builds and he’s earned his crown as the top rare from M15. The question is whether the metagame will now warp around him to ensure his token aggro driven strategy is nullified. A top 8 will keep him high. Missing that stage, could see him slide back $3-5 so it’s worth watching.

First we hated it. A bad Broodmate Dragon they said. Then he started showing up as a great value play and potential finisher in a few different decks and he’s a clear candidate for breakout card of the weekend. As a mythic currently sitting around $13, and with an MTGO run-up this week of ~40%, there are plenty of eyes wondering if this powerful flyer can hit $20+.

It’s been trending down, and could easily move towards bulk unless an Abzan mid-range deck puts this powerful beater to work holding off red and black based aggro decks.