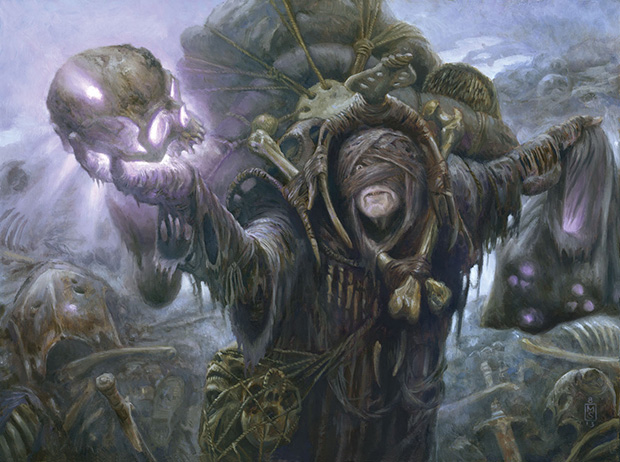 So when Magic 2015 was spoiled, I told you all some long–term price behaviors that I expected to see over time. A week after that, I checked in with those cards. With Khans having been out for a month and M15 being a format that almost no one is drafting, let’s see where these cards are at.

I like to check in with how those predictions are going, and evaluate what’s been good and bad. This is the process: No one is right 100% of the time, but there’s lessons to be learned from the successes and the failures.

Ajani Steadfast – I said to pick up at $5 or less, and he’s at $13 after a high of $20. He’s on the trajectory. I do like him as a casual pickup for the decks with lots of planeswalkers…once he gets to a low enough point. He has seen a little Standard play, and that might be enough to keep him near $10.

Garruk, Apex Predator – My goal is going to be to pick him up at $10, but he’s currently at $15. I think I’m going to revise this a bit: I like picking him up at $15, because he seems like something to evaluate in Abzan decks. He’ll never be a four-of, but showing up in a few sideboards might nudge his price back north of $20. If that happens, the spike might be big, because casual players have already taken a lot of these out of rotation.

Jace, the Living Guildpact – Sultai is not a popular enough clan to warrant playing him. His price looks like it will continue to drop, despite a ‘discard opponent’s hand while you draw seven’ ultimate. We’re seeing lots of Murderous Cut and Dig Through Time, but the one card is just too slow. I had higher hopes for him.

Liliana Vess – Current card seeing a little play, with lots and lots of printings behind her. I’d be surprised if she fell much further (She is a 1-2 of even when played) or rose much higher (There’s a ton of back product, all the way back to being a Lorwyn rare) so there’s little value to be gained here currently. Totally in line with expectations.

Nissa, Worldwaker – Well, I was wrong. Very wrong. I said “I do not expect big things out of her price” and it turns out she’s the heavy hitter of the set. She’s more than twice the price of her nearest competition! This is because she was the most popular upon release, combined with a never-very-large inventory. Her price is going to stay high for the duration of her time in Standard, because of the high initial price and the memory of that. I would be surprised if her price went below $25 before the end of next summer.

Perilous Vault – I said I’d like this card below $10, and here it is. It’s been all the way down to $4, before seeing play at the PT and the GP. I maintain that it is an excellent casual card, but seeing the level it can get to, I think I’m going to be very patient and wait till rotation, picking these up under $5.

Sliver Hivelord – I said it would get to about $7 as people got their single copy for Sliver EDH decks, and here we are at $7 and change. It had a chance to be a player in Standard over the summer, but with rotation, it’s a casual-only card and one that won’t go up for a while.

The Soul Cycle – Soul of New Phyrexia is indeed about double the others, and has gotten to half its previous price of $10. The benefit to this Soul is that it’ll go into any casual deck. I feel it’s even good enough for Cube, as untapping with it invalidates so many strategies! Soul of Innistrad has a chance to go up, as a millable source of card advantage, but the rest seem destined to fall to near-bulk prices.

The Chain Veil – I was too optimistic. I knew it wouldn’t be much, but while I said it would be closer to $4 than $10, I didn’t see it being a buck. Just too specialized. Notable, though, that the foils are all the way at $11, a classic indicator of a card’s casual appeal.

Ob Nixilis, Unshackled – I said it would never be more than a couple of dollars, and here it is at $1.50. I do have to report that it’s just as good in Commander as I had hoped!

Scuttling Doom Engine – This is interesting. It’s $4 despite getting no publicized play. Maybe it’s a big card in rogue brews. Maybe it’s an easy addition to all sorts of casual artifact decks. Maybe someone is stockpiling them in anticipation of the world figuring out that this was printed as the anti-Elspeth card. I thought it would be lower than it is, so I haven’t tried to trade for any yet.

Urborg, Tomb of Yawgmoth – It’s seeing professional-level play, so the power is there. The Abzan decks especially like it, allowing fetchlands and Temple of Plenty to tap for black. Not to be overlooked is the damage it saves from painlands as well. It’s going to hold at $5 for a while and start creeping upwards over time. I plan on trading for some of these and just setting them aside for a long while.

Waste Not – I told you to dump it at $7, saying it was a $2 card. I was dead on, as it’s at $2.32. It will take a powerhouse discard spell to bring it into Standard play, and if the card is good enough for Standard, it won’t need this to help it out.

Hushwing Gryff – It hasn’t really moved from being $3. Siege Rhino only sort of cares if someone played this against you on turn four. Satyr Wayfinder gets in play before the Gryff. There are some neat abilities to counter, but this is more a Commander card.

What was I most wrong about? Nissa. I underestimated her immediate effect on Standard. I overestimated the supply. She will be a somewhat-played card for her duration. Never too heavily, mind you, but she will show up. There is a case to be made that the more Siege Rhino is played, the worse a 4/4 trample land looks. Time will tell!

The other thing to note is that M15 has very low-value cards. It’s not as bad as Dragon’s Maze, with one big find and everything else just sort of there, but with only four cards over $10, one of the best values in M15 will be Stoke the Flames, a surprise uncommon. The lesson there is that four damage is good, especially when your creatures help you pay for it.