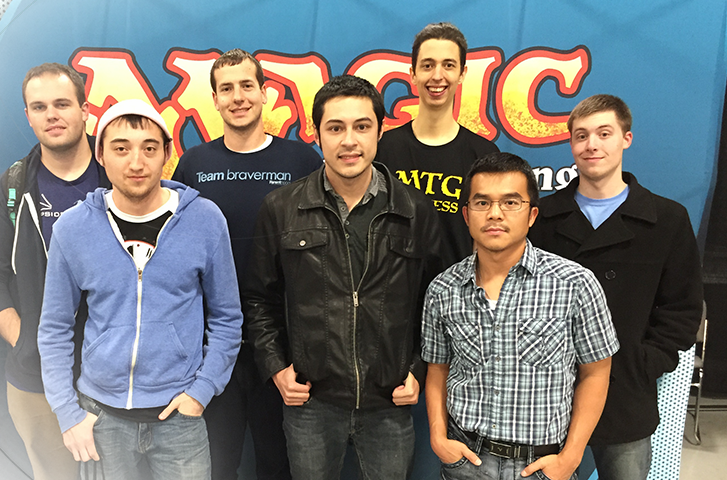 It’s been an absolutely epic weekend over in the Garden State industrial park, and having played 14 rounds of Legacy this weekend I can assure you that the format is anything but stale.

With something like 50+ viable decks in the format, 20 of which have made a prominent Top 16 in the last six weeks, it’s hard to imagine a format that rewards practice, research and skill more than Legacy. And despite the perception that older formats tend to feature slower paced metagame shifts, Grand Prix New Jersey will surely be most remembered for the dominance of Treasure Cruise and it’s metagame warping influence.

It should come as no surprise then, that the finals of the tournament found familiar faces Brian Braun-Duin and Tom “The Boss” Ross in the hot seat, battling it out for a few thousand bucks. SCG personality BBD was on Jeskai/StoneForge Mystic and managed to take the trophy after a few hard fought games.

Despite only using one in the sideboard, Tom’s use of Become Immense to deal massive finishing blows through his enraged poison creatures has me checking on foreign foil prices.

Sum-total these are the decks that made it to the Top 8 at the largest Legacy tournament of all time:

Fellow Torontonian Lam Phan ran against the headwinds this weekend, running just a single copy of Treasure Cruise as a junior partner to 3 Standstills, a card I also considered maindecking in Slivers due to it’s non-graveyard card draw powers. This innovative brew also featured 3 Snapcaster Mage and 4 Stifle, in a field where many folks left both on the sidelines. He also ran 3 Sudden Shock, which was also on my recent card test list and which Phan used to great effect all weekend taking down the plethora of vulnerable 2-toughness or less creatures without fear of counterspells.

Now most of these decks were running the expected cards, and though Jeskai Miracles and Stoneblade variants splashing red to fight the parade of U/R Delver decks are clearly excellent metagame choices, they don’t leave much fresh juice on the table for us MTGFinance types. For that you have to look deeper down the tables for the Titania, Protector of Argoth(!) and Trinisphere to try and shut down down the Delver builds with serious style. (Deck list coming asap). Seems as though Containment Priest might not be the only C14 card to make a strong legacy splash.

Chalice of the Void was also in mass attendance, with many players realizing that shutting down spells that cost 1 on Turn 2 had a chance of countering 30+ possible spells/game. Zach Dobbin was granted an SCG Dech Tech for his sweet Helmerator brew making use of both Chalice and Ensnaring Bridge alongside the unheralded Transmute Artifact.

On Sunday I even experimented with removing the Daze/Force package from my Slivers deck entirely, instead running 4 Chalice of the Void, a Tormod’s Crypt and a sideboarded Masterwork of Ingenuity to achieve cheap parity against the plethora of decks running Batterskull and Umezawa’s Jitte.

The MUD decks seem to be on an upswing and that deck is full of forgotten powerful artifacts that may find some gentle upside price pressure if the deck gains more popularity, including: Trinisphere, Metalworker, Steel Hellkite, Witchbane Orb and Bottled Cloister.

With GPNJ in the bag, I’m heading home tired and excited by a lively and intelligent Legacy format that seems destined to just keep getting better. Oh, and did I mention that I unlocked the achievement, trading up into a Black Lotus in just over the 1-year goal I set. More on that later this week as we break down the anatomy of a super-deal….