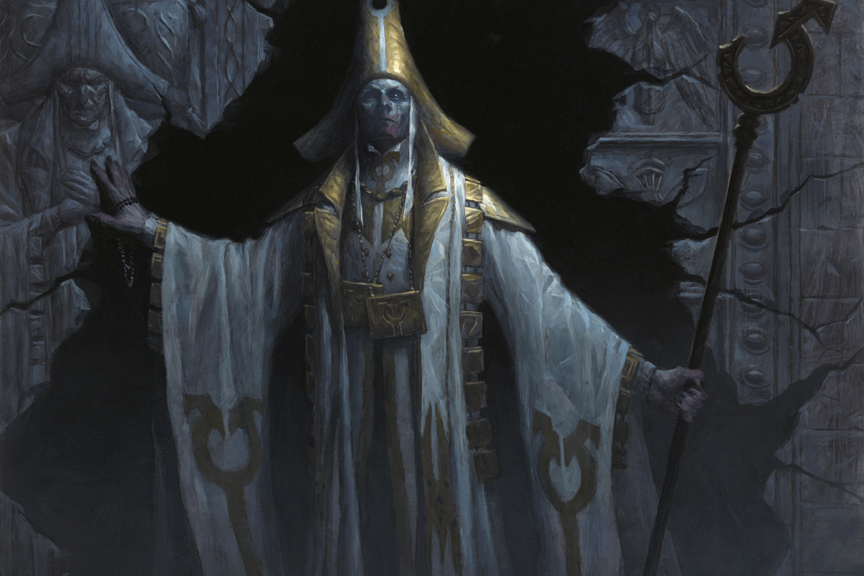 With Commander 2014 being a month old, it’s time to take a look at the five decks, and see if there’s something to be anticipated this time around. Last year, there was a series of spikes around cards that went well with Nekusar, the Mindrazer. Since that was a new legend who came with the chase card (True-Name Nemesis) I want to follow that lead.

Containment Priest is currently the priciest card, thanks to her spike during the Legacy GP. So what’s in the white deck and what might we make money on? There’s two themes: Equipment and Tokens.

On the equipment side, I like a few things: First, foil copies of Taj-Nar Swordsmith can be had for $1 or less. It’s much easier to recur a creature than to get back a sorcery in an all-white deck, though the Gift is a $3 uncommon that could go way up. Steelshaper Apprentice is slow, yes, unless the first equipment you tutor up is Lightning Greaves!

Stoneforge Mystic is also good but she’s too expensive for a useful spec right now. She’s going to get reprinted before too long. Stonehewer Giant was just in Modern Masters and can be had for about $2, with foils going for between $7-12, depending on edition.

The token theme is harder to spot. My favorite two, though, are Twilight Drover (two printings, about $1) and Custodi Soulbinders from Conspiracy. Sure, you can have Geist-Honored Monk or others, but I like cards that offer a backup plan.

The red deck offers three valuable cards: Daretti, Scrap Savant, Wurmcoil Engine, and Dualcaster Mage. The legends of Feldon of the Third Path and Bosh, Iron Golem make is clear that this deck is all about artifacts coming and going from and to the graveyard. Kuldotha Forgemaster has already crept up a little in value, but what else might?

I like Precursor Golem to give me Golem tokens, Genesis Chamber, Myr Battlesphere, Myr Matrix, Myr Turbine for lots of Myr, Pentavus for value, and Urza’s Factory for the long games.

Summoning Station is the secret tech for this deck, though. Artifacts are cycling from play to the graveyard like crazy and you want to get some bonuses. I would also watch Darksteel Forge. Though there’s three printings of it, it’s an effect that is very good at keeping your things in play once you get them there.

The green deck is all about lands and Elves. I don’t think that an Elf deck has much room to grow, but a lot of the less-common elves got a new printing, like Priest of Titania. I think that Elvish Promenade and Jagged-Scar Archers are the ones to watch. They are Lorwyn uncommons, so there’s not that many out there by modern standards. The Duels promos are not a large enough amount to matter too much.

Titania as a legend offers some interesting designs. You want to sacrifice lands and get value. I think Life from the Loam is the biggest potential gainer from this build, and it’s had just enough reprinting that it could go up a couple of dollars. Crucible of Worlds won’t go up too much, but that’s gold for a deck built around sacrificing lands.

Other cards to watch: Dust Bowl, Constant Mists, Crop Rotation, Zuran Orb, Scapeshift, Rath’s Edge, Lotus Vale, Scorched Ruins, Petrified Field. These all sacrifice lands to gain benefit, which when Titania is out, gives you some 5/3 Elemental action too.

Also consider that Doubling Season will party like a rock star in this deck, as will Parallel Lives and other token-doublers like Parallel Evolution.

I also like Terminal Moraine and Myriad Landscape in this deck, but I don’t think those prices would grow very much.

In the blue deck, we have Teferi, Temporal Archmage and Stitcher Geralf. Those builds could go a lot of ways, but there’s a strong card-draw theme in the blue deck and so I have two suggestions: Jin-Gitaxias, Core Augur to maximize your card drawing and Psychosis Crawler.

The Crawler is so amazingly good in a lot of decks, but there are extra foil versions out there, since it was the foil included in one of the Mirrodin Besieged intro packs.

Finally, Ob Nixilis’s deck. Ghoulcaller Gisa offers a very straightforward ‘Zombie horde’ strategy, and Ob Nixilis offers a repeatable method for draining/gaining life. I would look out for the re-rise of the Exquisite Blood/Sanguine Bond combo with Ob Nixilis.

My favorite card to add to a Gisa deck would easily be Endless Ranks of the Dead. If Gisa gets you two Zombies, this adds a third. The growth chart gets really crazy from there up. Gempalm Polluter is good, and Gravecrawler might be the perfect card to sacrifice to Gisa. Also watch out for Mikaeus, the Unhallowed, as he enables a lot of shenanigans.

Shepherd of Rot is pretty amazing at what it does, and combined with Gutless Ghoul and some Gisa activations, you can do a lot of work. If Gisa makes a few tokens, the sky is the limit. Door of Destinies in a tribal deck, Obelisk of Urd or Coat of Arms if you just want to grow a horde. Stronghold Assassin is very strong, and in a multicolored deck, Deadapult is the best combination of name, ability, and flavor ever!

From this list, I’d say that Steelshaper’s Gift is the most likely to spike. I think Darksteel Forge won’t be far behind. I’ve tried to outline a range of options, though, so if you see these in someone’s binder at FNM, feel free to pick up a few spares.