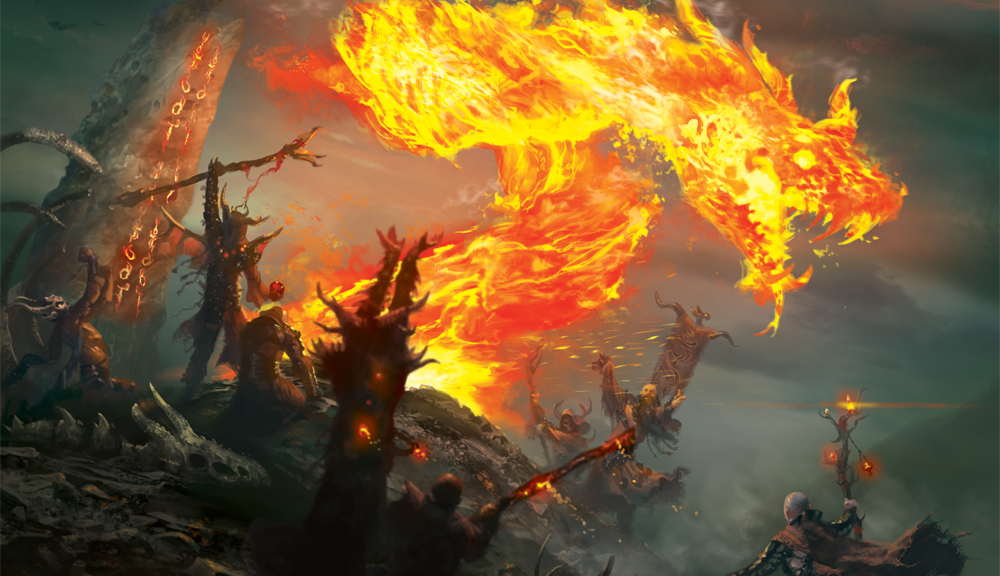 It’s the end of the year, and while rotation for what’s currently legal is more than nine months away, I want to be thinking about what to keep and what to move.

I’m comfortable getting out of a card if the value has gone up and I can get my profit, either in cash or in trade. I’m not going to sweat Standard cards gaining a little more, I’d rather keep hitting my singles and doubles than always swinging for the fences.

The cards I want to trade or sell right now are cards that are going to lose value at rotation, and I want to be ahead of that trend. I might keep a playset for decks (these are good cards after all) but these are cards that are not seeing enough Modern/Legacy play to justify holding their price in a few months. These cards are at their peak value, or already trending down from the peak, and I don’t want to wait until they hit the floor.

Just a heads-up: These are going to look a lot like some lists from earlier this year, about things to trade for.

I told anyone who would listen to get in at $5 and now I’m telling you to get out at anything like $10. It is a fantastically versatile spell, with no restrictions or problems, aside from costing three mana, and double black at that. It’s not good enough for eternal formats and you should not be keeping yours much longer.

There is a chance that this card makes it to $12 or $13 if a series of decks win with it, but it’s already in very wide use. Simply put, there’s a lot in circulation even as there are a lot of decks using it. It’s the 5th most valuable card in Theros, and will not stay there forever. In fact, it’s already started to decline to $9, and it might go lower. Get out now.

It’s played in less decks but it’s a very good card in a range of strategies. It’s also a mythic, as compared to a rare. This dragon is good enough to be featured in assorted casual decks, but the price trajectory is more like Thundermaw Hellkite. I’ll be expecting this to drop to under $10 as rotation approaches.

If you have any spares, get out soon. Her Duel Deck is landing in late February, which is when thoughts of rotation start appearing all over, and you want to be ahead of that trend. I think her price will get to $15-$20 even at that point, and may even hit $10 at rotation, which is when I’d want to pick her up. Elspeth’s third card is outstanding in a range of casual decks (Soldiers, tokens, planeswalkers) and getting her at her lowest is going to be a winner.

It’s seeing a little Modern play in Jeskai Ascendancy combo decks, but not enough to stay at $10, especially with a Buy-A-Box promo version out there. Keep your playset for your deck, and move the rest.

Everything that is true of Elspeth is true of her, except that she sees far less play. Her abilities are also much harder to use in Commander games, so I have trouble seeing her getting any higher in price than she is now.

This is seeing some Modern play and I find that intriguing, especially in a Scapeshift list. It’s $12 now, despite being in the Clash Pack, and I don’t expect it will dip very far even at rotation. It’s very good in casual green decks that want to keep the land flowing, though it won’t compete with Oracle of Mul Daya for value. Still, I’d move it out now and take the profit, instead of holding it and hoping.

The temples pop up occasionally in Modern decks and never as a four-of. Malady is the most expensive right now at $12, a price which is mostly due to the relative scarcity of the set it was in. All of the temples are likely to drop at rotation, as they are just too slow for the Eternal formats.

The most expensive by far of the Gods at $15, Keranos is a fun singleton in a lot of Modern sideboards. It’s all for his ability, not the creature side. While I do think that this will keep making appearances in sideboards, I think his price will settle to around $10.

I don’t argue the power of her 4/4 land ability, but I also don’t think her $25 price tag will stay much longer. It’s been on a steady decline for the last couple of months as she’s seen fringe play in Standard: 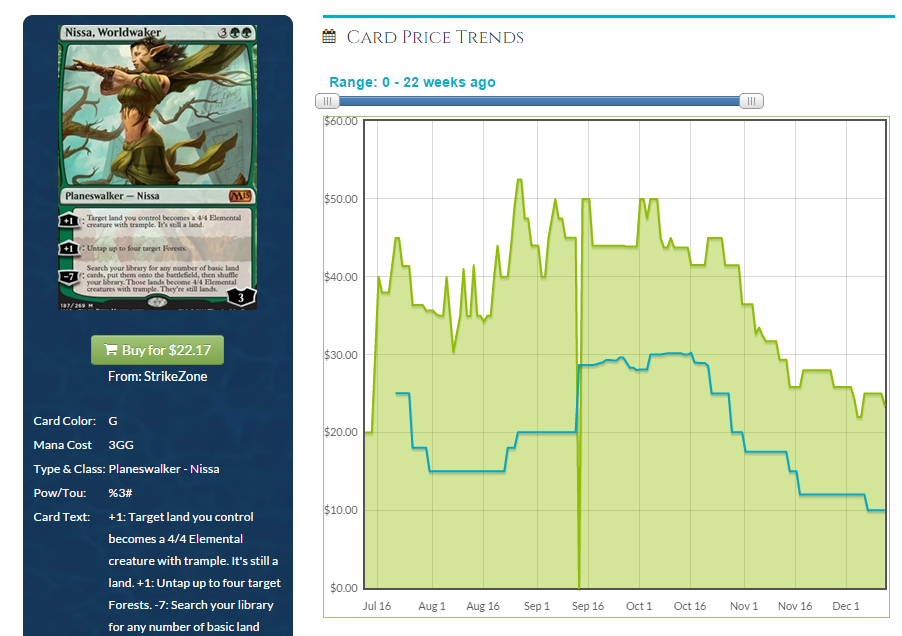 I have trouble seeing her price as going up, since she’s five mana and is an awkward draw in multiples. Most of the decks she’s used in have her as a one-of in the sideboard, which makes her price trajectory even sadder.

I admit, I thought this was a player in Modern, given how ubiquitous it is in Standard decks that play red. But the numbers simply aren’t there yet, so while this might find a home in Modern, for now, it’s time to back away from him. When this rotates, it’ll drop to $7 or so, and that might be a better pickup. Remember that this was the Buy-a-Box promo, and that adds price pressure to the casual appeal.

Speaking of not-quite-good-enough-for-Modern! This is an uncommon at $5, because it’s really good with creatures and cards like Hordeling Outburst. Stoke is all over the place in Standard, but hasn’t made a Modern impact. It seems unlikely to, given the one- and two-mana spells that deal three damage. Four mana to deal four damage seems unlikely, even with a discount available. Warleader’s Helix has seen more play in Modern so far. I would not be sitting on any spare copies of this right now.

You might disagree with me about wanting to get out of these cards right now. I would understand if you wanted to wait, maybe to trade these for Fate Reforged goodies. I’m warning you, though, that the longer you wait, the worse it might go. The drop at rotation is happening earlier and earlier, so I’m trying to be ahead of the curve.

11 thoughts on “At Their Peak”