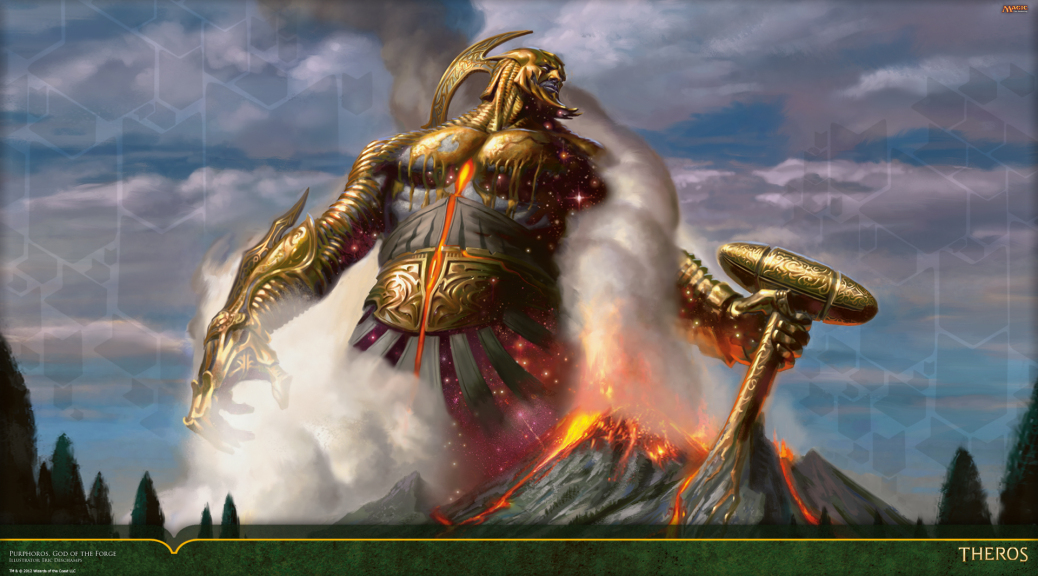 First and foremost, I have to apologise to you readers and my editors for the late publication of this article. I am currently in Tokyo with intermittent internet access. With that out of the way, let’s dive into a topic that is close to my heart: foreign language foils.

Foreign language cards and foils never used to catch my interest. I delegated them to the realms of hardcore Commander, Legacy and Modern players with wallets thicker than their decks.

Then on one fine day, my girlfriend brought back two boxes of Korean Theros from her trip to South Korea, and I opened this in one of the boxes:

Oh my, it looked gorgeous. I grew up speaking English, Malay and Cantonese but I only wrote in English and Malay, which also used Roman alphabets. The Korean script read to me like ancient runes, fittingly on a card that summons a god, and it looked absolutely fascinating in foil. After going through two boxes of Korean Theros, I started to find myself with a thirst for foils in scripts intelligible to myself.

The Tiers of Foreign Cards

One of the first thing every foreign language cardphile learns is the rarity tier of languages and their corresponding price multipliers. This would be exceedingly familiar to many of you, and countless articles have been written about the topic, so I am going to quickly skimp through it for the new entrants and the uninitiated.

English cards are the baseline, being the default language of Magic cards. The European languages, French, Italian and Spanish have a similar or lower valuation in relative to their English counterparts. From my own experience, when I was living in London Spanish, Italian and French cards were valued slightly lower than their English counterparts, both on player-to-player trading and on magiccardmarket.eu, and for both non-foils and foils including eternal staples like Thoughtseize. German is the only exception; some cards have awesome, punny and sometimes politically incorrect names in German: 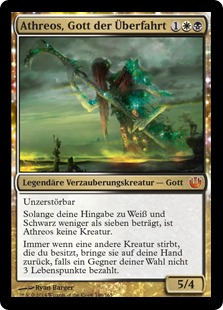 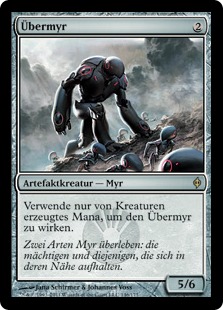 However, back in Malaysia, most European language cards command a higher price than English cards. A rule of thumb for valuing non ‘tier one’ foreign language cards and foils is that they are only worth the amount your trade partner is willing to pay for them.

The cheapest of the tier one languages is Japanese, considered to be the third most expensive but most accessible of foreign language cards due to the fact that most LGSes worldwide have Japanese booster allocations.  Big Japanese stores like Saito Card Shop also have an English-friendly online presence with a large Japanese non-foil and foil inventory making it easier for anyone around the world to acquire Japanese singles.

The top two rarest languages are Korean and Russian. While most local game stores have a small allocation of Korean and Russian boxes, most stores do not stock them unless requested, or the stocks fly right off the shelves if there are demand for them due to the small allocation. Buying Korean and Russian singles online are  much harder. I tried looking for an online venue to purchase Korean singles to little avail. Even the large Korean Magic: the Gathering stores recommended to me by a Korean friend do not have English websites and Google Translate was horrible at it, especially when I tried to use the search function. I have not done as much research for Russian singles sites but a quick search did not yield any website in English.

The only way to acquire Korean or Russian boxes en masse would be to be in South Korea or Russia yourself, or hope that your LGS stocks them or is willing to order them for you using whatever limited allocation Wizards gave them.

Non-foil foreign language Japanese, Korean and Russian cards are only slightly more expensive than their non-foil English counterparts, even for eternal staples. As of writing, Korean Thoughtseizes are going for just about $10 more than an English one. The Japanese store I visited were selling Japanese Polluted Delta for 1950 – 2000 yen, which is just $4 – $5 more than an English one.

The foreign language price multiplier gets insane when you look at foil eternal staples, even those currently being opened. The Japanese stores I visited were selling foil Japanese Polluted Delta for 20, 000 yen, which translates into roughly $170. Completed listings on eBay for Korean foil Polluted Delta showed winning bids at around $320. The last sold Russian Polluted Delta on eBay went for slightly higher than $1000.

Foreign non-foils are pretty easy to price, the tier one languages are usually a few dollars more than English versions. Pricing foreign foils is a more arduous task.

The first thing I did after cracking foil Korean Purphoros was to check if I have struck gold.  While I easily looked up the prices for my English foils on MTGPrice.com, attempting to pin a value on foreign cards required more digging, and the fact that Korean was the second rarest language made it felt like trudging through a wild west of card price. When I first looked up on completed sales of foil Korean Purphoros, God of the Forge on eBay, I was estatic to see one sold for $120, which was six times the price of a foil English Purphoros, God of the Forge at that time (January 2014). A few months later, a Korean-based seller was relisting a foil Korean Purphoros for $80 multiple times and no one bought it.

Japanese cards are easier to price thanks to Saito’s Card Shop.  Without any English-friendly online Korean or Russian stores to check for prices (and assuming that like me, you do not speak Korean or Russian), your best bet would be either eBay or the High End Magic Stuff for Sale Facebook Group. While eBay shows you the price at which a card was sold at, it is not often that you can find a card you are looking for and eBay archives old listings, making it more difficult to research. More often than not, you would find no recent sold listings for foils that are not in high demand. The High End Magic Stuff for Sale have a larger listing for you to search through, the prices listed there may not be the price at which the card was bought, and many posters are open to best offers.

Keep in mind that foreign foils, especially the high end ones are only worth as much as the party on the other end of the transaction is willing to pay. The price for foil Korean Purphoros, God of the Forge is a good example. The listing that sold when I first looked it up early this year so happened to meet a buyer willing to fog up $120 for it (Purphoros is popular in Commander I hear), but later listings struggled to find even someone willing to pay $80 for it. As for my own foil Korean Purphoros, I probably will not part with it even for a foil Korean Polluted Delta. The sentimental value attached to it is worth much more to me than a foil Korean Polluted Delta.

I hope you have gleaned some useful information on foreign cards and foils pricing tiers and  how to find out how much they are worth. Join me next week as a recount my Magic adventures in Tokyo.

Edit: The price for foil Japanese Polluted Delta was corrected from 200, 000 yen to 20, 000 yen.  The author would like to thank reader Ben Q who pointed out the extra zero typo.