Last week I left off talking about some of the emails I’ve been getting about Legacy Hero and I was also talking about the changed I wanted to implement with Legacy Hero. I haven’t been able to get all my ducks in a row with most of the changes so I will cover what changes I’m certain about.

I had a vision of sorts when I was talking about all of the changes WotC has announced this year with a friend of mine, who also happens to own a game store. He was trying to come up with some off the wall ideas for new Friday Night Magic to try and take advantage of the announcement of being able to sanction pretty much any format. I suggested that he run some sort of budget minded legacy league that played on Friday nights after the normal Standard or Modern events. The idea was that the players can build decks that came in under a $500 price tag. I told him I would help his players with deck ideas and also help them find the cards they might need to make these decks. The league would play toward a top 8 that would battle for some legacy staples. The store owner has a handful of cards that are certainly sleeve playable, they aren’t really sell-able. Hard to put a value on a Bayou that went through the washer. This will help me move the lower cost eternal cards I’ve been coming across while helping the format grow. Certainly a win-win situation.

Here is another question I’ve been getting a lot lately. To quote an email directly “I see you’ve mentioned pucatrade as an excellent outlet for bulk. Due to my location shipping will be really expensive for both parties involved and in store trading is almost out of the question. As well as playing tournaments to win cards. Buying cards could be a possibility But I already have the equity in cards (bulk cards and modern and legacy staples), and want to avoid spending more.

I guess what I’m trying to ask in a lot of words is what would be the best outlet for a getting these cards through trade without huge shipping costs or travel costs to get to large events or stores? Or do I just buck up and buy them?  Do I eat the shipping in hopes of procuring more trades? (i.e.  List them. card price – shipping) I know i would be losing money in the long run but my location for shipping is ridiculous. Do I abandon the idea all together and not play legacy?”

First, Let me start with saying, No. You shouldn’t abandon the idea of legacy all together. You shouldn’t let anything stand in your way of playing this game as long as you realize the obstacles you have in front of you, which you clearly do.

The area you live is doesn’t have a thriving magic community and as a result, your local card selection is limited. That’s a good and bad thing. Once you start getting into legacy more and more, you are going to have a good chunk of cards to trade out to your local players. You have an opportunity to be the go to guy for legacy staples. This lets you trade out your staples you’re not using anymore into standard stuff that you can out easily and it is usually easier to get throw-ins when you’re ‘trading down.’ I mentioned in my first article about finding trade partners who don’t charge you for trading you staples for your standard stuff. Sometimes it is necessary to do. It seems to have been adopted as the industry standard. I still don’t do it but I’m the minority it seems.

This is the perfect time to talk about this website”s(mtgprice.com) premium feature “the daily briefing,” specifically the “Major Inventory Swing” section. The daily alert contains a snapshot of the last 24 hours of activity. 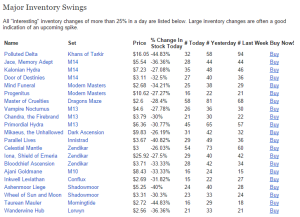 Most of the time when you’re seeing this kind of information, it’s well over 24 hours old. Personally, I love having these sort of lists available to me as soon as possible. I put all of this information into a spreadsheet. That way I can try and grab the stuff that seems to be on a steady decline in supply. A drop in the supply of a card of over 25% in a day is often an indicator of a pending price increase. and have them to buy list or sell online when the price increases. When I lived in an area without a large player group, back when we had to rely on things like Scyre or Inquest to price things out. I remember how much I was able to profit when I got my subscription a week before they hit newsstands.

What does all of this do for us? It lets us maximize our trading creating a maximum return. This method is assuming that we aren’t trading for need anymore (90% of the time at least), strictly for value. I have struggled with that from time to time with this project. I will come across a card and want to keep it for EDH or something. Focus on your goal, getting those dual lands or whatever you need to finish your legacy deck.

Now how are you going to turn your cards into staples? That is what this article series is about. There isn’t just one answer. There are a ton of things to do with your cards, Ebay, Tcgplayer, Facebook trading groups buy listing, trades, etc. I would suggest to go back to the first Legacy Hero article and look at the things I listed so far and continue to follow along as I show you my experiences with the options I try and the things I learn along the way.

I have had 10 cards listed on tcgplayer for over a month. I just sold my first cards on tcgplayer.com this week. You can’t just throw some cards up there and walk away. You have to constantly monitor your prices and rotate your inventory. I try to have a few of the high demand cards up there priced low enough to show up on the first page. I’ve learned just how cutthroat the pricing is. I sold my first two cards this week.I listed two Sulfur Falls late Sunday night. When you’re looking at your inventory, they have this neat button that lets you match your listing’s price with the lowest listed price in each condition, including shipping. I charge $.99 for shipping. To match the lowest listed price (with shipping) I would have had to list my cards at $4.40 with $.99 shipping. That was just too cheap for me so I put the two near-mint copies I had up for $5 each with a $.99 shipping. Less than 6 hours later, they were sold. As I was getting them ready to drop in the mailbox on my way to work, I thought I would look up the buy list price. I couldn’t believe it when I saw this. 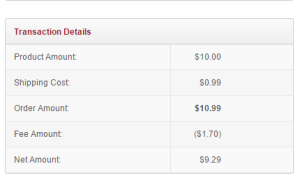 I made $9.29 after they took $1.70 in fees. That is $4.65 each. I effectively lost money using tcgplayer. Now I’m going to ship these out happily. This is a lesson for everyone to learn. If I would have buy listed them to Troll and Toad I would have spent $.70 sending them and got $9.80 cash for a $9.10 profit. If I would have sent them in and taken the store credit bonus of 25% I would have $12.25 in credit. I’m going to go into more detail about buy listing next week.

(Just an update here. I checked this link at 10:30pm est and they ended the original listing and re-listed 4 for $7.49 using a different user name but linking to the same store. Not sure why they would do that but here is the proof for everyone to see.)

I bought a bunch of them. Far more than I should have. I spend the entire Legacy Hero’s budget on Titania and a chunk of my own money on them. Legacy hero was able to afford 10 of them for $29.90 shipped. By the time this article posts the ones I bought will be on the way to their new owners. I’m working on the buy listing process for next week.

Last week I showed a trade that I made on Facebook. Mr Brad Daley (he started the Russian print run collectors group on Facebook) posted in the Magic Trading Forum that he was looking for some cards and had a laundry list of cards available. Nothing exciting but enough stuff that I wanted for Legacy Hero’s binder that I made a deal with him.

According to the poll results, it was close, but Side A was where over 50% of you wanted to be. I agree with you and that’s why I pulled the trigger. You will see that Side A added 3 Wooded Foothills and Side B added a Thoughtseize and “cash considerations” from what we saw last week. Long story short, while we were negotiating the trade the foothills came up and the price was right so it was added into the deal. The deal worked out to be dead even for both sides. When I look at the trade I think that  long term I would want to be on Side B. Spell Pierce, Daze, and shock lands are all format staples. Those prices aren’t going down anytime soon and long term will have a higher return than Side A in my opinion. Short term I want Side A. I will be able to move almost all of those cards pretty quick. Most of the cards are cheap format staples. Reanimate stuff, Storm stuff, Death and Taxes stuff. The quick and easy stuff that players in my area will want to pick up for the upcoming budget legacy league. Casual players love most of that stuff too.

That’s it for the mailbag. I love getting the feedback and hope to do another one in a couple months. Next week we will go over buy listing in detail and I’m working on another trade that will grab some cards for the deck and some other good stuff for the binder. Thanks to all the continued readers and a warm welcome to the new readers. Next weeks article will be posted on Christmas so after you’re done with your presents make sure to sit down and take a look.

As always drop me a line at mtglegacyhero on the gmail and @somethingsays on twitter. Check out Brad Daley’s Russian print group on Facebook if that’s you’re thing. Russian makes for some really good looking foils.