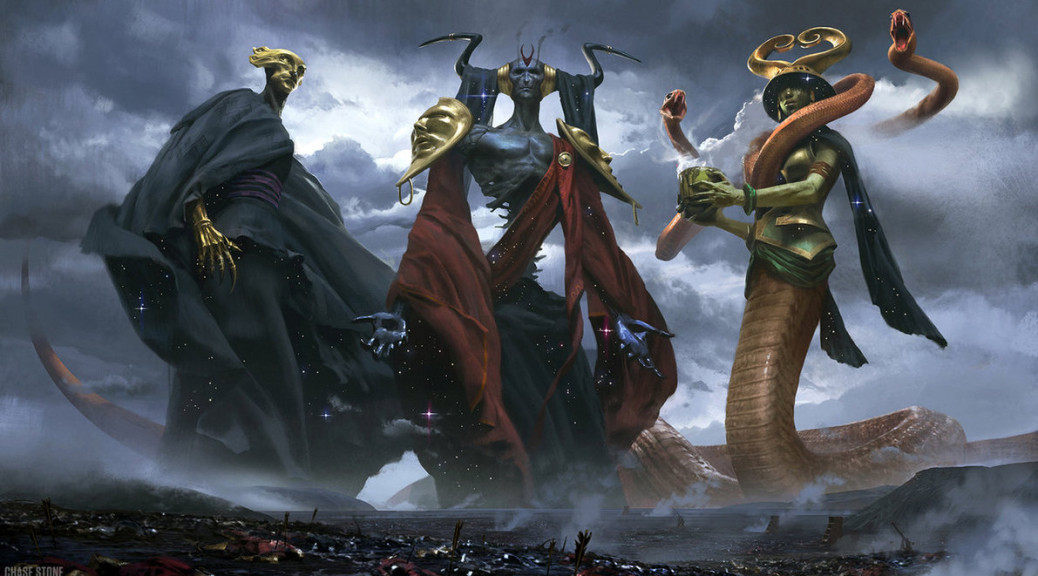 Hypothetically, if you got a Christmas bonus, what would you spend it on?

Right now, there are multiple websites trying like hell to get you to spend money, to buy singles/sealed/stuff at a range of discounts.

This is an excellent time to buylist some things for store credit, with the appropriate bonus for getting that credit, and get things in return while paying very little markup. I can’t tell you everything to buylist (last week’s article is a good start) but I do have some suggestions on what to pick up.

Sure, foil Delta is nearly $100, foil Strand is $75, but the other three are about $50. This is a great time to pick these up, because they are about the lowest they will be for some time. There is still some Khans to be opened (the draft format for three months will be Fate Reforged – Khans – Khans) but the price on foil fetches probably won’t come down all that much.

Full disclaimer: if Mire, Foothills, and Heath all go lower and hit $40 before Dragons of Tarkir comes out, I’ll be buying even more with whatever money I can.

It is also worth noting that there are two other foil versions of these fetches out there. There are Onslaught foils and Judge Gift foils, each with different art and a different appearance. This means that there is a very real cap on the value of the Khans foils. This cap is much higher for Delta and Strand, due to how much those two are played in Legacy. It is unclear how much Modern demand is going to sway the prices over time. Will people simply move their fetches from one deck to another?

He’s dipped under $20 and has a chance to go lower, since drafts and sealed are still going to have lots of KTK to open. The card’s power level is not in question, but the casting cost and inability to have two in play are the biggest problems with jamming him as a four-of.

In practice, this ultimate doesn’t see much play because the opponent is dead after some hasty dragon hits. Still, the power and flexibility are undeniable, and this is an easy pick to go up in value during the next block. I totally agree with Jared here.

Honestly, I can’t see the prices going down much more before or at Theros’s rotation in ten months. Most of the Gods are $5 or less, for some of the most flavorful and powerful mythics around.

All of them at least deserve consideration for EDH, in decks or at the helm. Picking them up now is simply an investment in the future. These are *probably* safe from reprinting for a couple of years at least, and even then, it would be supplemental, and likely not foil.

Foils are especially worth it. Before too long, someone will open your binder and exclaim in delight. It’s up to you how long you want to wait.

Basically, any of them that don’t produce blue mana. There is a big price gap because blue is easily the best color in Legacy, and lands that can’t help with that do not have the same demand.

Wizards appears quite committed to the Reserve List, so anything on there can only go up. Duals like Taiga or Plateau are overdue for a price correction.

A note of warning, though: it’s my experience that Commander doesn’t need duals to function. Sure, adding duals makes a manabase sing (especially with cheap KTK fetches!) but the fixing is so good and so plentiful that duals and even shocks are not required.

If you have deep pockets and want to go for it, the Power 9 have been on a major uptick since about GP New Jersey. I don’t deal with Moxen and such (at least since I sold a Sapphire in 1998) but I’d also be an advocate for the judge foil of Gaea’s Cradle. It’s a unique effect, in a chase foil, and does see some Legacy play, where high values are the norm. The nonfoil has gone up noticeably in the past year as well.

These could be had for around $30-$40 at Return to Ravnica block rotation and have already appreciated some in value since then. I’d love to drop a some money on more, and put them away until they hit $70 or so.

Casual players always like foils, but there is an emerging trend to pimp out your Modern deck too, and that means shocklands. Go forth and pick them up. At worst, they will remain flat for a couple of years and won’t lose value. They will be excellent trade bait in your binder, too!

Again, this is a set of cards that has an upper cap. The original Ravnica block did have foil shocklands, and those carry a true premium. The foils from RTR will never get too high, thanks to the originals.

One thought on “What to Spend My Bonus On”