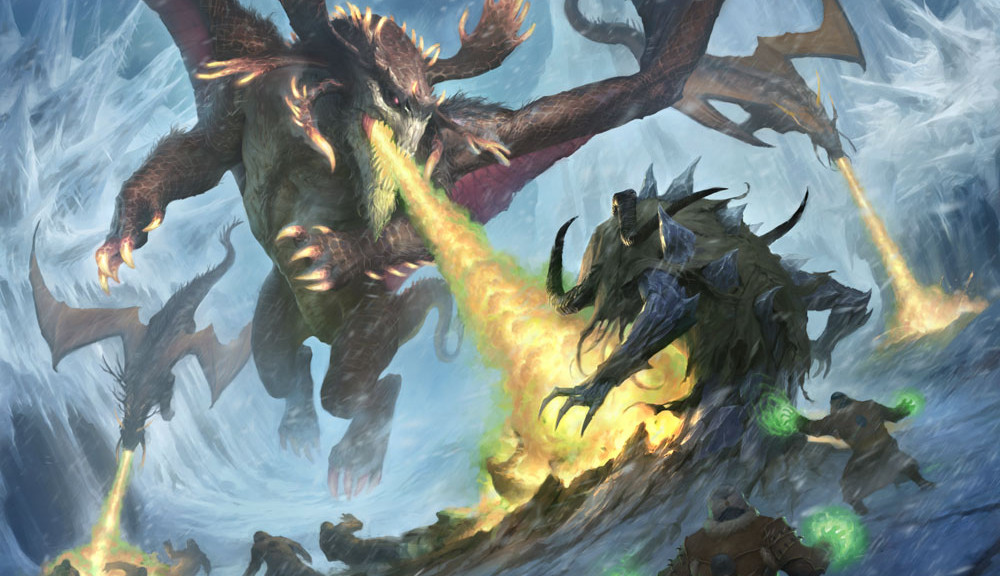 This weekend Fate Reforged made a huge and immediate impact on both Standard and Modern, with cards from the set showing up at top tables of major tournaments immediately upon going legal. Most of our other gainers come as the result of the recent Banned & Restricted announcements which have shaken up both Modern and Legacy. Here’s the down low on the major price shifts in the world of paper Magic: The Gathering this week.

When a combo card of relatively high power gets unbanned, the Legacy folks start brewing and trying to figure out if the card can take a deck into a Top 8. Worldgorger Dragon figures into multiple combos, many of which revolve around it coming in and out of play under the effect of Animate Dead while setting off infinite triggers of one sort or another. The card is certainly breakable, but no more powerful than the stuff that Sneak & Show and Reanimator decks already do in Legacy. Nevertheless, going from useless to potentially playable was enough to send this ancient rare skyrocketing on the price charts. Without a doubt this is a sell if you had a bunch sitting around. It’s hard to beat 500% in a week more than a few times a year, and this is definitely time to take your money and run it into some new action.

Here we have another card that was unbanned, this time in Modern, and in this case because the odds of it breaking format are low without some of the older cards it would need to be truly degenerate. Nevertheless, enterprising souls are a-brewing, so the getting is good if you’d like to get out on your sets up 300%+. I wouldn’t wait on results here, the card’s already been reprinted once (in the Izzet vs. Golgari Duel Deck) and could easily be so again this summer in MM2.

A couple of factors are pushing this previously overlooked Dragon up on the charts. Firstly, it’s the only 5-color commander available for the Dragon clan in EDH/Commander. Secondly, we’re just 6 weeks away from a set list for Dragons of Tarkir, a set that promises to, well, provide us with a ton of new dragons to get excited about. I’d put the odds that they either reprint Scion or provide an even better Dragon commander at 2 to 1, so it’s up to you to decide if you feel like trying to ride this card further north into $10-15 range on dragon hype. Me, I like to pocket cash on anything north of 50%, so I’ve already sold the handful of stray copies I found lying around.

This bad boy mana ramp enchantment was #2 on my list of underrated Fate Reforged specs, so I was hardly surprised to see it make top 8 appearances in Standard at two separate major tournaments. With the potential to double your total mana output in the early to mid game OR to turn your hornets and other flying beasties into a virtual wrath of god, the power here is undeniable. The card has so far found good homes with both R/G Monsters and BUG Delve/Whip builds, and I strongly suspect these won’t be the last decks to run the card in the next 18 months. As a rare from a small set that will be drafted 5-2-2 vs. the rest of the block, I think this card can hit $4-6 on heavy play and/or further top table appearances, so there is still some room to set up some profitable trades if you’re local store hasn’t sold out or boosted the price yet Monday morning. Move quick though, because I wouldn’t be surprised to see this settle closer to $4 before the end of the week, at which point your upside is significantly more limited. Foils may also be solid targets for future EDH play, but there isn’t likely to be any Legacy or Modern action here.

If you locked on to Tasigur when he appeared at #4 on my list of Fate Reforged specs a couple weeks back you may have been lucky enough to pick up copies in the $2 range. If so, good for you. If not, your ship has likely sailed, as $11 is a very high price for a freshly released standard rare, even one that made such good showings at major tourneys in it’s first week of release. The Prince of Fruit was bananas most of the time he appeared on camera this weekend, pulling double duty as a cheap blocker for Siege Rhino etc, while providing long term card advantage when the board got grindy. It’s not a certainty he’ll make a big splash in older formats, but I wouldn’t bet against it at this point. All that being said, sell into this hype immediately, as he should come back down into the $6-8 range as more product is opened this month and I suspect you’ll be able to find him cheaper around the release of MM2 in June.

Well, it’s a broken uncommon that some people thought might be unbanned, but instead it’s been relegated to the bench for the time being. Many pros think the card would be fine in Modern today given the general increase in power creep over the last few years, but that’s not enough to save the card’s price from crashing as disappointment sets in and the unfounded speculations are cashed in for losses. If you’re caught holding, you can ditch for (hopefully) close to what you paid, or just hold on to them hoping for an eventual unban within the year.

Pontiff was on our list as a top gainer just a few short weeks ago, but the banning of Birthing Pod put it’s primary deck out of commission in Modern and significantly lessened short term demand. I’m holding my copies as I believe that the card has other applications in token and aggro based strategies in Modern. That being said, a reprinting this summer in MM2 isn’t totally out of the question, so be wary.

Birthing Pod peaked near $20 in March, 2014, right around the time I was snapping them up 2 copies at a time by acquiring the Spiraling Doom, Dark Ascension event deck. I was a bit stunned that Pod got the axe in Modern, since though it was certainly doing well consistently, the format seemed very healthy. This leaves me with about 20 Birthing Pods I’ll be slowly unloading at a small loss to EDH players out of the gutters of my trade binder for the next few years. It’s important to own your mistakes. This was one of my biggest of the year.