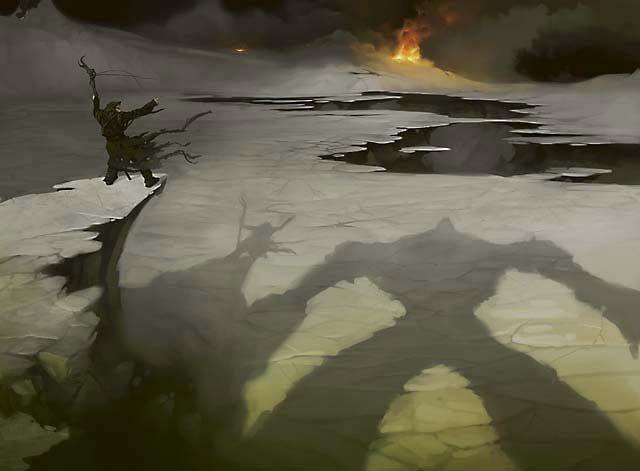 “Green was already the default best color in standard before Fate Reforged rolled up and dropped this sweet threat onto the table. Though many were dubious at first, recent showings at big standard tournaments has demonstrated that Whisperwood Elemental is an excellent way to close out games fast if your opponent isn’t packing enough removal. In partnership with Nykthos, Shrine to Nyx, and various mana dorks, this heavy hitter provides especially tricky scenarios for both aggro and control decks who will often have trouble going just one for one with the lord of the groves.  With FRF not likely to be as opened as many other sets, there’s a good chance that this one falls off a bit heading into summer, only to rise again at rotation. As such you can sell now if you got in early and don’t need them to play with. Otherwise, you’re safe to hold into fall.”

More of the same. The card is seeing lots of play and you can hold to play or sell to profit as you desire.

Along with Amulet of Vigor, Primeval Titan, Pact of Negation and Hive Mind, pretty much all of the relevant cards in the Amulet Bloom deck have spiked by this point as it becomes more and more clear that the deck is Tier 1 despite being tough to master the play lines. Of the bunch, Pact of Negation and Summoner’s Pact are the least likely to get banned and the most likely to have additional applications in future decks. They’re also unlikely to be reprinted again any time soon since they both appeared in Modern Masters. As such there may be upside left to be found on both cards, with Summoner’s Pact potentially peaking around $15 in if stays relevant in Modern. I’m not holding any beyond my personal play set, but if you had some tucked away, I’d look to get out around $10 before mid-summer if possible.

This card is spiking on Tiny Leaders speculation. The assumption is that the card is going to be great with friends such as Stoneforge Mystic, the 5 super swords and other white equipment specific beaters under 3 casting cost. It could push higher later as the supply is relatively limited, but for now should settle south of $10 until Tiny Leaders demand really gets beyond the speculation phase and enough players have their decks made.

I’ve got about 20 of these so I’d love to see this guy spike hard before rotating into irrelevancy but I’m not holding my breath despite this reasonable increase after showing up in the new versions of green devotion in Standard recently. It’s too low to be worth selling, but if it hits $4-5, my ears might perk up.

Having fallen down from $30 highs on release, Garruk is enjoying a mild resurgence as a solid answer for Abzan and Sultai builds looking to contain Ugin, the Spirit Dragon or grind out longer games in Standard. Below $10 he was midly sexy, as he isn’t likely to see a reprint anytime soon and could hit $15-20 in a couple of years on limited supply, but we might as well wait until rotation this fall to snap off some copies in the $6-8 range.

This weeks losers are all just recently spiked cards that have fallen back a bit off recent highs as hype mellows. To wit: