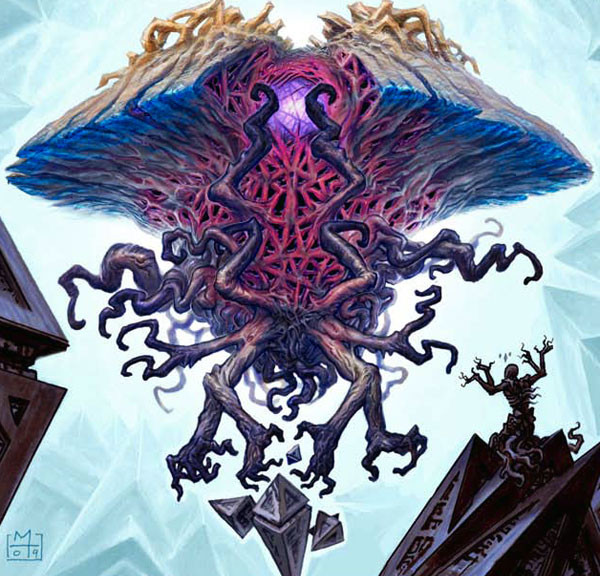 Now that Modern season is in full swing, we are starting to see Modern cards spiking all over. Some like Olivia Voldaren was probably due for a spike due to their set’s age. Some, like Huntmaster of the Fells started becoming popular in the Jund builds that emerged after the banning of Treasure Cruise and Birthing Pod in February, but as there were not a single major Modern event until last weekend’s StarCityGames Invitational, his price stayed low for months and only spiked this week when the wolf is out of the bag.

There are two cards that I have been watching and holding for a while. Those two cards surprised me when they both dodged the reprint bullet in Modern Masters 2015. Those were two cards I’ve discussed in an article a while back as well.

And I think those two cards are positioned to spike again soon.

Those two cards fell under the radar and resurfaced when I saw Joe Lossett playing in feature match during the Invitationals with this deck: 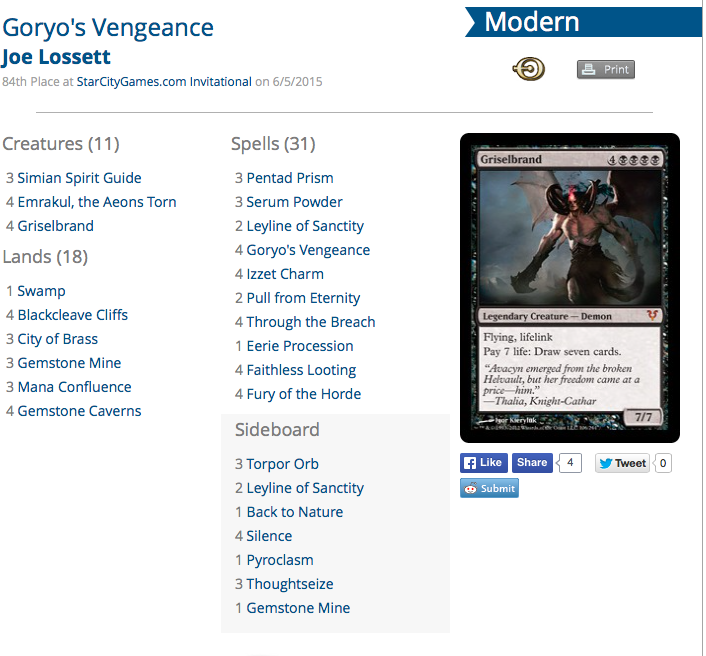 By now you would probably have guessed the two cards I am referring to. Before I explain why I think those two cards are undervalued right now, let’s have a quick look at the deck and the reasons why I think the deck has a future in Modern.

Back with a Vengeance

Goryo’s Reanimator is an all-in combo deck that aims to cheat into play an Emrakul, the Aeons Torn or a Griselbrand as early as turn two (turn one for some builds, but lets not get there) using its namesake card, Goryo’s Vengeance. For those unfamiliar with the deck’s interactions, Goryo’s Vengeance instant card type allows you to reanimate Emrakul from your graveyard while Emrakul’s shuffle trigger is on the stack, giving you a hasty 15/15 flying attacker with annihilate 6. You could also reanimate a hasty Griselbrand and use his Necropotence activation to chain multiple Fury of the Horde and attack phases to win that very turn.

Through the Breach provides you with an alternative way to cheat your win conditions into play that works around graveyard hate, imbuing the deck with another angle of attack and added resilience.

While Goryo’s Reanimator is a glass cannon combo deck, it has a few characteristics that make it more reliable than your typical Belcher-style decks:

Financially, cheaper Griselbrand and Emrakul made the deck more accessible. After nearly a year of being handed out as Grand Prix promo, Griselbrand’s price is half where he was a year ago. Emrakul’s reprint in Modern Masters 2015 made $30ish Emrakuls available in the market.

While I do not think that Goryo Reanimator’s time to shine is right now, it is worth talking a look at the key cards that make the deck work. 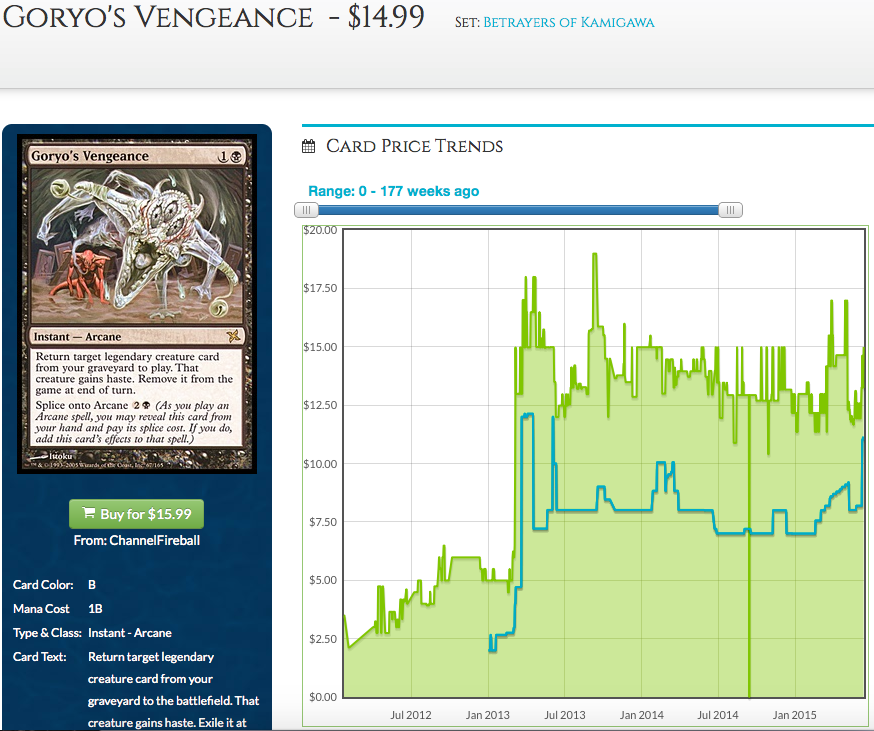 Goryo’s Vengeance spiked above $10 when the Goryo’s Reanimator archetype came out in mid-2013. It has been hovering between $12 to $15 since.

Now why am I talking about a $15 card? Surely Goryo’s ship has long sailed?

I think that Goryo’s current price is still quite far off its ceiling. First off, An entire Modern archetype was made possible by Goryo’s Vengeance, a rare from Betrayers of Kamigawa, a small set that was released ten years ago and has not seen a single instance of reprint. I was fairly surprised that Goryo’s Vengeance was skipped over for reprint in Modern Masters 2015, as big reanimation targets and the arcane subtype were in the set.

Take a look at another card, Oblivion Stone, that is played in exactly one archetype in Modern. The Stone recently shot up to $40 on the back of Red-Green Tron’s stellar performance last weekend, after hovering at $13 for ages. Granted, Tron is now a tier one archetype while Goryo’s Reanimator is tier two. On the other hand, Oblivion Stone is from a large set, and has two printings. I don’t think Goryo’s Vengeance would shoot up to $40 if the archetype becomes popular, but it is not a far shot to imagine it hitting $30. After all, being an arcane card with a plane-specific name, the odds of Goryo’s Vengeance seeing a reprint is much lower than that of Oblivion Stone. 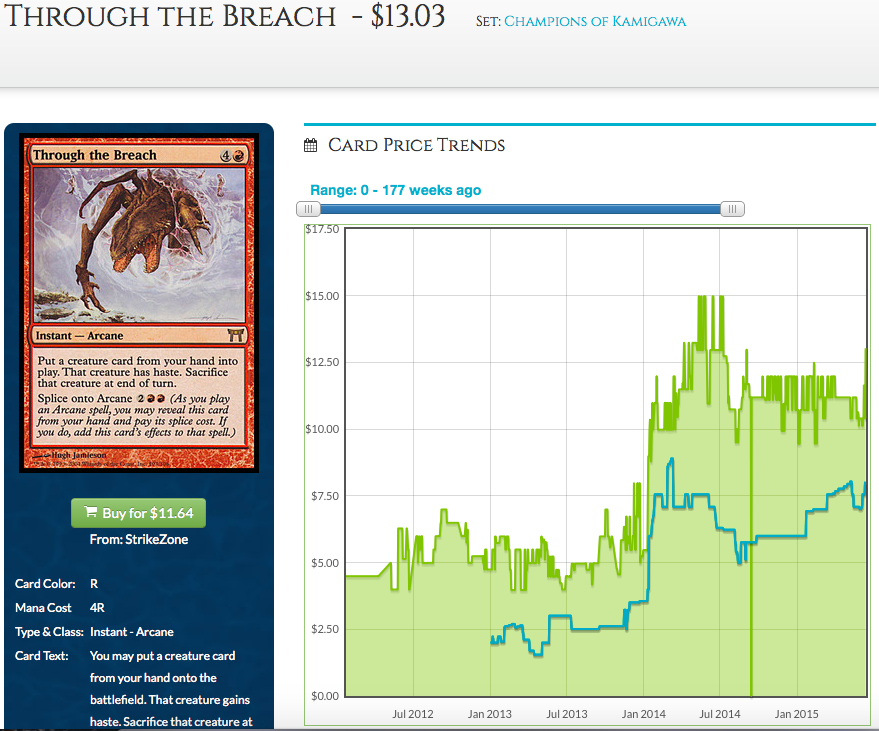 Through the Breach’s only printing is from Champions of Kamigawa, which is eleven years old as of writing, though Champions is a large set. Though the Breach has two upsides over Goryo’s Vengeance. First off, it sees play in the sideboard of Legacy Omnitell decks, albeit as a one-of. More importantly Through the Breach is not restricted to just one archetype.

At Grand Prix Madrid last November, Through the Breach was featured as a four-of in a Through the Breach – Summoning Trap hybrid ramp deck designed and piloted by Ricardo van den Bogaard which plowed through day one with a perfect record and made top 8 of the Grand Prix (sadly losing in the semis to variance).

And that deck was no fluke. While the archetype did not take off in popularity, the deck took down a PPTQ in Switzerland and was runner-up in a 214-player Modern tournament in Tokyo.

Both Goryo’s Vengeance and Through the Breach are already relatively expensive to buy-in at $15 and $13 respectively. Buying in at such prices entails higher risk than buying in $6 Disrupting Shoals or $6 Huntmaster of the Fells. I featured those two cards today as I am confident that they are undervalued at their current price, and I suspect they are only so because the archetype(s) that run them has yet to take off in popularity.

All it takes is a Grand Prix top 8 with either of those cards during Modern season. Ricardo’s top 8 unfortunately occurred outside Modern season, which could be a reason why Through the Breach did not spiked hard in response to his top 8. Do share your thoughts in the comments below or catch me on Twitter at @thguoheng.

PS: A wild speculation. What could Red-Green Tron do to survive all the expected hate cards directed at it in the upcoming metagame? Chuck in a few mainboard Through the Breach to next level that smug opponent who mainboards Blood Moon.