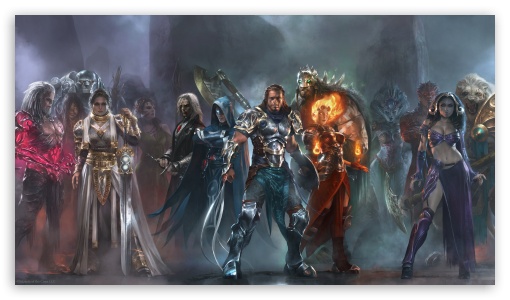 It’s been almost eight years since the planeswalker card type was introduced. Before that, the lore of the game cast planeswalkers as legendary pseudo-gods that were almost always too powerful to print. I mean, we got Nicol Bolas back in Legends, but he felt like more of an “attack with big dragon that roars” instead of “archmage that casts multiple spells to obliterate his opponents.” We never got a card for Urza, because Wizards claimed that he would be far too powerful to see play. Neither did we ever get Serra or Leshrac from the pre-Mending era.

Planeswalkers were basically gods that would far overpower the “normal” creatures of the time, and WOTC didn’t yet have the design knowledge to make world-crushing nigh-unstoppable beings in card form.

During the Time Spiral block, we saw the last of the “planeswalkers imagined as creatures.” Jaya Ballard had multiple activated abilities to show the versatility of her spell weaving, but it wasn’t enough to make her feel awesome. Teferi controlled the flow of time by slowing down his opponents, but he was still just a creature. I’m not going to write an entire lore column, because you guys aren’t here for that, but the Mending was Wizards’s way of fixing and adjusting the walkers to a power level where they were more feasibly printed.

Enter Lorwyn. With a brand-new card type that was hinted at by Tarmogoyf itself, planeswalkers and the rules surrounding them were the talk of the town. At least, I assume they were. I barely knew how to play Magic at the time, and I wasn’t paying attention to new set releases until closer to Shards of Alara. But as a casual player, I fell in love with planeswalkers as soon as I saw them. Ironically, I was the last person in my small casual group to actually attain one, and that was only because my friend took pity and traded Garruk to me because he had two from the Garruk vs. Liliana Duel Deck. 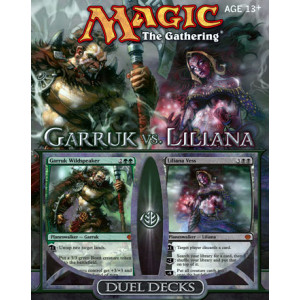 Anyway, the point here is that the planeswalker card type was a home run on pretty much all fronts. Casuals foamed at the mouth at the chance to summon an ally to the battlefield and cast spells every turn, and the Spikes of the world enjoyed how difficult to remove and mana-efficient they were. While there were balancing issues over the first few years, ‘walkers as a whole were appreciated by the entire community. Savvy traders who navigated the rift between casual and competitive caught on quick, and learned that converting tournament staples into undervalued loyalty counters was a quick way to make a profit.

This mantra has held true for as long as I’ve been in this business. If your trade partner’s binder is stretched thin, just target pretty much any planeswalker ever. I’ve sold more Vess than Veil in my time buying and selling Magic, and it’s not close. Hell, even Tibalt is worth trading for because he’s so goddamn infamous. There are multiple people out there who collect exclusively Tibalt because he’s regarded as the first “obviously bad” planeswalker. I’ve traded for a Tibalt before, and it was intentional. I wanted that Magic: The Gathering card because I knew another human being on this planet actually wanted to own it, even though the card is obvious garbage and is basically a recurring joke at this point. 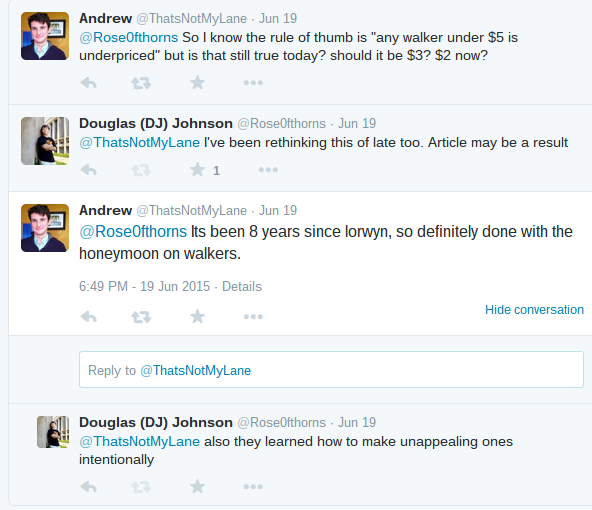 In years past, $5 was always the benchmark for “cheap planeswalker that you should probably buy, because it’s going to rebound back like an Immortal.” If the garbage version of Gideon can float around at $5 despite seeing zero play, then that should be the benchmark low (the one exception being our beloved Fiend-Blooded friend).

However, it looks like we have a few challengers in our midst who are refusing to make the climb: 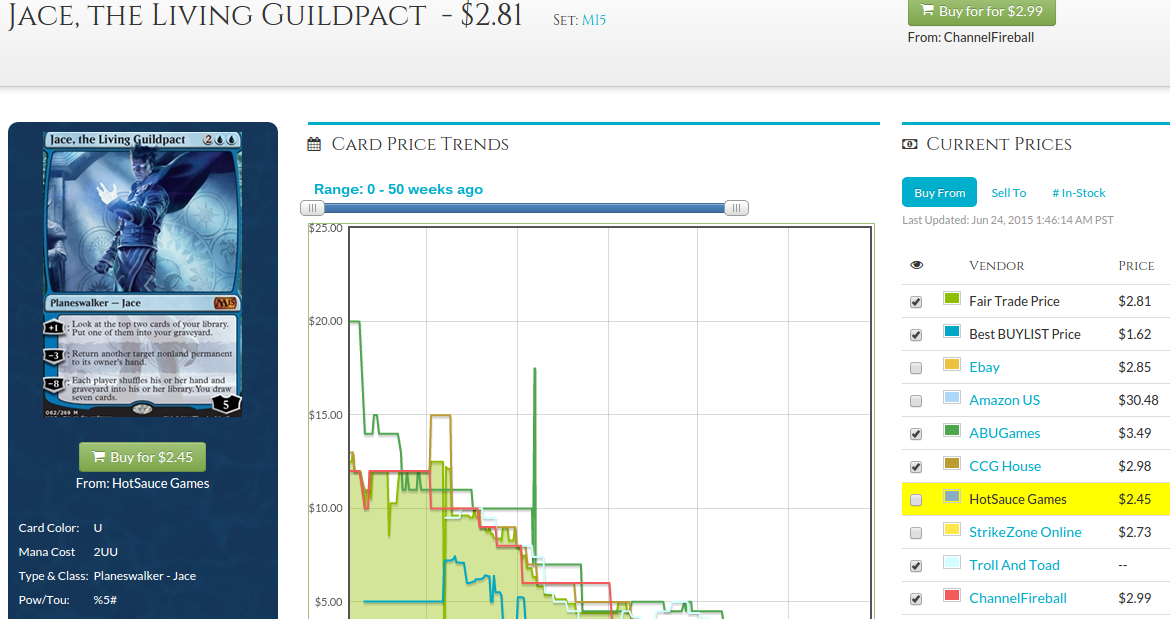 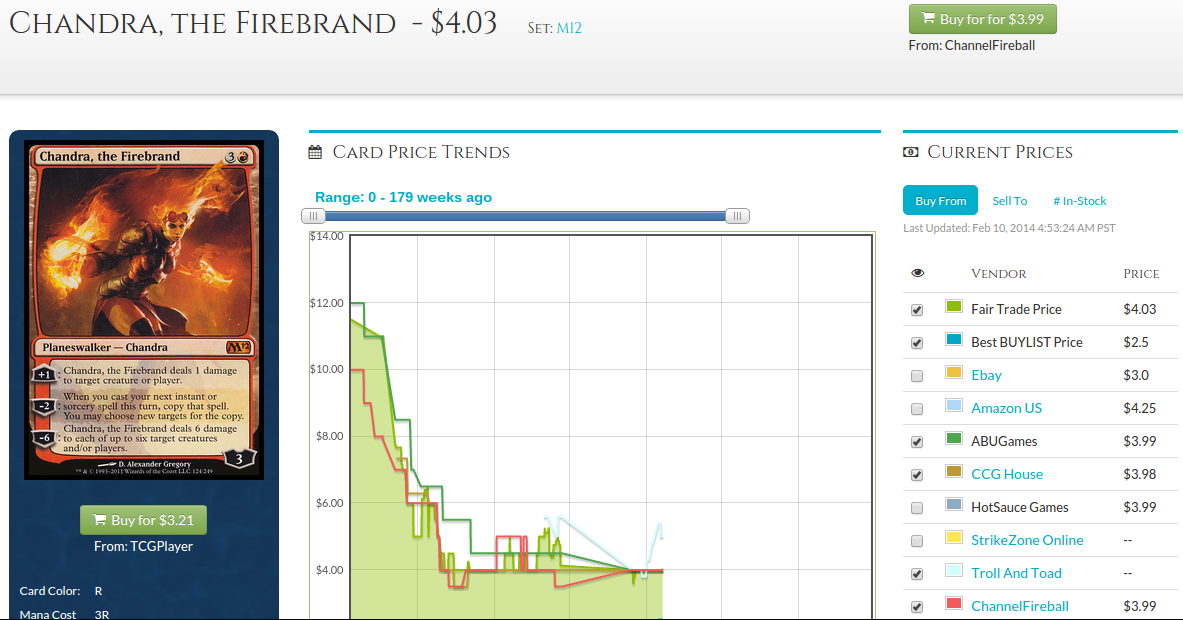 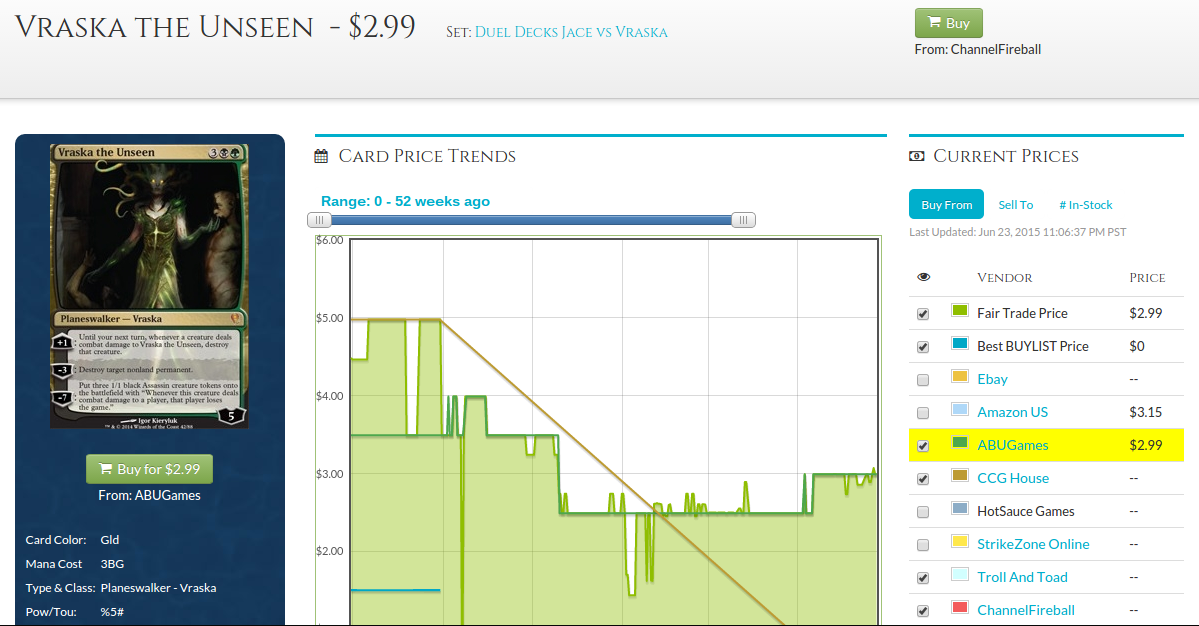 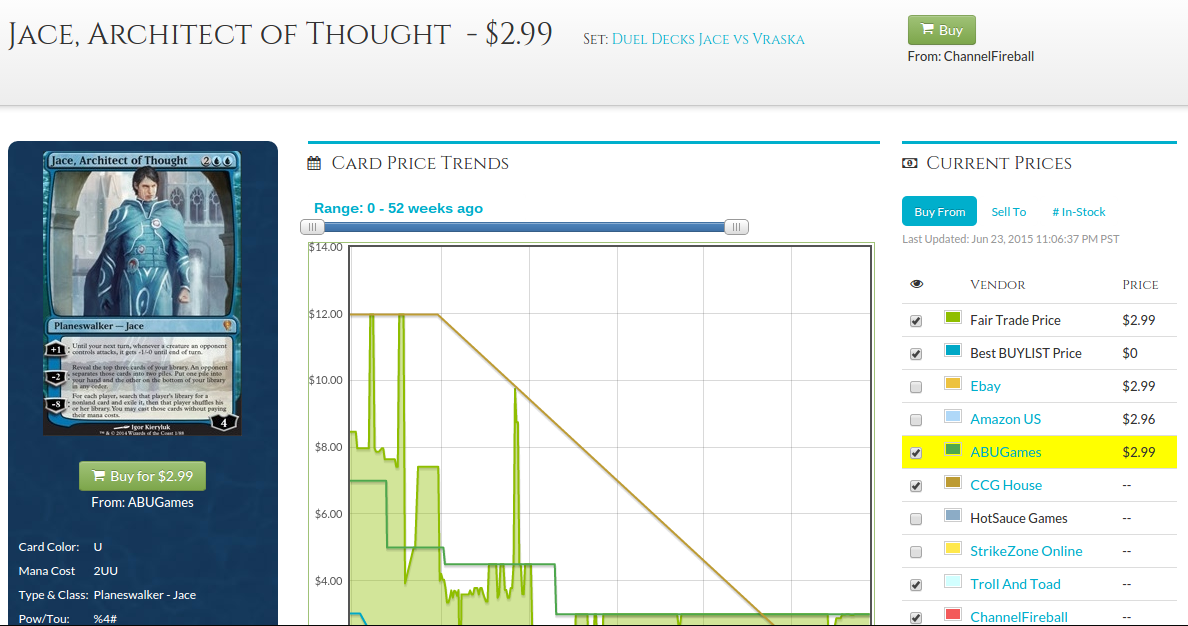 I can come to terms with the fact that Architect and Vraska won’t rise to the occasion. The Duel Deck skewered their prices and sealed their fates (and both pieces of alternate art are absolutely awful).

However, I had at least a little bit of faith in M15 Jace and M12 Chandra slowly making a comeback…

Don’t Call It a Comeback (It’s Probably Not)

Tibalt has a higher fair trade price than M15 Jace . And yet hell hasn’t frozen over, pigs are grounded for the moment, and the third world war hasn’t caused the end of us all. I’m not sure if we should throw a party for Tibalt or mourn the end of his legacy. When M15 first bottomed out, I took the $3 Jace as a signal. His name had E, J, C, and A all arranged in a certain spelling towards the front of the card, he was four mana, and he started with a large chunk of loyalty. Even if he was obviously inferior to his cousins, I figured I could easily pick these up in trade and then dump them out of my display case once they made their climb back to the $5 bare minimum.

Easy game, easy life, right? Those who can’t afford a Mind Sculptor go for Beleren, and those who couldn’t afford Beleren would jump on these. I made similar moves on Chandra, the Firebrand, trusting in the creep back to $5. Trade for a bunch, and then dump them in the display case. Garruks don’t last a week behind that glass, and neither do copies of Nicol Bolas. Why would these be any different? In my past experience selling ‘walkers to casuals, they didn’t have to be good to move off the shelf.  A six-mana Chandra sells like wildfire, and she never saw a spark of competitive play in her life. 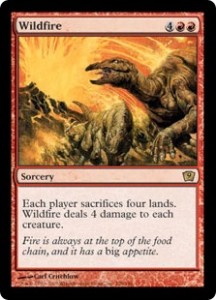 So how many Living Guildpacts and Firebrands have I sold out of my case ever since initating my master plan?

Zero Jaces, and one or two Firebrands.

There was actual dust on the front Jace when I went to check on my case last week, and he’s priced at $3, yet hasn’t moved in God knows how long. You would think that casual players would jump at the chance to jam a planeswalker in their decks for such a low cost, but my experience suggests anything but.

The mantra that all of us financiers and value traders has been chanting has been dead for over a year. “Trade for a planeswalker if it’s under $5,” and, “Trade for any planeswalker ever because it’s easy to sell,” are relics of a forgotten age.

I’m even wondering if my Daretti investment was a worthwhile buy, even though I managed to find some copies that I thought were underpriced at $2.70 each. I was going to rely on his rock-solid $5 price tag in order to evacuate from the spec in a pinch and settle for doubling up, but he’s already shown signs of sliding in the opposite direction.

So what went wrong? Well, planeswalkers aren’t as special anymore. Instead of having a limited number in each color to choose from, the casual players have approximately seventeen different mono-blue Jaces to choose from for their mill or control decks. Being the 57th best walker out of 59 available walkers sucks a lot more than being the 25th worst walker back when there were 27. There’s a lot less of a “uniqueness” factor, because Living Guildpact, Firebrand, or Vraska all fail to fill a niche in a deck anymore, even down to the casual level of play that those reading an article like this just don’t experience first-hand.

Where to Go with Origins?

As much as I loathe talking about upcoming sets and speculation, I’ll throw my hat into the ring on the Origins double-sided walkers because it’s relevant to this discussion. If you’ve dabbled in Magic finance at all, you’ve obviously been told or have been the one to tell people to drop ‘walkers early on in the opening season like hot potatoes. Sell them as soon as you crack them at the prerelease, because there will be a time several months down the road when you can reap the profits by buying or trading back for them at that sweet $5 baseline fallback plan.

Half of this will still be true. Sell whatever planeswalkers you open at your prerelease right away, but even once they “bottom out” at $5, I’m going to suggest staying away from these new flip ‘walkers entirely.

While they can be used as Commanders this time around, none of these ‘walkers have any truly unique traits compared to their predecessors. Chandra burns creatures and players? So does every other Chandra in existence. Gideon makes you attack him, and then turns into a creature to smack you right back. No surprises there. Jace mills? Someone fire up the printing press, this is breaking and unbelievable news!

While I definitely sound a bit cynical concerning their appeal, I’m not trying to suggest that they’re unplayable. All of the novelty is tied into the fact that they can flip, and I don’t expect their backsides to be overtly exciting or novel to the average casual player.

If you want to play them in EDH (I certainly don’t think they’re bad in that format), I suggest waiting until an absolute rock bottom of $3 to $5, and I wouldn’t advocate holding onto them while crossing your fingers. At least Garruk Relentless started out as a ‘walker, made an impact on the opponent’s board, flipped immediately, and presented a large number of options while in play. Unless these five find homes in Standard (which I do think is entirely possible for Gideon and maybe Liliana), I think it’s possible that we’ll see them at an extreme low, and it will end up being a speculating trap.

Am I correct about the $5 minimum on planeswalkers being gone for good? Is there a new lower boundary of $3, or is it possible for non-Tibalt walkers to sink even into the $1 bulk mythic status?

I’m certainly expecting a bit of dissenting criticism from this one. I’m curious to hear your thoughts on where the Origins walkers end up, and if being double-sided is enough of a novel appeal to the casual crowd that would sustain a price above $5 throughout their lifetimes.

As always, thanks for reading!

10 thoughts on “The Immortality of Planeswalkers”