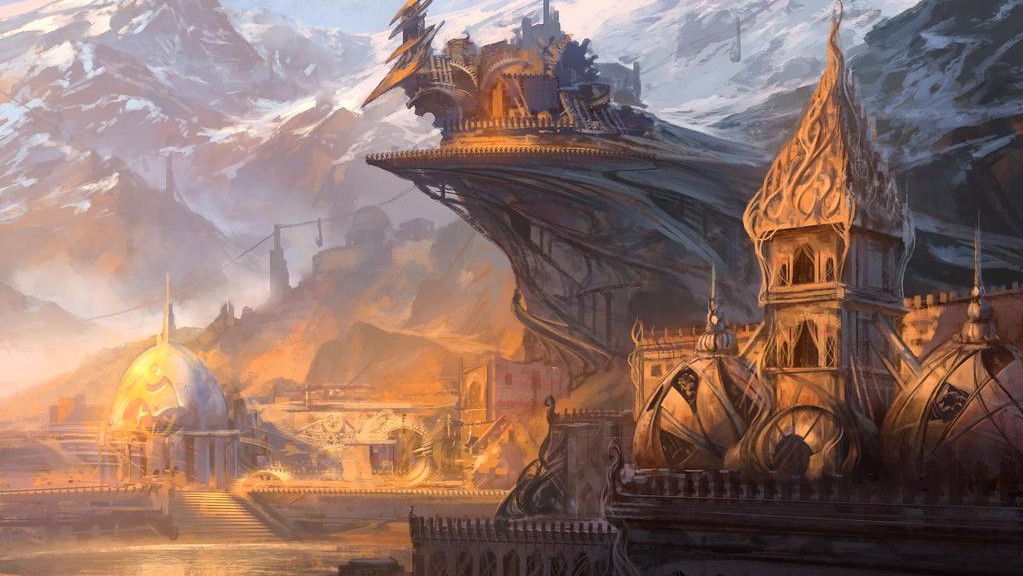 The introduction of fake cards into the market bears poorly for Magic as a whole. Intended to be a cheap alternative to authentic cards, they’re created with the express purpose of allowing players to get their hands on cards they couldn’t (or wouldn’t) otherwise afford. Frequently the quality has been poor, especially so in the past, but they’re getting much better. Their existence undermines the premise of Magic as a collectible card game by devaluing authentic copies. We need to be aware that these exist, and that they contribute to making the game more unstable as a whole.

You guys are thinking of proxies too, right?

For those unfamiliar, proxies are fake cards that make no effort to disguise their identity. As homemade cards, there’s no restriction on not only what art is used, but every visual aspect. Borders are extended or removed, power and toughness boxes shift, set symbols may disappear or change, and the art ranges from renaissance paintings, to high-quality digital pieces, to manchild ponies, to topics too vile to mention here. 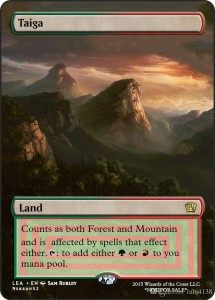 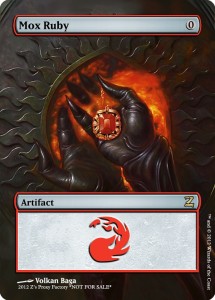 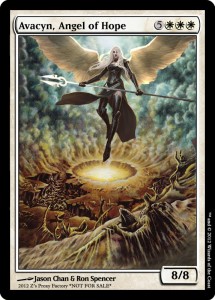 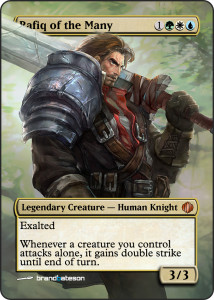 Proxies are almost exclusively used in noncompetitive environments. Cubes tend to be the most common home of proxies, for two reasons. The first is that cubes are often considered a vehicle for personal expression, a reflection of the individual that owns it. Personalization of cubes can manifest in more than one manner. Draft archetypes can be aligned with the owner’s personal preference, such as whether to make the black and white combination aggro, enchantments-matter, spirits, or to not even include an archetype for that pair. Aesthetics are no different. Cube owners already spend time debating which version of Demonic Tutor they prefer—Beta, Divine vs Demonic, or the judge foil—so the option of adding completely custom card faces is a natural extension.

The second, more obvious reason that cubes frequently take advantage of proxies is that cubes tend to include expensive cards. While not all cubes include the power nine, many do, and we’re all well aware of how expensive even played Unlimited power is. For a cube owner seeking to have beautiful cards in each sleeve, the idea of shelling out for SP Alpha or Beta copies is unpleasant to say the least. With proxies offering substitutions for Moxes at 1/100th the cost, along with the additional option of customizing the appearance with unique or personal art, it’s no surprise that this is a common path.

Proxies are popular in EDH as well, another singleton format with many of the same characteristics as Cube. While the default method of upgrading an EDH deck is to foil it out, many choose to take other routes, including custom alters or proxies for most or all of the cards in a deck. While power is banned, there is still no shortage of expensive cards to use in EDH, and as such proxies often appear in this format as well. When choosing between an authentic $180 Gaea’s Cradle and a $10 Gaea’s Cradle proxy for use in a strictly casual deck, the choice for a cash-strapped player is often simple.

If we consider what “proxy” actually means, it may help to illuminate the gap between their use and their intent. In natural, non-Magic English, a proxy is something that stands in for something else. Pinch hitters in baseball are proxies. A proxy server stands in between you and the website you’re attempting to reach, acting as the true content while sidestepping network security (which is especially useful when a content site like SCG is blocked at work but the proxy website isn’t). In Magic, when your draft deck is 39 $.10 cards and a single foil Jace, Vryn’s Prodigy, you don’t want to bother sleeving up. You sharpie “Jace” onto a basic Mountain, and voila: that card is a proxy. You get the idea. A proxy is meant to stand in for the real thing.

Consider again that proxy Gaea’s Cradle in an EDH deck. What is that standing in for? For a real copy of Gaea’s Cradle, right? But which real copy? 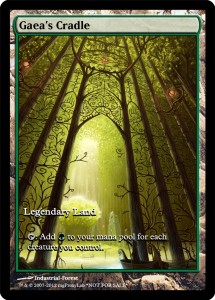 When you pull a foil mythic in a draft and don’t want to bother sleeving up the deck just for a single card, you shove a proxy into your deck and keep the foil in your deck box. The proxy card refers to something quite real: that card, right there, in your deck box. You can lift that card up and hold it and put it on the table after you’ve cast the sharpied Forest in your hand. The proxy is a substitute for an immediately available card.

How about that proxy Cradle in the EDH deck though? If you don’t own a true Gaea’s Cradle, what is it proxying? It’s not proxying your judge copy that you’ve got set aside so that you don’t have to shuffle it. It’s not a substitute for any card in your home. No, it’s proxying some other copy. A copy that belongs to someone else. Your proxy Cradle is there, representing the real Gaea’s Cradle still in your LGS’s glass case, the one you didn’t purchase. It’s proxying the real Cradle still in that person’s binder that you didn’t bother to trade for because it was too expensive. It’s proxying any real copy of Cradle—none of which you own.

People don’t feel bad buying a proxy Cradle because it looks nothing like the real thing. How close can it get? How similar can the proxy and the real card be before you’re uncomfortable with it? If I start selling fake cards that are identical to the real thing and I market them as proxies, am I really selling a proxy, or am I selling a counterfeit?

Counterfeit cards are not created or endorsed by Wizards of the Coast. They are not official cards. They exist so that people can buy them instead of real cards. When you buy counterfeit cards, you’re undermining the market for Magic cards. Instead of investing in genuine product, you’re giving it to people who are actively devaluing authentic product. All of this is true of proxies as well. 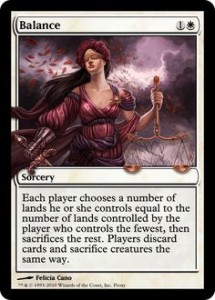 Clearly there is a difference, and I’m not blind to it. Counterfeits are designed with the express purpose of tricking people. They’re intended to deceive players and judges in competitive environments. Even if the counterfeit websites don’t say “fleece some idiots” on them, and instead recommend them only for kitchen table play, that’s obviously a weak deflection of responsibility. There’s deliberate malicious intent in the creation of counterfeit cards, just as there is with counterfeit handbags and shoes and watches and everything else.

I don’t believe that there is much or any malicious intent in the creation of proxies. No one is trying to deceive others into believing these cards are real. In fact, it’s just the opposite: proxies are remarkably and expressly different from real cards so that there is no chance of confusion (or lawsuits). Proxies are all about exploring different art styles and layouts that Wizards can’t, adding custom imagery to your game, and spicing up your decks. And as per @theproxyguy, they’re about “making Vintage, Cube, and EDH accessible since 2010.”

While counterfeits are intended to deceive and proxies are not, the two are opposite faces of the same coin. Both are fake cards that players can use instead of real cards. Fake cards that cost way, way less than real cards do. On one hand, it’s a predatory business model that seeks to steal profit from Wizards. On the other, it’s a bunch of folks looking to add flavor to their cubes and skip spending thousands of dollars on power. Intent is a dividing line here, and while counterfeits are ill-intentioned and proxies are well-intentioned, you know what they say. The road to hell is paved with good intentions.

I’m not blasting people that make proxies or use proxies. That is not my goal. Hell, I’ve done it myself. In what was theft twice over, I found myself lacking a Reaper King for my Reaper King EDH deck. Shamelessly lifting the idea from elsewhere, I printed out a QR code that linked to Reaper King’s magiccards.info page and shoved that into a sleeve instead.

My goal in bringing this to everyone’s attention isn’t to ruin the party, but to make it abundantly clear that while you may love the images and artwork of proxies, they are not an entirely innocent practice. No, you’re not looking to scam people with them, but you are indirectly taking money out of WOTC’s pocket, just as counterfeits do. It’s not as extreme or deliberate, but the end result is still similar, if certainly less pronounced. If you scoff at this, imagine someone proxying an entire EDH deck. Would you be thrilled about playing against that when you had saved to buy all the real copies yourself? How about if she’s proxying a Gaea’s Cradle, a card currently missing from your deck because you haven’t yet been able to purchase it? Do you think perhaps it’s going to burn you just a little when she’s tapping her fake Cradle while you lack one yourself?

Now how about an entire local community that proxies their EDH decks? That LGS owner is going to have a lot of unsold Sol Rings in his case that he wouldn’t have if everyone hadn’t used proxies. 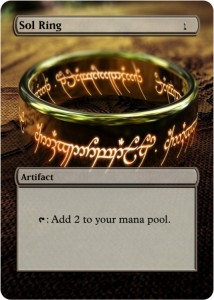 Proxies occasionally look phenomenal, and the well done ones are certainly striking. A well-curated cube of all proxies can be packed with flavor and personality that makes it uniquely yours. Just remember when you’re considering them as an option, a proxy is only a proxy if it’s standing in for a card you own. If you don’t have the card you’re proxying, it’s not a proxy anymore. It’s a counterfeit.