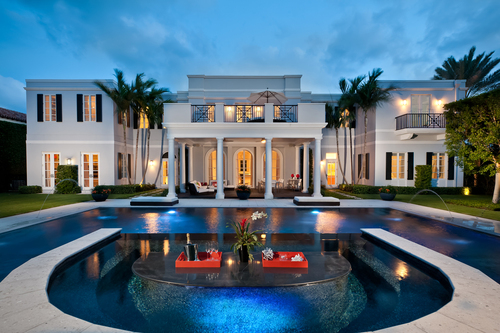 Yeah, you know me. I’ve been writing articles on Magic finance for almost two years now, so I’ve basically figured out every single thing there is to learn about this extremely delicate ecosystem we live in. I’ve written some of the greatest, quality-est stuff of the decade, and some of the lesser minds of the community have pretty much suggested that I’m the Batman plus Superman plus Goku of Magic finance, all put together in one currency-conjuring package.

I’m just going to assume that you read The Art of War: MTG finance edition that’s still hot off the presses from last week, so now that you know every gory detail about the millions of dollars that I rake in every day from my vast and expansive MTG finance network. Seems like a pretty freakin’ sweet gig, right? Gonna go out and start up your own MTG finance business like me, are ya? I don’t blame you, my life is pretty sweet. I sleep on a bed made of the finest foil Tarmogoyfs, delivered on a bicycle by Pete Hoefling himself. Every day, I buy sets of Alpha power from 48-year-old men who say stuff like, “Hey, I just found a bunch of this stuff in their basement, and was wondering if I could get a few hundred dollars for it all.” Every night, I listen to my own podcast. You know, the one I spend four hours recording, where I’m the only host. #MTGFINANCE

Well I’m here to let you in on a little secret.  MTG finance isn’t all fun and games. It’s a ruthless and papercutthroat world out there, so only the strong, smart, and incredibly attractive can survive. It’s a ton of hard work every day, and it has some of the most grueling aspects of any job out there. You’ve seen the best parts of MTG finance, so now I’m going to show you what the other writers are afraid to reveal to the public. These are the things I hate most about working in Magic: The Gathering finance. 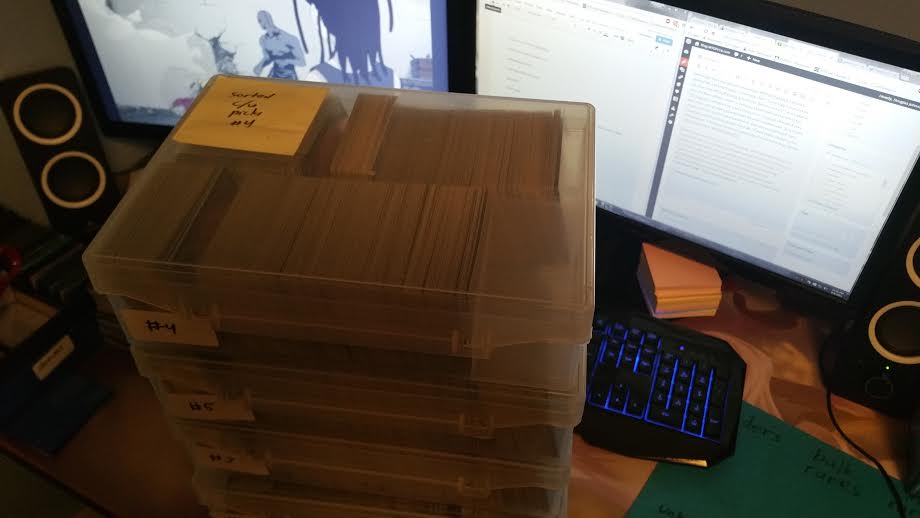 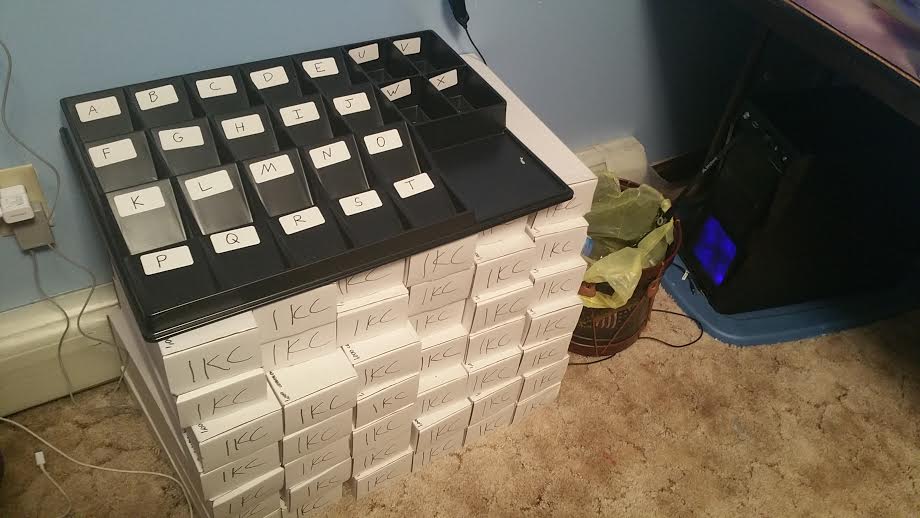 When most people use “C/U” as an abbreviation for “common/uncommon,” they’re referring to bulk lots of non-rare peasant cards like Glistener Elf, Blighted Agent, Brainstorm, nonfoil Force of Wills—you get the idea. Personally, I don’t even touch filthy low-rarity cards unless they’re foil, and either Japanese, Korean, or Russian. And let me tell you, it’s a huge pain to constantly have to sort and alphabetize all of these absurdly expensive cards. Sometimes, I even run out of programs to watch on Netflix, and have to degrade myself to watching reruns of anime that I’ve already completed. As you can see in the first image, we have Full Metal Alchemist: Brotherhood playing in the background, with a freshly sorted pile of Russian foil Gitaxian Probes, Young Pyromancers, and other garbage.

The second picture is my top-tier professional sorting tray; only the experts have this type of smooth, black plastic. I would tell you where to get it, but you should have been paying attention to my previous articles, where I already told you where to find it. Unfortunately, this tray doesn’t hold nearly enough cards for my personal needs. The 42,000 cards beneath the tray are all foil Legacy and Modern staples that need to be alphabetized, and a small, peasant-sized tray like this isn’t going to be quite large enough to support my exquisite needs. Ugh. The thought of these cards touching a playmat to be sorted and sold is making me sick, so let’s just move onto the next annoyance that I have to deal with in my stressful existence.

2. Telling People Their Parents are Dead

Yeah, that’s an occupational hazard in MTG finance. What, you don’t believe me? I’m serious here.—100-percent serious. Alright, fine. Let’s go though a normal scenario that I’m sure you’ve been through. You talk to a guy about buying his collection, and he says it’s pretty small. He’s mainly a casual player that has only been casting spells since Fate Reforged, but he has about a hundred rares. Tsch, just another small collection. Doesn’t anyone have anything better? Whatever, let’s get this over with. Maybe he’s got at least one judge Force of Will that will make it worthwhile.

You meet up with the  guy at his place, and he pulls out his precious little fat pack box. The first card you see when you open the lid is an unsleeved, moderately played Spine of Ish Sah from the Commander 2013 product, and you vomit in your mouth a little. Not a good sign. After flipping through the rest of the fat pack box, you calculate that the most expensive card in the box is his Flamewake Phoenix, and that’s only because it managed to stay near mint. You look this guy in the eye and see his hopes, his dreams. You see his ears, ready to hear the words, “I’ll give you $30 for everything.” It’s such an innocent face, completely unaware that its entire world is about to be turned upside down. You have to breach the subject gently, ease into it.

“Look, Marcus… Some rares are worth more than others. Those are the ones that have a lot of demand to tournament players, and are the reason that players buy booster packs. Unfortunately, I… I don’t see any of those particular rares in here. There are a lot of rares in Magic that… that aren’t worth more than a dime. Even a lot of commons and uncommons can be worth more than those rares, and we in the buying and selling business tend to call them ‘bulk rares.’ I’m sorry to burst your bubble, but… all of these rares are bulk rares. I know that you loved them, and, uh, tried to take care of them… but there’s nothing we can do here.”

See? Exactly like telling someone their parents are dead. It’s another reason I hate MTG finance, but someone’s gotta do it. I have to be the buyer and seller that my small college city wants, and the one it needs. Let’s be real here: my bottomless money pit is needed by all of those looking to unload their collections to me.

3. Having Any Competition At All

As one of the high-rolleriest high-rollers in the business, it absolutely shocks me that I don’t have swarms of Magic players knocking on my door to unload their stacks of gem-mint Beta power. I mean, how come this poor soul gets to find a decent-sized collection through his connections? I’m pretty sure I live within eight hours of that guy, and somehow he didn’t bring the collection straight to me. I post Craigslist ads in my local area, have henchmen that distribute business cards across the tri-state area, and even occasionally post to Facebook groups where I’m using my oodles of cash to purchase huge collections at below buylist prices. For some reason, my potential customers still end up occasionally visiting other competing stores or financiers, and giving their delicious profit cardboard to people that aren’t me. 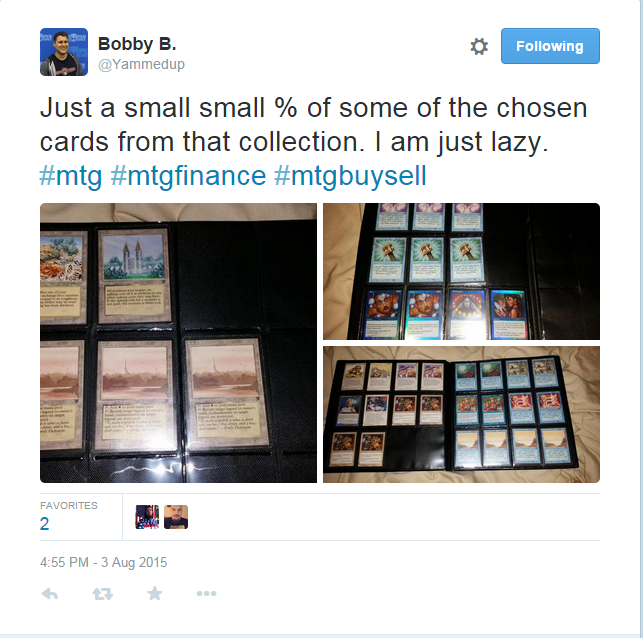 This is another tweet that leaves me sick to my stomach. Bobby is a great guy and also located on the east coast like myself, and yet he’s displaying pictures of quality Magic: The Gathering cards that I do not personally own. He’s making my MTG finance monopoly much more difficult to establish by undercutting my personal profits through sweet deals and quality salesmanship. If he would just ship that entire collection to me for below buylist prices, it would make everything so much easier, and MTG finance would be a much less stressful job.

Now some of  you are probably thinking: “But High Arbiter of MTG finance, how are you going to sell cards if you buy all of the collections and cards in your area? Won’t that drop tournament attendance, reduce the amount of Magic being played, and put stores out of business?” Well, young and budding financier in training, all of those will almost certainly happen. What you’re forgetting to take into account, though, is that I’ll be able to sell all of those Magic cards that I buy to my secret underground network of vendors across the world, and I’ll make a lot of money. I’m switching the structure of my bed to be composed of foil copies of Jace, Vryn’s Prodigy to keep up with the “poor person” fashion style, and living this lifestyle can be a struggle filled with sacrifices and trials. Or something like that. Hold on, let me get the door. Pete is here with my Jaces.

Sometimes, I think about having subordinates who will aid me in the massive undertaking that is shipping out my card orders everyday. I absolutely loathe doing it all myself, because it involves actually looking away from the Netflix screen for a few seconds to write down addresses on envelopes, print shipping labels, and other boring crap. I even have to pull the cards out of my solid gold trade binders myself, like some kind of blue-collar animal.

While I obviously mentioned that I already have henchman distributing my business cards, I unfortunately cannot trust them with the task of handling my vast fortune of cards. They work purely through the motivation of fear and intimidation, and have every reason to try and rob me of my hard-earned profits. I cannot let them near my empire, and must handle this dark burden of shipping and packaging alone.

On another note, can you believe how annoying some customers get? They feel that it’s okay to waste my time by making “small orders” like a stupid Modern Jund list, or a foiled out Standard deck. Like, why even waste my time if you’re not going to drop $20K on Alpha power? If you want that type of peasantry, just shop at TCGplayer or something. Ugh.

Yeah, the End Step is still here. I’m not some god damn monster who’s just going to complain for this entire article and then not impart any actionable knowledge into your grasping minds.

Here. Sell these Magic cards if you’ve got ’em. If you were in on them before the Pro Tour, give yourself a pat on the back, and then sell them.

You know where to reach me. I’ll return at the same time next week, with some absurdly useful MTG finance tips. You’re welcome.

26 thoughts on “The Reasons Why I Hate Magic Finance”