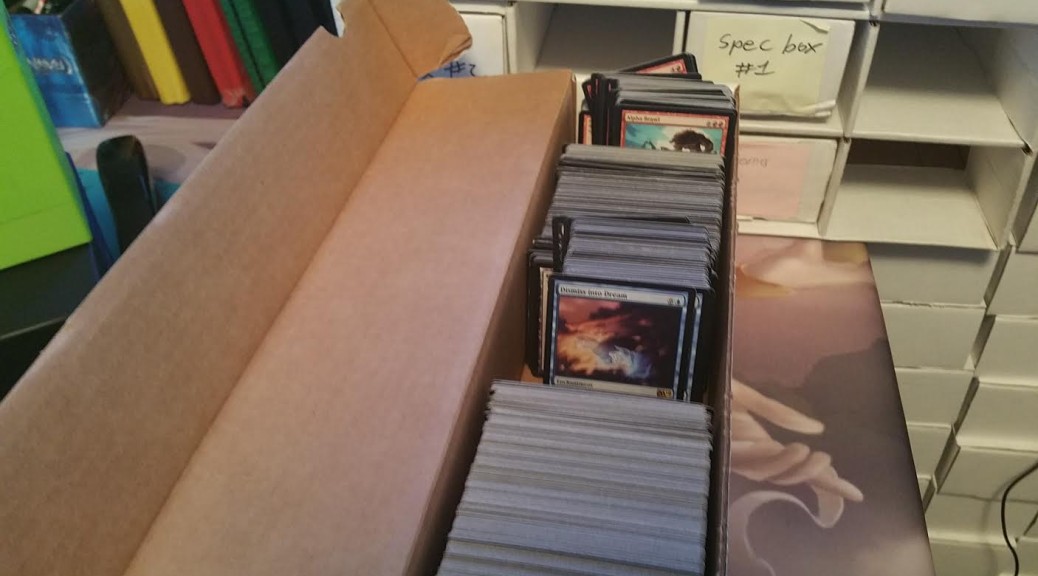 Remember how last week I wrote about how I wasn’t going to try to find the next Outpost Siege or Mastery of the Unseen? While they’re both from a small and relatively unopened set and saw competitive play, they yielded very short-lived spikes that provided a limited window for making money before crashing to their previous fake-bulk-rare statuses. If you follow either me or MTGPrice’s own Sigmund Ausfresser on Twitter, then you may have seen this conversation pop up a couple days ago: 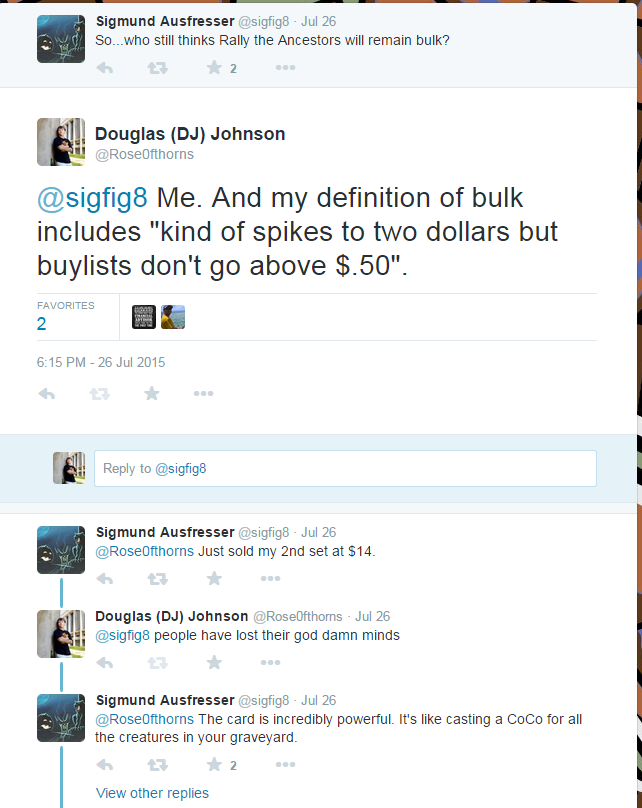 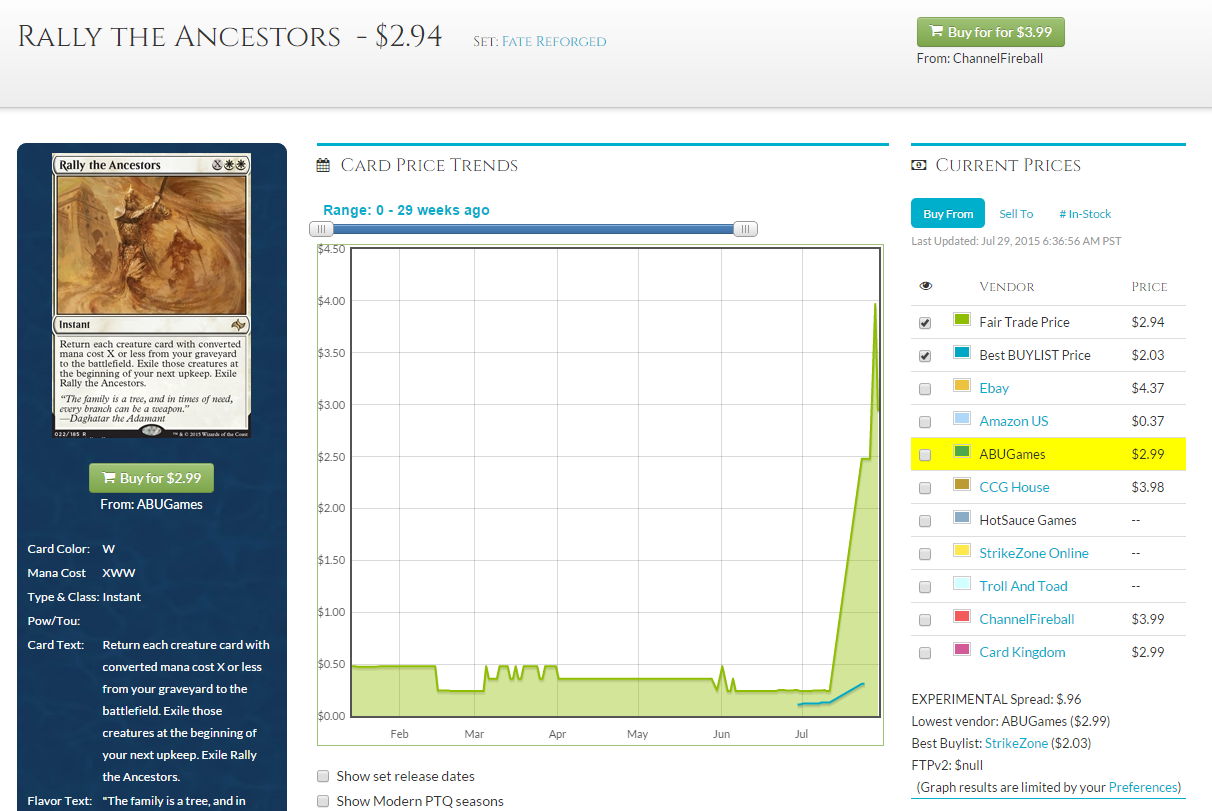 In my opinion,  Rally the Ancestors is the next version of Outpost Siege or Mastery of the Unseen. It saw camera time for a few minutes, smashed an event, and jumped on a hype train to $3 town. Sigmund and I disagreed in that I suggested that buying in at $1 is not correct, where he believes it could be a $5 card for long enough to make a reasonable amount of profit. As someone who refuses to pay retail on Magic cards practically on principle, I did not like the $1 buy-in on a Standard legal rare when I felt that buylists wouldn’t peak past 50 cents. I’ve seen too many Standard cards crash and burn to want to be a part of this, so I put my cards where my mouth/virtual pen is: 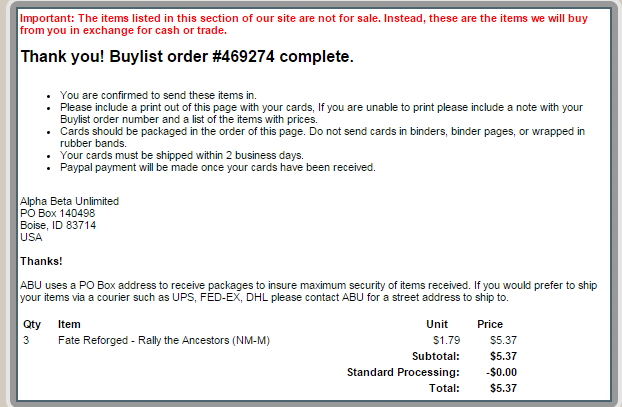 I only owned three copies of Rally, but I only paid 30 cents total for all of them. That’s one of those neat little side advantages for when you offer to buy or trade for everyone’s bulk rares at 10 cents each. As soon as Twitter proved me wrong about buylists willing to rally together about Rally, I dumped the few copies I had to ABUGames for a free $5, allowing me to move on to the next purchase. More often than not, that purchase will be buying staples at below buylist from people who have a need to sell. I’d rather spend that $5 on a Godless Shrine from someone who needs to pay her car insurance than on five copies of Rally the Ancestor while crossing my fingers and praying that they hit $2 to $2.50 on a buylist.

So About That Title…

Oh, right. I had this amazing ide—I mean…

Jared Tomlinson had this amazing idea where I’d go through and detail what my daily ritual as an MTG finance guy was. Let’s do that, because it sounds like fun, and I’m always a fan of being an open book about what my work actually looks like.

Dawn of the First Day 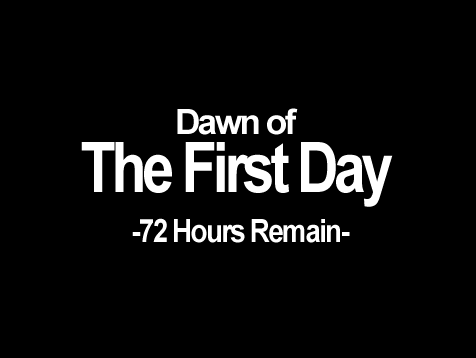 Everyone should get used to checking the MTGstocks Interests page every day, including the oft-forgotten foils tab. Add it into your morning routine, check it while you’re eating breakfast or in the shower. This is one of the best ways to maintain an up-to-date finger on the pulse of what spikes have already happened, and it’s also a good way to predict future spikes before they happen. Without this page, I wouldn’t know that Life from the Loam had crept back up to $8 over the course of a few months. 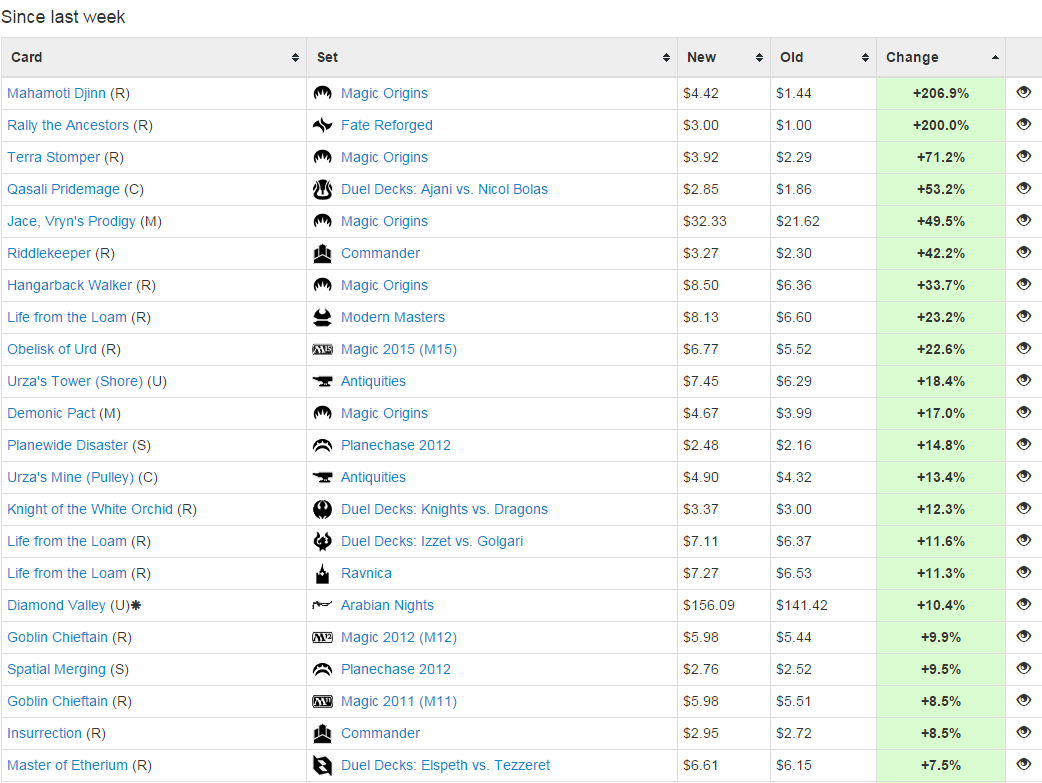 On a similar note, my daily ritual also includes scanning through my email for any new collection sellers, reader emails, school info, and ProTrader daily emails. If you’re not a ProTrader and are interested in becoming one, the the daily emails resemble something like this: 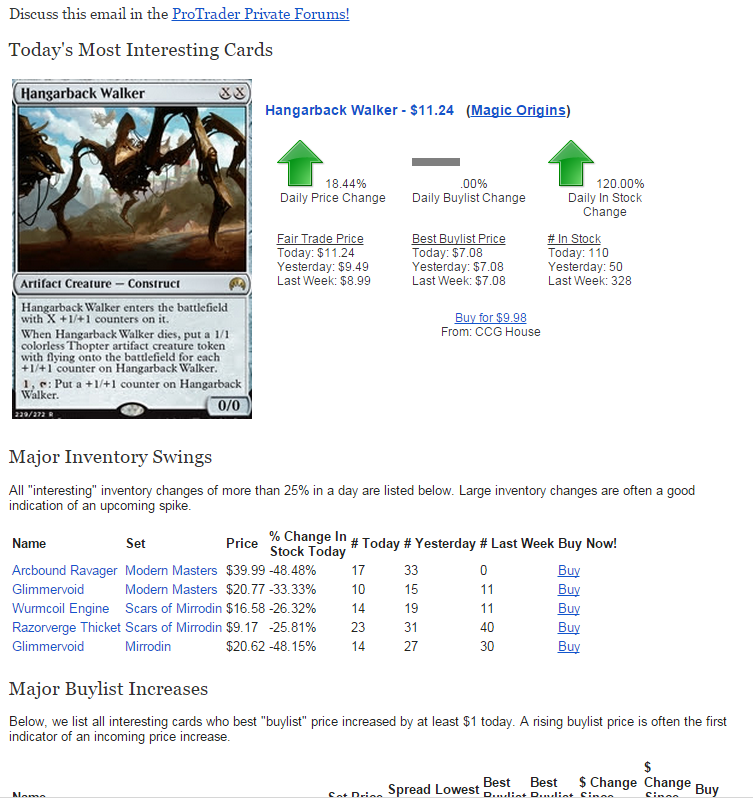 We have a lot of detailed and up-to-date information on the most recent inventory shifts from major stores, note buylist changes on hot cards, and inspire lots of regret when you realize you didn’t buy Hangarback Walker at $1 even though you just needed one for your artifact EDH deck. While I don’t get a whole ton of emails about my Craigslist advertisement, I still try to update the listing once a month or so. A lot of the casual players or returners who  buy my instant-collection 1K boxes end up being recurring customers who keep my phone number for future reference. 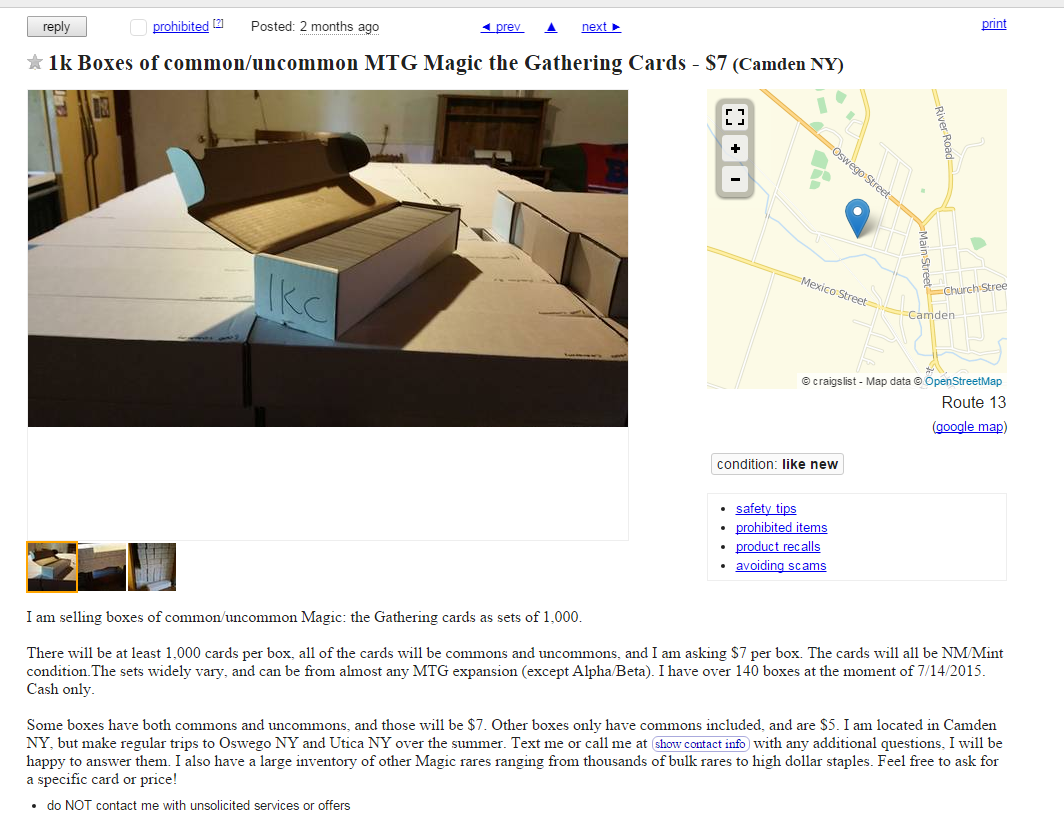 Call Me, Beep Me

Speaking of “customers keeping my phone number for future use,” locals texting me about their needs is one of my biggest outs for cards. I’ve talked about this at length before, but it’s the biggest lesson I think I can impart about how to make money off of this game: be the first one that everyone texts to buy or sell their cards. Networking is key, and I like to think I’ve gotten pretty good at it. 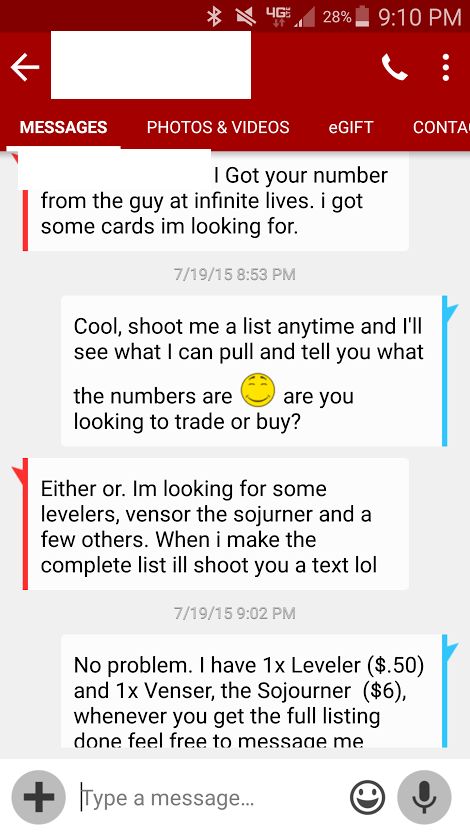 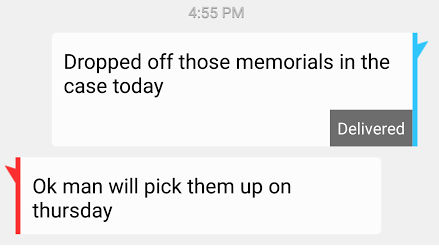 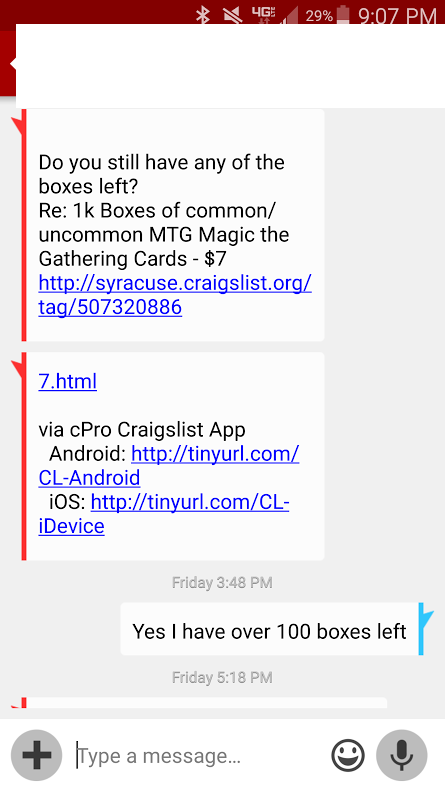 As such, part of my daily MTG finance ritual is pulling out lists that I get sent, compiling them into neat little piles, and giving out price quotes on how much a list will cost a customer. Sometimes I have to use outside resources to complete the full list that I’m sent, and that’s where PucaTrade comes in very handy. 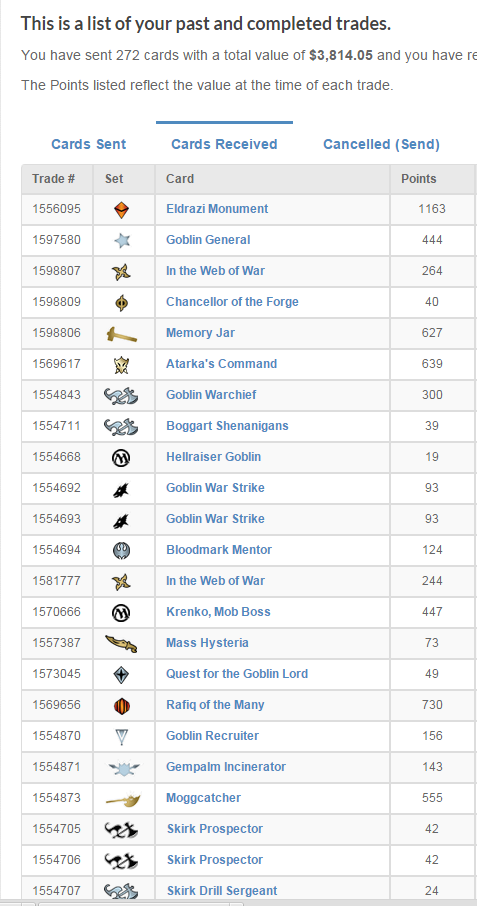 When you can sell cards locally at close to full retail, buying PucaPoints from third-party sources at 70 cents per 100 points doesn’t seem like a bad deal. I buy a bunch of points, wait for a list to come to my phone, and then end up selling the cards that I pick up from Puca at close to TCGplayer mid, depending on what the cards are. I use Twitter, Facebook groups, and the PucaTrade subreddit to find third-party PucaPoint sellers, and treat it just like a Facebook collection purchase: I only buy if the seller is reputable with multiple references that can be confirmed, and pay with Paypal non-gift if there are any questions about the seller’s ability to immediately send me the points. So far I’ve had zero troubles, though, and don’t mind jumping through a single extra hoop to convert PucaPoints into cash at a 100-percent rate.

Finally, let’s talk about my display case that I mention in almost every single article I write. Contrary to what might be popular belief, I don’t have some huge LGS-level inventory that’s constantly filled with shocks, fetches, dual lands, and other staples. Because the videogame store where the case is located doesn’t hold FNMs or other Magic tournaments, there isn’t a huge demand for staples in the case. The competitive players all know me and can text me like in the above situations if they need staples. 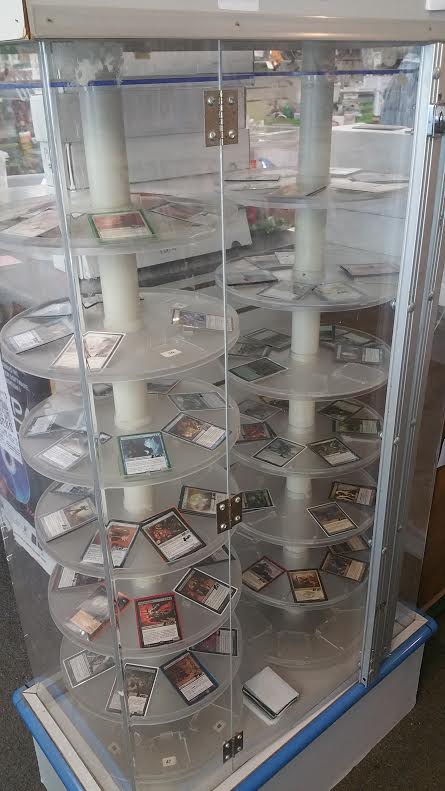 So what do I fill the case with? Well, mainly I just throw a bunch of $1 to $3 cards in it that are popular in EDH or casual deck archetypes. When I first started out with the case, I initially had it full of Vendilion Cliques, Tundras, and other pricey, competitive cards. I stocked lots of high-end staples at reasonable prices, and I expected to sell a bunch of them to the competitive players in my area. The problem was that most of the Magic players coming into the store were gamers of a different breed: they were looking for N64s, Xbox controllers, and Nintendo DS cartridges, and they played Magic on the side as a kitchen-table hobby. They didn’t care for the $70 singles in the case, so I adapted and made some changes. Although the case doesn’t look like anything special, I sell a lot more copies of Reliquary Tower, Sanguine Bond, and Imperious Perfect now than I ever sold of Steam Vents.

And just in case I do find a wayward competitive player who didn’t expect the video game store to sell Magic cards, I have a full stock of business cards behind the counter for the employees to hand out. If someone is looking for a complete Modern Affinity deck, they’re more than welcome to text, call, or email me and we can work something out where I compile the cards for their own list.

If you’re thinking to yourself, “Lol, that case has like practically nothing in it,” then I don’t blame you. I probably only sell 15 to 20 cards a week out of it, and the $1 to $3 rares don’t make me a massive amount of money. I get more from the 1K boxes and 25-cent bulk rare boxes that sit above and next to the case, and they’re more consistent sellers. 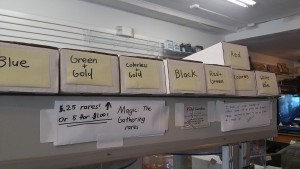 However, the presence of my cards in a physical retail store offers me a larger advantage on collection buying than most of the other competitive buyers in my area. Instead of a Craigslist-esque meeting where you agree to meet under a Walmart street lamp at 10:00 p.m. while wearing dark baggy clothing, it’s much more simple for me to tell people to meet me at an established retail location where I can sit on the other end of a counter before I roll out the typical vendor mat. 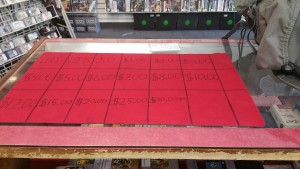 I even get collections sent to me that I wouldn’t have gotten otherwise without the storefront. Believe it or not, there’s an overlap between people walking into a used video game store who are looking to relive their childhood memories with Mario Kart 64 and those who have old collections of Magic cards in their basement that they’ve forgotten about. Every now and then, my old manager at Infinite Lives tells me about a conversation he had that went something like this:

Seller: “Hey, I used to play Magic. I didn’t know you guys sold the cards here.”

IL: “Yep. We have a guy who comes in and fills up the case. He does this for a job.”

Seller: “Does he buy cards? I think I have a bunch in my basement from like ten years ago.”

IL: “Yep, here’s his business card. Call or text him and he’ll be glad to look through your stuff.”

While most of you probably don’t have this type of situation, I think it’s important to look around at the connections you might be able to make, niches to fill, and see if you can’t establish a position in the community similar to what I’ve done. It wasn’t more than a few years ago that I was a simple high-school FNM grinder with limited cash from a part-time job at K-Mart. If I can turn this into a daily ritual with multiple sources of income, anyone can. Good luck!

As always, feel free to shoot out any comments or questions using the multiple methods you have available. If this article shows anything, it’s that I’m an easy-to-contact individual.