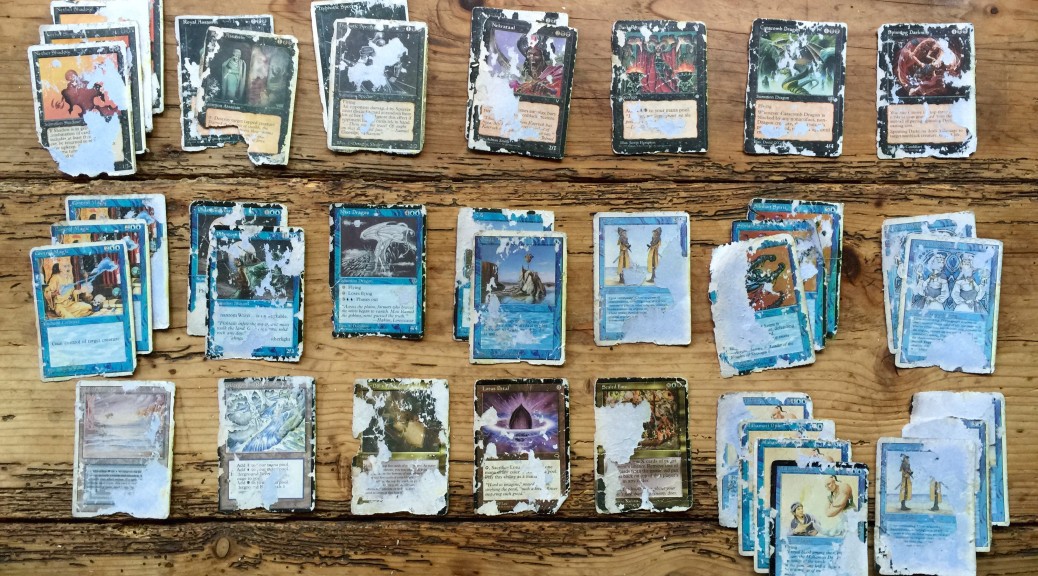 “I just want the cheapest copy you have. It’s for personal play, and I’m just trying to build the deck on a budget.”

–Probably one of my local customers

Man, I misuse quotations a lot. You wouldn’t know this if I didn’t tell you, but I didn’t actually  document that quote from some local guy I know. I mean, people have said similar stuff to me over the years, but I probably shouldn’t use actual quotation marks for it.

Anyway, what have we got to write about this week? Fetches? Boring. From the Vault: Lack of Linvala?  I really don’t care. I’d rather continue on my track as a brilliant comedy writer who basically wrote A Modest Proposal in MTG finance form (it’s right freaking here, for those who haven’t read it). As much as I’d love to continue writing satire and reading the comments, I do kind of get paid to provide useful and actionable financial information about our lovable little economy. I’m hopping back to more of a Finance 101 topic this week, where we’ll go over card conditions and why you shouldn’t write off buying and selling slightly played (SP), moderately played (MP), and heavily played (HP) cards.

Let’s go back to that opening made-up quote. This more often applies to Legacy, Modern, or EDH than Standard, where the prices on dual lands, fetches, and older staples are symbolic of there not being enough to go around. Not all of the original dual lands have withstood the past twenty years of wear, and the ones that have been used as sandpaper have a price tag to show it. As a result of this, players on a budget who just care about the end result of finishing their decks are more often than not willing to sacrifice card condition to complete that goal.

Take a look at this Tundra, for example: it was one of the first dual lands I ever picked up, and I paid approximately 50 percent of retail for it, because it looks like someone smoked a cigarette directly onto the card for two days straight. (Seriously. The pictures below don’t capture just how yellow the card is.) 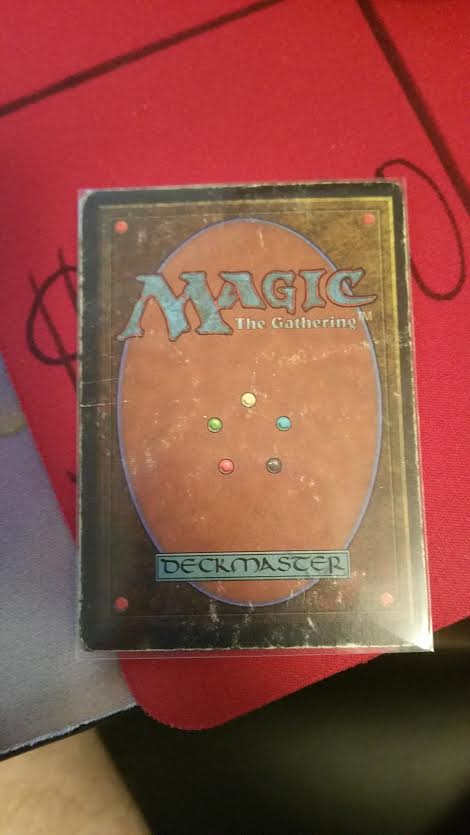 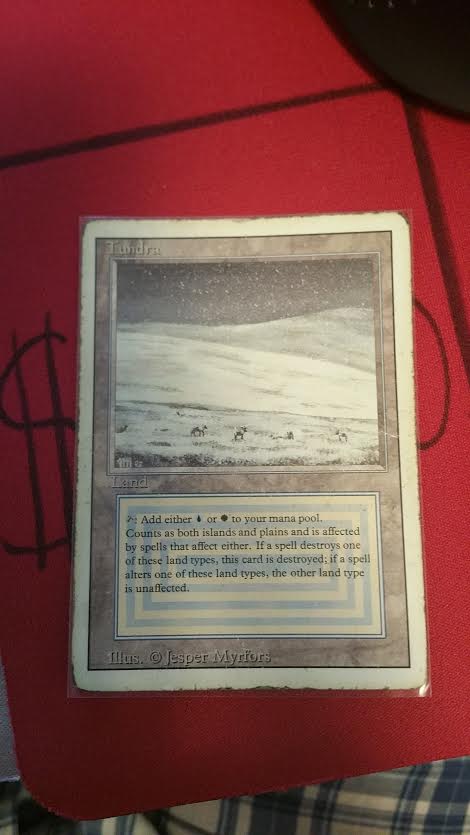 “Yes, DJ. Used merchandise sells for cheaper than brand new stuff. That’s obvious. Why are you telling me this?”

Well, Mr. Stereotypical Devil’s Advocate Who So Many MTG Financiers Invoke in Their Articles, I’ll tell you a few things that you can use to take advantage of in the field of less-than-NM cards.

StarCityGames.com gets a lot of flak for having singles that are  often priced higher than the rest of the internet, but I’ve never seen a more strict grading system in action when ordering cards from the company. Last year, I ordered 40 copies of Ghave, Guru of Spores from SCG. Ten of those were NM and 30 were SP, and I paid 50 cents less on each of the SP copies. When the cards arrived, I couldn’t even tell that some of them were SP. I ended up grading around half of them as NM, and sold several on TCGplayer and out of my local display case as NM with no complaints.

If you’re ever looking to go deep on a particular spec target, I highly recommend checking out the SP and MP sections of SCG. My local customers will tell you that I’m a tough grader, and even I had trouble finding marks on the cards that would justifiy them being slightly played. Another side benefit of ordering from SCG will be that you’ll be guaranteed to have your order shipped to you, with no concern over cancellation or shipping worries.

On the Other Hand…

Let’s say you have a card that you graded as NM, and you throw it up on TCGplayer. You sell the card, package it up, ship it out, you know the drill. You’re happy to have a sale. However, you get a message about a week later. The buyer is unhappy with the condition of the card because he found a nick or two that he believes knocks it down to SP. Now they want a refund—either a partial return on their purchase for the condition or a full refund with them shipping the card back to you. Sometimes they’re correct, and sometimes they’re just being too critical of a grader. Neither of those choices are very appealing though, and unfortunately, there’s not a whole lot you can do about it.

However, I’ve never had anyone counterclaim my grading of SP or worse cards. The line in the sand between SP and MP can often be blurry, and I’ve definitely listed some cards on TCGplayer as SP that some people might argue as being MP. Even so, buyers have never messaged me about it. They purchased the card expecting some amount of wear, and were satisfied with their purchase costing less than an otherwise minty version would have run them. If you err on the safe side and list it as SP, you’ll remove most picky graders from the equation and not suffer a huge loss in the process. I’m not suggesting to list this thing… 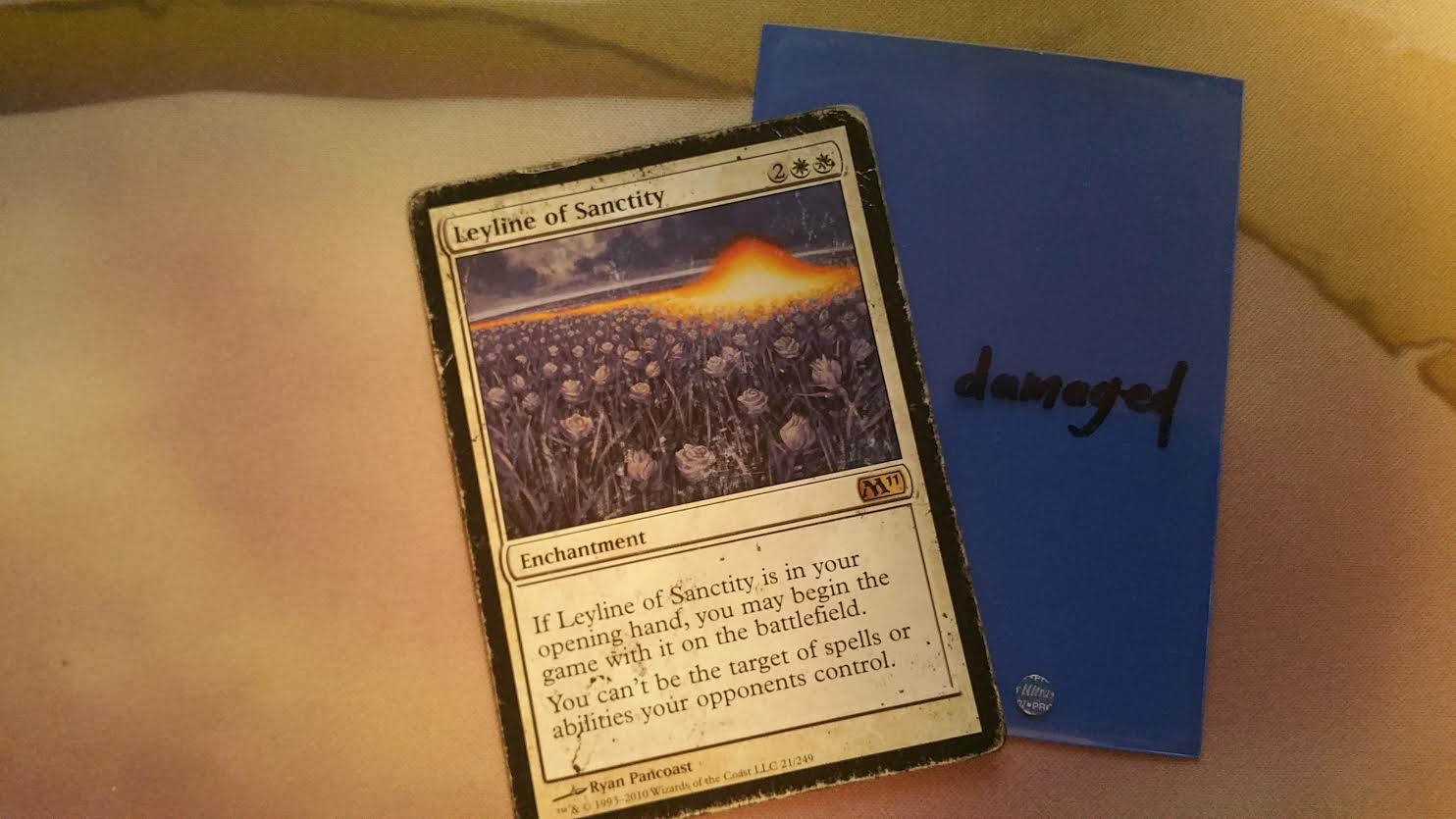 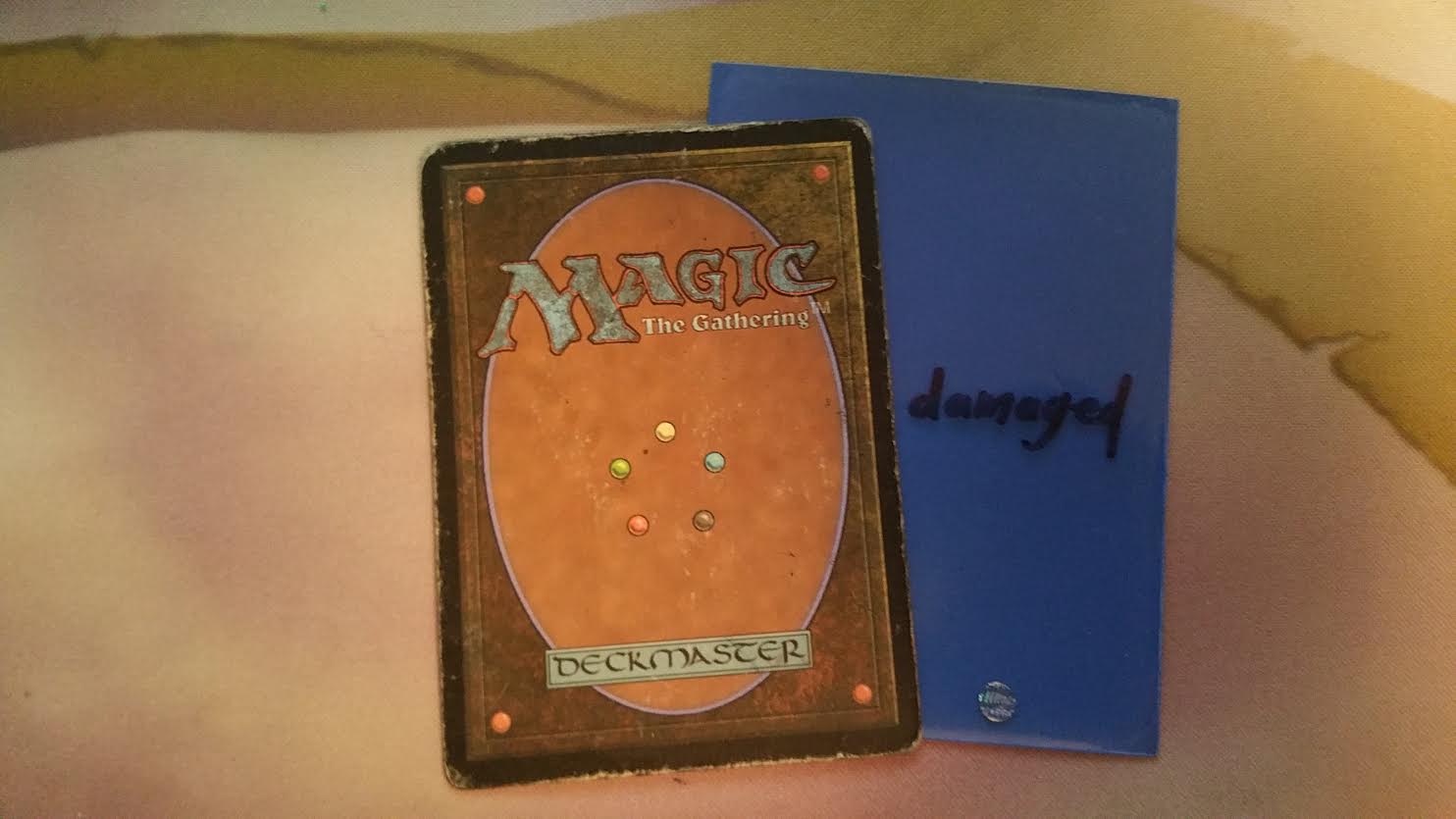 …as “SP” and cross your fingers hoping that you don’t get hate mail, but you can probably get away with posting it as HP instead of just straight up “damaged.”

If you’re new to Magic or to the seller’s side of the game, I recommend checking out TCGplayer’s condition guide for grading. While I think it might be a little bit too strict on the definition of LP or MP, it certainly gets the job done if you’re trying to successfully sell on TCGplayer or eBay.

Only the NM Shall Pass

When trying to sell off SP and worse cards, it’s important to remember that some businesses don’t allow you to trade or sell them. PucaTrade is a website where a lot of heated discussion over condition takes place. Some users don’t take the time to read the requirements of sending a card, and don’t understand that unless notifying their trade partner beforehand, it is not okay to ship out cards that are SP or worse condition while expecting the full point value.

StrikeZoneOnline is a vendor with a buylist that only accepts NM cards, and grades extremely strictly. If you send cards that are even close to questionable on condition, StrikeZone will send you back the cards that they rejected and remove the cost of shipping from your payment amount. If you’re an inexperienced buylister and ship to them expecting to get a simple “condition discount” like CardKingdom offers, then you’ll end up very disappointed. StrikeZone will almost always pay top dollar on foils if you keep your eye out on their graph line on MTGPrice, but you need to be sure that there’s absolutely no clouding, smudging, or edge wear at all before you send the company cards. Interestingly enough, I’ve found StrikeZone’s grading system to be much more lax in person when I sit down to sell to them at Grands Prix. I don’t know if this is because it’s harder to be strict when you have someone sitting across from you to dispute your grading, but I’ve definitely shipped the company SP cards in person and been paid in full.

Everything Comes Back to Cube/Commander

It seems like every time I write an article, there’s at least some mention of Commander or Cube. These two formats allow for some of the most unique personal expression in Magic, and have some of the more interesting house rules or restrictions when building, so it’s no wonder that financiers can end up finding unique ways to cater to these types of players. I once attended an SCG Open and spectated a draft where a player had a cube composed of entirely HP or worse non-foil cards.

He didn’t want to pay the full price to obtain his otherwise expensive cube, so he decided to make a game out of building the cube itself, while at the same time helping the cube be more affordable. The Jace, the Mind Sculptor in that cube looked like it had been used to paint somebody’s driveway, and certain text boxes weren’t even visible anymore. However, he proudly explained that he had only paid $40 to a vendor that was dying to get rid of it, as he ticked up the loyalty on a card who’s initial loyalty placement in the bottom right had been peeled away at some point.

If you’re trying to build a budget cube without dropping the power level to commons and uncommons only, then this might be your way to go. Challenge yourself to only include cards that you find in the parking lot, or something to that effect, and you’ll be done in no time. While I’ve never actually seen someone do the same with a Commander deck, it could certainly be done, and it would be a much cheaper alternative that comes with a story every time you sit down to play it.

If you’re a fellow Redditor and looking to see some of the most destroyed cards that Magic has to offer, I recommend indulging in MTGgore. While a “flip it or rip it” phase seems to have taken over a little bit, there’s some sort of sick pleasure obtained from looking at picture of a Legacy deck that just went through the wash. It’s like watching a dumpster fire: there’s no value to it, but you just can’t look away.