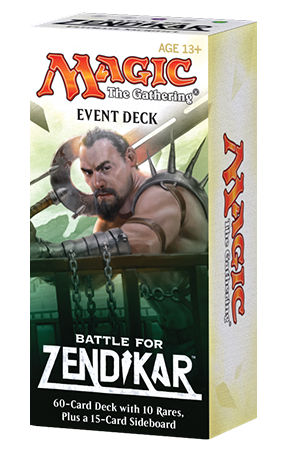 I woke up last Friday to this message a fellow mtgfinance enthusiast at my LGS . The Battle for Zendikar Event Deck’s list was announced on Thursday 8 a.m. PST (which is around 11 p.m. Malaysian time on Thursday). As I glanced through the decklist, I had a sinking feeling in my stomach. And I was sure as hell it wasn’t because I have yet to ingest my compulsary dose of morning caffeine.

If you have yet to see the decklist, check out Corbin’s (@chosler88) post about the Event Deck for his thoughts on the impact of the reprints.

Here are the notable cards that you’ll be able to find in the value-fest that is the Battle for Zendikar Event Deck:

What!? Since when do Wizards chuck in mythics in Event Decks. Two mythics!?

I was dismayed to see Whisperwood Elemental included in the decklist.  I was bullish on Whisperwood Elemental as a mythic with an incredible potential for price growth in the new Standard landscape we are hurtling towards this October. Whisperwood has the making of a breakout card in financial terms. It’s a Standard staple with a track record in aggro and midrange decks. It’s a mythic from a small set.  And it was hovering around $6 – $7 for the previous few months, probably as low as a small set Standard staple mythic could go. Whisperwood Elemental could spike to the $15 – $20 range if it becomes the premier green five drop in the Battle for Zendikar Standard, an outcome which I am quite confident about considering Whisperwood’s power level and the new unconditional creature removal being sorcery speed.

It all changed when Wizards decided that they are going to reprint mythics in Standard supplemental products. Whisperwood is now $5 and I doubt it would be able to hit even $15 anymore. While the influx in supply from the Event Deck is marginal, it does affect the perception regarding the financial potential of the Elemental. I also pity the fool who went in deep on Warden of the First Tree.

The most recent supplementary product designed for Standard, the Magic Origins Clash Pack, packed a little more value than usual with Standard and Modern staples like Windswept Heath, Collected Company and Siege Rhino, and Standard and Modern playables like Dromoka’s Command and Anafenza, Kin-Tree Spirit. But it was not too much of a surprise as high value rares like Hero’s Downfall and Thragtusk had seen reprint in these products. The inclusion of a fetchland was also not novel. Verdant Catacombs was in the Magic 2012 Event Deck.

Why Spec on Standard Mythics?

In the era where rare is the new uncommon, playable but homeless Standard mythics makes for better short-term spec targets compared to rare as mythics offer a significantly better multiplier at only a slightly increased cost.

Take Perilous Vault for example. The Magic 2015 mythic dropped all the way to $3 in September 2014, right before Khans of Tarkir rotated in. The colorless nuke found a home when Blue-Black Control made its debut at Pro Tour Khans of Tarkir in October and subsequently tripled in price to $10. It’s not a majestic spike, but 300% growth within a month or two is decent return for a $3 investment. 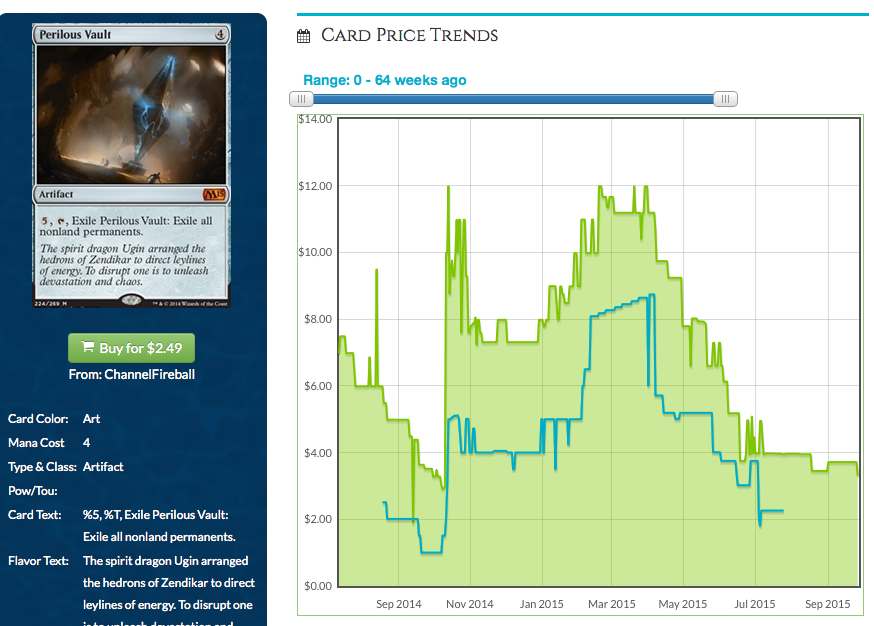 Sometimes you don’t even need to wait for rotation to happen, as with the case of See the Unwritten, a card which fellow MTGPrice writer, James Chillcott (@MTGCritic) and I have been bullish about. It recently spike from $3 to $8 (about time!) on the anticipation that it would be used to cheat in Eldrazi et al. 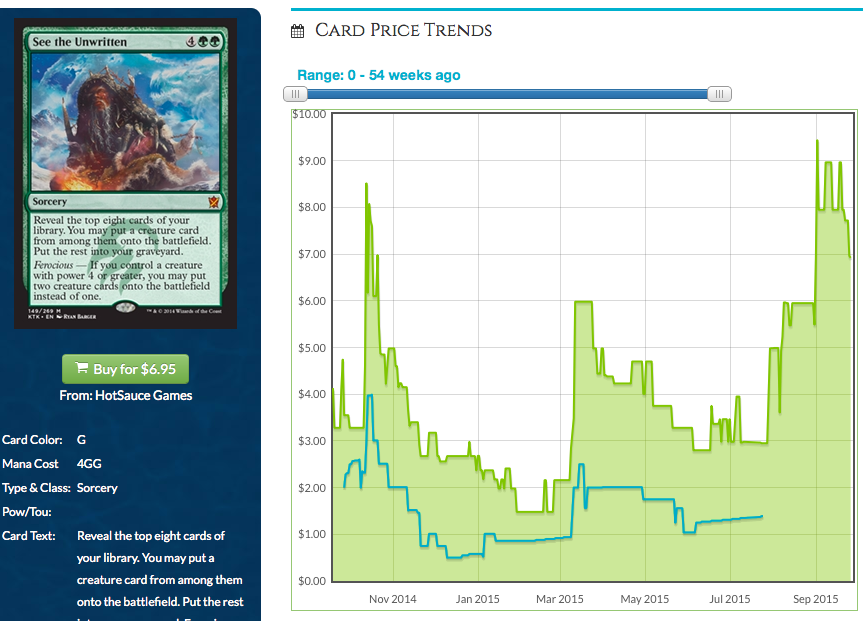 Now that Wizards is encroaching into mythic territory for cards deemed fit to be reprinted in Event Deck/Clash Pack products (they alternate each product between sets), the notion that playable Standard mythics at rock bottom are relatively low risk short-term specs no longer hold true. With mythics are no longer immune to an Event Deck/Clash Pack reprint, buying into future Perilous Vaults and See the Unwritten just got a lot riskier.

Ultimately Wizards’ priority is to ensure that competitive staples are sufficiently accessible to keep the competitive scene as inclusive as possible (plus it sells products). As a competitive player, I do welcome that move as it means that I would be able to secure my playset of Hangarback Walker at a reasonable price after missing the boat on that one.

As a financier, Wizards’ increasingly trigger happy inclination to reprint and repress price of staples forces me to reconsider my approach to short-term Standard mythic specs. 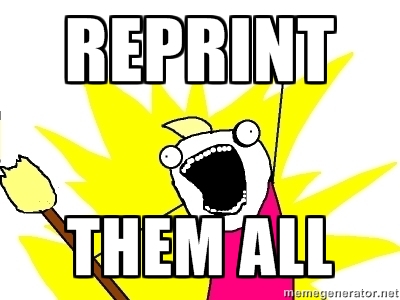 The risk with Event Decks/Clash Packs reprints resides in the fact that it is hard to predict when, or rather which Event Deck/Clash Pack would reprint which mythic. There is a class of Standard mythics that follow a more predictable reprinting.

Standard planeswalkers reprints are reserved for the spring Duel Deck,  which means that they still make relatively safe short-term/rotation spec. Playable planeswalkers at rock bottom often spike come rotation,  along the lines of Xenagos, the Reveler and Ashiok, Nightmare Weaver during the previous rotation. 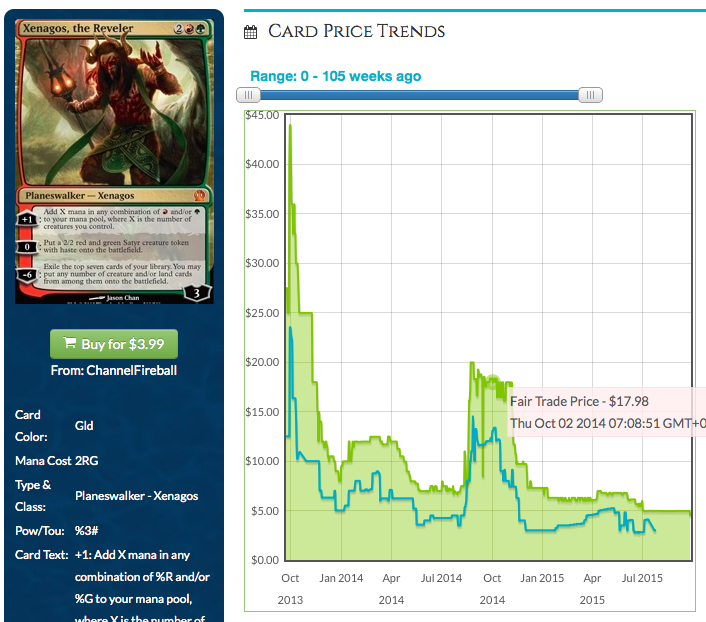 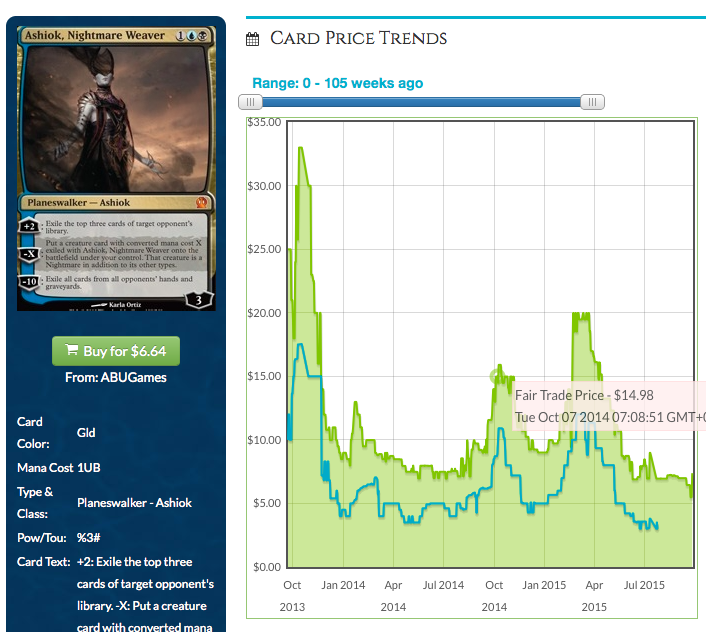 The announcement for next spring’s Duel Deck comes late October or early November, so make sure you cash out of any short-term. planeswalker spec by then.

Siege Rhino is still in Standard and who better to accompany a crash of rhinos than Sorin, Solem Visitor, who is just $8 now. Now that Stormbreath Dragon is a myth of Standard past, it may be time for Sarkhan, the Dragonspeaker to soar the skies for good as the premier sticky red five drop. Oh also, did I mentioned that now your opponent can’t kill your Sarkhan with his Form of the Dragon on the stack?

Wizards’ increasingly trigger happy reprint policy is not all doom-and-gloom for financiers. Even if you do not grind Standard, there is a positive note to the phenomenon. Granted, the biggest casualty is the increased risk in short-term speculation. The other side of the coin is that Wizards’ aggressive reprint of high value Standard rares in their Event Decks/Clash Packs widens the window in which you could pick them up for long-term spec.

A good number of expensive Standard rares in recent times were expensive because they found a home in Modern. Collected Company hit double digits (and hovered near $20 briefly) but Den Protector did not because Collected Company spawned new archetypes in Modern and made Elves tier one while Den Protector is strictly worse than Eternal Witness in Modern. Tasigur barely sees Standard play but the amount of eternal play he sees made him the most expensive rare in Fate Reforged. And I don’t think many would complain about Windswept Heath dropping back to $12 after the Khans of Tarkir fetches trended upwards during the summer. You can bet that Tasigur, Collected Company and Windswept Heath will appreciate at a decent rate in the following years as Modern staples.

These Event Deck/Clash Pack reprints creates another window, or extends the current window to pick up these cards as long-term investments. For financiers without a huge budget, or those who have to split their budget between specs and maintaining a competitive Standard card pool, this is likely to be welcome news. Personally, I could never pick up all the specs I have on my specs list for the month as I grind the competitive scene as well and I can’t just sink 90% of my Magic budget into a truckload of Tasigur when he bottomed at $6. Tasigur dropped from $8.50 to $6.50 after last week’s announcement, giving me another window to pick him up at rock bottom amid securing Battle for Zendikar staples.