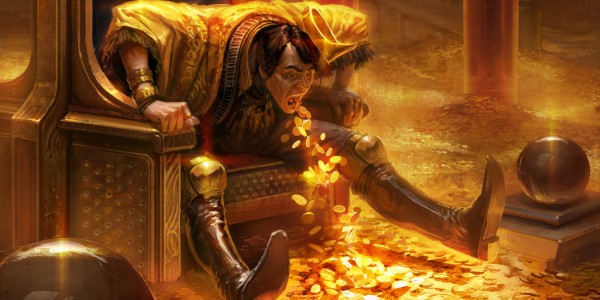 As you may (or may not be) aware, fat packs are a hard commodity to come by these days. It really pains me to write this but Battle for Zendikar has only been out for a week and it seems like every local game store is already out of stock of BFZ fat packs. Umm… wow! That is some serious demand for full art lands.

The first pieces of evidence to stream in to Reddit include this posting, which stated that all sealed BFZ product for the player’s store was already out of stock. This by itself isn’t concerning since some stores pretty much always sell out of product quickly, especially if the store is smaller and there just aren’t many places around the area to buy product on release day. Next up we have this account from another player about how the store sold out of preorders almost immediately for fat packs, and that the store was actually telling people to buy the fat packs at big box Target and Walmart since they didn’t have any in stock and couldn’t order more. This is just so crazy, since the players were willing and ready to keep spending money at the LGS, and now that business has gone away from the LGS and spent at the big box stores. This shortage of fat packs boils down to the fact that Wizards only does one print run for fat packs – and this is how it has always been done in the past. Once that first print run has been sold out, there are no more to be had. This is why Zendikar fat packs are so crazy expensive. They are all first print run, which means that if you want to still try and play the hidden treasure lottery the fat packs give you a legitimate chance to pull a hidden treasure since all the fat packs are guaranteed to contain first run packs.

It has gotten so bad that Deriums, a store that has a huge online presence and is closely connect to the Magic community, has gone out of their way to explain why fat pack prices cannot (and most likely will never be) MSRP prices at local game stores. It all started with this video that Deriums put up on Reddit explaining why the fat pack prices are going to stay at $55 or higher MSRP as your local game store.

Of course, as the post aged more and more users were calling Deriums out as justifying a price hike (or even claiming outright greed) by overcharging their customers for a currently hot product. However, Deriums quickly responded to these criticisms by showing evidence that Wizards has already taken the fat packs off of the product reorder list in their restock emails to stores and distributors.

In the usual Deriums style, he says that if you think he is lying to you or scamming the community that you should report him to Wizards. He stated that if he was on the other side of the fence that he would do the same thing if he thought a store was price gouging by lying to their customers about the availability in order to increase the price.

However, his thoughts were about the CURRENT information we have about fat packs in the past – if you recall, Wizards was able to add more Mind Seize decks in later shipments of Commander 2013 print runs due to an outcry from players looking to pick up (at-the-time) Legacy staple True-Name Nemesis. We’ll probably be seeing the same type of response from Wizards for BFZ fat packs, since the demand is clearly, CLEARLY there for fat packs and players should be able to buy them from local game stores and support their community. Right now, it is a choice between two evils – do you knowingly price gouge yourself and support your LGS, or do you get the fat pack for MSRP but buy from the evil corporation?

Let’s go over two of the counter-arguments for not price gouging yourself. We’ll first go to Tolarian Community College, who released last weekend his fat pack review for Battle for Zendikar. It gives great coverage to the fact that for MSRP $40 the fat pack is worth it, at least compared to past fat packs that didn’t contain full art lands. The Professor also spends a great amount of time going over that the land pack will only cost you $12-$15 if you get the lands separately, whether it is through TCGPlayer or Pucatrade (20 to 30 Pucapoints per BFZ full art land). So if you’re looking to buy a fat pack for the lands, it’s better just to pick them up individually or just get them slowly over time through drafts. He also pointed out the Star City Games and Channel Fireball are both charging $60 per fat pack, and we all know that many LGS’s go by SCG or CFB prices (but did not add that there was only one wave of fat packs released, which is why the price is so high). In the end, he actually advocates buying through Target or Walmart for this product (he never does this, by the way, so I was very surprised to hear him recommend this) if your LGS won’t budge on price.

Second, MTGHeadQuarters released an angry video about local game stores selling fat packs above MSRP and how it is wrong to price gouge your customers so much. His argument is that even though there is a ton of demand, local game stores shouldn’t over price the fat packs to meet market demand. “LGS stores that are doing that, right here (middle finger to camera)”. He states that local game stores are not charities and we are not obligated to spend extra money there just because it is a local game store.

I could go on about what MTGHeadQuarters is saying but I think the reply by Markus Wade in the comments section of the video (after clicking on the link, pause and scroll down past the video and you should see LINKED COMMENT expand that one to read Markus’ replies) does such a great job covering the counter points that I’m just going to briefly talk about what Markus said. Markus argues (and I agree) that Youtubers and others in the community just don’t understand how rare fat packs currently are – however, like Deriums says if they change this and release more fat packs, the price of the fat packs is going to lower overall considerably over time. However, if Wizards comes out with a statement indicating that they aren’t releasing fat packs for BFZ ever again, I would expect that the high demand for the land packs is going to keep the fat packs up in price at local game stores for the foreseeable future, since as Markus states mostly casual players support local game stores and they aren’t going out of their way to find the best deal on fat packs – they’ll see what they want in the store, and just go ahead and buy it.

So, what conclusions can we draw from this anecdotal evidence on Reddit and Youtube? Well, clearly there are plenty of stores upcharging on the MSRP price of the fat pack, but at the same time those stores give pretty good reasons for charging the higher price. Ultimately, I’m on the side of TCC on this one but will add my own two cents. Right now, it is best to buy the fat pack from Target or Walmart because it is the easiest way to get one without paying an arm and a leg. However, let’s not call the game stores greedy, or say that they price gouging customers. There is real demand for this product, which we saw coming but never thought about the fact that we were only getting one wave of fat packs. Those of us that read websites like MTGPrice are clearly looking for the best price of both singles and sealed product, and laugh at people paying $60 for BFZ fat packs. Yet like Markus indicates in the comments of the MTGHeadQuarters rant, casual players are happy to buy the fat packs from local game stores because that is the easiest way for them to get their product. It also additionally supports the local game store for those that want to “give charity” for all of those unsold Fate Reforged fat packs and razor thin margins the stores make on booster boxes.

Even I didn’t realize fat packs were similar to products like From the Vault and Modern Masters (I’m referring to the first Modern Masters here), where only one wave is released and the market dictates the price. I expect Wizards will be releasing a statement on BFZ fat packs in the near future since many players want a pack of the full art lands, so I’ll be following the fat pack craze pretty closely. My prediction is that they are going to release another wave of these things based on demand, just like they did with Mind Seize in Commander 2013. If you want to support the local game store, go for it – nobody is stopping you. Just realize that the MSRP for the fat pack is $40 and you shouldn’t be paying much more than that for full art lands since the price of those lands is going to come down drastically over the next several months as players open what is probably going to be the most Magic product in the history of the game so far. Thanks Expeditions!

I’ll end with saying that history indicates fat packs are great speculation targets at MSRP. Fat packs are great money makers in the long term, with more proven ROI than booster boxes. This will be true for BFZ as well, even if another print run is released due to the full art lands. I’ll be looking to pick up a few extra of these but certainly not at LGS marked up prices. Keep a lookout for another run of the fat packs in the future, and in the meantime check out your Targets and Walmarts to see if you can get one or two extra to stock away for future profits if your LGS is currently overcharging for fat packs.

What does everyone think about the current fat pack craze? As usual, let me know in the comments and thanks for reading.

41 thoughts on “Battle for Fat Packs”