I began my Sunday morning the same way I always embrace the day – well, at least from an MTG finance standpoint. I suppose technically Monday is fairly unique in absolute, as I have the day off and I need to come up with an article topic.

This week I figured there’d be some interesting movers and shakers from the SCG Indianapolis Open worth diving into. It’s a brand new Standard format, and cards are bound to break out right? Surely there will be some key speculation targets based on Saturday’s results?

Honestly, I’m not so sure. While I’ll be first to admit I watched virtually zero coverage of the event yesterday (it was my wedding anniversary and so MTG time was understandably scarce) I did manage to catch up with what happened fairly quickly. And with this limited information, I don’t see anything to get very excited about. That, combined with the fact that Battle for Zendikar cards still remain one of the worst investments for anything behind a 2 week time horizon, and I am faced with some fairly limited options.

Allow me to explain a bit further, and then hopefully provide some constructive ideas that are worth considering.

Expecting to read up on the hottest strategies of the weekend, I started off at Star City’s website to read Saturday’s recap. Unfortunately, the site didn’t have much to offer in terms of what strategies were most successful.

“Day 1 of the #SCGINDY Standard Open is in the books and one thing is clear: you can play anything you want in Battle for Zendikar Standard!”

No leads here – and in fact, the more diverse the format is going to be, the less likely certain cards will be able to stand out. Take Saturday’s top winner (according to mtgstocks.com/interests) for example: Atarka’s Command.

The green/red instant is pretty much sold out across the internet thanks to a strong showing on camera during day one of the open. I can certainly get behind this card’s strength and utility in new Standard. But $17 guys? For a multi-colored rare? How often do we have a multi-colored rare sustain a $17 price tag in Standard? Not many come to mind from the past couple years, and I don’t think this card necessarily merits the price either.

I can’t get behind the magnitude of this move, and I can only advise to sell immediately into this spike. I checked top vendors and none have moved their buy prices just yet – I suspect a small bump, but not a 2x increase. In other words, I don’t think vendors going to chase this card this high and I recommend you don’t either. I missed this train and I’m not going to try and chase it down. Let’s move to the next one.

Things only become more perplexing when I look at the next top Standard “interest” on mtgstocks.com.

A $64 Planeswalker in Standard is not brand new, but it sure is rare. I believe Liliana of the Veil notched that honor only briefly while in Standard, and of course everyone knows the story of Jace, the Mind Sculptor.

So is Vryn’s Prodigy the next Jace 2.0? It certainly has some commonalities to the iconic Planeswalker. Most obviously, it’s Jace. It’s Jace that costs two mana, can flip easily, starts with five loyalty, can protect itself, can give you card advantage, and can help you win the game rapidly with his ultimate ability. Additionally, Vryn’s Prodigy was printed in what probably amounted to an under-appreciated and under-opened set. Fewer copies of this mythic exist than mythics from, say Dragons of Tarkir or possibly even Fate Reforged.

Net, the story matches up fairly well and naysayers (including myself up until recently) need to respect this card. Does that mean we go after copies in the $60 price range? Honestly, this is a difficult call. If he does have the appeal of Jace 2.0, we know his price ceiling is in the $100 range. But even if the card does retail for $100, you’re looking at selling copies for $90 on TCG Player, netting you closer to $80 after fees and shipping. Risking $60+ to make $80 at most is not the most attractive risk/reward equation. And if Vryn’s Prodigy comes short of my ceiling and stops around $75, you’ll be lucky to profit on copies you buy today. I’m going to sit on the sidelines for now – I may regret this decision later, but I would rather put my speculation funds to work in an asset with better risk/reward prospects. But as events unfold, it would appear the time to buy copies for use in Standard may be “right now”.

Beyond these top movers, I hear Hangarback Walker is still relevant, various Dragonlords saw play, and we haven’t seen the last of Siege Rhinos or Mantis Riders. All of these creatures are thus far still relevant in Standard post-rotation, and therefore they all remain attractive cards to keep an eye on. I would prefer cards from Origins or Dragons of Tarkir since they were opened up less and don’t have Fetch Lands to compete with for value. That being said Hangarback Walker has likely already peaked, while Mantis Rider remains attractive at a buck and change. Though the Dragonlords may be the most exciting targets – they’re mythic rares from Dragons of Tarkir selling at reasonable prices. If they have a large impact in new Standard, they are well-positioned to double in value.

If the Standard format truly is slowing down as many expect with Battle for Zendikar, then these are bound to see increased play.

What About Battle for Zendikar Movers?

Nope. Don’t do it. People chasing Bring to Light last weekend are not going to make much on the card unless it makes a huge splash at the Pro Tour – and even then, they have to sell the card immediately. Don’t get me wrong, the card is powerful and cool. I really hope it does well in Standard. But it’s already up over $6, and as a rare in Battle for Zendikar I just can’t see this card maintaining this price tag. Again I look to Siege Rhino for comparison – if Siege Rhino can only be worth $3 there’s no way Bring to Light is a $6 card in one month unless it is the go-to strategy for Standard. Can money be made on the card in the short term? Perhaps, if it breaks out at the Pro Tour and you sell right away. But understand that this has to be your strategy if you hope to profit on Bring to Light. 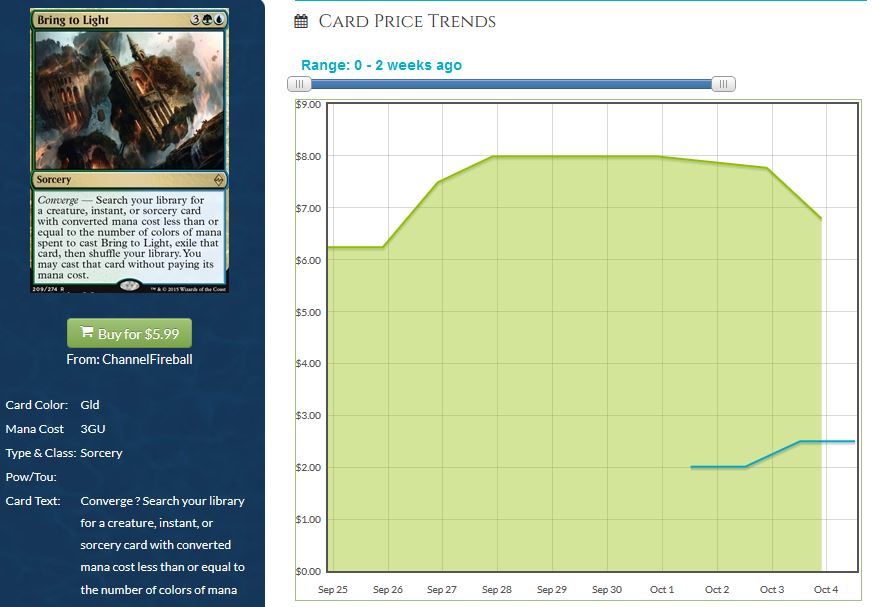 It’s encouraging to see Oblivion Sower stabilize in price after making waves last weekend, but being in the Duel Deck sure puts a damper on the card’s value. Radiant Flames also saw play and an ensuing bounce, though I’m not sure what upside remains. Often these type of cards sell for in the $3-$5 price range, and applying the Expedition tax yields a target price in line with where the card is currently trading.

In short, I couldn’t get particularly excited about any Battle for Zendikar cards heading into this weekend and that hasn’t changed. It’s refreshing to see the newest set on camera, but there’s just so much risk from excess supply going forward. If you hope to profit on cards from the latest set, make sure you have an exit strategy related to any possible Pro Tour hype spike. That will be your best bet.

We’ve been here many times before – certain cards make a splash during the first Star City Games open a new set is Standard legal. Certain cards appear to be the break-outs, only to remain absent in all subsequent events. Being such a young format, we cannot place all of our bets based on this weekend’s results. They’re better than nothing, perhaps, and we can glean certain ideas from them. But the Pro Tour is where the real movement takes place.

With this in mind, I’m going to keep most of my funds on the sideline. For one, I’m not a huge Standard speculator as it is. But more significantly, I didn’t see enough compelling data on Saturday to indicate that a given strategy is definitely here for the long haul. Rotation brings major change, and large format diversity only tells me things haven’t settled in place yet.

If I had to place bets, I would consider Dragonlords as prime targets. They are mythic rares from a less opened set with real potential in a slower format. If you want to make money on Battle for Zendikar, these next two weeks will be your window to do so. But such an endeavor comes with sizable risk, as you need to place correct bets on which cards break out at the Pro Tour. I may dabble here and there, but most likely I’ll watch this rodeo from the sidelines – it doesn’t fit my risk/reward equation well enough.

I wish everyone the best of luck as they place their bets these next couple weeks. I’ll be sure to weigh in on various ideas in the forums where I can, but understand that I remain largely risk-averse when it comes to Standard. I still maintain there are much safer plays out there with comparable upside, albeit over a longer time period. Modern Masters 2015 cards, for example, continue to reach all-time lows – eventually these will be attractive pick-ups, and moving hot Standard cards into staples like Cryptic Command or Mox Opal could be a very sound strategy.

Also don’t forget to pick up the Theros block cards you’re after these next couple months as they tank on their rotation (interestingly, Keranos, God of Storms has already bounced off its lows from a couple months ago). 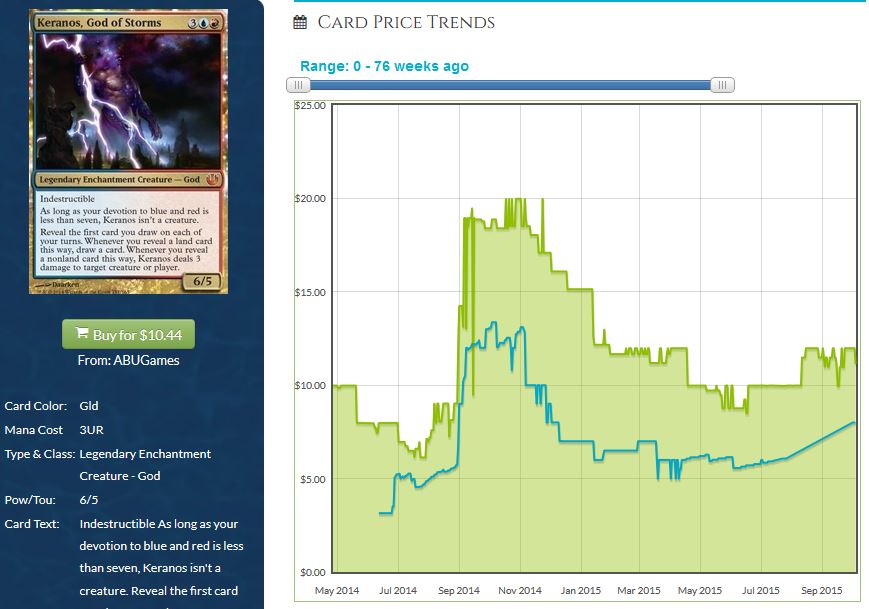 With Standard on the forefront of everyone’s minds, just don’t lose sight of other worthy pickups. Some of the most ignored cards now could become some of the most desirable six months from now. I’d rather remain ahead of the curve, and if I couldn’t do so with something like Jace, Vryn’s Prodigy then I will remain forward-looking and identify the next opportunity. It may be some Pro Tour breakout in the near term, but always think one step ahead and you’ll always have ample opportunities for profit.

13 thoughts on “PROTRADER: A Cautious Reaction to SCG Indy”