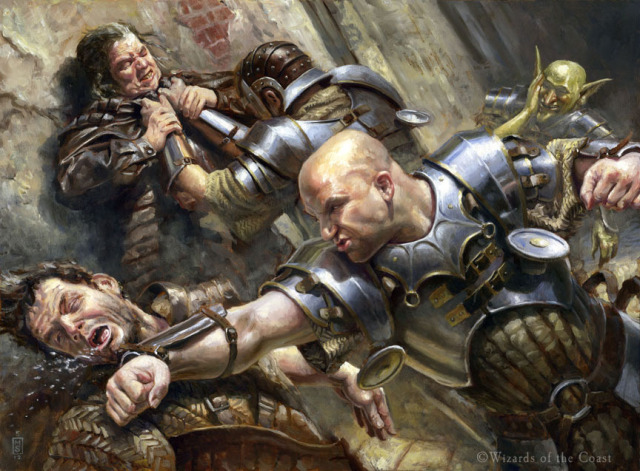 So has anyone found interesting lots on Facebook as a result of last week’s article? I’m curious to see if anyone found some nice decks, piles of staples, or anything else at a significant discount while using the methods I described.  That article was a sort of flashback/addition to one from almost six months ago, so I figured I might as well repeat the trend. Does anyone else remember this personal anecdote that I wrote up back in June? I wanted to explain my evolution from “random high school student and FNM grinder” to “that one guy who buys all of your Magic cards and has most of what you need for your deck.” I felt that it was successful in doing so for the most part, but it lacked in a pretty significant area that I’m surprised nobody called me out on.

Starting from (Almost) Nothing

I never really actually explained anything in detail with hard numbers about how much cash flow I started out with, how I used that initial cash flow to get cards, and the methods that I used to recycle that money into more cards and money, then into more money and cards, and slowly build a house of some sort. Almost like a house o—oh, forget it. I actually got the idea to write this article thanks to @LengthyXemit on Twitter, who just recently  put out a floor report of GP Madison for us. The afterthought at the end is actually what sparked this for me: what would you do with $100 if it was all you had to start your MTG finance portfolio?

“Collection at buylist” – Ogre
“Original Zendikar Lands at a quarter or less” – Ryan Bushard
“Bulk Rares at 10 cents as long as I had an out”- CoolStuffInc Buyer
“Bulk C/U at 3 per K” – Floor Grinder.
“A collection from a local player” – This editor

“Most of the above.” –Douglas Johnson

Personally, I’d try and diversity my investment a little bit, but my answer incorporates most of the above responses. I’d want some bulk commons and uncommons at $3 per thousand, a good chunk of bulk rares at a dime a piece, and a couple of small starting local or Facebook lots at approximately  buylist prices. I disagree with Ryan on the Zendikar lands, but that’s a discussion for another day.

Now let’s hop back in that time machine to when I was an FNM grinder in high school. I was lucky and had literally zero bills to pay, so any income from my unpleasant job at Kmart went straight into my only hobby.

Let’s say for argument’s sake that I only had $100 to spend on cards back then, and was starting from absolutely nothing.  We have to try and grind this $100 into $200, while keeping both cards and cash liquid at all times. Nothing loses a returning customer faster than the phrase, “Sorry, I don’t have cash at the moment. I can’t buy that.”

If we start at $100 cash, then we want to stick to getting as much bang for our buck as we can. We might not want to jump in the big pond by buying Force of Will from a local higher-end player for a buylist of $70 (even if he needs the money)—that runs the risk of the same guy coming back with another Force or equally high-end card while we have almost all of our initial hundred tied up in a single card. While there’s a chance that  we could flip the Force for $90 on TCGplayer (or more likely, Facebook) for instant return, I think it’s much more wide to go wide instead of tall with our initial investment.

If I’m a young teenager with a hundred dollars in a pool full of larger fish with big pockets, I want to attack a smaller market that they’re not bothering with. Don’t be the guy chasing after everyone else’s Expeditions lands. There are tons of competitive players with thousands of commons and uncommons sitting in their basements from sets and blocks in the past. Does your LGS even buy bulk rares? What about bulk commons and uncommons? These are common blind spots of some tournament grinders, because they just don’t want to take the time and effort involved in picking, piecing, and sorting out their cards. There’s a physical space constraint on bulk, as well, and some significant others don’t take kindly to their living rooms being full of white boxes of cardboard.

This makes bulk one of your more attractive options when starting from a low cash level. Instead of sitting on your hands for four months waiting for your Mantis Riders to jump from $.50 to $3, you could be processing thousands of cards over and over again.

Another reason why we’re sticking with bulk is that there’s really no risk of it ever going down in price. Unlike buying singles, a thousand bulk commons and uncommons literally cannot go down in price. The invisible non-competitive players out there outnumber us financiers and grinders on a scale that’s probably somewhere around 10:1. Those players just want a bunch of cards to jam decks with, and you can be the one to help them do that.

How much bulk can you get for $100? Well most larger vendors at Grands Prix only pay $3 per thousand, so you’re going to want to beat that to at least be an attractive option. I personally pay $4 per thousand as long as it’s a mix of commons and uncommons, mostly English, and near mint. I know, I’m a stickler for details. If you have an out ready and waiting, you can pay $5 per thousand, like Xemit, in order to aggressively accumulate as much bulk as possible. At that point, though, people will start bringing you more bulk than you can handle. Remember that we’re on a budget here and only want as much as we can handle without having infinite number of people try to overload us. Let’s stick to $4 per thousand.

So that’s 25,000 cards, assuming we do decide to burn all of our allowance on non-rare bulk. What do we do with that many cards? Well, first, we pick them. I’m not going to go over how to pick because that’s another five articles by itself, and a lot of picking ability just comes down to first-hand experience. I will go over one of my favorite ways to get rid of bulk though, and that’s the ever so useful Craigslist. 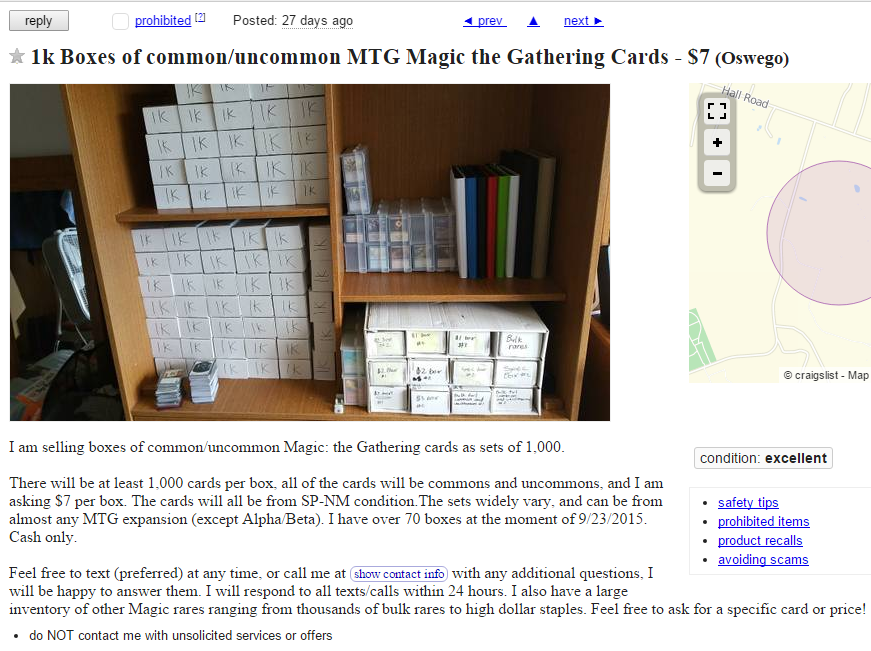 The above picture is my personal listing, which reminds me that I need to update it because it’s about to expire. My rules are very clear, and my customers knows exactly (well not exactly, because it’s 1000 randomized cards, but you get the point) what they’re getting. I realize now that I’m writing this that if you want to mirror my strategy exactly, then you need to invest a bit more in additional 1000-count boxes, but you don’t really have to use the white BCW boxes. You can use old Fat Pack boxes (they hold around 600 cards each), empty cardboard booster boxes, or even make your own out of scrap cardboard.

Did you notice that my binders, pick boxes, and that 12K-count card house are in the picture? That’s not on accident. Non-competitive players who buy your bulk commons and uncommons want to make their decks better, and you can use your own personal collection to sell cards out of to help them with that goal. This is why I believe combining bulk rares with your C/U is ultimately the best starting point, because you give your customers so much more cards per booster pack than they would have experienced at Wal-mart, and they even get to customize their decks before dropping the cash.

Alright, so let’s say that instead of buying just 25K in bulk, we only found 15K and spent $60. We also picked up a hundred or so bulk rares from BFZ and Khans block and spent $10, leaving us $30 or so for random cheap singles that we might happen to come across. We throw up a Craigslist ad and get a hit, someone looking to return to the game with three other friends without breaking the bank. If we sell them 10K of the bulk and 30 of the rares, we get $76 assuming we sell bulk rares at five for a dollar, like I do. Now we have $106, 15k left, and 70 or so rares, and that’s assuming we picked the bulk clean and found literally nothing. Simple math aside, you can see where we start to ride the value train and grow a collection. If we rinse and repeat this process several times, we can start grabbing singles that are worth selling on eBay, Facebook, and TCGplayer.

While we’re on the topic of bulk rares, sometimes you end up getting lucky once a rotation happens when you re-dig through your boxes of cards you once paid a dime for several months ago. I managed to find seven copies of Hidden Dragonslayer in my white bulk rare box, and that’s a multiplier you’d be hard-pressed to find anywhere else. The same thing happened with Crackling Doom and Mantis Rider, so be on the lookout for potentially playable bulk rares from BFZ that could do the same. I certainly don’t hate buying Blight Herder or Felidar Sovereign for dimes if you can find competitive players looking to pawn off the remnants of their non-Gideon lottery tickets to support trading for your fetch lands.