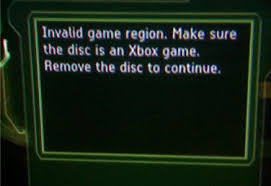 So how about that Steam sale, huh? I’m actually just an extreme casual when it comes to games that aren’t Magic, Fire Emblem, League of Legends, or Pokémon, and this is the first time I’ve actually been bothered to download a game on Steam. I’m a fan of tactics and turn-based strategy at heart, so my friend convinced me to download XCOM: Enemy Unknown for $7.50 to relive some of my favorite single-player gaming over the past few years.

If you’ve been around the videogaming world for at least a little while (99 percent of you reading this, probably), then you’ve heard of the term “region locking” before. For those of you who keep to the card and board games, imagine you couldn’t use any of your Japanese foils in your Legacy deck. No Italian Legends cards, and no French copies of Delay.  Bear with me; I know I write an article about Magic finance and not videogaming, but I’m going somewhere with this. 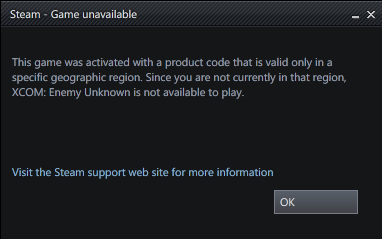 (Thankfully, this is just a random screenshot I found. My XCOM was downloaded with no problems.)

While we don’t have this specific problem as Magic players, it would certainly be frustrating to be restricted from content that you bought, traded for, or were gifted due to a  company’s desire to prevent imports or force certain purchasing channels. In fact, you might feel similarly to someone who owns some Legacy staples, yet lives in an area where it’s nearly impossible to get rid of them at full value, when you were told something like, “Legacy cards will always get you a premium if you’re trying to trade into Standard or Modern.”

Recently, my fellow MTGPrice writers Jim Casale, Jeremy Aaranson, Travis Allen, and I (and soon to include our friend Sigmund Ausfresser) started up a video podcast on a whim. One of the topics that we touched on this past week was how much our experiences differ depending on where you’re located in the U.S. (or outside it entirely).

While I’ve always advocated “buy cards from other players at buylist values when they need to sell,” that logic is not always feasible for people like Jim, who is “region locked” in his MTG finance efforts (see? I made the segue work) by living within driving distance of Cool Stuff, Inc. When the players near Jim need to sell cards, they’re flanked by multiple LGSs that are ready to compete with each other and pay competitive buylist prices. If I had to relocate down to the land of terrible one-liners and Florida Man, there’s no question that my number of collections bought and singles sold would drastically decrease.

Since I live in upstate New York and five hours away from NYC, the area is devoid of any  large-scale LGS like ChannelFireball or SCG. The closest huge competitive buylist I have to compete with is either down in NYC, or Face to Face Games in Canada (the downside of this is that we get maybe one SCG Open every three years, but hey, give and take). Players could also drive 45 minutes to Syracuse and sell cards to one of the several card stores in the city, but the number of cards they’re willing to buy and amount of cash offered are both on the short side.

I mentioned earlier that you might be in a situation where you have Legacy staples, but are unable to trade them. Jim picked up two dual lands a couple of years ago, supposedly the “impossible to lose” investment in Magic. Unfortunately, crocodiles don’t play Legacy, so Jim ended up selling the duals to a store instead of being able to trade or sell them to a  player for a premium toward Standard or Modern staples. That’s a story that initially confused someone like me, who has almost never left the northeastern part of the United States: “Inability to trade Legacy staples? That’s just unheard of! We have one of the more vibrant Legacy player bases in the U.S!”

Before you trade those shock lands for that Lion’s Eye Diamond just because it’s on the Reserved List, know the routes for moving the LED if the Legacy scene around you is nonexistent.

This doesn’t hold true for just Legacy, though. Let’s say this new MTG financier Jason is trying to make a bit of extra cash while having fun speculating and trading. He doesn’t have a store on TCGplayer or eBay, he just buys and sells locally, trying to trade up and sustain his hobby. Almost everyone at his LGS is a Standard or Commander player, because there’s a very limited number of people who can afford a Modern deck in his area. FNM is always Standard or Draft, and there are a couple of Commander pods that meet up twice a week.

Jason is trying to get into MTG finance a bit more heavily. He follows people on Twitter, listens to podcasts, and reads articles. He sees a lot of people agreeing that Modern Masters 2015 staples are a pretty smart pickup right now (hint-hint: they are). Jason starts targeting the scattered Modern pieces out of his friends’ binders, trading away the dirt cheap Battle for Zendikar rares and mythics. He picks up a couple of Cryptic Commands at $25 in trade, Spellskite at $23, and Remand at $5.

If we jump inside our time machine and skip a few months into the future, Jason’s trades have theoretically paid off. His Cryptics are $35, Spellskites are $30, and Remands are $8. But (you probably see where I’m going with this) who is he going to trade or sell them to? If his entire playgroup focuses on Standard and Limited, Jason has to either start using eBay, TCGplayer, or PucaTrade, or convince everyone to play Modern after all of the cards they need are more expensive. Granted, a lot of you reading this probably think, “Well, Puca/TCG/eBay is simple and effective,” and I would agree with you. However, not everyone is looking to constantly send cards through the mail, and there are still players who don’t trust PucaTrade due to bad personal experiences from trades in the past.

I sort of went in a different direction than I was planning when I laid out this whole “region locking” theme for the article, but I’m hoping that I still managed to explain my point. The tips that are given out every week in the constant stream of MTG finance news are not universal, and should be adapted depending on what your playgroup and LGS focus on. Legacy still has a bastion of players in the Northeast of the United States, but it’s a waste trying to trade a Wasteland where Jim lives. If you drive a few hours to buy a solid collection of EDH staples when your LGS is firmly steadfast in 60-card territory, it might be time to adapt and learn how to use internet outlets like Puca, TCGplayer, or eBay instead of letting the stuff rot in your binder. Even if you personally are “region locked” from collection buying because you have to compete with several other stores or local names, there are multiple different strategies to either compete or coexist with them.