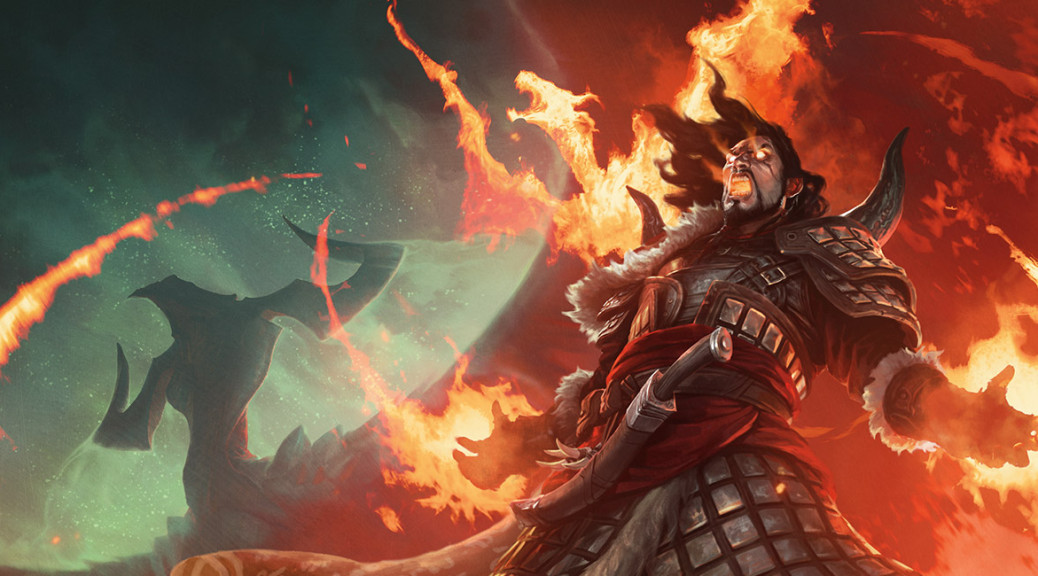 With everyone looking their eyes full of the new set (with glee, I’m doing the same) I want to think about the things that are about to rotate when Shadows over Innistrad arrives in April.

Khans of Tarkir and Fate Reforged are going to be gone in three months, so it’s time to get out of some things and prepare to get into others.

Fetchlands ($14-$22): These have already seen a spike thanks to the battle lands and it’s possible that they won’t go down at all. Modern has already soaked up a lot of the supply, and casual players got great lands at a good price.

I’m getting rid of mine now, and after rotation, I do not expect them to go up or down significantly. I am going to pursue a strategy of seeking them out in trade, though, because turning several smaller cards into a fetch land will give me good trade fodder.

Sorin, Solemn Visitor (currently $8): I would expect him to take a minor dip in price but not very far. Get rid of extras now, but keep the ones you’ve already put into Cubes and EDH decks.

Everything else in Khans is quite low in price, as befits a set that is about to rotate. So let’s see where the deals are:

See the Unwritten ($1): Guo wrote an article a while back that detailed a philosophy about cards that can only get better. With every big creature printed in the future, See the Unwritten gets better. It’s not going to be huge, but the foil multiplier indicates that this has had big casual demand. I love picking this up at $1 and just being patient. It’s certainly not going to go lower.

Clever Impersonator ($2.25): Another card that has a 4x foil multiplier, instead of 2-3x, I like having a few of these to spare. It’s just amazing in any casual format, copying anything at all. The better your opponents are, the better this will be. I would expect slow but steady growth from this card.

Foil Feed the Clan ($5): I mentioned this card as a sideboard option, and the 10x multiplier on the foil says that this is worth having. Ten life is worth three to four cards against a Burn deck and while it’s almost exclusively a Modern sideboard option right now, It might get a huge bump in price if it shows up in a Legacy event.

Empty the Pits ($0.75): There is such low risk in picking this card up. Yes, it’s more expensive than Secure the Wastes, and they are tapped, but the tribal appeal cannot be overstated. Get a few, sock them away, and move on. It’s also worth noting that there are only two Delve spells with X in the cost, though this one cannot be used in a combo turn. The other is a counterspell, so not really relevant.

Foil Become Immense ($6.50): It’s a mainstay now in Infect decks, though not quite good enough for Legacy builds that get to abuse Invigorate. Nowhere to go but up, and the Temur Battle Rage combo might get popular again.

Foil Stubborn Denial ($4): I’m very surprised that this hasn’t seen more play in Modern and Legacy yet. When I can Tasigur on turn two and have this up (off fetches and Thought Scours) the world would seem to be my oyster.

Ugin, the Spirit Dragon ($48): This is a very high price, but he’s the chase mythic of a small set. Thankfully, there’s a promo version out there taking some of the pressure off the high end, giving Commander and Cube players a special card to go after. I think that his price goes down some but not a lot, and certainly not enough to make it worth the play of ‘sell now, buy again in three months’. Ugin sees a fair amount of Modern play, so I won’t be surprised when he dips down to $35-$40 and then climbs back upwards.

Tasigur, The Golden Fang ($4/$37): One mana for a 4/5 on turn two after a Delver turn one (presuming fetches and Thought Scour) is really good, even before the ability puts your worst spell back in hand. I know several of my cohorts here have trumpeted the foil as well, and the multiplier of nearly 10x is a very strong indicator of demand post-Standard.

Monastery Mentor ($16): A first-class finisher, one that demands a sweeper or an immediate answer. Given the relatively small number in circulation, I would imagine this goes down to maybe $12 at rotation before starting to creep upwards.

Temporal Trespass ($1.75): Extra-turns cards are always going to have a certain group that they appeal to. The foil has a normal ultiplier up to $5.50, so this is a stable price to get in at. The $1.75 price is despite seeing no play anywhere, so it’s unlikely to go down.

Whisperwood Elemental ($1.25/$7): Foil alert! I can tell you that this card is a house in Commander games, where you can flip up whatever you manifested each turn and just stockpile cards in hand, all while having a free insurance policy against having your board wiped. Six times the regular price means that it is being picked up by those who like shiny things, and I think the foil could be $15 in a year.

Foil Gurmag Angler ($10!!): Yup, the Delve decks love this guy and some of them play this and Tasigur. I’ll leave it to the brewers to decide who is right, because the price of self-mill to make this good is a price that was already being paid. I’d also like to point out its cousin Hooting Mandrills at $3.50 for a foil, though being a 4/4 is not quite big enough.

8 thoughts on “Khans and Fate Rotations”