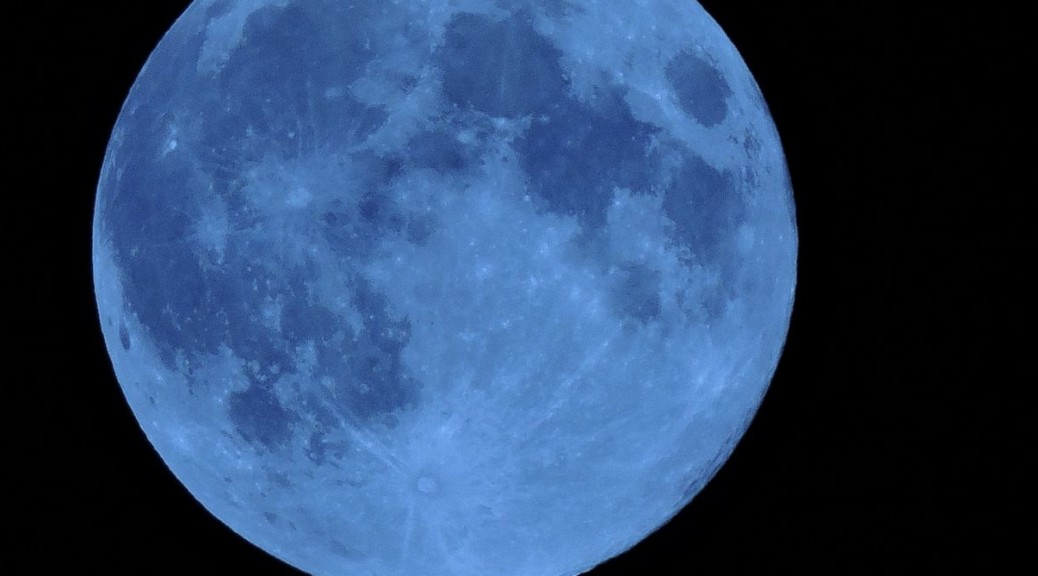 After 8 surprising rounds on Friday, including three rounds of draft and five rounds of Modern, a metagame mix of established decks and exciting new archetypes has emerged to dazzle and amaze. Affinity (13%), Burn (13%) and Infect (13%), archetypes expected to show up here in force, have in fact landed in quantity. 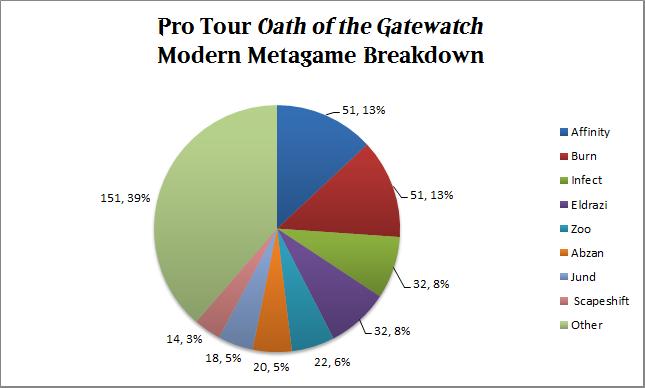 So far however, the top table hype has largely been dominated by the presence of several surprising builds of Eldrazi Aggro strategies (as I correctly predicted before the tournament) that have set aside the BW control builds from earlier this season in favor of highly aggressive builds including cards such as Endless One, Eldrazi Mimic and Matter Reshaper.

At the end of Day 1, only two players stood alone at 8-0, having 3-0’d their drafts and boasting a perfect 5-0 record in Modern.  New Zealand native Jason Chung drove home the power of Blood Moon, in his updated version of Blue Moon, a UR control deck running many of the cards from the now defunct Splinter Twin archetype along with main deck Blood Moons aimed at shutting down the many decks trying to get too fancy with their land base. Standing shoulder to shoulder with Chung is US based player Jiachen Tao and his insanely innovative UR Eldrazi Aggro build. While running the expected core of Reality Smasher and Thought-Knot Seer, Tao also ran multiple copies of Eldrazi Skyspawner, Drowner of Hope and Vile Aggregate to go wide and hit hard as the situation demanded. The coverage team seemed stunned as the “draft deck” continued to mow down one opponent after the other and many of the deck brewers among us will be hard pressed to not root for Tao to continue his streak as the day progresses.

The financial stories of the weekend thus far mostly revolve around the stampede to buy out cards from the various Eldrazi decks that have floated consistently to the top tables.

All of the following cards have enjoyed significant spikes in the last two days.

A common theme here is undervalued Eldrazi rares from the BFZ block, many of which most people overlooked as being Modern playable. Chalice of the Void, a major player in the Delver/Treasure Cruise era of 2014, now finds itself back on centre stage as a key piece of tech in the Channel Fireball version of the Eldrazi Aggro deck, often using Simian Spirit Guide to lock opponents out of the game with early Chalice or faster Eldrazi beats.

Often in need of reliable lands that produce colorless and colored mana, the ascendant Eldrazi are also pushing prices on older pain lands up on the basis that they are suddenly Modern playable dual lands.

Death’s Shadow aggro was the deck of choice for several key European players, but the total number of pilots is relatively low and selling into the hype now is the safest move if you are holding copies and looking for a good exit point.

Wow, that’s a lot of massive spikes to come out of a single Modern tournament! Clearly, the Splinter Twin/Summer Bloom bans are having the desired impact.

I suspect that it will take several more tournaments before the ideal Eldrazi build becomes clear, but the power level of the archetype, largely derived from Eye of Ugin, is now undeniable in Modern. Non-foil versions of the cards du jour like Endless One, Mimic and Death’s Shadow are likely fine to sell into this hype train, though a solid Top 8 appearance for these cards could potentially yield further gains, especially on foils.

Follow along with us as we stalk the final 5 rounds of Modern play before the cut to Top 8.

In Game, Yuyaa’s combo plan goes off as planned, and we’re off to Game 3. Game 3 sees LSV cast a pair of Thought-Knot Seers to empty Watanabe’s hand of relevant combo pieces, and LSV moves to 10-2 with the CFB Eldrazi aggro build centered around Chalice of the Void, Simian Spirit Guide and Eldrazi Mimic.

These guys are both at 8-3 heading into this round and took a game a piece off camera. In Game 3, Owen manages to slip in for a huge eight poison damage and puts exits the round at 9-3. Infect looking like a reasonable contender for a Top 8 slot, while Karsten is likely out of contention.

The Europeans split the first two games as well, with both players at 8-3 so far. In Game 3 Muller manages to land a Stony Silence (a card that enjoyed a recent spike) and limits the action from the Affinity deck, but Dickmann manages to put it away regardless with some aerial attacks. Mulle falls to 8-4 and Dickmann takes an Affinity deck to 9-3.

At the end of this round the tournament is led by Frank LePore, running his own version of Eldrazi at 11-1.

Flock enters this round at 10-2, while Jensen is at 9-3. Floch quickly takes Game 1, and Jensen gets another bad hand Game 2 to lose the match. Flock goes to 11-2 and seems likely to put an Eldrazi deck in the Top 8.

Frank leads the pack at 11-1. His Eldrazi build runs Wasteland Strangler, Matter Reshaper and World Breaker as per some earlier builds. Brown is on the UR Eldrazi build. In Game 1 Eldrazi Obligator grabs Worldbreaker and swings for the win, as I quickly nab 10 foil copies of Obligator and marvel at the insanity of this deck and how badly most of us are at evaluating Modern playable cards.Brown takes a quick second game as well, and puts the UR Eldrazi build in first place, with a strong chance of making Top 8.

Both of these players at 9-3. This could determine whether Death’s Shadow or Collected Company get some Top 8 camera time. Zatlkaj goes down to 9-4 and it seems likely that Abzan Company makes Top 8.

Fabrizio Anteri describing how they modified the core zoo creature base to accomodate Death’s Shadow and increase % of hands that provide Turn 3 kills. Death’s Shadow is run of a 4-of. Thoughtseize x3 main. Street Wraith x4 makes the jump from Living End to help reduce your life total fast enough. 3x Become Immense, 4x Temur Battle Rage also in the deck and possibly highlight that these foils are under-priced at present since they keep showing up in various Modern aggro builds. Also running 4x Mishra’s Bauble. Lands are made up of a pile of shock and fetch lands to ensure low enough life totals to make use of Death’s Shadow.

LSV lives out my theoretical magical x-mas land as he drops double Mimic off of Eye on Turn 1, follows up with a Thought-Knot Seer, and destroys Frank on Turn 3. In Game 2 LSV keeps a threat light hand, and Lepore jumps out in front with Mimic, Reshaper and Thought Knot Seer to own the beat down and even things up. Both players playing for Top 8.

Game 3 is one of the best on camera of the entire tournament with LSV geting Frank down to 1 before a board stall kept tension for several turns, finally being broken by the combination of an Oblivion Sower and a Gut Shot off the to guarantee LSV his next Pro Tour Top 8!

Triple Eldrazi Skyspawner from Tao off two islands and a Shivan Reef, puts Pardee on the back foot early in the first game. An Obligator seals the game on the next turn.

Off camera Shuhei Nakumura goes to 12-2 on Eldrazi, putting another monster brew in the Top 8. Ivan Floch also goes to X-2 with Eldrazi, beating Infect. Half of the Top 8 likely to be Eldrazi.

Jiachen Tao (UR Eldrazi) vs. Kentaro Yamamoto (Through the Breach)

This UR Eldrazi deck went 19-1 in Day 1 between its various players. Yamamoto’s deck features Jace, Vryn’s Prodigy, which could be noteable if this deck makes Top 8 since Jace is seeking prominent homes in the format. Game 1 is won on the back of a newly played Ruination Guide, allowing Tao to get in for a pile of damage. In Game 2 a timely Stubborn Denial stops the first combo attempt from Yamamato, but a Faithless Looting leads to a Goryo’s Vengeance and into Emrakul to wipe the board and the Japanese players takes the game to force a tie breaker. In Game 3 a Thought-Knot Seer off the top takes out a critical Through the Breach and the UR Eldrazi deck goes to 12-3 and makes Top 8 for sure.

Off camera LSV loses to Patrick Dickmann, putting both at 12-3. Paul Cheon finds a Galvanic Blast off the top to put himself in Top 16 for a very solid finish.

Our Top 8 is so far set to include:

With that, the financial signals are clear. The Eldrazi cards are likely to hold their spike for a while, but upside on the more expensive ones and foils may be held back for feat of a banning on Eye of Ugin.  The UR Eldrazi decks still looks underrated financially, as many of the key foils have not moved much today.

Join us tomorrow for one of the best Top 8s of all time based on talent, and one of the least diverse in terms of archetype.