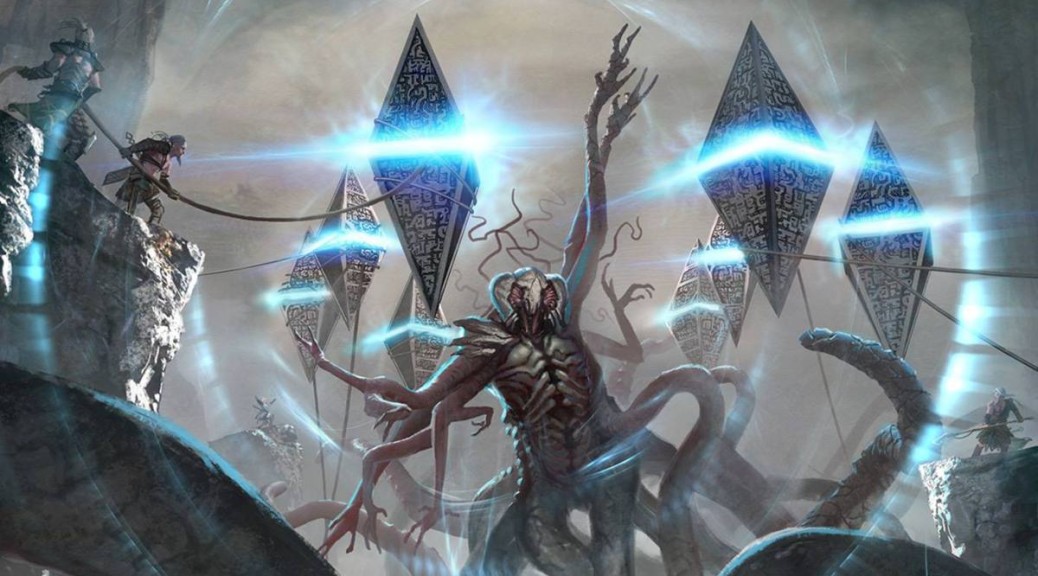 I do not spend much money on Magic. In fact, I actively try to invest at little hard cash as possible into this hobby.

My usual spending habit is to get in a draft for about $15, crack those packs, and get my single elimination on. Occasionally I buy individual cards, especially if they are EDH foils, but mostly I limit my spending.

I think of myself as a casual player, despite having written for MTGPrice for more than two years. There are a few cards that I’ve gone after hard and traded for many copies of (Thespian’s Stage, Prophet of Kruphix) because I believed, but I’ve never spent a lot of money.

I have never been a person who is heavy into speculation, but my collection’s value has gone crazy because I rarely dip into my old cards.

We are living in a very strange time for Magic. There’s more people playing this game than ever before, and the players appear to have more money to spend than ever. The structure of the game allows for people to play at the level they are comfortable with, be it in terms of finances, format, styles, anything.

My advice to you is now to never sell your bulk. Store everything. I’m not sure about the cards that are bulk from sets as recent as Theros (just as an example) but the spikes are coming so fast and so frequent that I would hate to move bulk unless I was moving to a much smaller home. Commons are probably okay to get rid of, but uncommons might have some legs, especially selected good uncommons.

Let me give you an example: Inquisition of Kozilek. 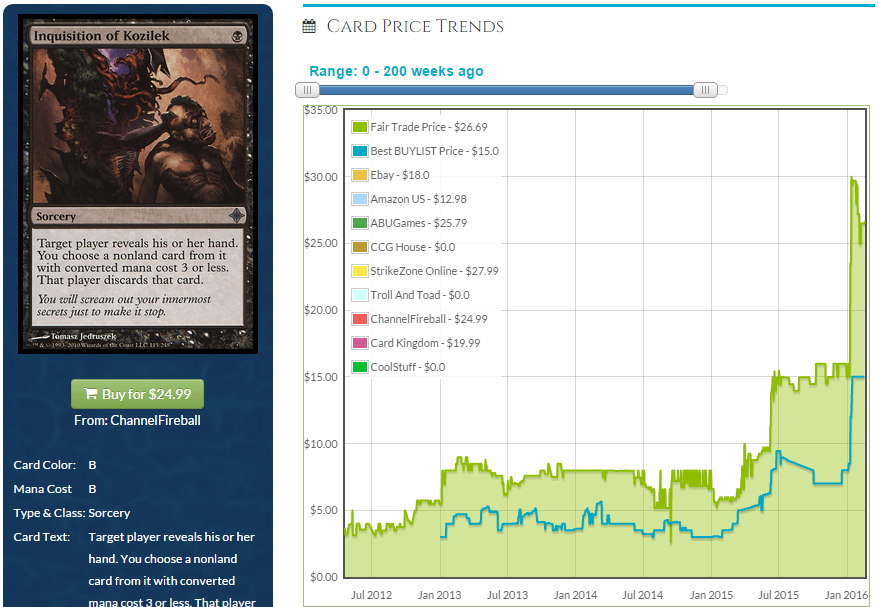 I sold 20 of these to a buylist for $5 apiece when they first went to $8, but that was simply because I didn’t know they had gone up to $4 months before. I went back to my Rise of the Eldrazi boxes and got them all out, cackling as I made $100 off of a card that I thought was a crap uncommon. It was crap, too: Inquisition was easily a last-pick card in ROE draft.

I don’t regret selling at that price, because I didn’t expect that three years later, it would be a $25 card. A card spikes and I want to move it out. I’ll have made a ridiculous profit already, and I have zero way of knowing if it’ll get reprinted or banned.

It started as a budget alternative to Thoughtseize but because there’s so many terrifyingly cheap cards in Modern and Legacy, though the reprint version is now cheaper. Thoughtseize also provides a strong example of what can happen if you hold a card indefinitely: If you had them in the summer of 2013, they were at $75, and who knew how high it could go…until it got reprinted in Theros and the value dropped.

I think there are cards in recent sets that are very cheap, which given the right circumstance, might really take off. For instance, Become Immense has proven to be a very potent card, especially with Temur Battle Rage. So far, no one has added Become Immense to Prophetic Flamespeaker, saving a card. Flamespeaker is about $1 now but it could go crazy as soon as one deck puts up results.

I want to look at a pair of recent spikes and think about if there’s room to grow. 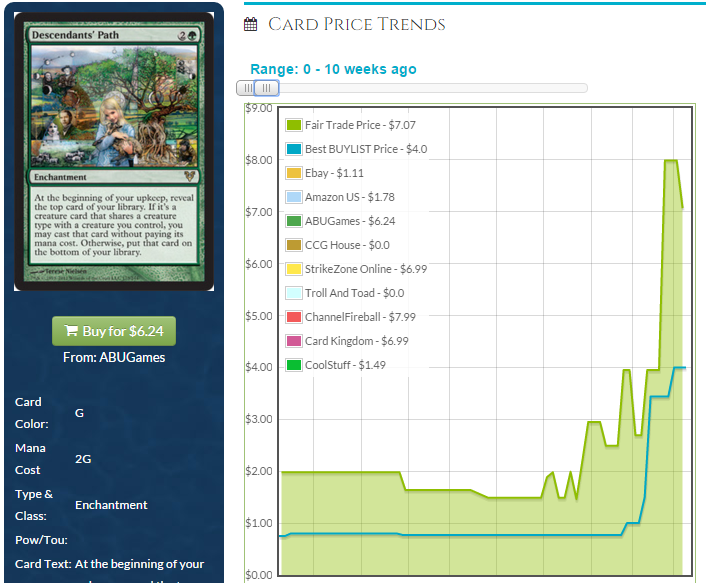 I’ve given up trying to predict what card people will latch onto in a fit of hope and speculation. Descendants’ Path is one example, where people decided that they could use Conduit of Ruin to set up for a free Emrakul, the Aeons Torn. This seems awesome, but it hasn’t translated to a deck yet, or at least one with measured success. The card itself hasn’t come down in price yet, and that’s the key for people that were playing and drafting way back in 2012: it was bulk, or just about that price as an EDH card good in tribal decks. Now it’s a $7 card and the time has come to get rid of all the ones you have. 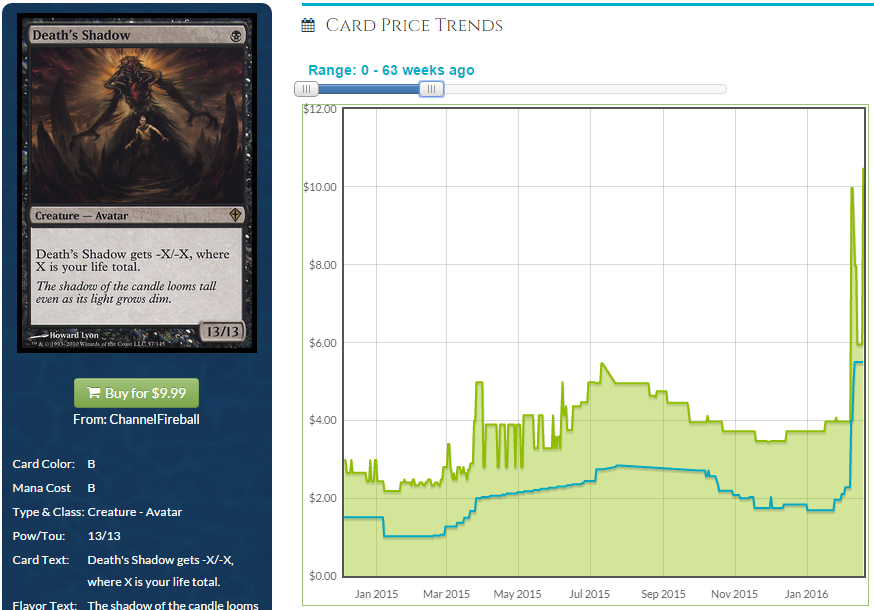 This is different. First of all, it’s from Worldwake, a set that was opened in ridiculously small numbers. Think about it: Zendikar is the most popular set ever at the time (2010!), and the draft format is ZEN-ZEN-WWK for three months before Rise of the Eldrazi came out. There’s not a lot of this card around, and there are decks doing very well with it. Until it’s reprinted, it’s got room to grow but if you have some of these I’d get rid of them now.

Finally, I want to point out that new formats offer unparalleled opportunities. Just in the last couple of years, we’ve seen Tiny Leaders take off (and crash, to some extent) as well as 93/94, also called Old School, and those cards have seen significant growth. Who knows what the next format will be?

Keep everything. Once it spikes, let it go, but until it does, store it all in a safe, dry, and cool place.