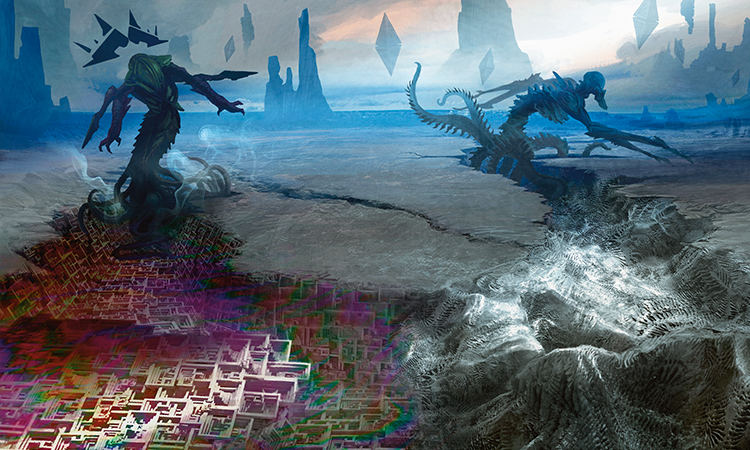 Yeah I don’t know if I agree with that idea.  Eldrazi are like a cold front that rolled in for a month or two and will probably roll out when Shadows over Innistrad comes out in April.  But in the mean time, you can play this sweet Standard format, right?

Standard hasn’t been a featured format on weekend coverage for 3 weeks so not much head way has been made in the largely Rally dominated format.  That being said, there are still plenty of things we can do to prepare for the next format.

Generally at the start of Standard formats (ie right after a new set has come out) decks will add new cards to an already existing archetype until someone comes along with a completely new look at the format.  We can take a look at some of the most popular standard decks right now and see which largely survive rotation as those will be ready to go out of the box.

If you play 4 Color Rally, Mardu Green, Jeskai Black, or any flavor of Abzan your deck will likely not survive in its current form.  Without the powerful 3 color cards and Khans of Tarkir fetch lands it’s hard to see any world where they could.  If you want to avoid the Eldrazi Winter in Modern I don’t suggest building these decks unless you already largely own the deck.  Personally, I decided to play Rally since I owned all of the cards for the deck except for Rally the Ancestors and Grim Haruspex.

Atarka Red is a deck that is losing a lot of its support for “go wide” strategies and its combo kill.  Monastery Swiftspear, Hordeling Outburst, Become Immense, Temur Battle Rage, Wild Slash, and their heavy fetch mana base are leaving.  While most of those cards are not particularly expensive the deck will need to find a way to replace those token makers or give it a lot of raw power to keep competing.  I won’t say the deck is dead but I wouldn’t invest a ton into it expecting it to be a player in the next Standard.

BR Dragons is a deck that while is only two colors has some pretty heavy color requirements.  Grasp of Darkness and the double red creatures are not very easy to cast with only 2 lands for fixing.  This deck is definitely going to be more alive than Atarka Red due to the raw power of it’s cards but it may be a misstep to play a deck without any of the manlands next Standard.

Bant Collected Company decks might seem like a weird deck to put here. Its heavy reliance on a fetch and battle land mana base to support it’s 3 colors makes me question how easy it will be to cast Deathmist Raptor along side Reflector Mage in April.  This deck might morph (no pun intended) into a deck closer to a G/X deck with a light splash.  I wouldn’t be surprised if it dropped most of the white spells in favor of being the only Jace and Collected Company deck.  With that in mind, I’m not super interested in buying into the Deathmist Raptor part of the deck.  If there are very strong graveyard decks it is likely that there will also be very strong graveyard removal cards (which we currently don’t have).  On the flip side, if we get more cards like Satyr Wayfinder again, it makes Deathmist Raptor a lot better.  I think you should go with your gut in this instance because I’m not sure which is right.

Standard in April will have 4 sets from the current Standard.  Two of them (Dragons of Tarkir and Magic Origins) will rotate out in September with the release of the unnamed next block.  The other two sets (Battle for Zendikar and Oath of the Gatewatch) will survive until the following April.  There is one deck that is reasonably good in Standard now that is largely made up of cards from the most recent block.

G/x Eldrazi ramp decks ill be good in some flavor.  Maybe they will be Red and play Chandra, Flamecaller and Kozilek’s Return.  Maybe they will be green and colorless using Wastes to power out Ruin in their Wake.  Either way the bulk of the core of the deck survives for some time.  The exception to this, being Nissa’s Pilgrimage and Explosive Vegetation which leave in September.  This deck is pretty heavy on Mythic rares which means it could become VERY expensive if it is a clear leader in the next Standard.  World Breaker is a very affordable $7 on TCG Player right now and will likely be a key part of anything Eldrazi.  If going a little bit bigger is more of your thing, Ulamog, the Ceaseless Hunger can be found for $19, Oblivion Sowers are under $5, and Kozilek, the Great Distortion is a surprisingly low $7.50.  Now that I think about it, I’m almost interested picking up Kozilek at $5 cash purely to hang onto for a few years.

As far as rares, it seems like the base of Sanctum of Ugin and Shrine of the Forsaken Gods will be good for 15 months.  I’m finding it hard to figure out a better way to spend $8 than to buy those two sets of lands.  The worst case scenario is you lose $8 but we can see from battle lands and manlands (like Shambling Vent) that Battle for Zendikar rare lands can support a higher price tag.

Oath of Nissa is another card that might be poised for a big up tick in play.  It’s legendary which means the 2nd one you play puts an enchantment into your graveyard.  This is relevant for the new Delirium cards.  The other thing it does is make it a lot easier to cast Planeswalkers.  Right now mana is really good so that doesn’t matter that much but when our mana gets much worse it may be relevant.  All 7 of the Standard legal planeswalkers from Dragons of Tarkir, Battle for Zendikar, and Oath of the Gatewatch have 2 colored mana symbols (with 3 of them being different colors).  While I won’t say you should buy out your local shop of Oath of Nissa, I would advise getting a personal playset before they get too expensive.

10 thoughts on “Grinder Finance – Weathering the Eldrazi Winter with Standard”