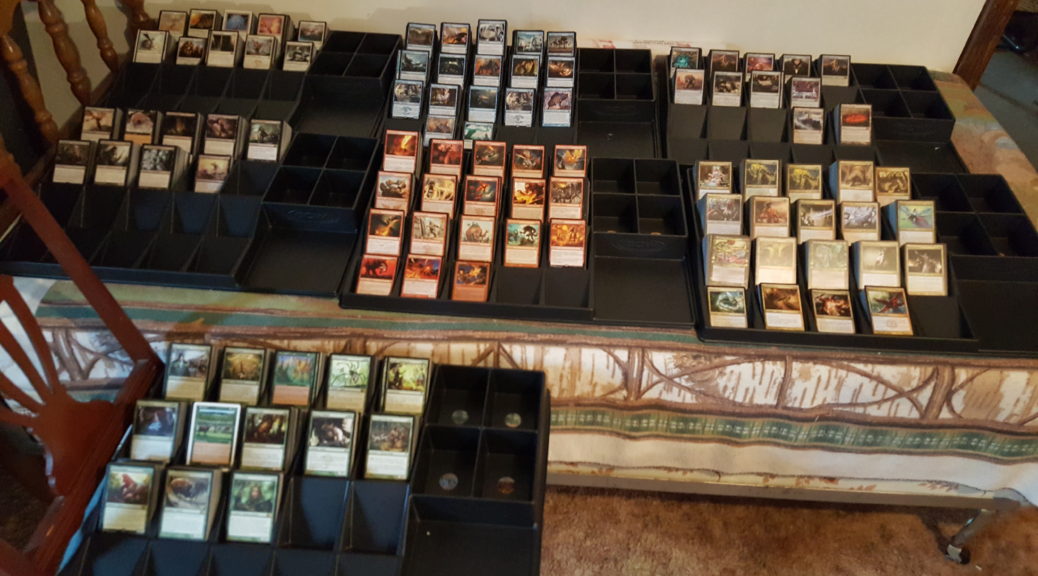 It’s no secret that I absolutely love bulk rares. I’ve written multiple articles on the subject, and I pride myself on having a pretty solid niche in a community with so many prolific writers. If you’re interested in a couple of primer articles on what I’ve already talked about before we delve deeper down the dime ditch, you can find a piece on “Bulk Rare EDH“, and one on the difference between what I’ve deemed to be “true bulk and fake bulk.”  We’re going to touch on a little of both today, in addition to another project that I’m going to be undertaking.

The last time I wrote about Bulk Rare EDH was almost exactly one year ago, and I’ve since taken apart that Tasigur list. It ended up being too frustrating trying to play three colors with next to zero playable mana fixing, since we were locked out of effects like Cultivate and Chromatic Lantern. Half of the deck’s games were lost to mana or color screw, and most of the other half were lost because I was spending the first six turns casting cards like Eye of Ramos and Into the Wilds just to try and find a certain color of mana.

I still loved the concept of Bulk Rare EDH though, even if I found out after a quick google search that I wasn’t the designer of the format.

So what to do now that Tasigur was a dud? Well, I decided to cut my old rule of excluding the Commander from bulk rare status. That was only a personal exception because I wanted to build banana-man anyway. I also decided to clean up the cut-off point for cards at $1.00 TCG mid, for consistency’s sake; I just promised myself that I wouldn’t use *too many* cards from the dollar box, whatever that meant. So this time, the goal was to focus on a deck with only one or two colors, for consistency’s sake. Thankfully, one of my “Maybe one day” Commander prototypes on Tappedout.net was already being led by a bulk rare, Heartless Hidetsugu. While I didn’t exactly have anyone else who was following my personal rule restrictions, I still wanted the deck to be able to scale with the level of the playgroup to some extent. Hmm… I should definitely trademark that. Maybe call it 76% or something like that?

Anyway, this is the first draft that I ended up coming up with: We can punish those richy-rich folk who want to crack fetchlands thanks to Ankh of Mishra, and Burning Earth will barely affect me considering I’m playing 30something Mountains and only a select few nonbasics. I think my favorite combo will end up being From the Ashes with Ankh of Mishra to kill someone outright after a Hidetsugu activation. While some might complain to me that ending games on turn 6-7 isn’t in the “spirit of Commander”, the upside is that we get in three times as many games! The curve is kind of awkward at the 3-4 drop slots, but c’est la vie.

While I was fishing through my bulk boxes to find cards for Hidetsugu and my cube, I decided double up by also pulling out all of the MP, HP, and damaged cards. Some had imperfections that I didn’t notice when putting them in the boxes, but others were damaged by customers not taking very good care of my cards when rummaging through the boxes. I have a setup where I can’t keep an eye on people because my bulk rares are at the shop, but I highly recommend doing so if you have a fat pack or so that you let people skim at FNM. There’s also the whole “theft protection reason”, but if you’re stealing bulk rares than you probably need them more than you need to read this article.

I also happily found a large chunk of cards whose prices had increased from the dime and quarter status into the $1, $2, or $5 range. I hadn’t really pawed through this bulk in the past six months (at least), so I was happily surprised that there weren’t any finance hungry sharks who stripped it clean on a weekly basis.

I know that the subheading says 1000% growth (implying that I bought all of these at 10 cents each and would sell them for a dollar each), but that’s not always true. It’s not exactly like I plan on being able to sell a dozen copies of Conjurer’s Closet over the next week at $1 each, even if I jam them in my dollar box. Most of the readers of this column don’t have a display case-esque situation, so those readers will likely be hoping to buylist the cards in the below pictures. Even in that situation, you’re still making 300-400% as long as you stuck to the rule of “Buy or trade for English, Near Mint bulk rares that have a gold symbol for ten cents each”. 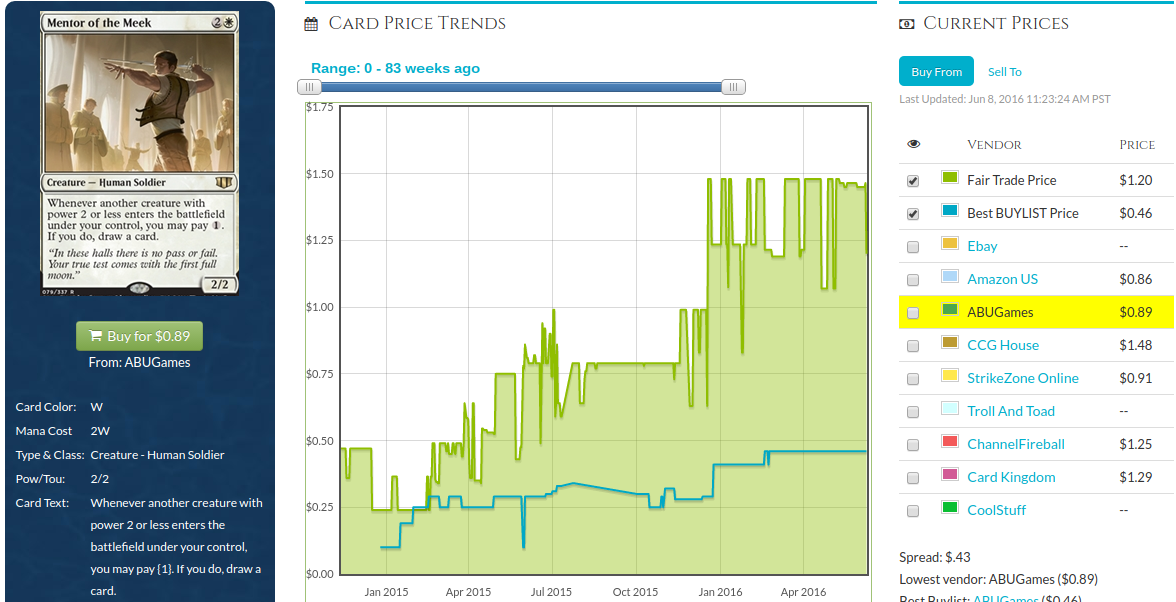 Mentor didn’t exactly have a singular reason to go up, it’s just that people like drawing cards for cheap; mana and money. When a bulk rare lets you flood the board with tokens, use up extra mana, and draw cards, that card usually doesn’t stay bulk for long. While you might be mentally responding to this paragraph with “something something Bygone Bishop, I’d still stay away. Remember that Mentor took multiple years to pick up, it works on Tokens, and you only have to pay one mana per draw. I don’t actually like Bishop (Well, I like every rare at a dime, but some I like better than others.)

I personally play Dark Impostor in my Marchesa, the Black Rose list and am usually satisfied with how effective he his in the late game. Stealing activated abilities is usually just icing on the cake, and the +1/+1 counter subtheme helps with Marchesa. However, I expect the real demand to be coming from casual vampire tribal, where players are always happy to steal abilities from other creatures and where removal is more scarce. 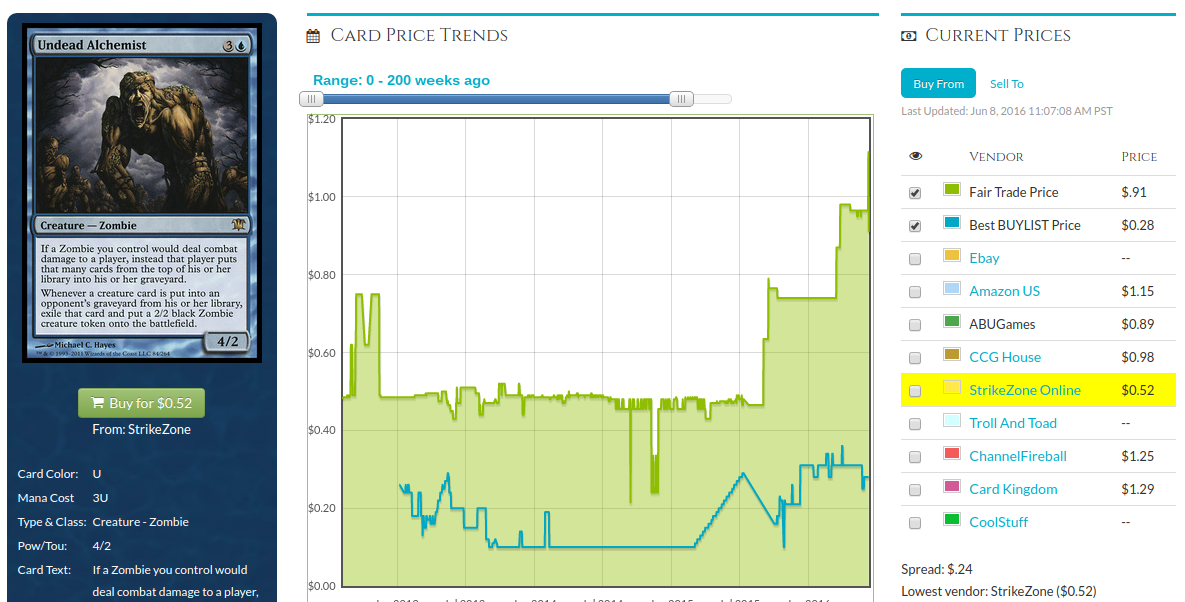 Zombies. Innistrad. Return to Innistrad. Zombies. Need I say more? Oh, right. Mill. Three things combined into one card. Tokens. Four things. While I’m happy selling these out of my dollar box, I don’t fault you for wanting to eek a few more pennies out if you feel like throwing playsets in the spec box and waiting a while. 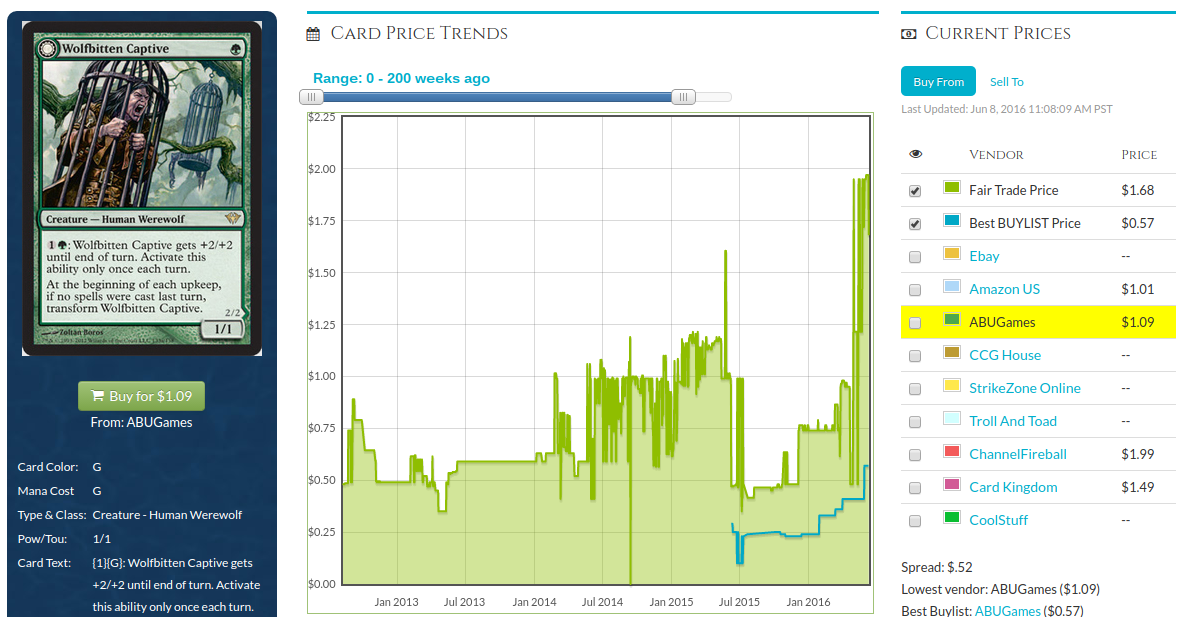 While Mayor of Avabruck was the main Werewinner out of the SOI release (and one that I’ll always feel a pang of regret about when typing), several of the other previously bulk rare Werewolves suddenly transformed into $1 bills. 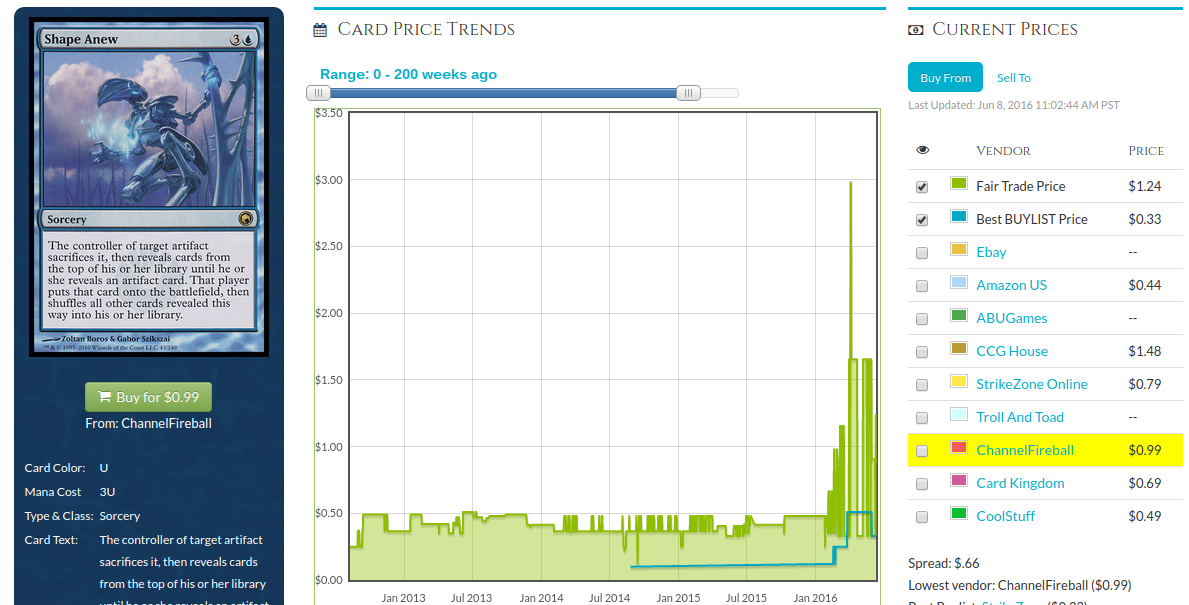 This jumped a few months ago from a silly Modern deck that tried to put Blightsteel Colossus into play. It didn’t work out, but Modern brewers will always tinker (heh) with this kind of effect, and we could see some interesting new artifact mechanics out of Kaladesh. I’m happy with my large percentage jump, but there’s very low risk in holding onto these.