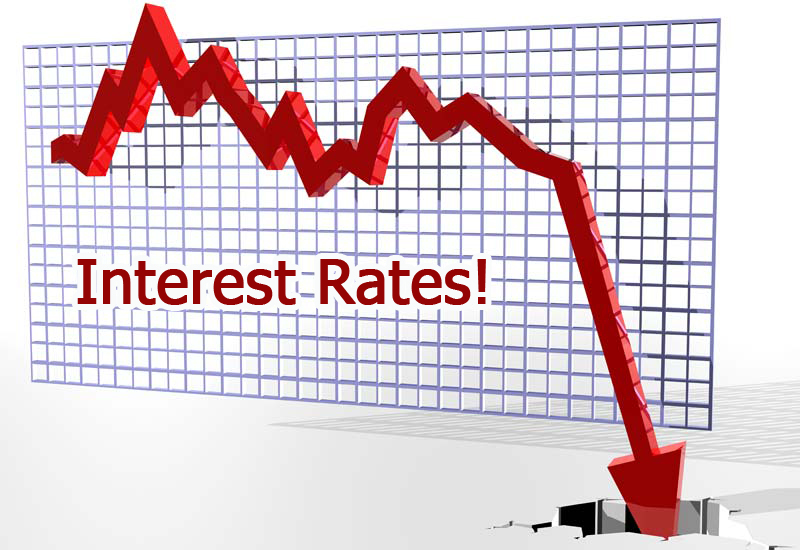 Something I hear about more frequently nowadays is the concept of a “fixed value” for a given Standard set.  In other words, once a Standard set is released and enough cards enter circulation, card prices adjust so that eventually the set’s overall value levels out at a specific number.  Call it $120, $140, or the cost of redemption – call it whatever you’d like – the MTG finance community largely embraces the concept that a single card can “absorb” most of the value of a set and push down the value of the rest.

This sort of constraint is limited fairly narrowly to sets that are still in-print and/or redeemable from MTGO.  There’s no similar limitation, for example, on the value of a Legacy and Modern deck.

This week I’m going to take a look at a few interesting trends across these eternal formats, and in turn develop some hypotheses surrounding the recent jump in many cards’ prices over the past few months.  Ultimately I’ll answer the bottom line question: are reserve list and other older cards in a bubble?

This morning I was browsing values on some of the most popular cards in the Modern metagame.  I immediately noticed that some of the hottest cards – some even popular in Legacy – have been dropping in price aggressively.  Snapcaster Mage immediately comes to mind: 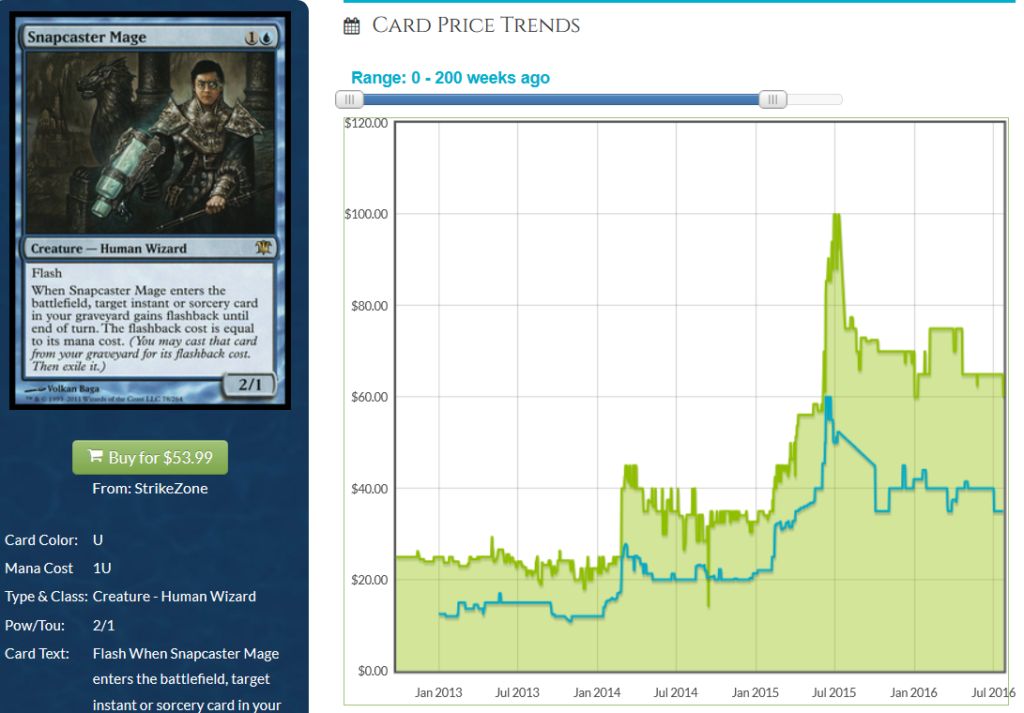 Then again, this card did just see a promotional printing.  So let’s take a look at something also very popular in Modern that didn’t get reprinted in the past 6 months: 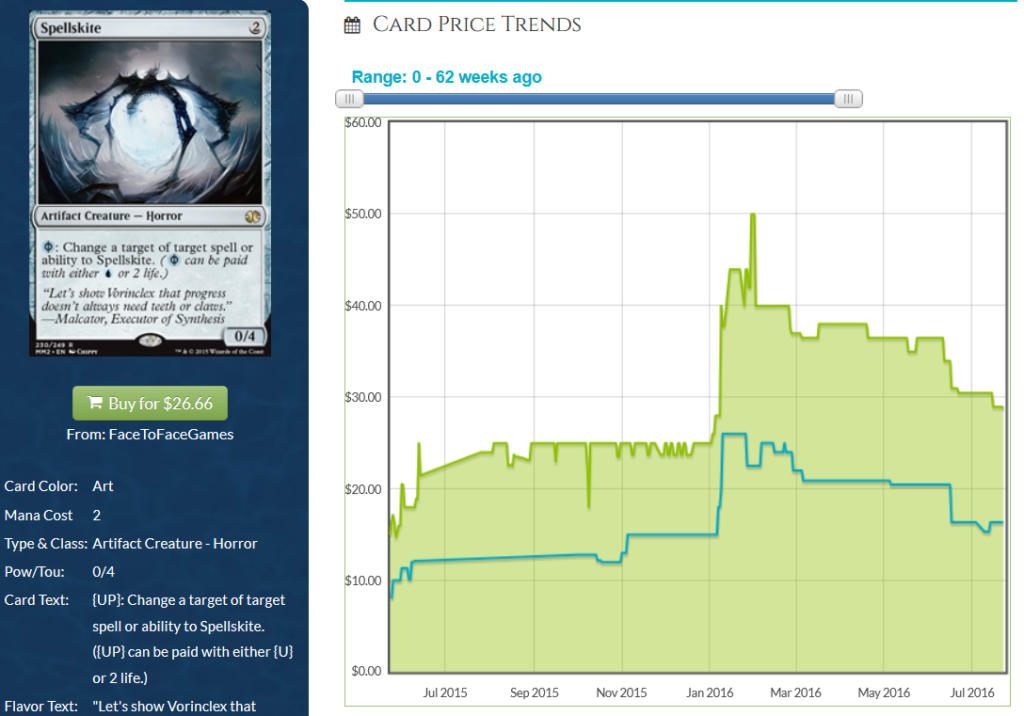 Perhaps Spellskite is suffering due to the banning of Splinter Twin in Modern.  It’s price did peak in January – the same month that Splinter Twin’s banning was announced.  Though it’s worth noting that this card is still a major staple of Modern.

And who could forget the savage beating Remand has taken lately due to its multiple reprints. 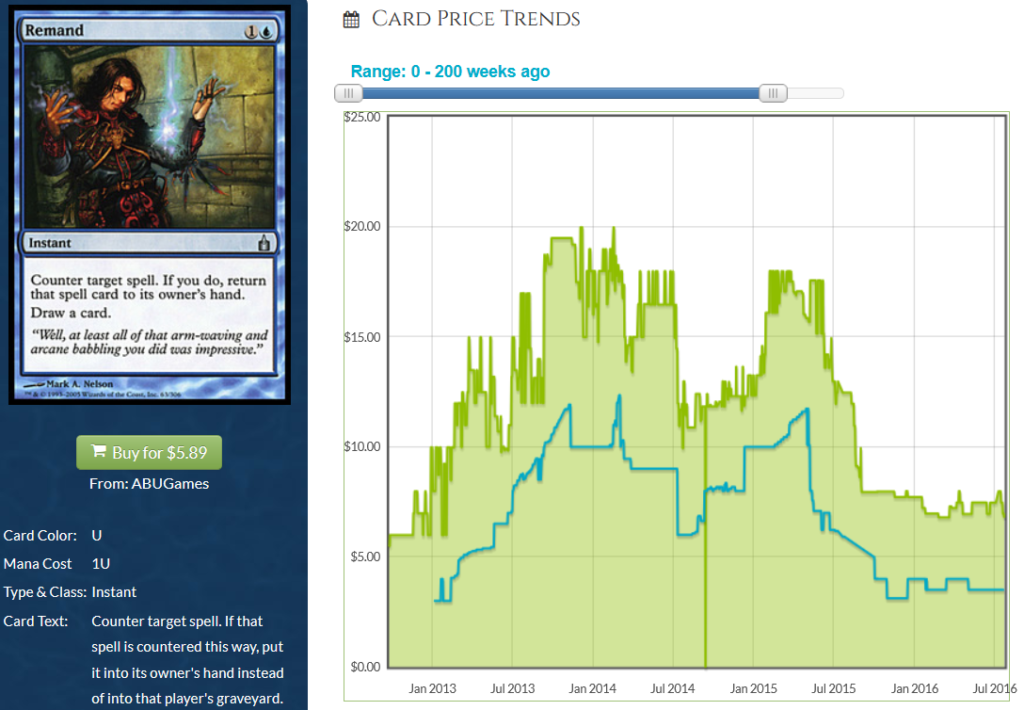 The charts above could lead one to believe the end is truly near for Modern.  After all, these are significant drops!  However, the interesting point I want to highlight is that while these Modern prices tumbled, a few other Modern cards have seen recent all-time highs!  Consider, for example, the Modern Masters reprint Kitchen Finks: 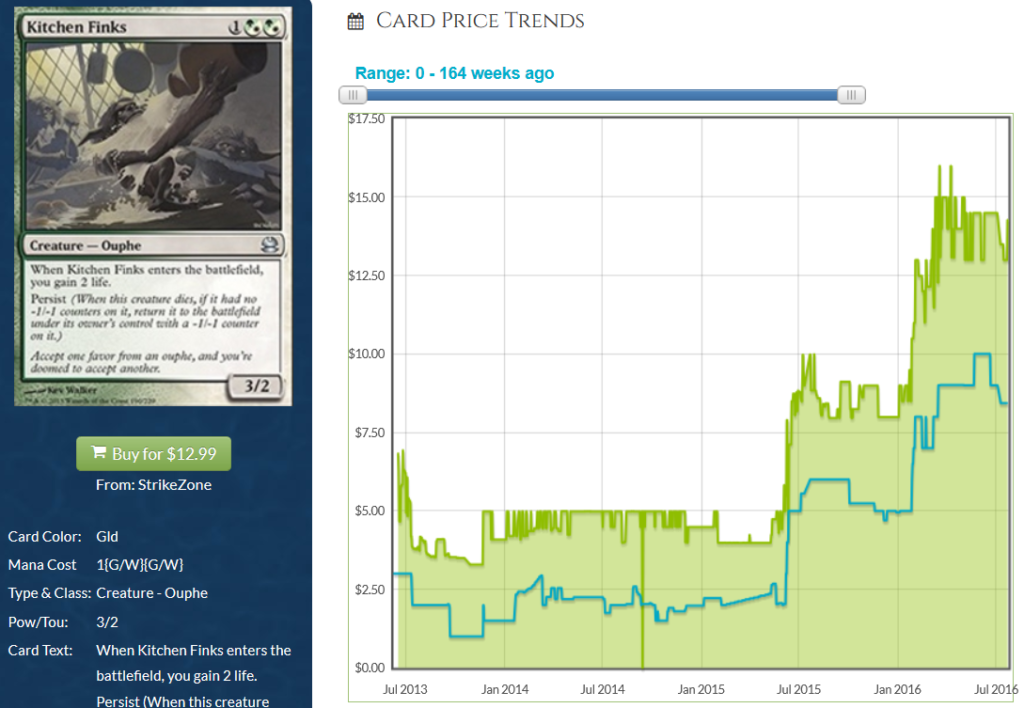 Collected Company broke into Modern and has filled the void in Melira combo decks vacated by Birthing Pod’s banning.  Therefore it’s no surprise to see this critical 3-drop storm to double digits despite the reprint.

Noble Hierarch is another card that was reprinted (this one far more recently) and yet has been overcoming the new supply and rising in value.  The Modern Masters 2015 copies are even hitting all time highs as we speak. 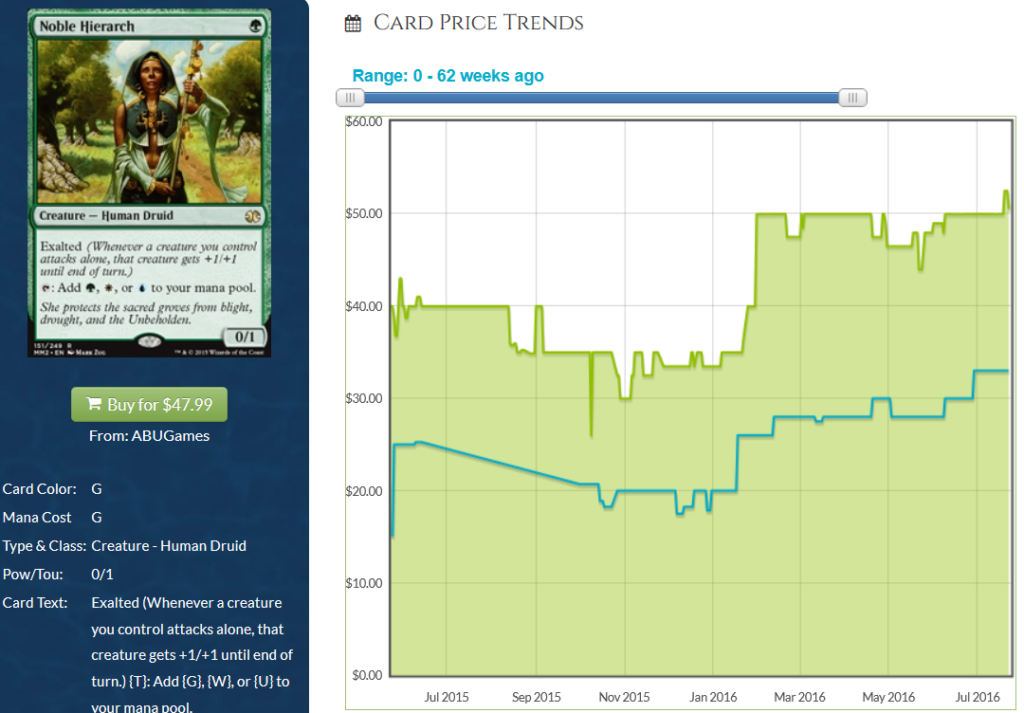 And who could ignore one of the greatest Modern gainers in 2016, sideboard tech Stony Silence? 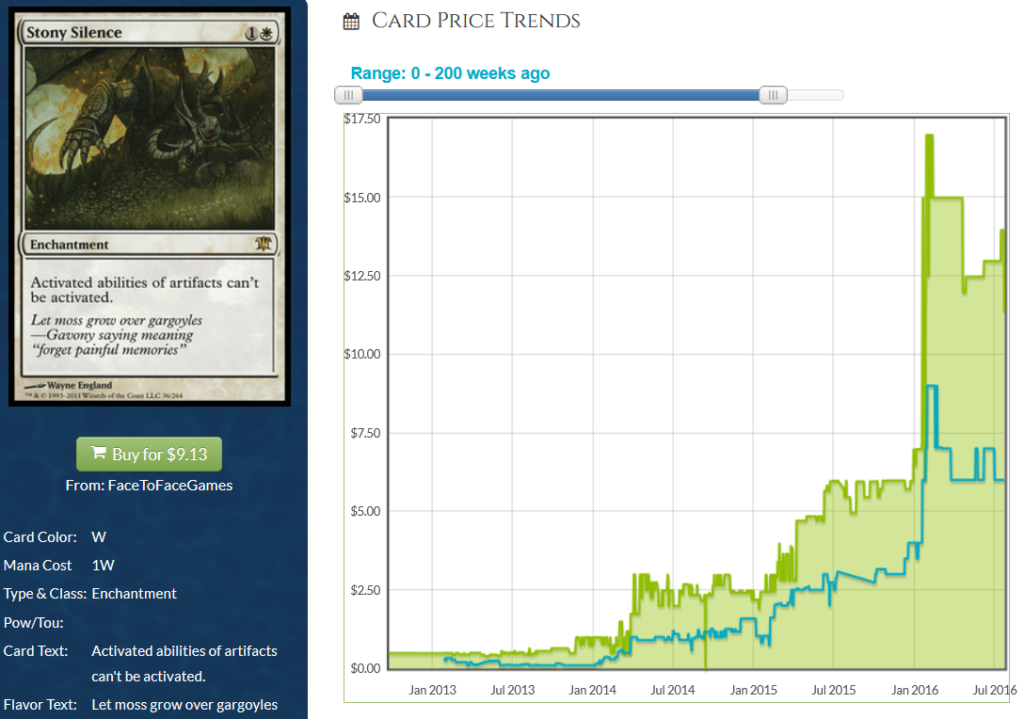 All of these price movements can be explained individually with a fundamental idea.  Noble Hierarch is rising because it’s utility across multiple successful decks.  Stony Silence has surged since Affinity has strengthened in the Modern metagame.  You’ll also see easily explicable growth in cards like Inkmoth Nexus and Cavern of Souls.  Equally, there’s an explanation for price drops in those like Inquisition of Kozilek and Gitaxian Probe.  It almost seems like for every increase there’s an equal but opposite decrease.

Now let’s take a look at some Legacy charts.

When Eternal Masters hit hobby stop shelves worldwide, people had already anticipated what was to come – but only to a limited extent.  What I mean is, players knew Legacy staple reserve list cards were bound to jump.  This caused a small, temporary run on cards like Mox Diamond. 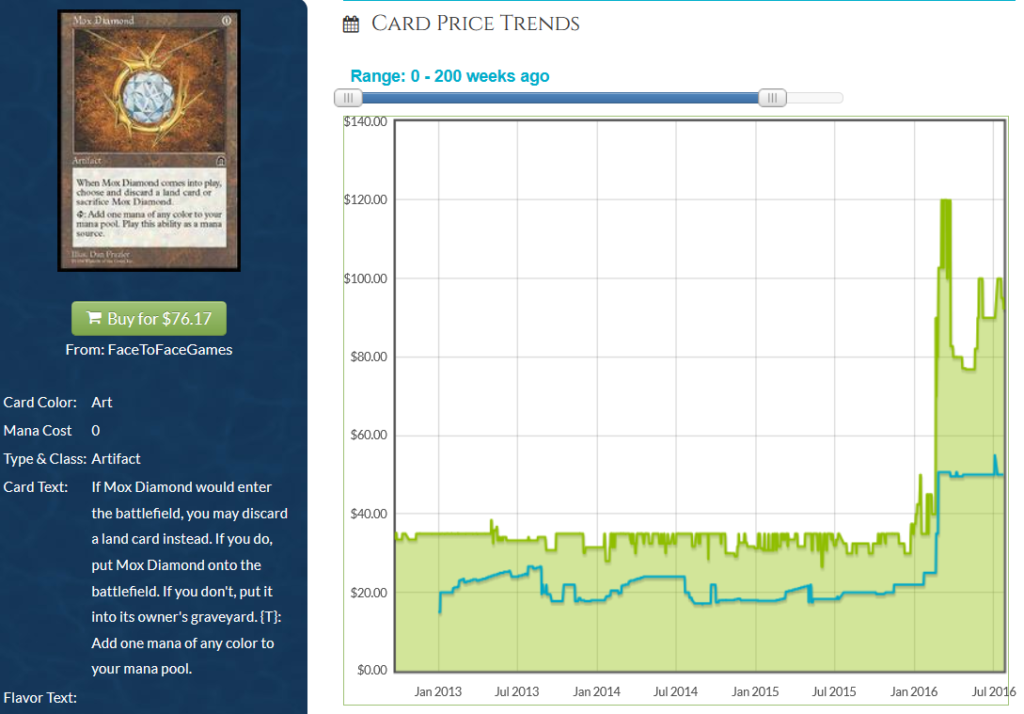 However the buyout was premature – after spiking to $120, the card immediately sold off again to reach a still-respectable plateau of $80.  That is, until Eternal Masters had sufficient circulation.  Now the card is butting up against that triple digit price point and it’s only a matter of time before it breaks through.

Perhaps the most noteworthy trend I’ve been following for Legacy staples – outside of buyouts and attempted price manipulation – is that of Dual Lands.  Some of the more popular duals have been screaming higher in a somewhat under-the-radar manner. 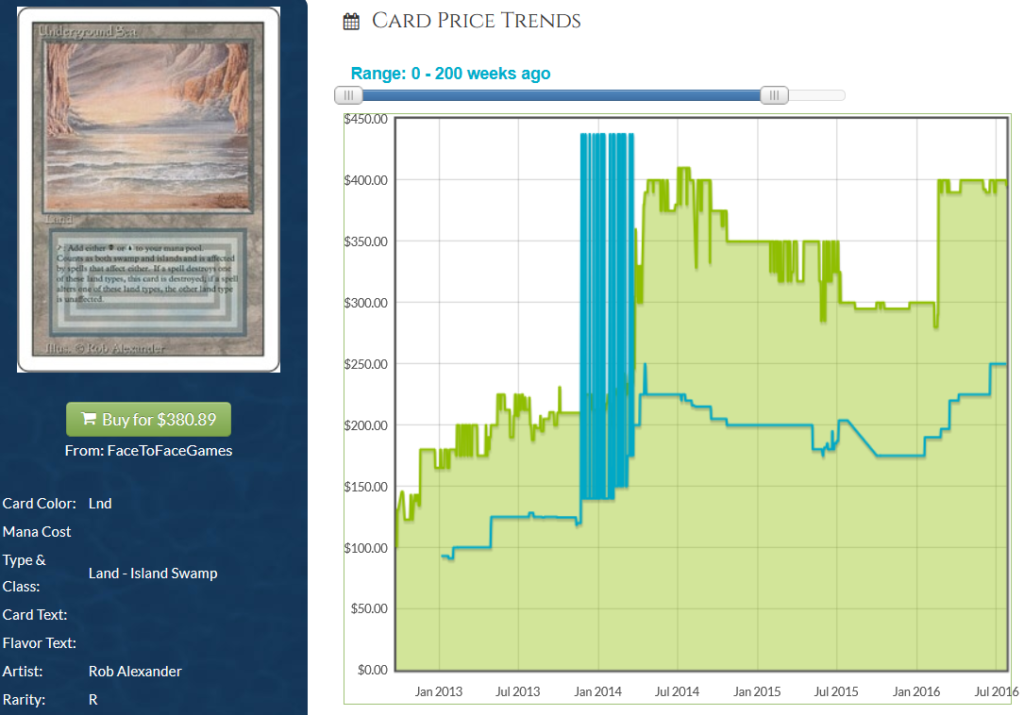 When Underground Sea last hit $400, many in the MTG community screamed foul.  And in fact, it did feel like that price target was forced a bit.  But here we are again at $400 – with even higher buy list prices – and no one is blinking (or if they are, they aren’t vocal on social media).  And it’s not just the most played duals that are moving.  Check out one that I’ve had my eye on for weeks: Taiga. 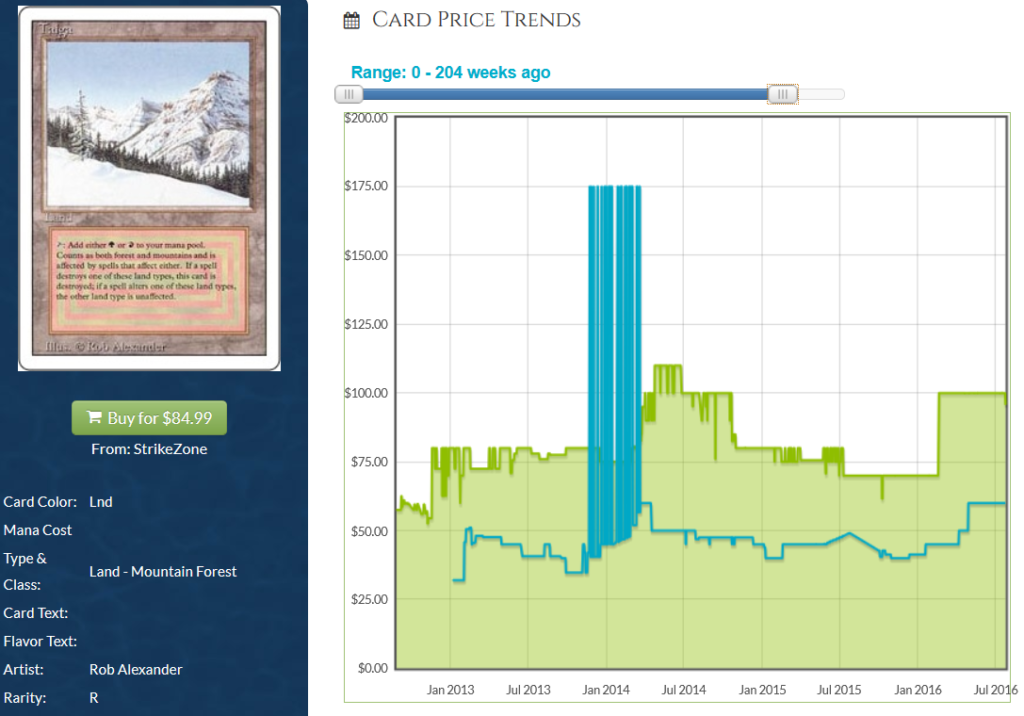 Again we see a dual land peaking in 2014, selling off, and then returning to new highs.  Could this be a tremendous Legacy Renaissance?  Is the format surging in interest on the heels of Eternal Masters?

Possibly, but I need to now address the other side of this coin.  As reserve list staples surge higher, many Legacy staples have sold off dramatically in the wake of Eternal Masters reprints.  Karakas comes to mind first because the loss I’ve taken on my single copy hits closest to home.  But I wanted the card for Legacy, so I knowingly signed up for the downside. 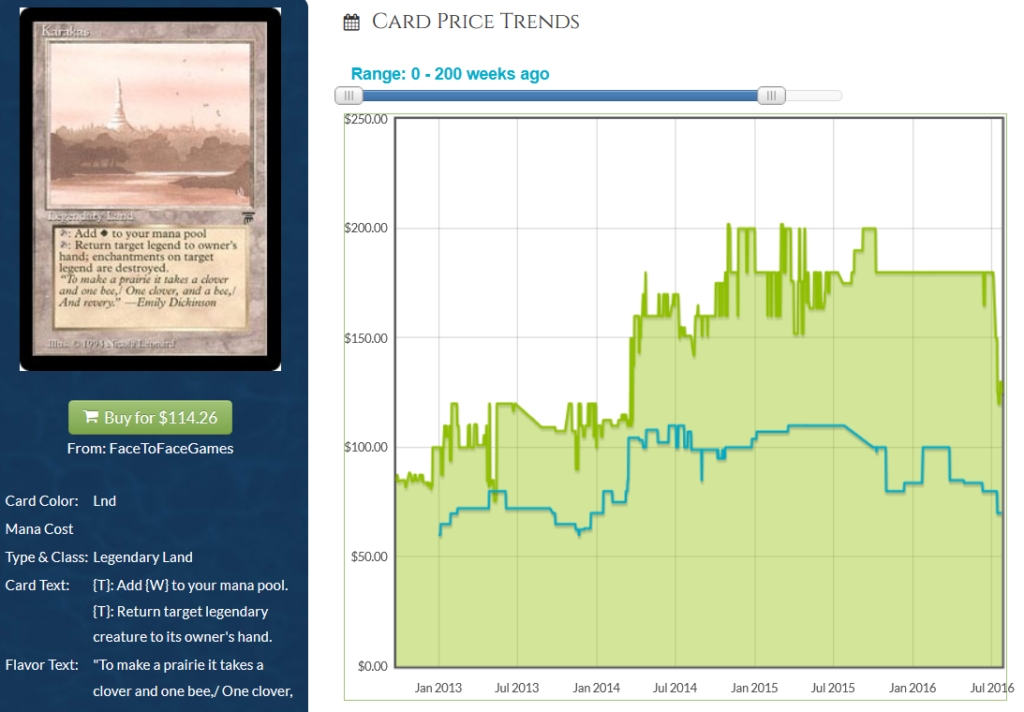 Despite being reprinted at mythic rare, the Eternal Masters reprint of Karakas really punished its price.  Rares in the set were set back even further.  Wasteland is one of the most played cards in Legacy, yet the card is notching two year lows on the recent reprinting. 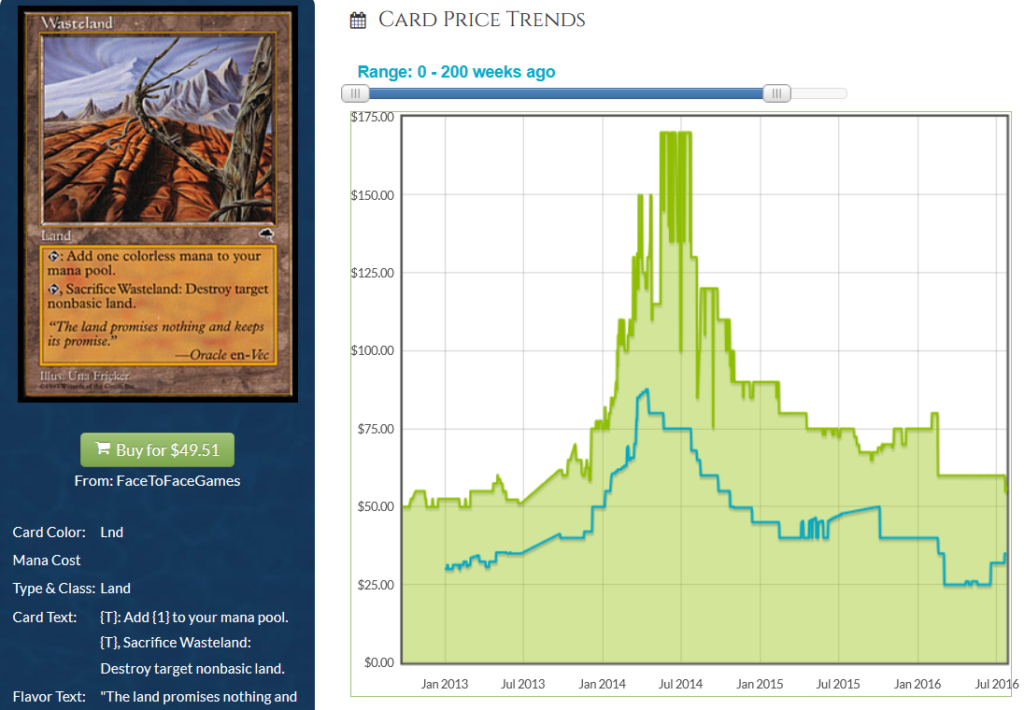 Other cards that have suffered in price include Cabal Therapy, Jace, the Mind Sculptor, and Sensei’s Divining Top.  Of course these are balanced out by surges in cards like Counterbalance, Surgical Extraction and Lion’s Eye Diamond.  Some prices are dropping and others are on the rise.

Is there Incremental Money At Play?

Analyzing solely the data presented above, one may conclude that there’s no incremental value flowing into Magic.  However I’d have to disagree with this conclusion, and the reason is related to cards I haven’t even mentioned yet: Vintage and Cube staples.  No matter how much cheaper Mana Crypt gets due to its reprinting in Eternal Masters, it cannot overcome the fact that Library of Alexandria has gone from $300 to $800 this year.  The Tabernacle at Pendrell Vale’s growth is likewise not explainable by the reprinting of Gamble.  Even if a playset of Gamble was given away at every Legacy Grand Prix, they wouldn’t get cheap enough to counteract the $300+ gain in Tabernacle.  Something more is clearly at play here.

My hypothesis is that there’s another driving force beyond just shifts in value from some cards to others within a metagame.  For high end cards to continue their climb, there must be incremental money entering the game.  And I can support this hypothesis with macroeconomics.  Consider this: interest rates are near historic lows – in some cases outside the United States, treasury yields are negative!  That means you can basically purchase a 10-year bond from the government (essentially giving them a loan) and you’d get less money back after ten years than what you provided.  Yup.  Negative interest.  It’s a reality.

This phenomenon has driven investors to look for places to park money in order to earn some sort of stable return.  Usually this void is filled by bonds and CD’s.  But when you’re getting less than 1% interest on these products, it drives people to look elsewhere.  Dividend paying stocks, such as Verizon, are hitting ten year highs as a result.  People throw caution into the wind and ignore valuation – they see a juicy 4% dividend and they pile in.

As investors struggle to find safe yields, they’ve been amassing large cash balances.  So to avoid sitting on piles of dead money, they begrudgingly put their precious resources to work in the stock market.  This is one reason why the market is hitting all-time highs – there’s simply nowhere else to go for reliable returns in this low-rate environment.

Or is there?  I’m going to go out on a limb here and suggest that at least a small amount of the most savvy MTG finance investors are looking at Magic as a superior alternate investment vehicle.  It may sound unlikely, but in reality it doesn’t take much for such a consideration to become reality.  People like Rudy from the Youtube channel Alpha Investments know that they can’t get better, safer returns from the market right now.  I myself have recently added to my MTG portfolio, lifting my exposure to the collectible card game to a personal all-time high.  In my brokerage account I’m unhappy with the funds sitting in cash earning 0.01% interest.  So why add more when I see attractive opportunities in Magic?  I’d wager Rudy and I aren’t the only ones thinking this way.

What does it all mean?  I’m drawing two conclusions here.  First, I think the concept of Modern Masters and Eternal Masters sets reducing price of entry into eternal formats is a complete fallacy.  All Modern Masters sets do is shift value from one basket of cards to another.  For every Vendilion Clique and Dark Confidant there’s an Inquisition of Kozilek and Inkmoth Nexus.  It’s impossible for Wizards of the Coast to support Modern’s growth as a format and simultaneous reprint cards fast enough to keep values manageable.  And I’ll go as far as to say that Eternal Masters sets does more harm than good for the secondary market.  All these sets will do is push down values of reprintable cards and concentrate value in high end reserve list staples – thus rewarding those with large reserve list collections and strengthening the 1% of MTG finance.  In turn they can convert these profits into the very high end and drive prices to even higher levels.

The second conclusion I’m drawing is that I believe there is a growing number of MTG investors who recognize the opportunity in front of them.  Anyone who deals with the stock market and the MTG market can see how investments in high end reserve list cards and strategic sealed booster boxes are highly attractive versus an inflated stock market.  This is precisely why I personally decided to allocate new funds to my MTG account instead of my stock market account for the first time in three years.  If I want a safe, steady return I frankly like Origins booster boxes more than an expensive Verizon stock at this point in time.

So where do we go from here?  While I do see interest rates rebounding eventually, I’m not sure if that’ll drive prices of reserve list cards down at all.  If I think about Magic from the long-term view perspective, the value of Power, duals, and other high end reserve list cards will be proportional to the longevity of the game.  If Magic is around for another 23 years, I shudder to imagine what a Black Lotus could sell for at that point in time.  Considering a Honus Wagner baseball card sold for over $2 Million back in 2012, I’d say Magic cards have plenty of runway.  While the Honus Wagner card is far older and rarer than Black Lotus, there is one thing the Lotus has going for it.  People can’t enjoy playing a fun game with their baseball card…

15 thoughts on “PROTRADER: Why the Rich are Getting Richer”