I’ve decided to start a little mini-series, appropriately titled “WTF is _” to take some time to discuss some topics that might not necessary be the most important finance topics but tangentially related to the cost of cards as a whole.  The first topic I’m going to talk about is collation.

Well if you go look up the word collation, it doesn’t make a whole lot of sense in the way it’s used to describe Magic product so I’m assuming someone made the stretch to fit at some point in time.  I don’t know the etymology of the phrase but I know what it means.  Collation in Magic terms refers to the distribution of cards in a booster pack (or packs in a box, etc).   But before we can really dive into Magic’s collation process and what it’s doing today, we need to talk about the printing process first. 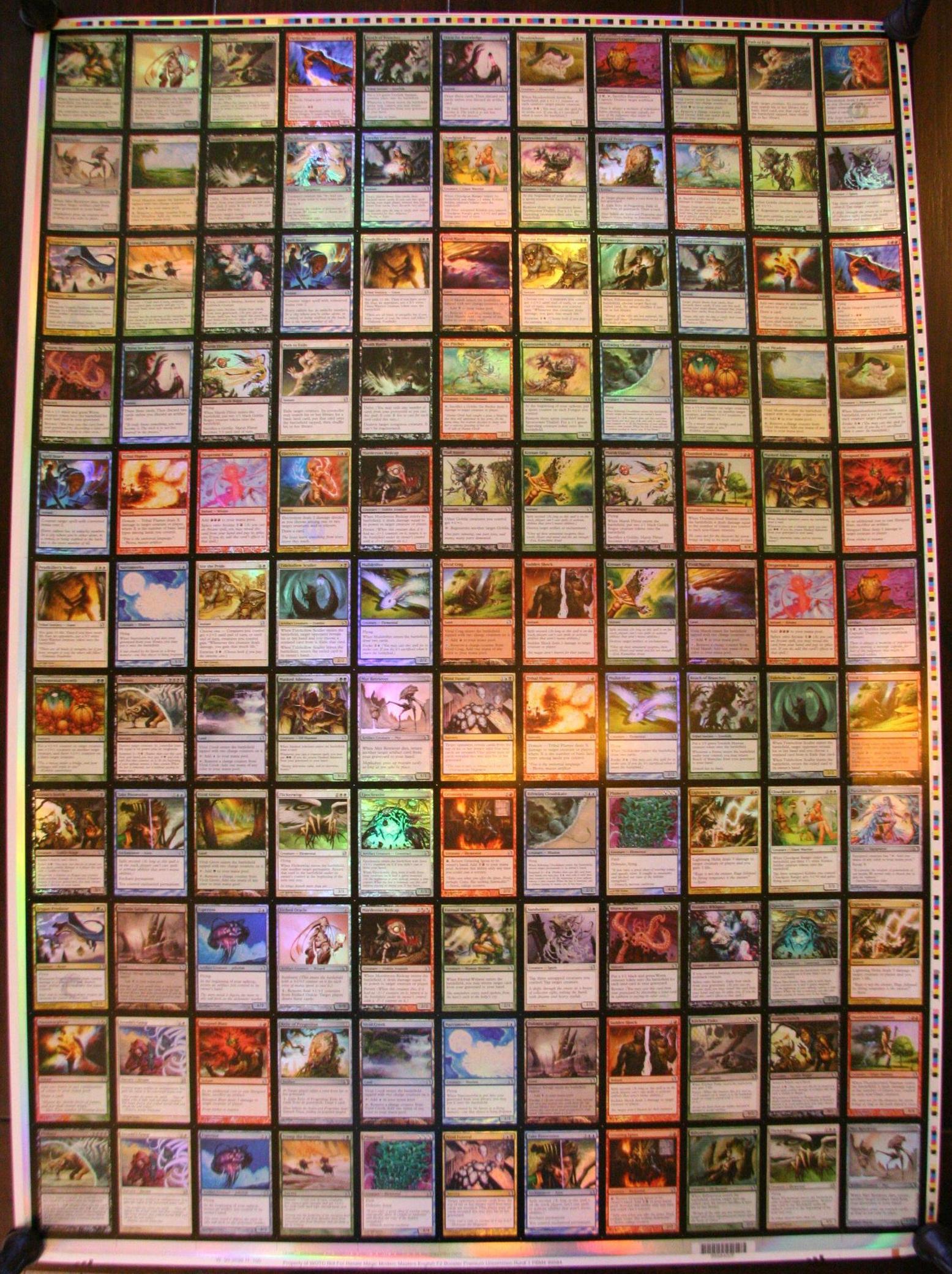 Since the dawn of time Magic cards have been printed on huge sheets of card stock and cut down into the much smaller cards we all play with today.  It’s not uncommon to see foil uncut sheets like these available at Grands Prix’s prize walls.  Generally each set has 3 sheets for each of the 3 rarities.  Generally…

As a young upstart company without presumably a ton of financial resources it’s no surprise Alpha was a huge source of printing problems.  You ever want to make a vendor roll their eyes?  Ask them if they have any Alpha Volcanic Islands for sale.  Alpha was missing two cards that were part of Beta (Volcanic Island and Circle of Protection: Black) and that’s not even the worst part.

Here is a picture of Mark Rosewater standing in front of an uncut sheet of Beta rares.  You might not notice it quickly but I count 4 (FOUR!?) basic islands on this rare sheet and I can’t even see the whole thing! 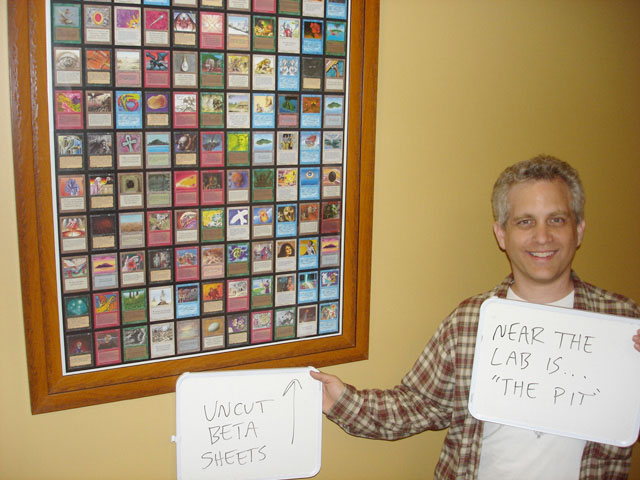 In this second picture (of presumably a common, rare, and uncommon sheet) there yet still more basic lands on the uncommon sheet.

The short version of this story is don’t buy an unopened pack of old Magic.  You could get some very bad cards as your rare.

Have you ever heard someone say something’s rarity is “U2?”  No they’re not talking about the band, but rather another experimental and now defunct printing process (kind of).  Most people assume that the Legends Karakas is an uncommon and so is Mana Drain.  They’re from the same set, right? Well yeah but technically, Karakas is a U2 and Mana  Drain is a U1 which means there are twice as many Legends Karakas in existence than Mana Drains.  The U1/2 distinction is how many times each card appeared on the uncommon sheet.  That also happened with the common sheet which lead to some weird situations.  Hymn to Tourach is a C1 in Fallen Empires but it has 4 different arts so it’s on the sheet 4 times…  Some commons only had 3 different arts (this different art experiment was also a bad idea) which means despite them both being C1, there are more of some than others.  But Fallen Empires also has other problems like it only being printed on two sheets (the other sheet had U3, U2, and U1 cards – which were Uncommons, Slightly more Uncommons, and Rares).  Wizards has since learned something from these mistakes.

Today, there are 3 sheets.  Commons, Uncommons, and Rares.  But wait, what about mythics?  Well it’s pretty simple to explain.  With the introduction of the colored set symbols to denote rarity, it became imperative that each card at the same rarity was the “same rarity.”  Some cards, like Mythic rares appear slightly less often than other cards in the same slot so they have a new symbol but they are printed on the same sheet.  The rare sheet for modern sets has 2 of each rare and 1 of each mythic – making mythics twice as rare as rare without the confusing R2/1 notations. But wait, there’s more!  Flip cards can’t be printed on the same sheet as normal cards because they don’t have the same backing.  Thus we have sheets that contain only flip cards and they are cut and inserted into the packs later as well.  BUT WAIT – there’s still more!  With Shadows over Innistrad and Eldritch Moon I am going to go out on a limb and make the assumption that they have split the flip cards into two sheets.  One with commons and uncommons (1 goes in every pack) and one with rares and mythics (1 goes in some packs but doesn’t replace the other flip card).  This printing process is different from Innistrad and Dark Ascension where there was only ever 1 flip card in a pack.

Okay so now that we’ve had that history lesson on what printing is – let’s talk about collation.  In the oldest years of Magic there was no collation.  The cards were printed, packed, and shipped.  Many cards appeared in the same order in booster packs and the same rares in the same order.  I vaguely remember in my earlier years, while drafting Onslaught, that there were some cards that often appeared before or after Sparksmith on a sheet.  With this information I was able to tell if a Sparksmith was likely in the pack and base my further decisions on that.  If you didn’t draft Onslaught you probably don’t get why Sparksmith is so important.  Basically it’s like opening a Pack Rat at common.  Maybe not quite that bad, but whatever – I’m getting off topic.

There have been strides made in order to limit the ability to know what rares would be in what packs.  This is also called “box mapping” and while I don’t do it or endorse it, many people try.  Some boxes are especially susceptible as a few years ago there was an app you could download to help you do it.  I don’t want to say it was box mapping for dummies, but it was.  As you can see here, it only took 8 packs to map out the entire box’s contents.  This is obviously very unsettling to people and had gone on through Gatecrash and Dragon’s Maze. Theros introduced new colation processes that had some packs shift and/or columns move that made it much harder to do.  As far as I can tell, going forward it has been pretty hard to map boxes.

On more than on occasion we have seen some colation failures and it’s almost always at the expense of the player.  Modern Masters 2015 had a comical number of errors.  I experienced two different drafts where the number of cards in the packs was not correct (missing foil, missing rare, extra foil, or extra rare).  Then you have weird stuff like this box where every pack had a mythic.  This also happened in Fate Reforged where there were a number of people that opened a fetchland in every pack. 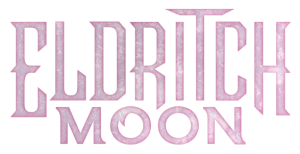 So we have another problem this time.  “Box Mapping” has become too easy for the average player.  As you can see in this video, you are able to tell which art packs in a case has all of the non-flip mythics in that case.  While it’s not quite as bad as knowing where every card is in a box of a set, you can find most of the mythics pretty easily across multiple boxes with this technique.  In fact, after you find one mythic you are very likely on your way to finding them all.  This is a big colation problem and might be a result of using a different colation process from Oath of the Gatewatch which weirdly had 4 booster wrappers instead of the usual 3 of a small set.  It might also be a problem with how they decided to package flip cards from this set and it was masked by the 5 booster wrappers in Shadows over Innistrad.  The short version of this story is don’t buy loose packs.  The long version of this story is all of the words it took to get here.

8 thoughts on “Grinder Finance – WTF is Printing and Collation?”