We are three months away from having the old pattern of Standard be gone completely. It’s a new and exciting time, as we try to figure out what effect there will be on our favorite cards.

Let me introduce you to how things used to be: 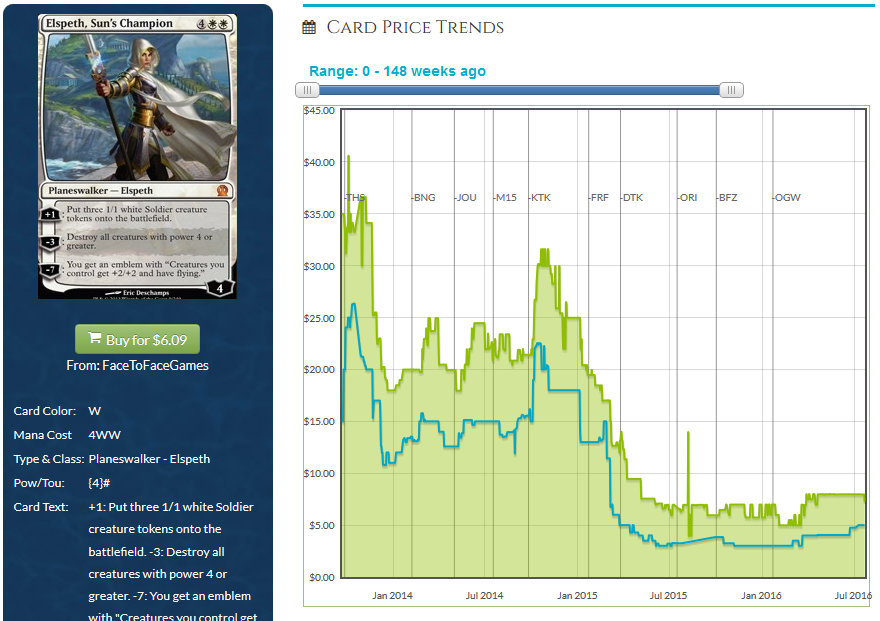 Do you remember her? Tokens all over, fetches finding battle lands, her sick combo with Wingmate Roc, where you could minus her to kill their Rhinos and keep your birds? How about with Devotion strategies? Remember when you had to have a plan for her?

Elspeth was a staple at first, her price dropping down slowly, but spiking when the new block was released. This is a trend that had been well-established, going back more than a few sets, where the next big set would introduce mechanics or decks that played very well with the cards from the previous sets.

Then, when the rotation was about six months away, the card would begin to lose value, as people got rid of extras and tried to keep no more than a playset. Elspeth was hit extra hard, as her Duel Deck vs. Kiora came out about the time of Fate Reforged.

That’s the old way. What harbingers do we have of the new way? 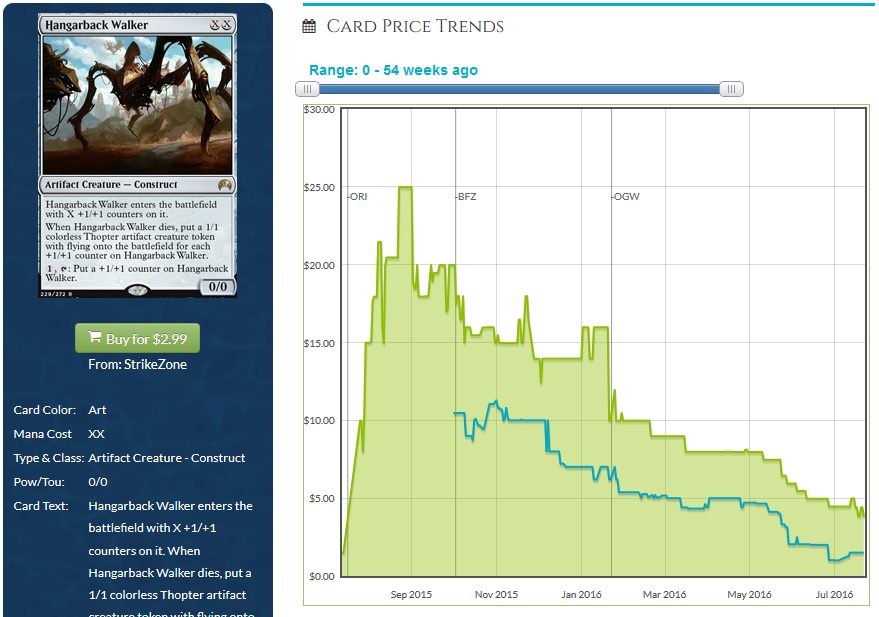 Go ahead and look up how many GW Tokens builds are playing Hangarback. I’ll wait. It’s a long list. This card is a four-of all over the place, it’s seeing some Modern and even Vintage play, and yet here it is, south of $5 for a card that reeks of value! It’s gone down ever since its release!

Maybe it’s because of Magic Origins, maybe because it’s a rare. There are a lot of factors at play and I am not pretending to have all the answers. One card does not define a trend, but good grief, this is a powerful and commonly-played card to be so cheap and to have consistently fallen in value. 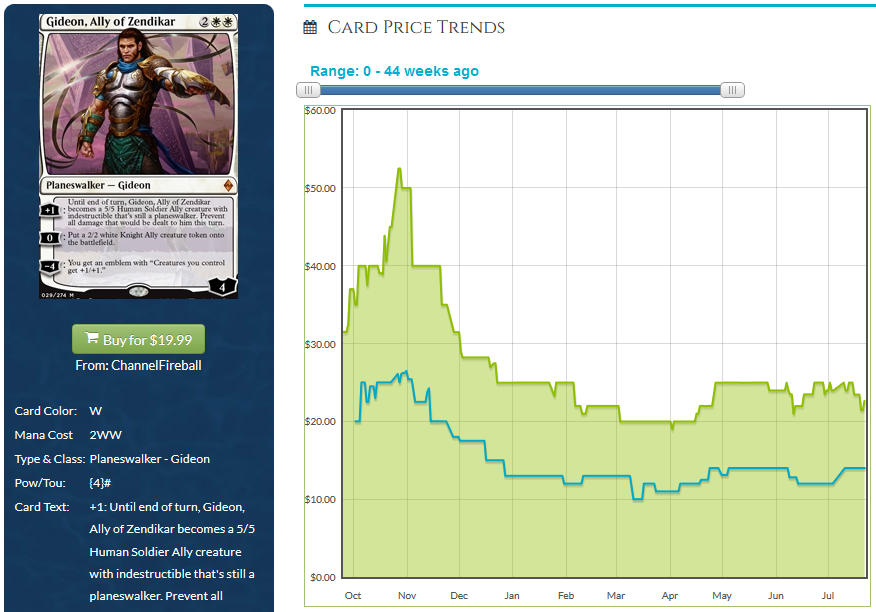 Gideon is the first planeswalker in some time to be an automatic four-of, because his emblem is an easy out for extra copies. He is just as ubiquitous as Hangarback, and is a mythic! Despite all that, he is staying stable. The rotation for him is in 2017, so he’s got three sets to create a new pattern.

But will he? I like stability, but what I really like is the chance to go up. Unfortunately, that’s all it is right now: a chance. If there were more time to go, I’d like his chances more, especially as he’s BFFs with Nissa, Voice of Zendikar. That’s a combination I would like to put serious money on, except that the window for profit is a lot smaller. 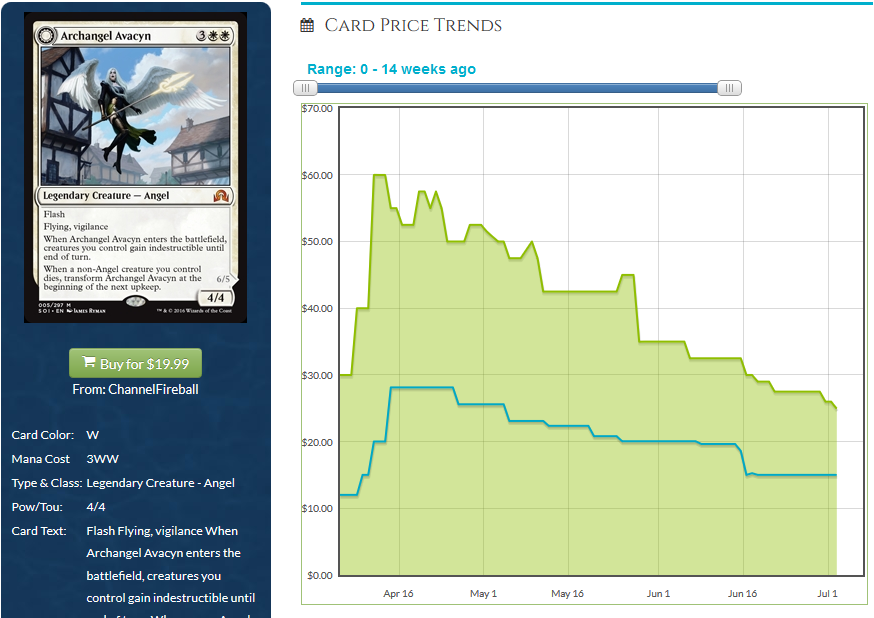 Avacyn is still being opened. She’s in one pack of Battle for Zendikar and we’ve got three months of EMN-EMN-SOI in front of us. She hasn’t hit maximum supply yet, but she’s so good and played so frequently that you might expect her value to be trending upward. Not at all, though, not at all.

I’m looking around, and I’m seeing a pattern of cards that are fantastic in Standard not growing in price as they used to. I’m not sure if it’s the timing, or increased awareness, or greater supply, but Standard doesn’t seem to have the big gains it used to.

Sure, we get spikes on Demonic Pact when Harmless Offering is spoiled, or Day’s Undoing gets a couple bucks thanks to a new prison-style deck, but those are small and don’t appear to be sticking around. Plus, those are rotating when Kaladesh arrives, and no one is going to buy more than the fewest possible.

So if Standard isn’t where we find the chance of increasing value, where do we look? 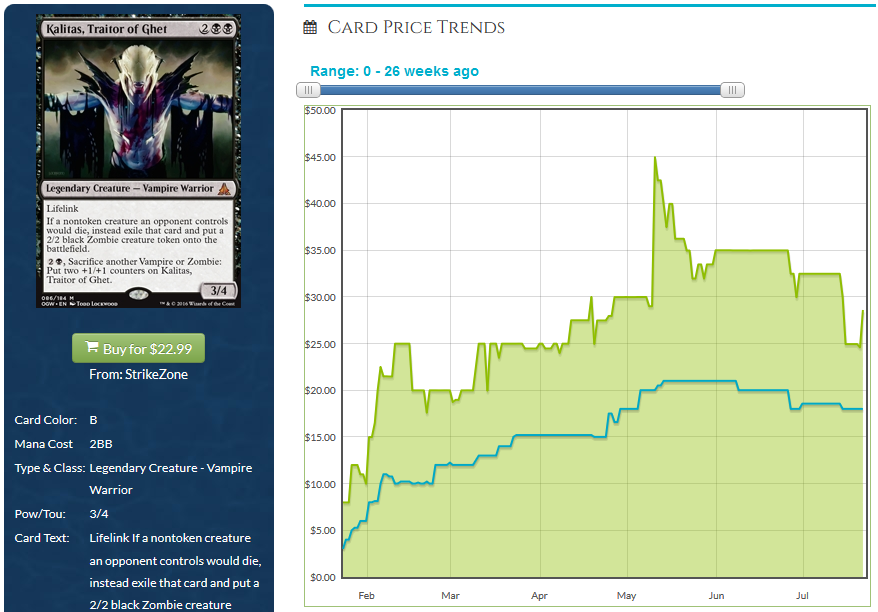 Kalitas is not nearly as commonly played as Gideon or Avacyn, yet he’s worth more. He’s a small-set mythic, true, but look at where he’s seeing consistent play that the other two aren’t: Modern.

I’m also paying attention to Ulamog, the Ceaseless Hunger. He’s golden in Tron, a turn-four play if you get the set plus an extra Tower. Oof.

Want another example? Look at Nahiri, the Harbinger. Same set as Avacyn, played in a lot less decks, worth about $5 more. She’s a two-card combo that takes a little time and has some potential for disruption, but the power, and the price, is worth the attention.

I’m not saying this is the pattern for all time in the future. I don’t have enough data to make that prediction.

What I am doing is keeping an eye on these cards, and others, in order to make sense of things. Maybe Gideon will spike in Kaladesh. Maybe Kalitas falls off the map. We will have to see, but these slow decreases for very good Standard cards may be the new normal.

I think Gideon and Nissa are going to tell me the pattern for the new Standard. If they go up during Eldritch Moon or Kaladesh, and then drop like rocks during Aether Revolt, that would mean the old pattern is still in play, just on a condensed timeline.

What I suspect, though, is that people have learned their lesson about the value of cards as they approach rotation. No one waits to out their extras anymore, and that could mean a whole new pattern to learn.

6 thoughts on “The New Pattern?”