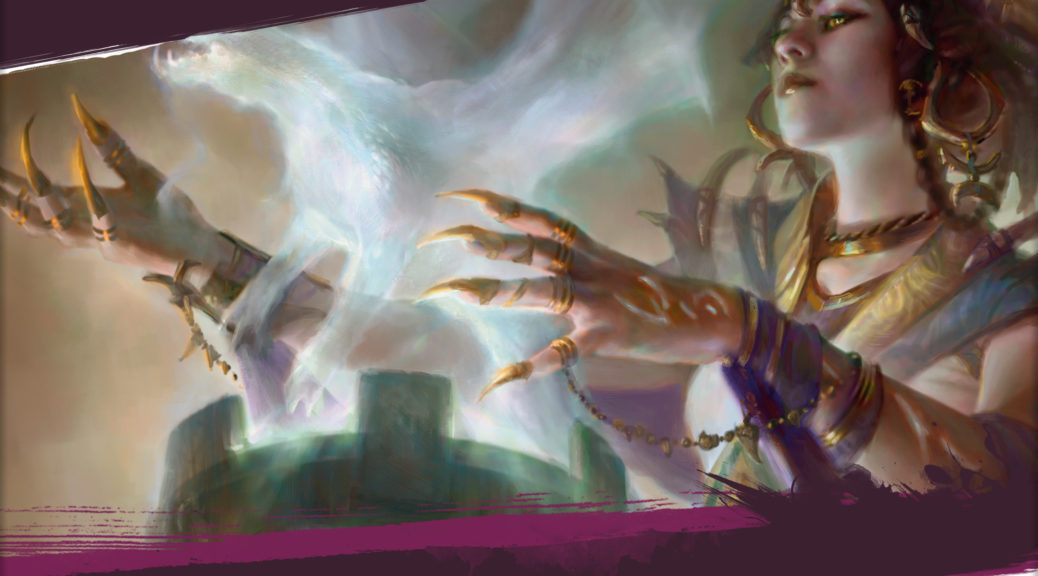 Okay, so the timetable for this weekend is a little… wonky. Because the Pro Tour is being held on the lawless, marsupial-infested island of Australia, coverage is going to be starting Thursday night (in the US), with the constructed rounds happening while many of us are asleep. I’m going to include my brief thoughts on what I suspect we might see, while also touching on a (semi-related) point that may offer more long-term action. Then, if I need to pad my word count, we’ll talk about The Bachelorette or something.

PT: EMN: Even though we have had some pretty major changes to set releases and rotations, the timeline for Pro Tour technology has sneakily stayed pretty consistent since the adoption of the SCG Tour. Prior to having SCGLive on screen the day after a set release, there weren’t major Standard events before the Pro Tour. Now, however, we have two weeks worth of decklists to inform our decisions on the weekend ahead- but how reliable is that data? In this particular instance, I would guess that Bant Company will be an influencial archetype on the weekend metagame, but not in the way you might expect.

The spectrum of skill on the Pro Tour has traditionally been pretty wide (although I suspect the new qualifier system will raise the floor), but the top end is always “the best active players in the world”. Those participants at the high end have been working on Standard for a while, and probably “discovered” Spell Queller as early as anyone else. As a result, it is not crazy to suspect that these players have found the best decks for beating things like Bant Company (what I suspect is probably the best Spell Queller deck, just because it makes the best use of its other resources). Furthermore, these players are disincentivized from playing in early events like Opens because the maximum payout is so severely less than at the Pro Tour, while simultaneously giving all the other PT participants valuable information a week early.

All that holding true, it’s safe to say that the best players at the Pro Tour will only be playing a deck like Bant Company if either of the following are correct:

It’s important to remember that that’s only regarding a very narrow band of the PT participants. There are still going to be people there who are not on world-class teams or have spent a month in a beach house tuning various strategies. There was a sentiment once that you had to be able to beat the Red Deck at a Pro Tour, but only on Day 1- I suspect that the players who would otherwise be playing Red will bring Bant Company this time. The players with the least preparation and connections will play what they deem to be the de facto best deck, since it is proactive and offers a clear and coherent strategy (whether they realize that or not). Then, there is the larger contingent of players in the middle (the “Jimmy Eat World” subset, if you will). These are the players who would be more likely to bring a deck like Bant Company in the first place. Some of them will likely hit on the next level strategy (“what beats Bant?”), but without quality team infrastructure, likely won’t get much higher on the archetype chain than that.

Unless a lot of really famous Magic players have ugly Day 1 Drafts, expect to see a lot of Languish on Day 2. Remember that the “breakout” GB strategy of the last format premiered in the hands of Jon Finkel (a deck that was never quite as good after that weekend, but for Jon it didn’t really have to be).

The only other strategy that I’m keeping my eyes peeled for is some form of Cryptolith Rite.dec. That’s another deck that didn’t show up until PT:SOI, but had much stronger legs going into the rest of the Standard season. The reason I suspect we didn’t see it any yet is that the Rites strategies all require a significant amount of tuning in the deck construction process (especially in the versions with multiple other colors). While most people playing in the Opens didn’t have the time to commit to developing a new Rites deck, people like Matt Nass (the deck’s originator) certainly did. It’s possible that some version of the deck shows up and plays spoiler this weekend, but I suspect that most of what is good against Bant Company is also good against any of the Rite decks.

Look for GB and UB control to be popular on Day 2.

The Left Behind: If I asked you to name the five most expensive cards in Khans of Tarkir, you’d probably settle pretty quickly on the five fetchlands (you’d be correct). Now, assuming we lumped that cycle together as one card, could you name the rest of the top three? The answer stunned me when I saw it. Sorin, Solemn Visitor at ~$6.50, followed by Clever Impersonator at ~$3.25. Beyond Clever Impersonator, every remaining rare or mythic in KTK costs less than $3. In fact, the majority of the rares in the set can be obtained for fewer than 100 Puca Points.

Fate Reforged hasn’t fared much better. The only two cards that clear the $3 mark are Ugin, the Spirit Dragon and Monastery Mentor. Soulfire Grand Master and Tasigur, the Golden Fang (in that order) hover just below $3, while every other rare and mythic are half as much or less.

My immediate thought is that you should look to get your Monastery Mentors right now. Ugin is good in situational spots, but Mentor is a named strategy in Legacy and Vintage. Now that these sets are out of Standard, their pricing models are beginning to resemble Dragon’s Maze- making Mentor the closest corollary to Voice of Resurgence. My second thought is that the heavy supply, matched with a lack of overall larger application, is going to be crushing a lot of card values after rotation. This is a good chance to buy in if you think something has a good shot long term, but know that pretty much anything that doesn’t have a home will crash.

Journey into Nyx actually did pretty well, with 8 cards clearing the $3 threshold (including Godsend?!), and the gods pretty much ended up propping up that entire block. I suspect KTK, Origins, and the Battle for Zendikar block won’t do as well. This really could just be another aspect of the new world we are living in.

UPDATE: So Standard at PT:EMN started around 1am EST. James has a great write-up of what’s happened so far, so make sure you follow him for the rest of the event. Looks like Emrakul is back!