I don’t care if you’re tired of Smuggler’s Copter jokes. It needs to be done and I have to give a terrible apology if you hear the title in an Ahnuld accent.

So we missed the boat on the Copter. It’s $18 for an in-print Standard rare at week one, and while I know that the price is going to go down, how far can it go?

The answer is, pretty far. I want to examine some rares, not mythics, to see how far we can expect the Copter to fall.

Let’s start with Shadows over Innistrad, and look for commonly played rares. We aren’t going to look at Eldritch Moon, since that’s a small set and I want to compare apples to apples. 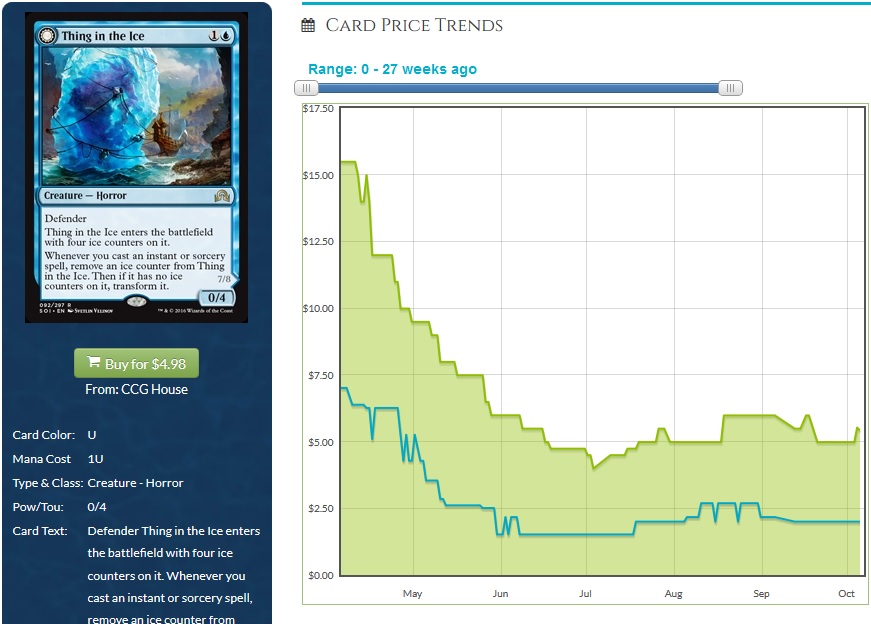 One of the first rares to burst onto the scene, and one whose preorder price kept climbing upward, was Thing in the Ice. Since this has come out, it’s seen some play but not a lot, rarely being the centerpiece of a deck.

Yes, it was above $15 at one point at the beginning! The lack of play lowered the price, and then there was a time not too long ago where Blue-Red Thermo-Thing was popular, and that is why the buylist price bumped up a little.

But yikes. Fifteen bucks down to five, that’s a big loss…though the card isn’t terribly popular.

Let’s look at something that often got played alongside Copter: Declaration in Stone. 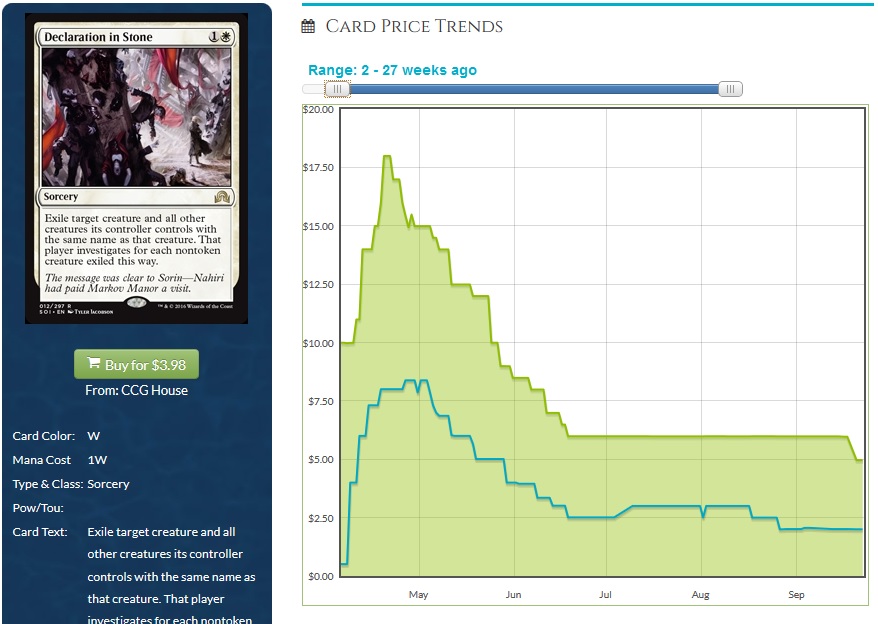 Two mana, exile a creature, and there are drawbacks in the form of Clues. Cheap, efficient, and powerful, and played a lot, though not as much as the Copter.

Even so, it’s gone from a high of $17 down to its current plateau of $4. It’s got Kaladesh and three more sets before it’s out of Standard, so there’s room for it to fall more or perhaps to creep upward. As a rare, there are a whole ton of these out there and that’s why the price has fallen has far as this. Removal this good should hold a price, and it’s actually not the usual thing for a rare to hold a price above that of a booster pack.

Shadows over Innistrad has three: Thing in the Ice, Declaration in Stone, and Tireless Tracker.

Maybe what we should also do is look at Battle for Zendikar, because that has Expeditions to goose people to buy more packs. The data doesn’t lie, either: it’s very difficult for rares to keep value. From Battle for Zendikar, the only rares over $3 are lands: Cinder Glade, Prairie Stream, and Shambling Vent.

My point is that the price on the Copter, and a lot of other rares, are about to start dropping as Kaladesh gets opened in earnest. There’s a big Limited Grand Prix this weekend, and that’s going to be a huge injection of supply into the market.

If you’re hellbent on playing Standard this weekend or next, you can go ahead and buy your playset for $70 or so, and play it for quite a while. It’s possible–possible!–that the Pro Tour next weekend spikes it even farther, but I can’t even remember the last $20 rare we had in Standard.

It’s going to be fascinating to watch.

Think of it like Aether Hub. Sure, it’s a four-of all over the place, and it’s a good card, but people, it is an uncommon. An in-print uncommon has an eBay price of $9-$10 a playset!

This first weekend of prices is crazy. The play is heavily to sell. SELL. You can buylist the Copter, a rare, for $9. You can get $10 for Gideon, Ally of Zendikar, and that’s a four-of mythic.

I’m trying very hard to bring up all the evidence that I can to convince you that if you’re buying a Copter right now, it’s to play it for the next 18 months. Please don’t buy it now, hoping it goes up more. Don’t chase the tail end of this. Wait. Be patient. The prices will drop, and you’ll lose money if you buy now and hope to sell the Saturday of the PT.