I mean, I was allowed to; my series on Gathering Magic gives me the opportunity to spoil EDH-relevant cards every once in a while and since writers like some lead time, we get to see the cards pretty early. That’s not always a good thing – we know information we can’t (ethically) talk about. It sucks. The card I saw may or may not have some financial relevance, and it may or may not easily inform a series of pretty prescient finance articles. The thing is, I don’t want this to be the last time I see a preview card (when you spoil a card, it’s a “preview” and when someone else previews a card, it’s a “spoiler”) so that means I have to write an article that is not only not inspired by seeing the card (difficult) I have to write an article that doesn’t even look influenced by that card in hindsight (difficulter).

In order to avoid giving the indication that I leveraged my knowledge of the future to somehow write a better article that anyone can read for free but no one does I decided to go back to some of the cards we thought might go up based on Commander 2015 and see how they’re doing a year later. That can help us out quite a bit moving forward. Looking at cards we expected to interact with the cards in the decks and seeing which of them went up as well as seeing how the reprints recovered should give us a lot of info. This will be a two-parter which is perfect because the next article will be published the day before we’re allowed to talk about spoilers so I have to come up with two weeks’ worth of stuff to talk about before we can delve into getting every C16 card spoiled within a 48 hour period because instead of spacing stuff out, they decided to “let [us] enjoy Kaladesh” whatever the $#% that means.

So let’s take a look at the stuff from last year. Maybe I changed my mind on some of it. Maybe I nailed a few cards that ended up getting reprinted (I totally did, actually) and it might be good to see if they’re a good pickup right now. Let’s see what a difference a year makes.

We were trying to guess two things – the $20ish card that would be in the decks to help them sell and a few good reprint candidates that would tank and go back up if they were reprinted. They seem to have figured things out and rather than have a big $20ish card in these decks they have a lot of $8ish cards, which is amazing. Commander 2016 promises the same sort of concept. Reading through this article again, a few things pop out at me. 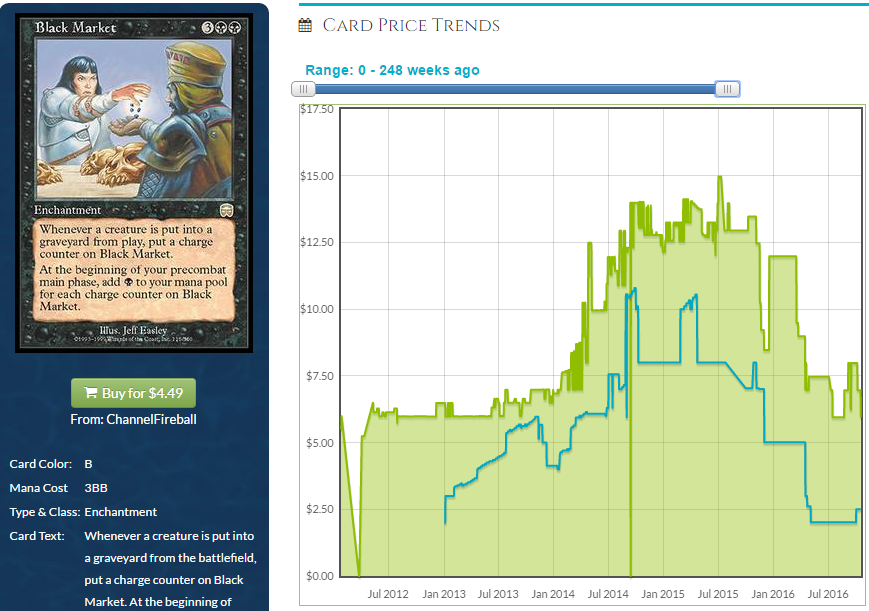 There aren’t too many cards I’m more confident about than this one. I won’t belabor the point I made two articles ago about how well this lines up with what happened with Crypt Ghast, the point is made and a lot of people seem to agree. Some reprints, rather than ruining the card forever, give people an opportunity to get the card for very cheap for about a year and then make money as it goes back up to where it was. When we see which cards are reprinted in Commander 2016, how do we identify which cards are the next Black Market?

We’ll see in a year if we were right, but I expect Black Market and a few other cards like High Market to recover as nicely. Basically the Markets.

Phyrexian Altar was $15 when I printed that article, calling it a good candidate for a reprinting. It dodged this reprinting. Phyrexian Altar was a card I picked out due to its price and how good it would be if we got a lot of graveyardy stuff in Commander 2015. We did and even though it would have gone gangbusters in the deck with Meren, we didn’t see another printing. What happened to that $15 pricetag in the last year? 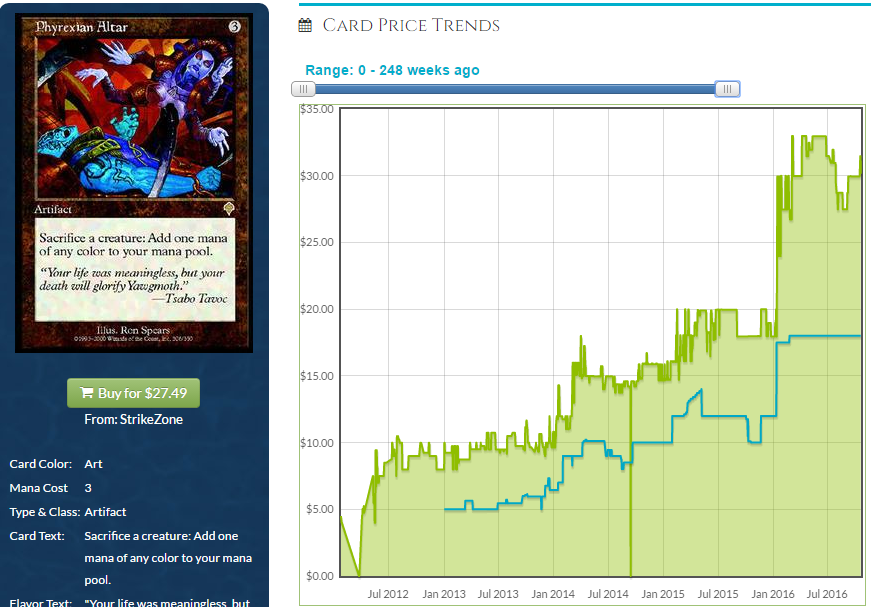 Well, it gained about $10 and is on its way up some more. Once it dodged that reprinting, I swooped in and grabbed a few copies. Everything I said about it being a good fit for the set was true. It would have been a very good reprint and WotC honestly punted pretty badly by not including it. The card is just about out of peoples’ price range at this point, but the card is too good in Meren.

Now, they worked on this set a year ago when the card was $15 and there is a non-zero chance that this gets a Commander 2016 reprint. If it doesn’t, expect more growth, though not like we saw from a year ago until now. Instead of gambling on how much we can make if Altar dodges another reprint it desperately needs, we can look at cards that look like Altar used to. When we have decklists or I can talk about cards from Commander 2016, we’ll work on identifying cards that are about to shoot up based on dodging a reprint they needed, but off the top of my head, if we don’t see Chromatic Lantern and/or Coalition Relic, we’ll want to look at those and I don’t think the Masterpiece Lantern can do anything to attenuate the growth of Lantern I expect to see. These cards are obvious in hindsight like Altar is, but considering we managed to call Altar months early, we were in a position to make some money, some of us did, and we’ll all be ready this next time. Anything in the $10-$15 range that is a glaring omission from Commander 2016 and pairs well with a popular new commander is a great candidate for growing like Altar did. Even the recency of Relic and Lantern can’t hold back the tide of demand. 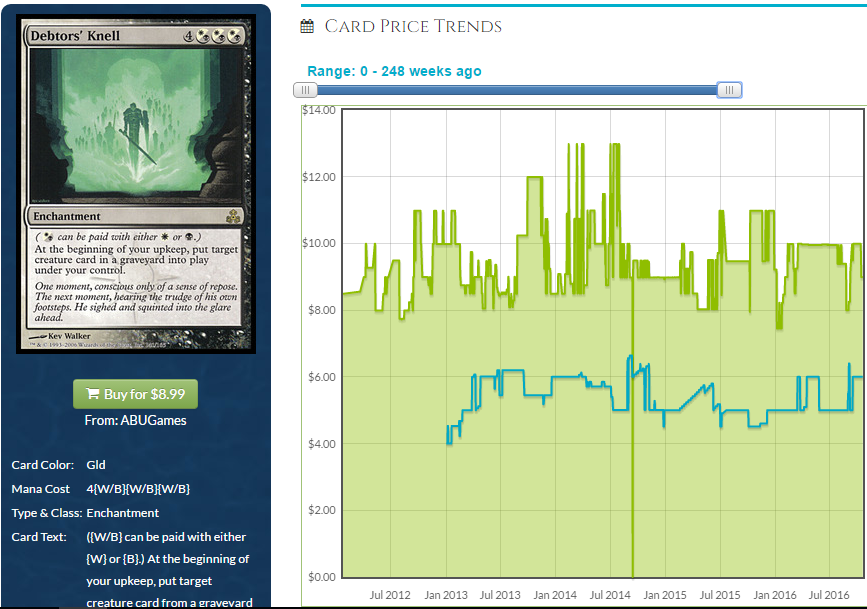 Even cards that didn’t seem like big, dumb, obvious inclusions in any deck that came out of the last 12 months experienced some solid growth. Knell quietly went from $7 to $9 despite no real sea-change in its adoption. It’s just a solid EDH card from a set over a decade ago and from what I can tell, this grew on the basis of the health of the format rather than anything about it that changed. It got a year older, didn’t become obsolete (and it’s hard for EDH cards to become obsolete – Grave Pact wasn’t made obsolete by Dictate of Erebos – people just play both) and just rode the wave of a healthy format. Cards from around the same time period will probably just creep up if they’re not reprinted. What will Privileged Position look like in a year? Coldsnap cards used in EDH likely go up whether they get more use or not. More on that later.

We didn’t know this at the time, but the Green/Black deck ended up being the best seller, though it wasn’t as profound as in years past when there was literal 0 reason for financiers to buy decks that weren’t Nekusar, Daretti and Nahiri. Now the decks are selling pretty evenly because they’re all pretty good and the value is spread out nicely. Basically all of the decks had a new card that was $8-$10 which is much better than having four decks with 0 $10 new cards in them and one deck with a $50 card and, what the hell, the best commander and, what the hell, a Legacy staple. WotC put all of its $%&^ in a backpack so that it’s all together and they used this new policy on Commander 2015. I can only hope their $%^& wasn’t scattered to the four winds when they made Commander 2016. 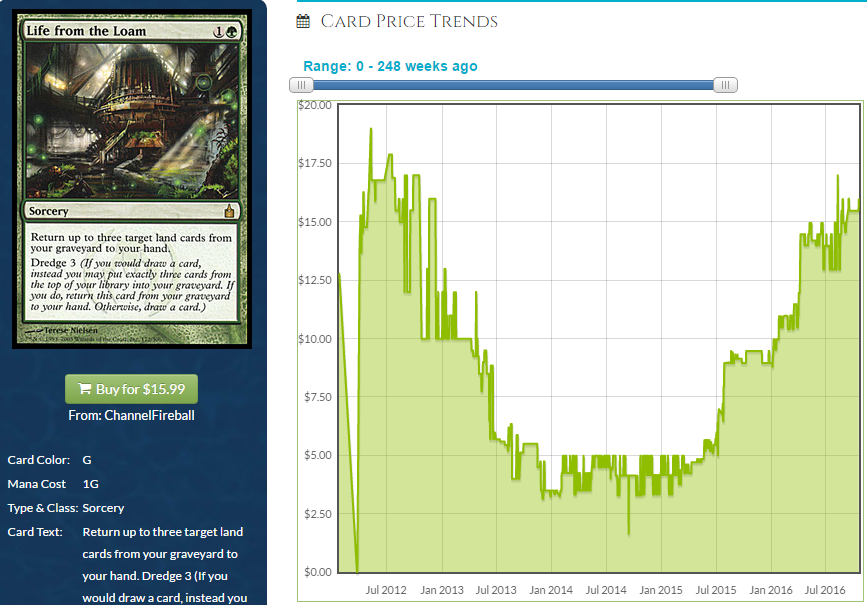 We predicted that Life from the Loam was a good card, and that’s about it. It didn’t end up interacting with anything from Meren’s deck but it ended up not mattering because The Gitrog Monster came out of nowhere. Can this teach us anything? I guess that when cards are low after a reprinting but they are applicable in multiple formats, it’s a good idea to always buy when they crater. You never know if it will be a Modern deck, SCG deciding to run Legacy events again or a reprinting of a new general in a booster pack set but odds are good something will make it go up. Life from the Loam was a solid reprint choice at around $8 but it was also a solid pickup at that price given how many times it’s been over $10 in its life. This is one of those U-shaped graphs that makes you look at every reverse-J-shaped graph with suspicion. 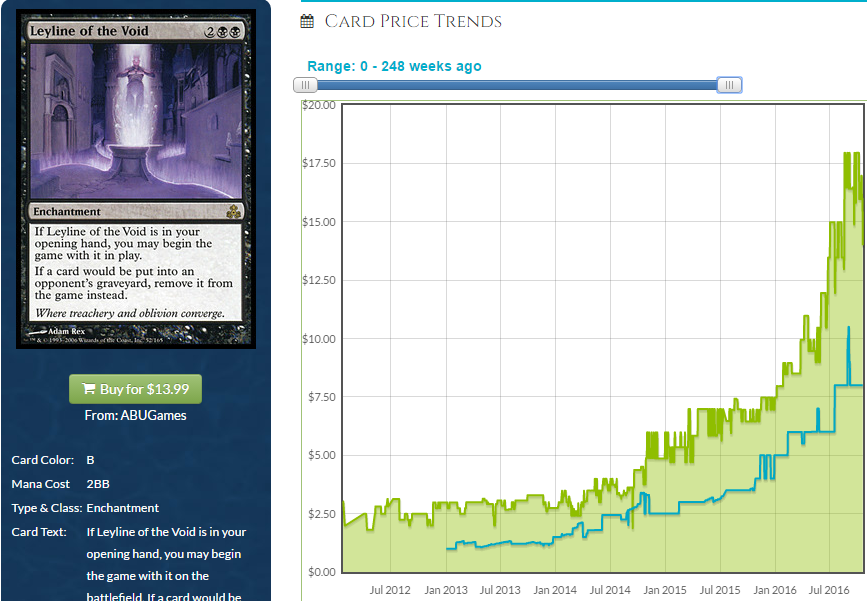 Regular-J-shaped graphs can tell us a lot, too. There was no reason for Leyline of the Void to go down, so it never did. It continued to be dumb, got farther away from its reprint date and in general, when it didn’t get reprinted in the last year, was a great candidate for this kind of continued growth. Did anyone buy in a year ago when this had the same slope and cost half as much? Anything we identify this year as interacting with the stuff in Commander 2016 that has a graph this shape is just a good candidate. This card outperformed my 401K and it was easy to identify a year ago. When we’re handed gifts like this, we should appreciate them.

We’ll take a look at the other three decks next week. I’m bursting to tell people about what little I know about Commander 2016, but by the time I can, you’ll know as much as I do. Until then, we can look at the predictions we made in 2015 and how they panned out. So far we have identified quite a few trends that we can apply to a new set of cards to predict their growth. Sometimes it really is that easy, especially if it’s a card like Debtors’ Knell that just went up because why not? Next week we’ll tackle the rest of last year’s predictions and see if we can identify anything else that can help us figure out what to pick up in the wake of Commander 2016. I’d offer to summarize them but I like making you nerds have to read. Until next week!

2 thoughts on “The Difference a Year Makes”