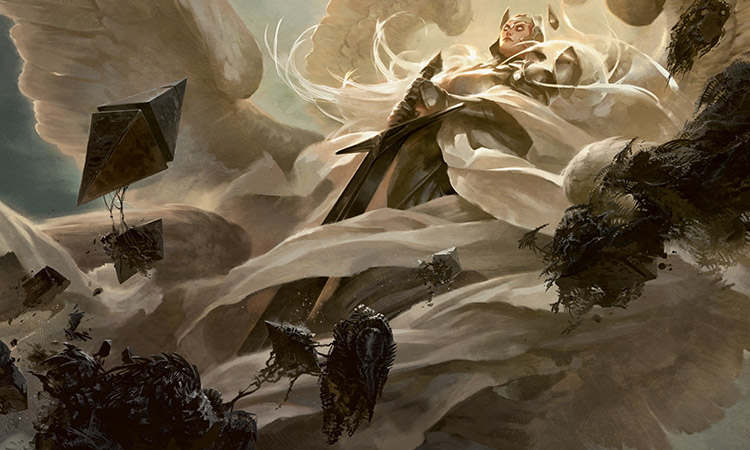 This year, we’ve had a tremendous number of cards reprinted.

August: From the Vault: Lore

This doesn’t count the reprints in regular sets or the Masterpieces in Kaladesh. Also, the Standard Showdown packs are adding to the numbers of cards in circulation.

Take a moment and think about this list. Every card you have, every card you purchase, runs the risk of a reprint. I’ve talked before about how hesitant I am to speculate on a large quantity of cards because the reprint train is never stopping.

We already know that next year has another round of Modern Masters in March, as well as a Commander anthology in June. The only truly safe cards are those on the Reserved List, and it doesn’t matter if you agree with the philosophy, it’s one they are sticking to.

I also admit that I’ve totally given up on predicting what they will do when it comes to reprints. Putting Iona, Shield of Emeria in both the FTV and the Modern Masters last summer is a move that perplexes me beyond anything else.

At the same time, we are back to one rotation per year, which conversely makes Standard a lot more appealing for speculative purposes.

So what’s an aware, educated Magic financier to do?

Everyone who’s tried to make money off this game has their horror stories and a box full of cards that should have paid off but never did. I don’t want to highlight anyone else’s misses, though I can think of them. I confess to owning more than 50 Prophet of Kruphix, though.

If you have a spare playset or two of a card, your exposure is limited. If you want to go crazy deep and pick up a couple hundred copies, you’re putting a lot of money at risk, especially if it’s a card that might get reprinted.

Long-term holds are basically crapshoots. I traded for thirty copies of Thespian’s Stage when it was new and less than a dollar, and I had to dodge a reprint in every casual-oriented set for it to get to the $3 it’s at now. Believe me, I had confidence in the long-term appeal of the card, but I also knew how easily it would be added to just about anything.

Rule #2: Foils When Possible, Except in Standard

It’s a truism that Standard foils are a trap. Standard players don’t generally feel the need to foil out a deck as often as Cube, Commander, Modern, or Legacy players do.

If you think a card is going to have appeal in non-Standard formats, and you’re willing to get in at a higher number, then foils are far safer. It’s not a guarantee, not at all, but it’s harder to print foil versions. On the list above, only Eternal Masters and Conspiracy 2 had foil versions of cards, and the From the Vault foiling is so unpretty that many collector-players stay away.

Here’s the caveat, though: future Masterpiece sets are a dark cloud hanging over future prices. We’ve had lands, and we currently have artifacts. This leaves us creatures, spells, and enchantments. Perhaps one set will be instants, and another sorceries. Wouldn’t be surprising.

Rule #3: Be Prepared to Lose

This is perhaps the most important rule when it comes to reprints. Sometimes, you’re going to get hit. Even when your card starts to show signs of growing, something happens and it stays worthless.

Accept this. It’s going to happen. It’s not just about a missed spec, it’s something that could have been amazing but instead it’s just cardboard that you can’t even light on fire effectively.

(pause to look at my stack of Prophets and sigh)

If you’re going to play this aspect of Magic: the Gathering, you have to be prepared to not just be wrong. That’s bad enough. You have to be ready for your card to start to take off and then circumstances change and your card craters.

Imagine having a stack of Ruinous Path, and then in Shadows over Innistrad, they decided to reprint Hero’s Downfall. That’s a gut punch right in the wallet. Strictly better reprints are rare, as are emergency bannings, but they are factors you have to be ready for.