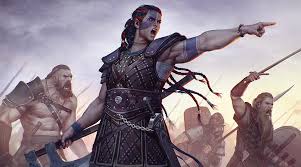 Not the most popular, but still popular. The fourth most popular this week and fifth most popular this month per EDHREC. That would seem to indicate popularity is increasing as more and more people buy the Commander 2016 decks and start building with them. While it’s no Atraxa, the third most popular deck of all time per EDHREC, it’s still trending in the right direction. We’re of course talking about Saskia, the commander I left for last because, frankly, so much of what’s in the deck comes in the precon. As people start to build a bit more and add some unique cards and that tech catches on, we’ll see stuff emerge. We’re sort of stuck scouring decklists for clues rather than just checking the main EDHREC page because it’s currently lousy with cards from the precon. Rightfully so – we have discussed the precon effect in this series before and I’m sure we’ll have to do it again. Basically, if a card doesn’t look terrible enough to cut, people will favor leaving it in over taking it out because there is some small, intended amount of synergy there and they don’t have to buy a new card that way. It will take a minute for new old cards to shove old new cards out of those slots.

Saskia is a pretty brutal commander, though, and the stuff that he makes happen ends games quickly. Even though the decks being built are skewed toward precon contents much more than the other four decks which we’ve already covered and that’s why I handled this last and gave it another week for more data, there’s still stuff that’s going to move. How could it not with such a popular deck? It’s more popular this year than The Gitrog Monster and Leovold both. Could it be because the deck comes mostly built? Or are people that jazzed about four color commanders? Either way, let’s look at what we can look at. 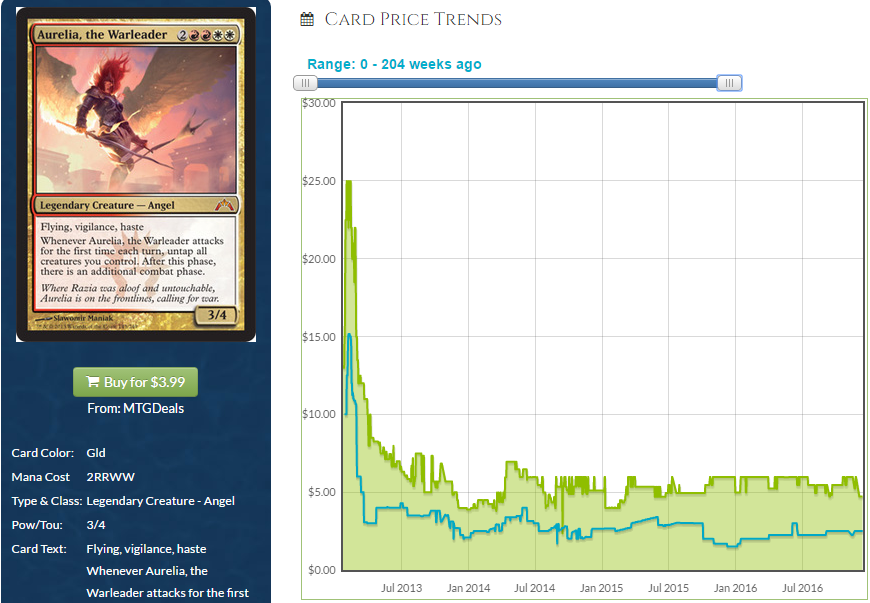 Right off the bat we see a card that was reprinted in an FTV that didn’t do much of anything to its price and has been laying dormant for a while. Waiting. Biding its time. I think the time is now. This is mythic, it’s an angel, it’s at its historic low and it just happens to straight wreck the game coupled with Saskia and the other cards in the deck. Pair this with Eldrazi Displacer to ruin everyone’s day or just get one extra attack phase which can translate to quadruple damage if you hit the player you targeted with Saskia. Good luck not straight murdering someone. Tap their team down with Naya Charm and take them to pound town. They’ll think they live in whatever town the Pound Puppies was set in, they’ll be so pounded. Did they ever actually specify where the pound that the Pound Puppies lived was located? Or didn’t it ever matter because they’re puppies and they have no way of actually knowing where they live because they’re in a pound? And are also puppies? Did you know Frank Welker and Peter Cullen from Transformers did voices on that show? Nancy Cartwright from The Simpsons, too. Lotta voice talent on the Pound Puppies, even if it was a depressing as shit show about puppies essentially on death row. Did they ever get out of the pound? Like, get adopted or something? I never watched Pound Puppies, I was like 2 in 1986. What was I talking about? Oh, Aurelia. Yeah, buy this card. It’s time. 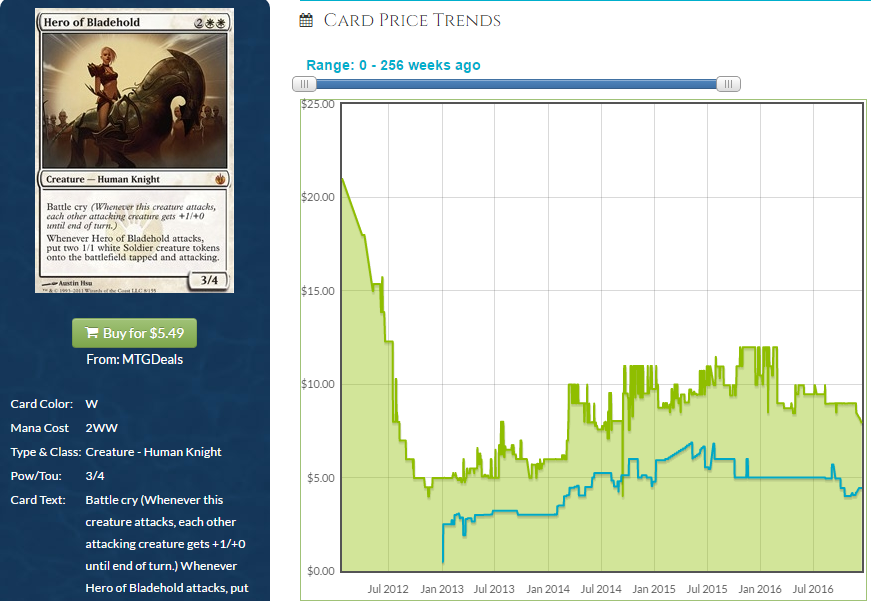 This isn’t quite at its historic low but it’s below its recent high. Could Modern help this card? Certainly. Is a reprint all that likely? At its price point, it’s doubtful…ish. I still think Commander 2017 will have ally-color, two-tone decks and GW tokens seems like it’s pretty likely. How much will this go up in a year? I don’t know, but Irelia and Iroas decks love to run this and Iroas just got reprinted meaning anyone who wants a cheap copy of their commander to build a deck in the worst color combination in all of EDH is welcome to it. I think Saskia decks should jam this more often than they are. If they start to, this is a good pickup under $7 but I don’t like paying much more than that. 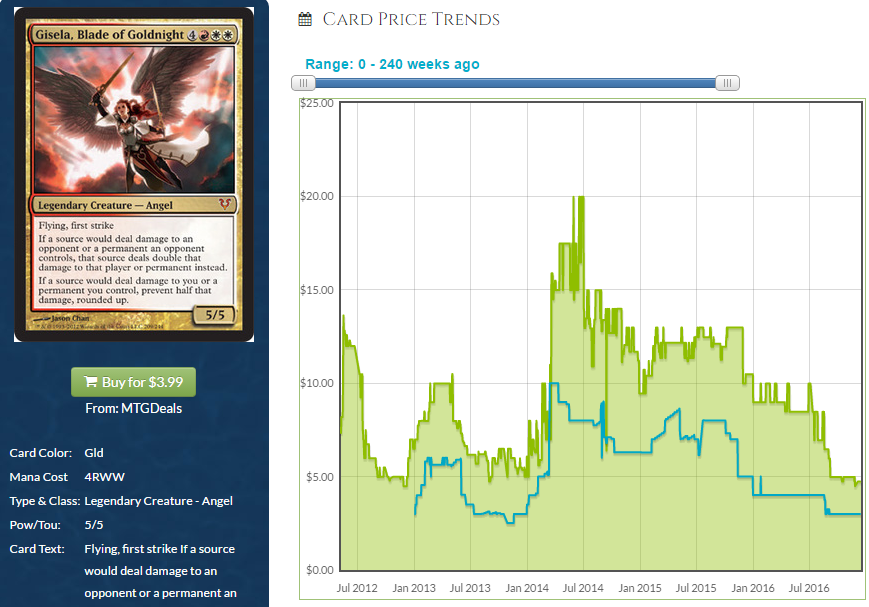 Basically everything we said about Aurelia is true here, except Gisela managed to dodge the FTV printing. This is basically at a historic low not having fully recovered from the Commander 2015 printing, but with a Commander 2017 printing not all that likely, this is probably the time to buy in. This card is nuts in decks like Saskia and since it’s a mythic angel on top of being a card that is seeing a resurgence in its utility, this seems like a slam dunk. This flirted with $20 historically so I don’t think it’s out of order to suggest you could buy this at $4 and expect it to hit $10 before you cash out. 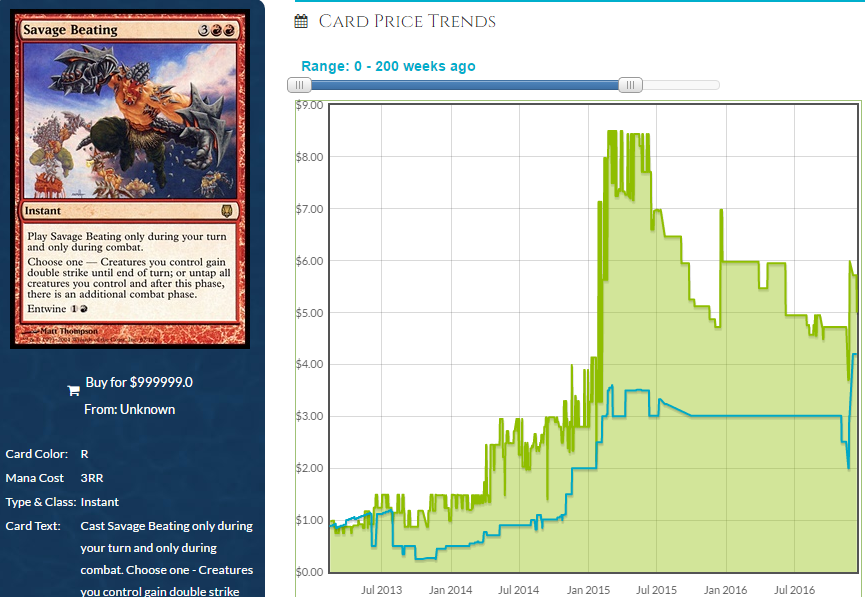 Next up in our “How the hell did this dodge a reprint?” series we have Savage Beating, a very aptly named card. This IS a savage beating and if you are attacking the person you targeted with Saskia, you probably just murder them. I wish I could run 4 Naya Charm in the deck and always be cilling people, but even if they have blockers, giving them double strike and coming back through for a second wave of the beatfaces is probably going to crumple even the most robust of defenses. Commander 2016 and this deck specifically would have been the perfect venue to reprint this card and since they didn’t, we’re forced to ask ourselves where they could reprint this at this point. There are a lot of variants on this card, which means it is shielded from reprint slightly because another variant could be reprinted instead. In fact, at $10, Aggravated Assault seems like a juicier reprint target than Savage Beating.

What I like best about Savage Beating is that it’s a second spike. Really, all of the Relentless Assault variants are. When Narset was printed, everyone wanted to rip these effects off of the top and get infinite attack phases and hella value. They are starting to return to “normal” now that demand has cooled a bit, but I don’t think many people who built a Narset deck are going to take it apart so this new demand needs new supply. Since there are fewer loose copies of Savage Beating to come in and plug the holes in supply at the low end (meaning they are introduced into the market for their buylist price by people who had them in a binder rather than sold to the end user at retail) the price is bound to go up as the cheapest copies start to disappear and are replaced by slightly more expensive copies. I think this card has a lot going for it but Saskia’s price spikes are lagging behind Atraxa and Breya, meaning there is time to get copies but also time to second guess yourself. Do the former but not the latter – Saskia is increasing in popularity as more and more people open these decks. 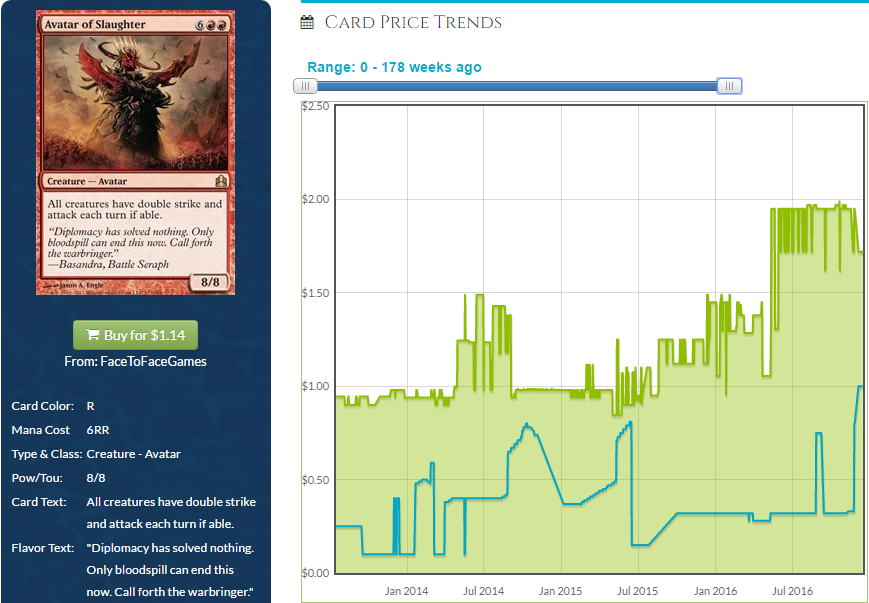 This card has so much going for it, it’s not even funny. Everything about the shape of this graph should be making you salivate right now. Actually, that part’s pretty funny; imagining you salivating over a Magic card like a cartoon wolf staring at a prey animal/cartoon woman’s jugs. It’s just cardboard, settle down. Should we go into everything this card has going for it? Okey dokey.

This was first and only printed in the original Commander set. That means supply is pretty low and is a lot lower than anyone really thinks. This is going to see a few more copies printed in the Commander Anthology set, but that’s not going to really introduce that many copies into the market because no one is paying $160 or whatever for Commander Anthology just to bust all the decks apart and sell them off piecemeal. People who buy that product are buying it to play with or collect. Supply is and will likely remain low for the foreseeable future.

The shape of the graph is incredibly encouraging. Not only is the retail price starting to finally take off, the buylist price is moving along with it. Dealers are selling out at the current price and they are expressing their confidence in it selling out at a higher price. Dealer confidence is good because it’s endorsement of your pick by someone who does this for a living.

This is just about the EDH-iest card ever printed and it’s pretty nutty in Saskia decks, though currently it’s more likely to be run in Kynaios and Tiro decks. Casual players love that it’s a big, dumb avatar, competitive players love that it doesn’t let your opponent have blockers and dealers seem to be loving that they’re selling out. It’s in a great place and I think you’re pretty safe buying this. 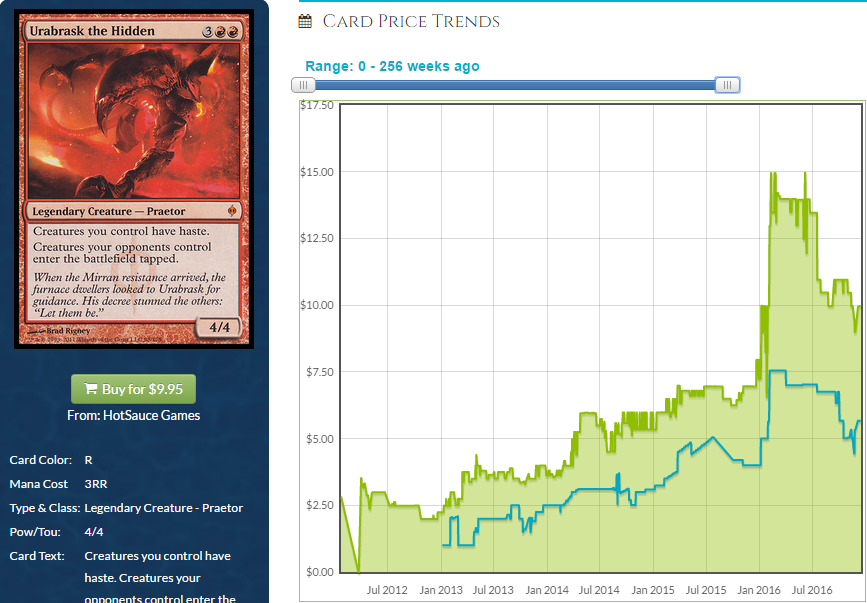 If there is a theme to this article, it’s “Cards that dodged a reprint somehow” and the next installment is a card that managed to not get printed alongside Elesh Norn. This recently spiked and with new demand from a deck like Saskia that absolutely loves your opponent not being able to play creatures to block with and wants your creatures to have haste. Urabrask is kind of tricky to reprint but at its price point, it might be a good inclusion in Commander 2017 since it’s not too expensive but is a fun, splashy mythic. I think this can at least get up to its recent peak of $15ish before that happens, though. Urabrask is a shoo-in for a deck like this and will continue to impact a lot of EDH decks until it’s reprinted or prohibitively-expensive, whichever comes first. Modern has a non-zero chance of coming along and randomly spiking this, also.

Saskia is taking a bit longer than Atraxa or Breya to spike cards but that’s OK because it just means we have more time to pick up the stuff we want to pick up. Pay attention to what people are building with on EDHREC and don’t be afraid to go into a few decklists by clicking on the links at the top and seeing if there is any original tech in there. Cards from Mirage block don’t need much of a push to go off, for example. You make money by being ahead of price increases, so stay sharp and be ready to sell when others want to buy. I just jammed all of these decks on an Amazon wishlist so I expect to get them for Christmas and I imagine there are a lot of people out there just like me. Cards aren’t even close to being done spiking, so keep an eye out for the next card to go up instead of worrying about what spiked already. Until next week!