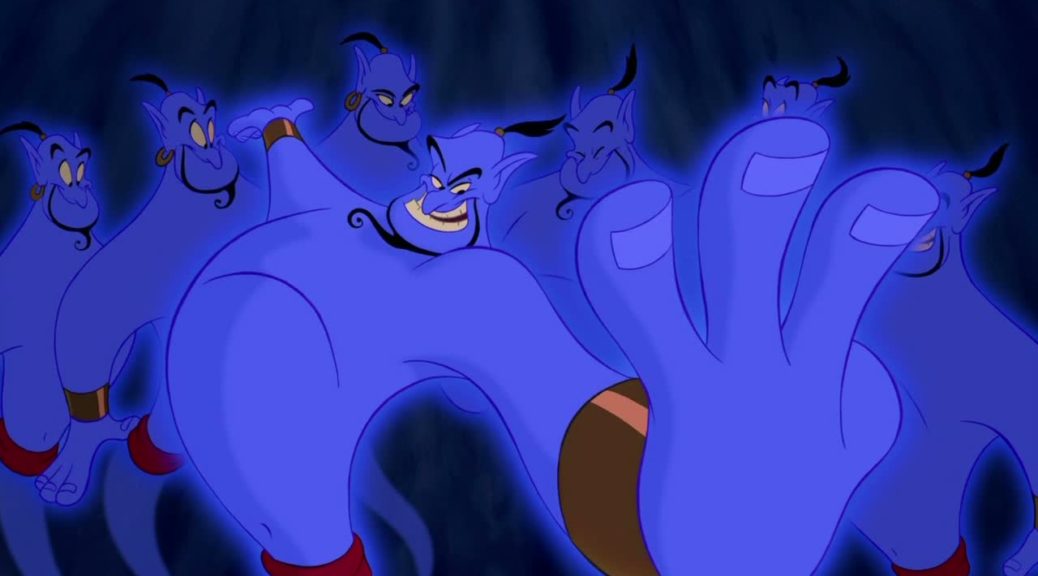 Three Magic players, a Vintage player, a Frontier player and an EDH player, were walking around the back of a convention hall and they found an old bottle in a trash can. They opened it and a genie appeared and said “For freeing me, I will grant each of you a wish.” The Frontier player said “I want to be in Canada with all of my Frontier playing buddies having a huge Frontier tournament.” The genie nodded and the Frontier player and all of his friends disappeared and they played a big, dumb Frontier tournament between the Japanese and Canadians. The Vintage player said “I want a big Vintage tournament with a Lotus as the prize.” The genie said “I can’t do that. Best I can do is a store tournament with a $10 buy-in and unlimited proxies. You’ll probably lose in the first round to someone who has never played Vintage before and made his deck on the back of basic lands with a Sharpie.” The Vintage player said “Are you kidding? That sounds amazing! That’s better than we normally get!” and the genie nodded and the Vintage player and all of his friends disappeared to play in a store tournament with, like, a foil Brainstorm from Conspiracy or some BS as first prize. The EDH player said “So, wait, all of the Frontier and Vintage players are completely gone from this tournament hall?” and the genie said “Yes, that is correct.” The EDH player thought a minute and then said “I wish for a pack of Dragon Shields.”

The rule of three is an important component of joke construction. You know, old-timey joke construction. Back when comics all wore bow ties and told street jokes. A lot of street jokes follow that same rule of three setup – the first two establish the rules and the third example breaks the rule for comedic effect. There’s also some weird rule of three thing for math that probably has to do with triangles or some garbage. I don’t know, I did trigonometry in middle school like everyone else. The point is, I spent a lot of time googling “rule of three” and trying to find a suitable street joke instead of starting this article right away and I didn’t even end up using one I found, I just changed that joke about minorities from The Boondock Saints to make it less racist but more offensive to nerds. There’s another rule of three for Magic, though. It involves cards with a CMC of three and it’s not a rule and I really just want to talk about Trophy Mage this week and this is my column so you can’t stop me. Why do I want to talk about Trophy Mage? I think Trophy Mage, and 3 CMC cards in general, are going to be pretty important when Aether Revolt comes out and I want to be ready. 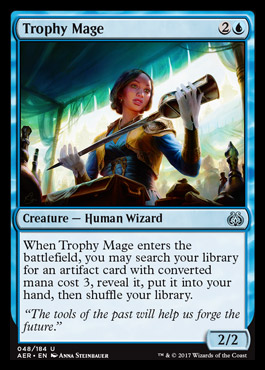 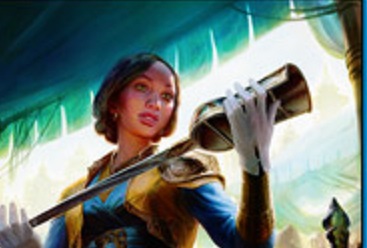 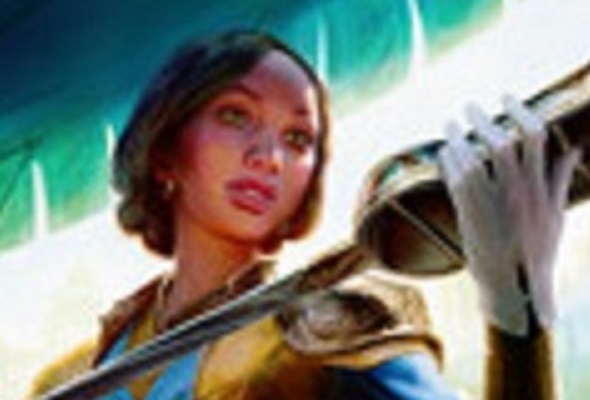 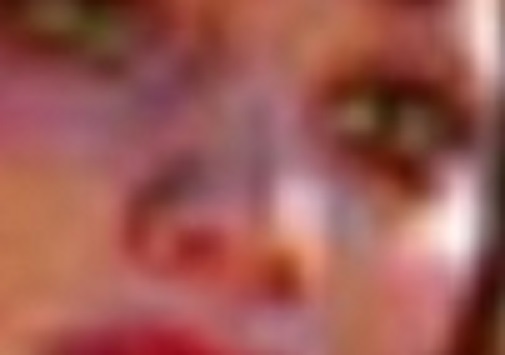 Here’s the part you really need to look at.

That’s a sexy text box. A “sext box” if you will. Also, even if you won’t because, and I can’t stress this enough, this is my column. I make you people enough money that you will look at a nostril or a text box if I say so and you’ll start saying good cards have “sext boxes” because I made you a lot of money on Squandered Resources or whatever. Do you doubt that we should be looking at 3 CMC stuff? I have a few more reasons to believe we should be.

Yahenni’s Expertise references cards with CMC 3 or less as a bonus to playing this 4 CMC spell. I am sure CMC will matter in this set since multiple cards reference it (Scrap Trawler being another) but with multiple cards referencing 3 specifically and Trophy Mage looking like a pretty saucy tutor (People play Trinket Mage in EDH and that gets like 3 relevant cards), I want to look at the 3 CMC artifacts that are easier to tutor for and which ones could have some upside. I also want to get a jump on thinking about CMC stuff in EDH before Aether Revolt gets spoiled any more. 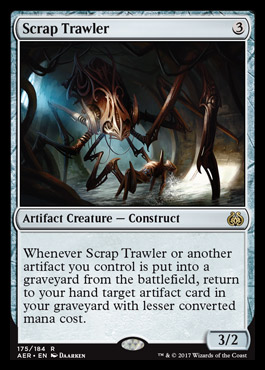 Scrap Trawler probably gets its own, entire article at some point. EDH moves very slowly so we can pencil it in for next week or even 2017, frankly. Make no mistake, though, Trawler is going to buoy some prices for real. It’s got a ton of combo potential, and it existing in a format with cards like Goblin Welder means there are likely a ton of shenanigans possible. Junk Diver is an important card and this is way better since you can sac any artifact to get the party started as long as Trawler is in play. Give me a week or two to really good deep on implications of this card and we’ll have a sweet purchase party with all of the money you’re going to get for Christmas and Hanukkah or Festivus or whatever. 2017 is going to be a much better year than 2016 so why not invest in it? We’ll come back to Trawler soon enough, and by that I mean “weeks before the prices actually start to move.”

What do I like in the “3 drop artifact” category?

I almost want to keep a running list of every card I looked at and discarded as a potential spec after deciding there wasn’t anything to be gained from buying based on its current pricing trends. I did a gatherer search for 3 CMC artifacts and there are a ton of targets but a lot of them have a big, glaring reason not to buy in. If you think of a 3 CMC card and think “Why not this one?” there is likely a reason that I thought was compelling. I’m not saying don’t ask me to explain my logic, but I am saying I don’t want to read comments that imply I’m too dumb to think Basalt Monolith is worth talking about as opposed to me looking at it and ruling it out. We’re talking about specs, not cards that are good in EDH that you can grab with Trophy Mage. Who cares how good a card is if it’s $1 and is going to get reprinted every 2 years until it’s powder? 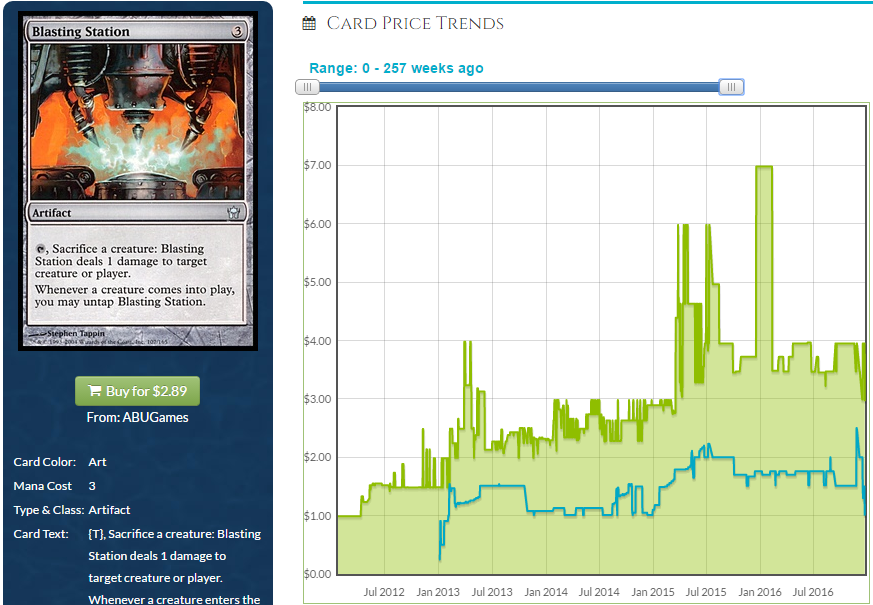 This hasn’t been blasted by reprints, ground into powder or… summoned too much… by reprints. Anyway, this is a combo piece that works insanely well with Scrap Trawler specifically. This can kill people if you have ways to make tokens, etc. I don’t need to tell you how good this card is and how it’s an important piece of murder combos. Being able to tutor for it might not give it upside, but it might and this card looks healthy regardless. It could be reprinted conceivably, but they have skipped a lot of good opportunities to do so and this could easily hit $5 in a year or two with no increased play. I think it will see increased play, though, so we don’t need to look far to see Fifth Dawn uncommons that can tell use how high this could go. 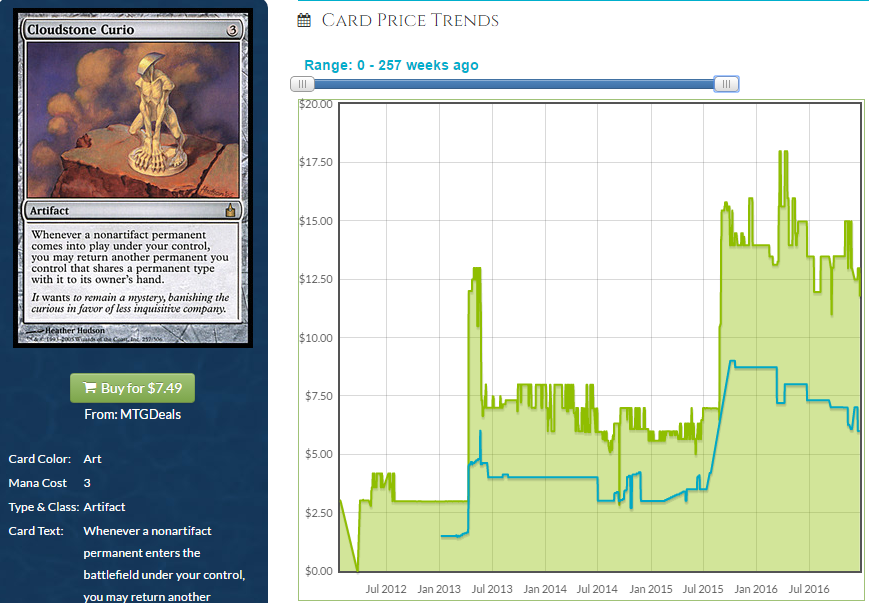 Curio is very well-positioned right now. It’s got great potential, the Masterpiece seems to signal a reprint may be a long way off and Trophy Mage loves to be returned to your hand and recast to find more cards. This seems like a great buy right now. This is bound to go up soon, regardless of whether Trophy Mage is the only card in the set that really interacts with it (I don’t know if people are casting a bad Damnation in EDH just to get a free 3-drop artifact). 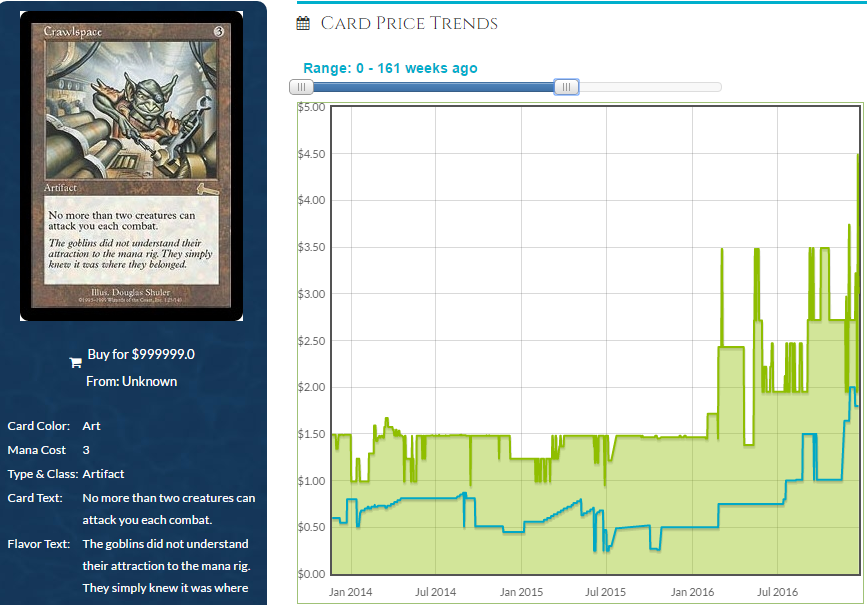 Do we salivate because this is recovering very nicely from a reprinting or do we stay away because it’s due for a reprinting? They have demonstrated a real willingness to print this before and could again. In the mean time, its price trend is encouraging and it’s a very good pillow fort card that could go well in the new pillowfort deck helmed by Kynaios and Tiro which happens to have blue in it. I don’t hate this, but I am a little worried about another reprint blowing our doors off. 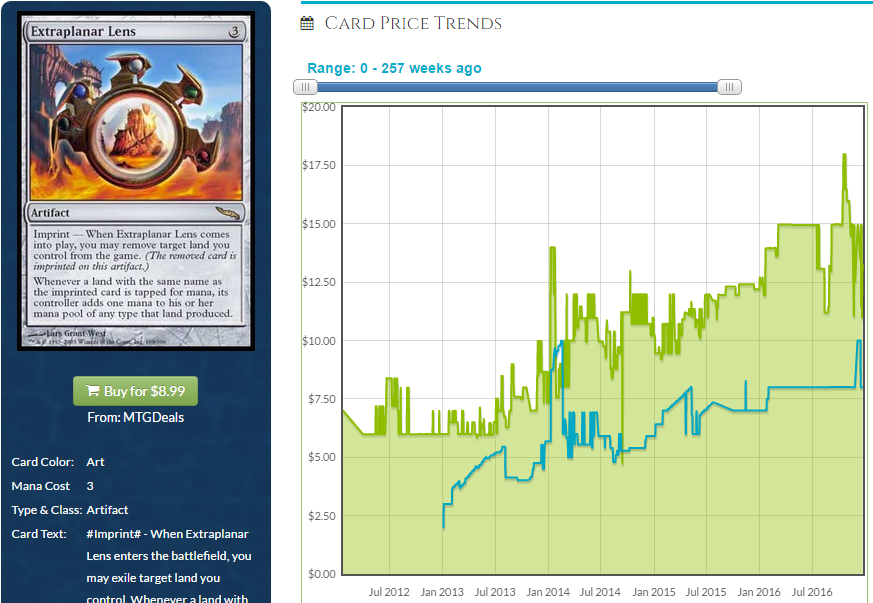 I don’t know if I want to pay $15 for this, but MTG Deals has 14 copies of this for $1 above buylist. That seems like a slam dunk. This is a stupid card that you can make work to your advantage by imprinting a snow-covered land so only you get the extra mana. Being able to tutor for it as early as turn 1 and having a body left behind is appealing. I like this a lot at $9. Don’t be a little piggy and buy all 14 yourself, though. 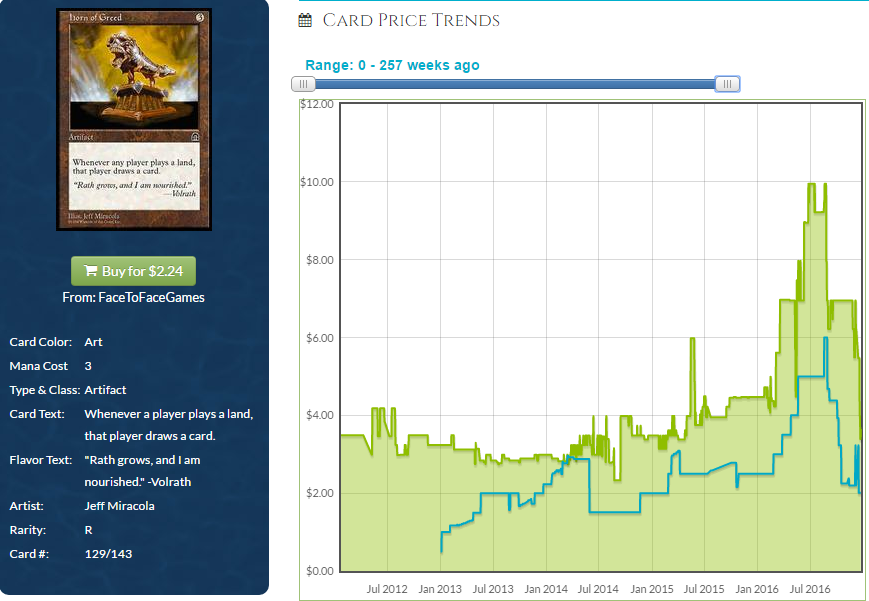 You can get a Conspiracy copy for like $1.50. Not bad for a card that The Gitrog Monster made spike to $10. Considering Conspiracy 2: Conspiratorial Boogaloo boxes are the $80 that is basically a store’s cost and no one seems keen on busting them, we are at peak supply and have hit a valley on price. Now is the time to get so greedy that you put the horn to shame. 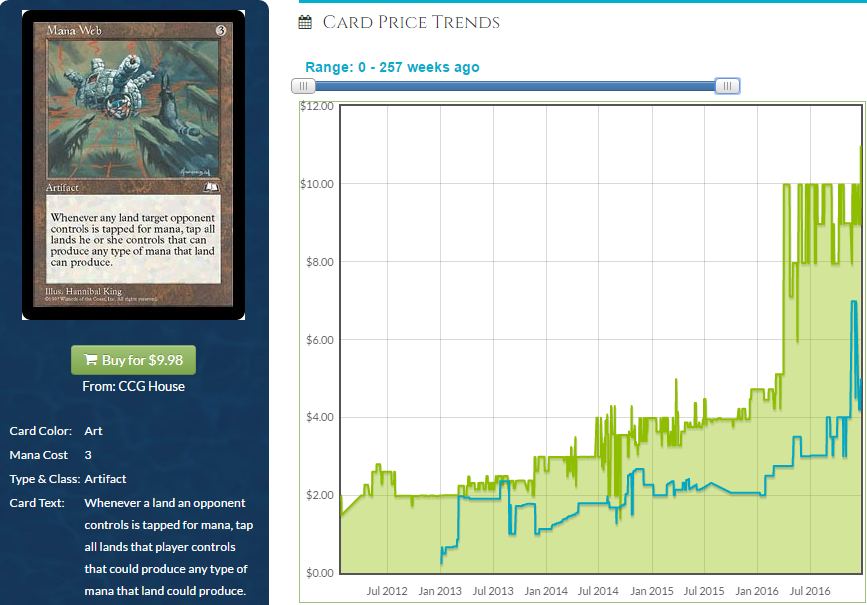 Mana Web is basically the only thing on planet Earth that had a good 2016. 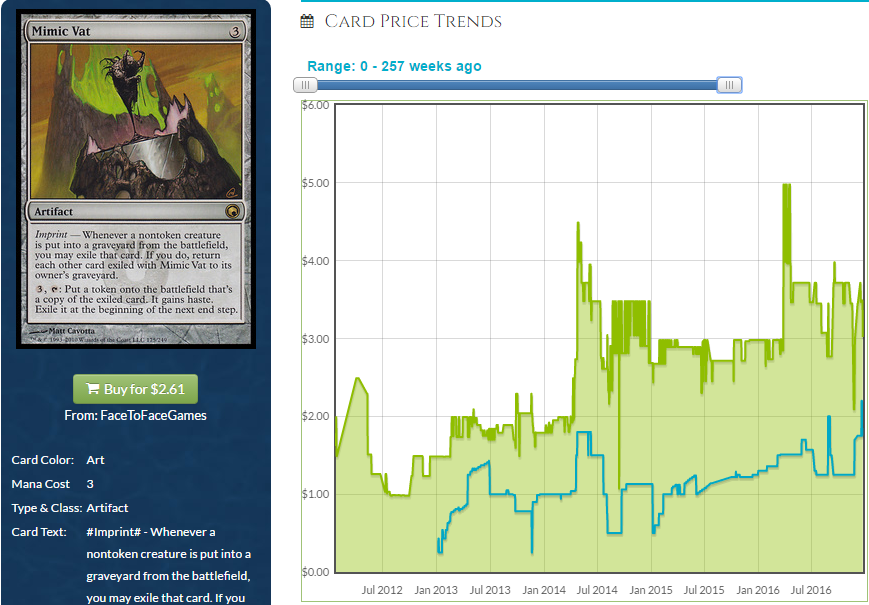 Mimic Vat is growing nicely and I think it’s got upside regardless of whether it sees increased play. That said, it surely should see more play. This couples very well with sac effects and so does Scrap Trawler. I think this gets played in enough EDH decks that it’s a good candidate. It’s mostly played in Trostani, which is brutal since you get double tokens and gain life when you use this and Trostani. Imagine that with Acidic Slime or something. Other decks are starting to catch on and use this, too and it’s already rising. Being able to tutor for this in a non-Trostani deck is appealing. 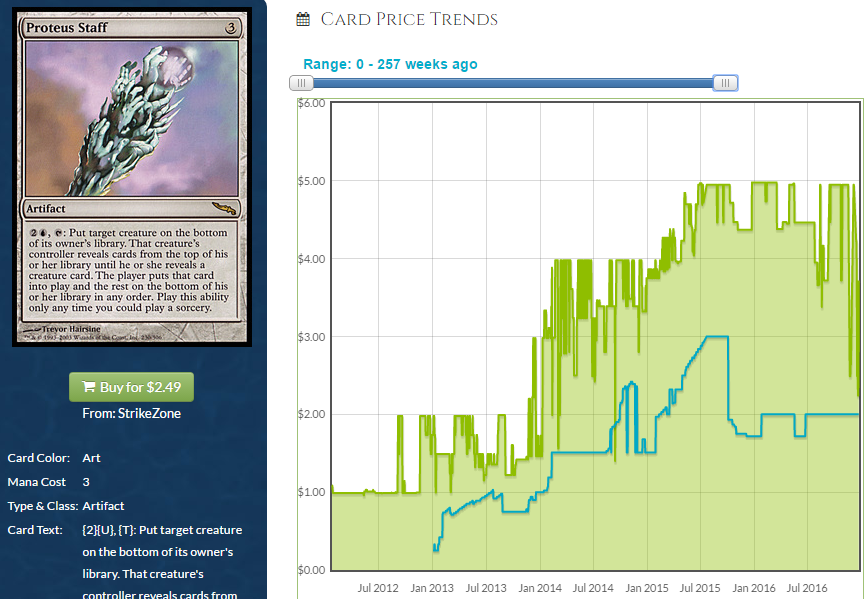 Narset made this card very appealing initially. It hasn’t done much since, but this has a ton of potential and is never going to get any cheaper. I like this as a pick-up, even now. 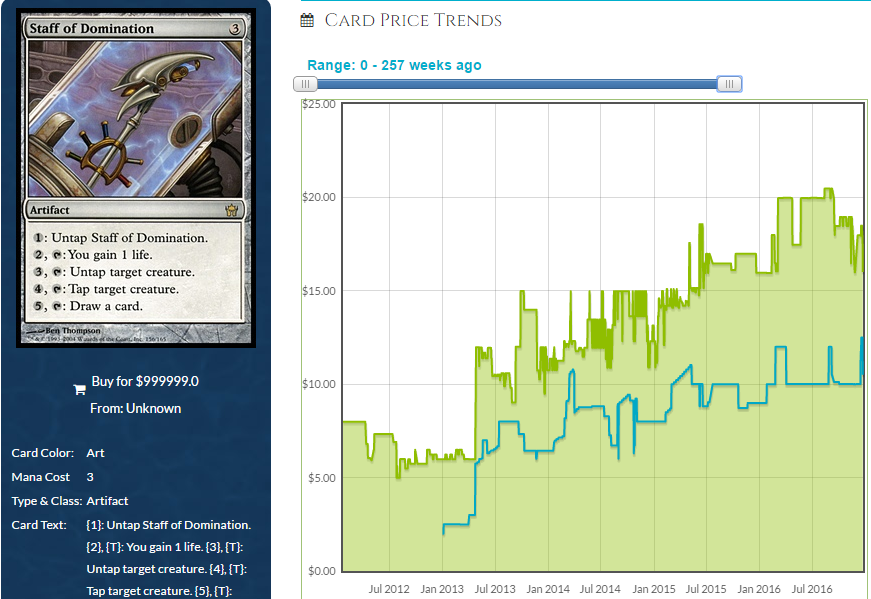 Oh, hai. Member me? I’m selling out everywhere. Kydele is still dumb and this card is still dumb with it. Fetchable with a blue creature, you say? Sign me up.

Everything I said about this card is true of Umbral Mantle, also. 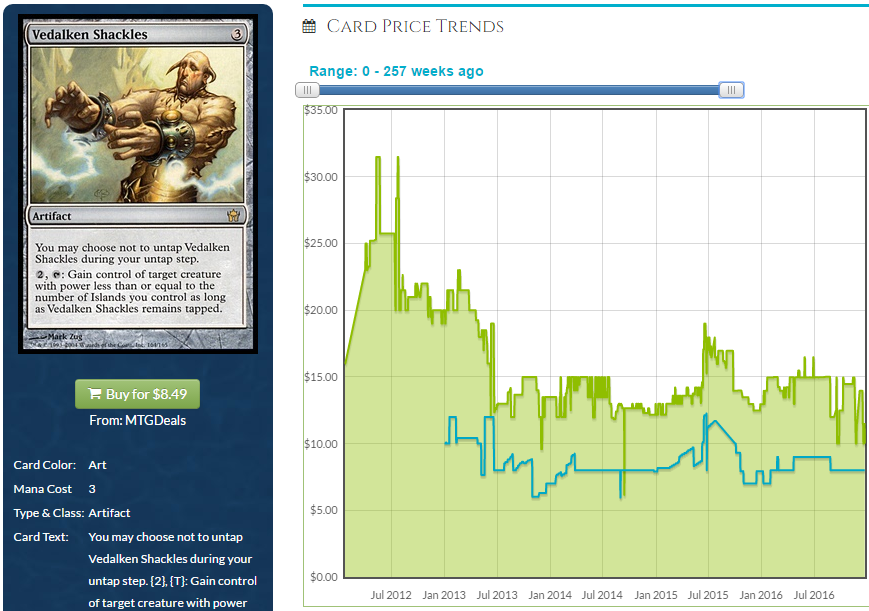 Making the last alimony payment to the woman I married on a drunken dare at the first GP Las Vegas is reminding me how long it has been since Modern Masters. I think this could start recovering. There is also a non-zero chance that people play some blue deck in Modern that runs this and it shoots up again. This is a very good card, and it’s at a very good price, in my view.

Next week we may have more spoilers to talk about and there is also a ton of Scrap Trawler shenanigans to discuss. They made Scrap Trawler the Buy a Box promo so clearly they have faith in it, also. That does it for me this week. Tune in next time!

2 thoughts on “The Rule of Three”