Wizards of the Coast surprised everyone this morning by announcing the Banned & Restricted list changes for all official formats a week earlier than was planned.

Here are the results: 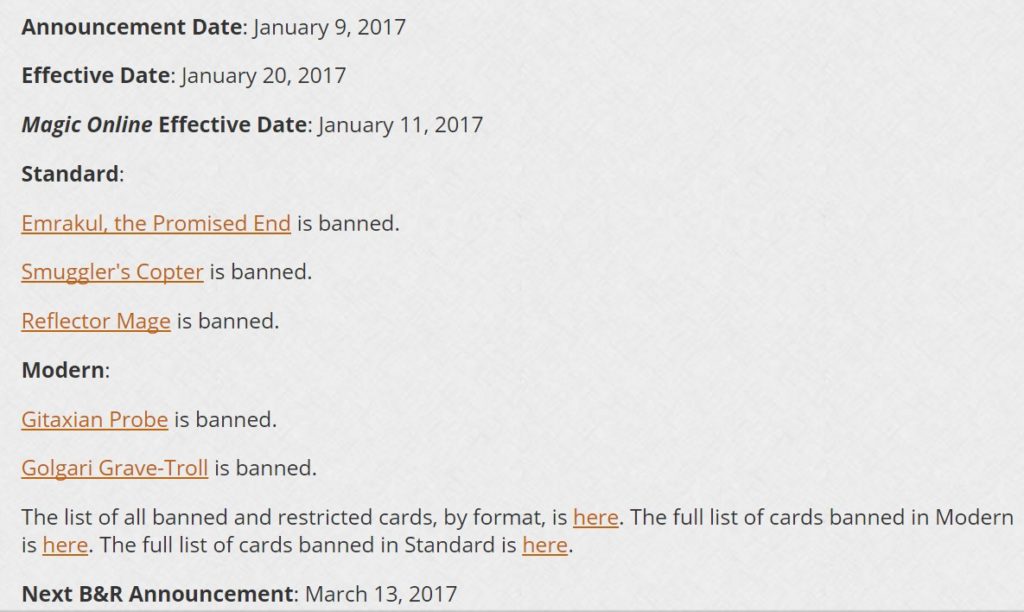 Ok, so that list was a bit, er, unexpected. Let’s unpack the signals.

Emrakul, the Promised End is banned because, as part of the various flavors of Marvel Aetherworks combo decks she represents a massive feel-bad scenario as early as Turn 4. The ability to put Emrakul into play in the early game and absolutely wreck opponents on the spot has been a central figure in the perception that we were in the midst of a “bad” Standard format since a few weeks after the release of Kaladesh. Now that sales of Eldritch Moon are no longer a priority, shaking up Standard carries massive benefit as we head into the release of Aether Revolt and Amonkhet, and this ban was widely discussed in the context of potential fixes for the format heading into the announcement.

Smuggler’s Copter was targeted for being so pushed that it was impacting the diversity of the format. Translation? It gets played in too many decks, but it also reduces the chance that many other cards will get played, including other Vehicles and Planeswalkers, of which we have several incoming in upcoming sets. Still, this is going to be a tough pill to swallow for the many Standard players that bought full play sets and the stores that are carrying heavy inventory of the card. My head is now on swivel for this card to crash in price immediately, and I will be looking to pick up foils on the cheap in case it ends up making a splash in Modern (via aggro, Ensoul Artifact or BW tokens builds) or Frontier continues to grow (where it may be safe for now given the unsanctioned nature of the format and some folks desire to make use of their copies.)

Reflector Mage is a very odd choice that WoTC explained was necessary to ensure U/W Flash didn’t run rampant in the format with the other bans on the table. I’m not sure I agree that such a ban was necessary, but at least this one doesn’t cost us much money. Had they targeted Archangel Avacyn, Spell Queller or Gideon, Ally of Zendikar, the financial body count would have been getting pretty high, so a powerful lower cost target makes some sense from that angle.

The most important takeaway from all of this is that Wizards is more than willing to ban for participation issues rather than big tournament/on camera dominance. This factors heavily into the safety of future specs since any card that might be deemed to be impacting sales is now at risk.

Gitaxian Probe is a card that has been discussed as ban worthy by many pros on the basis of being too flexible, too easy to cast and too useful in sussing out the likely shape of a game in Modern. In decks like Infect and Death’s Shadow Aggro the card allows a pilot to dig deeper, check whether the opponent has a relevant answer in hand, and fill the graveyard with Delve count. The card doesn’t win games by itself, but eliminating it makes some of the most dominant aggro decks a little weaker, and hopefully provides some breathing room for other strategies to rise.  Thankfully, I sold any spares I had lying around months ago as ban whispers were rising, and I hope you did the same.

Golgari Grave-Troll now holds the dubious distinction of being a card that has been banned not once, but twice in Modern. In fairness, Drege did not look like a threat when the big green guy last came off the list, but the printing of Prized Amalgam and Cathartic Reunion in particular helped turn the deck into a finely tuned juggernaut capable of ridiculously explosive and non-interactive game play. There was a good time to sell this card earlier in the year, and I hope you took the chance if you were holding because we are highly unlikely to see this card at relevant top tables again any time soon.

The other noteable announcement is that we are now going to get B&R changes before and after Pro Tours. Here are the details:

From a financial perspective this is going to make speculating on especially strong cards a bit more risky, since there is now an official safety valve on hand should things get out of hand. This should be read as a measure being introduce primarily to ensure that Standard seasons stay on track in terms of sales and participation, since problems of this kind can’t really be easily discerned on this schedule for Modern, since there are no longer Modern Pro Tour stops.

Make sure to note the relevant days in your calendar so that you can stay on top of things moving forward.

James is the CEO of ShelfLife.net, The Future of Collecting, Senior Partner at Advoca, a designer, adventurer, toy fanatic and an avid Magic player and collector since 1994.