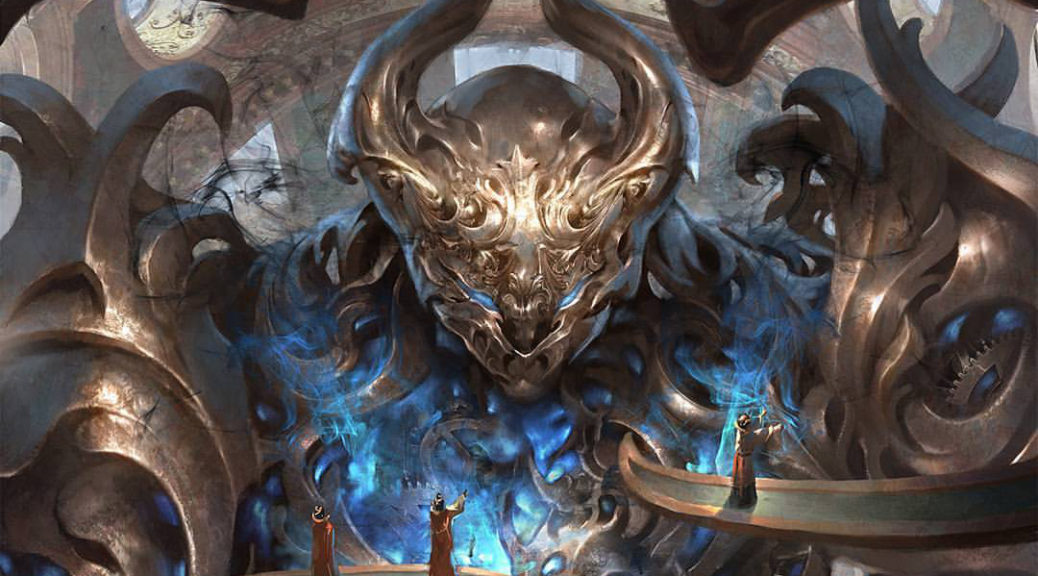 Time to speak some truth: I’ve been buying Inventions and Expeditions whenever I can.

Part of it is that I have a magpie’s eye for shiny and unique things. I have written before that I think foiling out a deck is a worthy quest and a good financial plan at the same time. The Masterpiece series has grown on me and I think it’s worth acquiring.

The market has set the price on these relatively quickly, and while the prices all started super high on the Expeditions, they settled to a more reasonable level within a few weeks. To be fair, we didn’t know exactly how many would be printed and how many people would want them. Some of the preorder prices turned out to be comically high, but that’s the nature of things showing up for the first time. 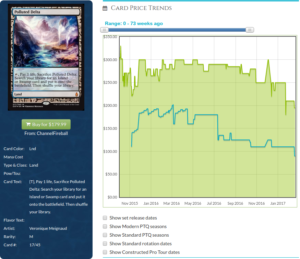 What I love most about that graph is the dip at the end of 2016, when the Standard Showdown packs were announced and started being opened. Given the frequency of having an Expedition or Invention in those, the amount of supply added was probably not 20% more, but that’s how far it has fallen at that news.

To buy low and sell high is a prime tenent of Magic finance, and the slight falling of values means that I want to get in on some lands. I’m a bit more optimistic on the enemy fetches, but I’m also aware that the player base is clamoring for a reprint of those.

It doesn’t take away from my enjoyment of owning these cards with the unique frame and appearance, which is why I pick up as many of them as I can.

The most important detail about the Masterpieces is this: They do not circulate a lot. People get them and put them in decks and leave them there. High-end foils are like that, and while the supply might be large, the number in circulation isn’t. Cubes and Commander decks soak up Masterpieces that get opened, and I don’t think they have a chance to lose that freshly-opened-pack smell before being double-sleeved and given a place of pride.

Normally, this is a good time to buy cards, at the tail end of a season. I wrote last week about some pickups I really like from Kaladesh. What makes this a good time for Inventions especially is that it’s going to take truly special circumstances for more of them to get into circulation.

I’m not ruling out a future edition that Wizards does, I think it’s super unlikely for them to release a significant amount of these again. It would be analogous to releasing a new batch of SDCC black planeswalkers, to my mind.

We are about to start spoilers for Modern Masters 2017, and I have a strong suspicion that it’s going to lower the amount of drafts done at local stores for AER-AER-KLD. We don’t know enough about the set or what’s in it, but players are fickle. We like new things, especially the chance to open something super expensive. Cutting back on the drafts done means that the supply isn’t going to go up very much, and so there’s a few Inventions with strong casual appeal that I really want in on:

Solemn Simulacrum – $66 – Universally good and has been reprinted a ton, yet still holding some value. The pack foils are not visually striking, while this is, and I like this to grow nicely over time.

Rings of Brighthearth – $55 – The card in regular nonfoil has apready risen recently, at at about $10 more than the pack foil, I’ve gotten two of these for different decks. There are not a lot of decks that want this effect, but it’s amazing when it’s good.

Chromatic Lantern – $55 – The gold standard of mana fixing, a card very popular in casual formats, and something that ought to go up over time.

Cloudstone Curio – $30 – Have you seen an Animar deck go off with this? Or an Elf deck? It’s a combo enabler, and those are the things that can really spike when a new card makes them good.

Gauntlet of Power – $31 – I’m not ruling out weird Infinity War crossovers or stuff like that, but with the nonfoil at $15, this is a great price for an auto-include in single-color decks.

Paradox Engine – $45 – Again, this is just a silly card that does silly things and is breakable even now. It’s also gorgeous, which is important.

Planar Bridge – $36 – It can’t go find the sorcery or instant you need to win the game, but it does tutor up a ridiculous number of broken things and that’s at the heart of Commander games. I love having these in long-term storage, because it’s got excellent potential.

Something that hasn’t happened yet to the Inventions or Expeditions is a spike in those prices. They have dipped a little and recovered to within a few percent, but they represent at least steady long-term growth, and the potential for a huge payoff should they ever spike. It might even be a Reserved List buyout, which we saw a few times this past summer, as some people attempted to clear out the market.

Torrential Gearhulk has seen a bump already, in all versions including the Masterpiece: 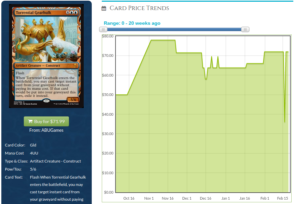 The bump from Pro Tour play affected all versions of this card, and that’s helpful to know if someone breaks Paradox Engine during Hour of Devastation.

Any chance you get to trade for a Masterpiece, you should at least consider. Depends on the trade and the percentage that someone is asking for, but they are fantastic trade bait, a sweet target for people to aim for and a financially stable card that you should seek to add to your portfolio.