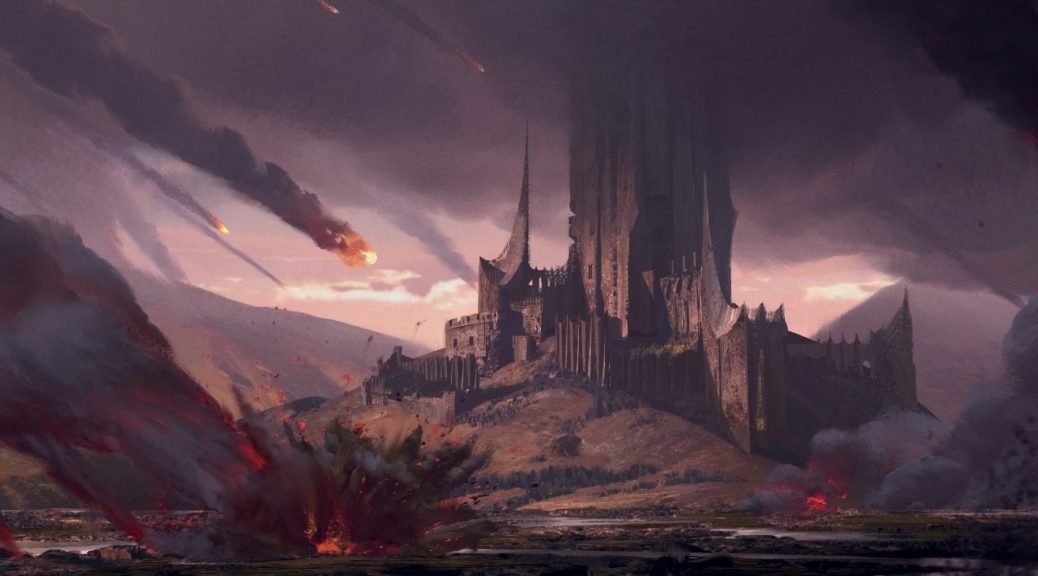 With the latest spoilers revealed this morning, Modern Masters 2017 is officially the most exciting edition of the series, and one of the most exciting Magic sets of all time. Wizards of the Coast is clearly looking for a home run here and there is a lot to digest in terms of how the set will impact investments in the Modern format for players and speculators.

Let’s get up to speed on the mythics revealed thus far: 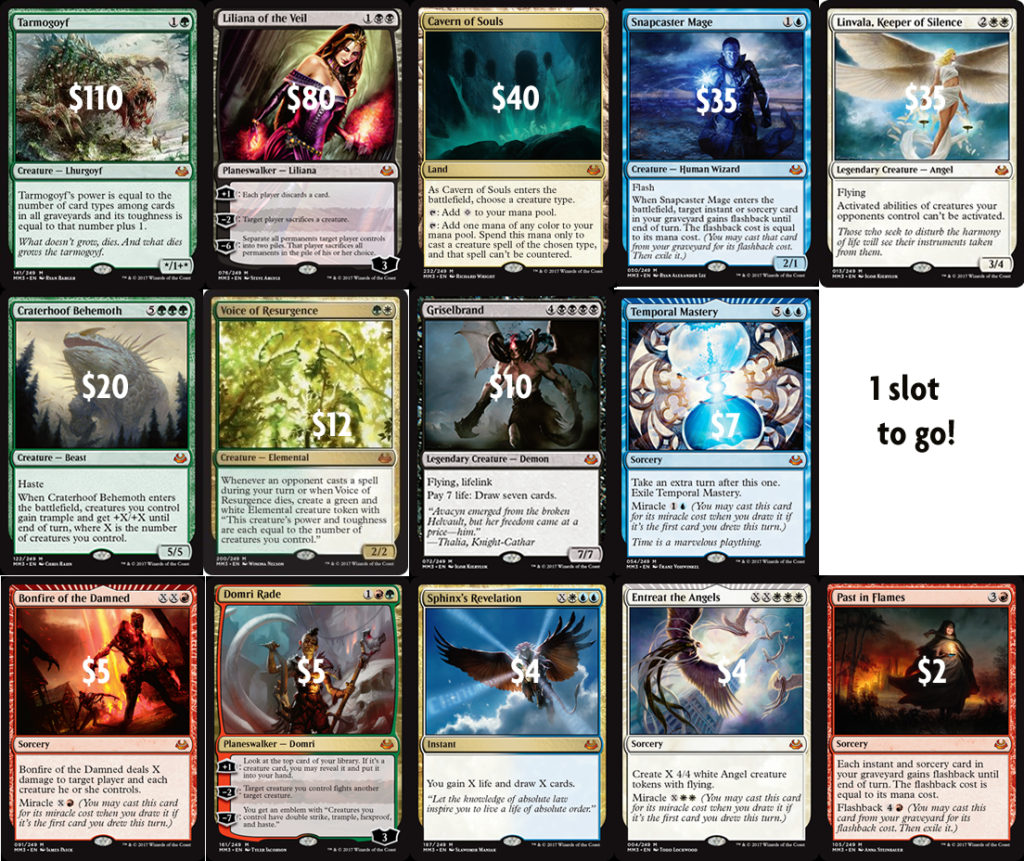 We now know 14 of the 15 mythic rares in Modern Masters 2017 [Update: Olivia Voldaren is the final mythic], and despite the inclusion of both Liliana of the Veil AND Tarmogoyf, with Snapcaster Mage and Cavern of Souls as a side dish, this offering is actually not that different than Modern Masters 2015.

Here are some figures on the MM15 Mythics, courtesy of number crunching that Saffron Olive did over on MTGGoldFish at the time. 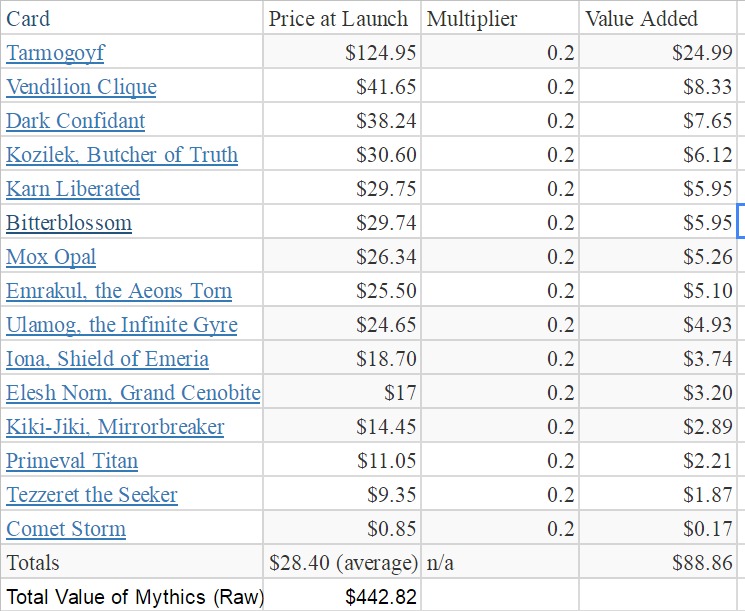 As you can see mythics were on track to contribute just under $90 in EV (Estimated Value) to MM15 at launch.  Now take a look at the MM17 mythic offerings by comparison.

As you can see, the mythics may actually represent less value in this set than in MM15, largely because they are dazzling us with LoTV and Tarmogoyf, while offering up significantly less $25+ cards. That being said, the demand profile as persistent, multi-deck four-ofs for Tarmogoyf, Snapcaster Mage, and Cavern of Souls may help those cards hold value better and recover faster down the road.

Now let’s take a look at the rares that are on offer:

Clearly the biggest story here is the inclusion of the Zendikar fetch lands. Adding five high demand rares currently priced between $30-$60 (after immediate deflation upon the reveal) was the clearest flag that this set is intended to push the envelope on Estimated Value. But the rare value goes significantly deeper overall than it did with MM15. Have a look at the different in EV just based on the rares we know so far:

If you squint, that’s a potentially whopping 50%+ increase in the EV being added by rares in this set, assuming a roughly equivalent value for the remaining rares, including likely bulk rares.

I haven’t run the numbers on uncommons yet, but with key cards like Path to Exile, Inquisition of Kozilek, Serum Visions, Terminate and Might of Old Krosa, my guess is these numbers will come in equal to or above even Modern Masters (2013), and significantly above the uncommon poor MM15.

If the set allocations were the same, these figures alone would make boxes a slam dunk, but beware, because there is more to this story.

A Word on Product Allocations

Early word from vendors was that Modern Masters 2017 featured an entirely different distribution pattern than the last two installments of the series. Previously, most vendors got some of their limited edition product from WoTC directly, and some of it via their distributors. This time around, distributors are controlling all of the inventory, making it much harder to get a handle on how much the print run has been increased (since you can’t simply measure WoTC case allocations). Many vendors reported that they had been offered “as much as they wanted” for MM17, which suggests that WoTC is fully aware of how juiced this set is and is looking to take advantage of the hype the kichen sink approach to set design will drive in order to achieve significantly greater sales. Solid information is still unfolding at this point but based on what I’ve heard so far I would estimate that the print run is at least 50-100% larger than previously, and possibly even beyond that. Massdrop.com sold over 1700 boxes in one drop the other day, and even more on a second one.

Interestingly, after the fiasco of Eternal Masters “limited” product being made available to vendors a full six months after it was first released (in Dec 2016), many players and speculators were looking gun shy at the prospect of pre-ordering this set and I managed to pick up my boxes at $175 without issue before most of the reveals went down. As of this morning, boxes are hovering around $210-$220 a box and they hype train could easily drive them back into the MSRP range of $240 or even beyond depending on what the forthcoming final EV calculation articles confirm about the expected value of a pack or box.

So should you be piling on to buy boxes with everyone else? I don’t think so. The Estimated Value on offer just so far, without the full set revealed, looks roughly equivalent for the mythics and significantly increased in the rare and uncommon slots. Paired with higher supply that suggests to me that nearly all of the cards included are going to take a large hit in the 20-50% range as we approach peak supply. Sure, a lot of cards recovered well from the last two Modern Masters sets, but they had less supply, and MM15 boxes appreciated much less than MM13 before them (partially due to lessened set value).

If you got in on boxes under $190 when those were available in the last few weeks, you may get a chance to flip them for +$40/box at peak hype, and cracking them will be unlikely to cost you much if you need the cards. Boxes over $240 however are not somewhere I want to be with this set, as the EV today is very unlikely to resemble the EV in a few months. Couple that with the specter of another holiday season surprise re-release and even Japanese boxes around $300 look scary.

Speculation with Modern Masters 2017 cards is not going to be easy. Once we know more about total supply, and we’ve seen inventory levels of key cards and mapped their likely peak supply pricing, we can start to probe for potential targets.

Generally speaking you are going to want to look for desperation sales from folks who snapped up boxes looking to crack and flip, only to find that everyone else is doing the same thing and driving prices into the ground.

Rares especially are going to be tough to keep afloat, and sales on Twitter and Facebook are likely to abound by early April. With a foil in every pack you should get a chance at some good deals on sparkly things for your cube or EDH deck.

When picking targets you will want to pair your patience with data on which cards are actually being played in multiple archetypes, usually as a 4-of, and in multiple formats. Fetchlands, Snapcaster Mage, Goyf, Cavern of Souls, etc fit this profile.

The other group of cards you will want to take a hard look (prioritizing on the same basis) at are the ones that definitely won’t be in MM17, including:

Priority Exits (If You Can) Given how much of this set is going to be bought and cracked in the next two months, you have already missed out on some key opportunities to sell off staples like Cavern of Souls and Liliana of the Veil.

Given current pricing, which is collapsing by the minute, there are still a few overpriced cards that should be exited in a hurry, if you have the chance:

It is worth noting that in removing Modern as a Pro Tour format, a reduction in Modern tournament support throughout the competitive ecosystem, and the continued LGS-only distribution of Modern Masters products, WoTC is signally strongly that Modern (and other Eternal formats) are Tier 2 priorities for them and are not the core drivers of revenue and user growth.

That being said, there is no reason to believe that Modern won’t carry on much as it has been over the last twelve months or so, as a largish niche for competitive players that have been around for a while and have the collections to support it. Modern Masters 2017 represents a strong shift towards accessibility and away from prioritizing collection value, in Modern in specific, and Magic as a game, as represented by the evolving set design strategy of Wizards of the Coast. With so many key staples being reprinted here, and with expansive print runs on deck, there is every reason to believe that some new players will pick up a Modern deck, and that Modern players will diversify their options by expanding their staples collection. (Hilariously, cognitive dissonance will likely enable many players to ignore the drop in their collection value as they happily run out to scoop up cheaper staples.)

From the speculators perspective, this paradigm shift towards accessibility suggests that holding Modern staples for more than a few years after release is going to be a very risky game. I didn’t get caught out on much with this set list, but cards like Abupt Decay and Scavenging Ooze now likely represent failed specs that I would be happy to sell at or near cost, given how long they might take to recover past potential.  Moving forward, opportunities related to Modern are much more likely to involve three specific categories of targets:

Good luck out there…it’s getting tougher!