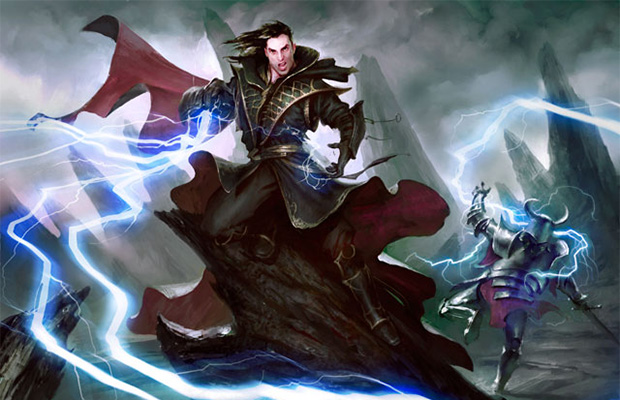 I’m going to be honest, the research for this article didn’t lead me where I thought it was going to at all. I started out with a request from my readers (and my boss, someone I’m even more inclined to listen to) that I talk about how the adoption of 1v1 Commander on Magic Online will affect that format and prices. It’s Commander and I write about Commander, so I should know about it, right? That was the theory, anyway. It was a theory I even accepted myself. “How different could it be?” I asked myself, not doing really any research between last week and today. “After all, it’s not like 1v1 Commander is Tiny Leaders.” You want to know what I learned right off the bat?

Actually, I will get to that in a second, but first there’s something I want to cover. What do I mean by the adoption of 1v1 Commander by Magic Online? Well, last week, they made this post to a few places including their Tumblr which is where I cribbed it from.

We have plans to introduce more support for 1v1 Commander.  As part of this, R&D determined that format is better off with a starting life total of 30. At one point we had planned to introduce this change as well as league support and a modified banned list today, but later decided to instead introduce it during Amonkhet season.

Unfortunately, in this process the life total change did not get taken out of this build, and so today it is live. Now that it is live, since it is a change we were planning on making anyway in the future, our intent is to simply leave it in place.

Stay tuned for an article about what support we plan to offer for 1v1 Commander leagues moving forward!

This was exciting news for a non-zero number of people. I think the move to 30 life from 40 is more significant than the fact that they can play on MTGO, but regardless of why people are happy, this could mean more people adopting the format and therefore some money could be made for some people. Why not have your EDH writer talk about it? After all, like I said, it’s not like 1v1 is Tiny Leaders. You want to know what I learned in my research?

There aren’t the same restrictions on casting cost, but there might as well be because people are not playing EDH cards, they’re playing 100 card Legacy singleton. The first place I headed was MTG Top8 to take a look at the list of most-played cards in 1v1 tournaments so I could get an idea of what the staples in that format were. I did a double take. 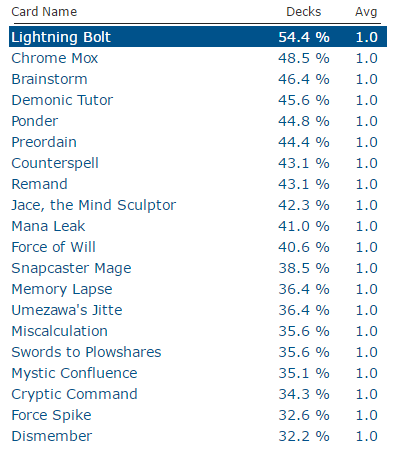 Oh, man. This is a Legacy list. I must have clicked on the wrong banner or something. Just to be sure, I navigated to the Legacy tab to check out their list and it wasn’t the same. 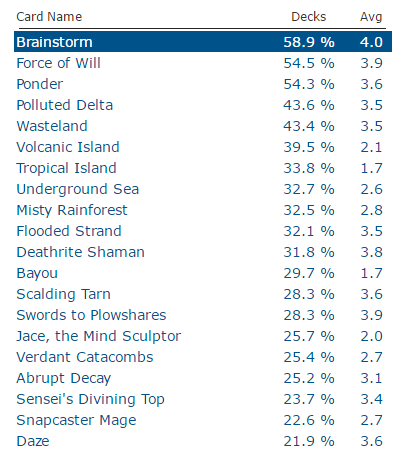 Here was the Legacy list and while it was obviously different off the bat because the first list didn’t include lands, adding lands to the 1v1 Commander list didn’t change much, it just pushed everything down. 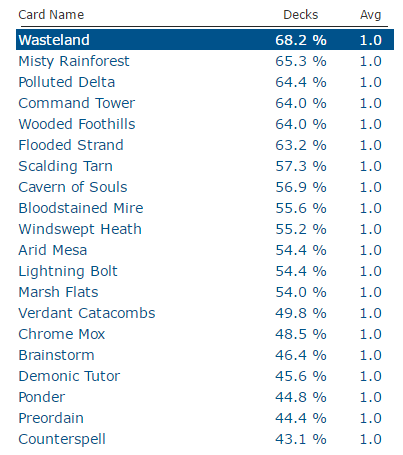 This has to be for 1v1 Commander. Either that or people started playing Command Tower in Legacy when I wasn’t looking. What’s going on? There is a lot of cheap, basic card draw, 1-for-1 removal spells and a ton of blue cards. This is nothing like the Commander I know anything about. And where’s Sol Ring? To answer that question, we need to get into the next biggest difference between 1v1 Commander and traditional EDH.

Their Banlist is Insane

It’s actually sort of sane given the things you can do in a format with such a gigantic cardpool but it’s a weird amalgam of the EDH and Legacy banlists. It’s pretty clear they don’t want someone to get so far ahead on turn 1 that the other person can’t ever catch up and they banned cards like Sol Ring, Tolarian Academy and Mishra’s Workshop accordingly. Naturally Nectoric Ooze is banned (my hope in that typing that sentence it would be clear to the people who understand why Necrotic Ooze is banned that I have a deep understanding of the format and they would nod in assent, their respect for me deepening) because a combo that was in a fringe Legacy deck for 6 months until everyone got bored of it is pretty oppressive.

The full list is on their site but I’ll paste it here anyway.

That’s a really big banlist, and the banned as a commander list is probably necessary. I don’t play this format, I can’t stress that enough, but I read what the people who play that format write online when they are in the mood for complaining about Magic and they didn’t like how oppressive Derevi was or how consistent Yisan was or the fact that no one wants to play 1v1 EDH with them because it misses the entire point of EDH.

Still, Wizards supporting the format more, changing the official rules to reflect that 30 life is better than 40 if you want games to finish in a timely manner and signaling that they’re willing to have more input on the future bannings and rules applications for this format (something people are largely in favor of for a reason I can’t fathom) at least hints at some more legitimacy for this. It’s not Tiny Leaders in this regard – Wizards has more than acknowledged it and is signalling that they plan to support it, even if it’s relegated to Magic Online (not that they could stop people if they wanted to play it elsewhere, could they?). What does any of this mean for prices, if anything at all?

What I found when I scoured 10 pages of their top cards played in 1v1 is that when I finally got out of Legacy staples I ended up with cards that were in fewer than 10% of the decks. 10% of the decks in a fringe format that don’t get additional support from Legacy or Vintage or EDH aren’t good spec targets. Is 1v1 support on MODO going to bump the price on Sudden Demise, Evasive Maneuvers or a bunch of other cards you may or may not have to look up because you don’t know what they do?

I set out to highlight some targets that 1v1 could push up but there’s nothing. 1v1 could create additional demand for cards already played in Legacy and for stagnant Legacy cards, this is pretty important. Legacy is plateauing a bit and if another format comes in and picks up the slack, some of the cards tailing off could head back up and the cards flat could see a bump. This could be the best thing for Legacy rather than EDH and while that’s not what I set out to prove, I don’t mind pivoting a bit and getting you guys some picks. 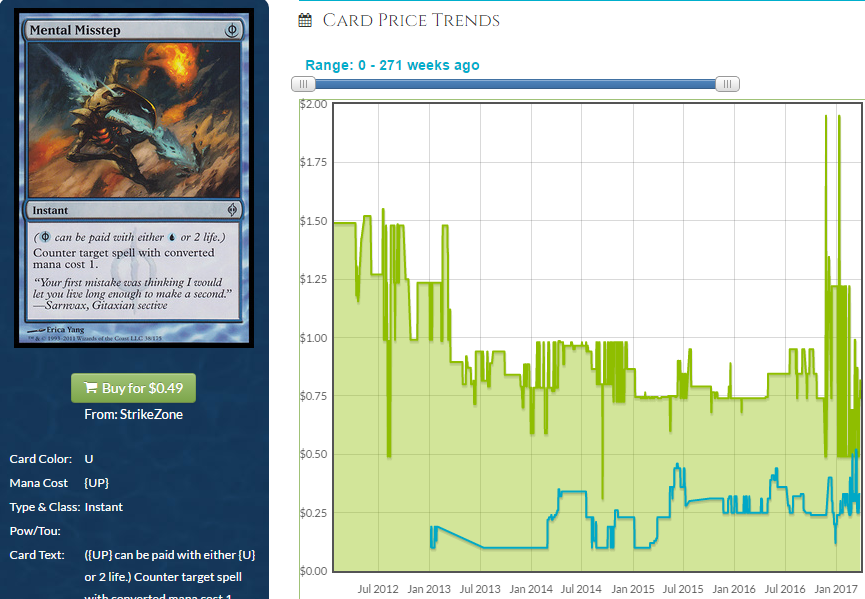 This is a Vintage card but it’s banned in Legacy which has been disastrous for its price. It’s buyable for $0.50 right now which is pretty brutal for a once-proud card. Foils seem much sexier at $15 right now and while Vintage is propping that up, there is still possible movement. One interesting thing to note is that this is even cheaper on MODO – around 0.15 tickets, in fact. This is a card that is in almost 30% of 1v1 decks putting up results (in some ways this is a better measure than EDHREC’s “here is what a bunch of lunatics built” but in some ways, not so much since EDHREC can forecast future demand better) and will get played in 30% of new 1v1 decks on MODO. Both paper and MODO seem like cheap, low-risk buys. Misstep never really got a chance to get lost in dollar boxes since it started out very valuable and tailed off, rather than the other way around. This could have the same bounce as a “second spike” card. 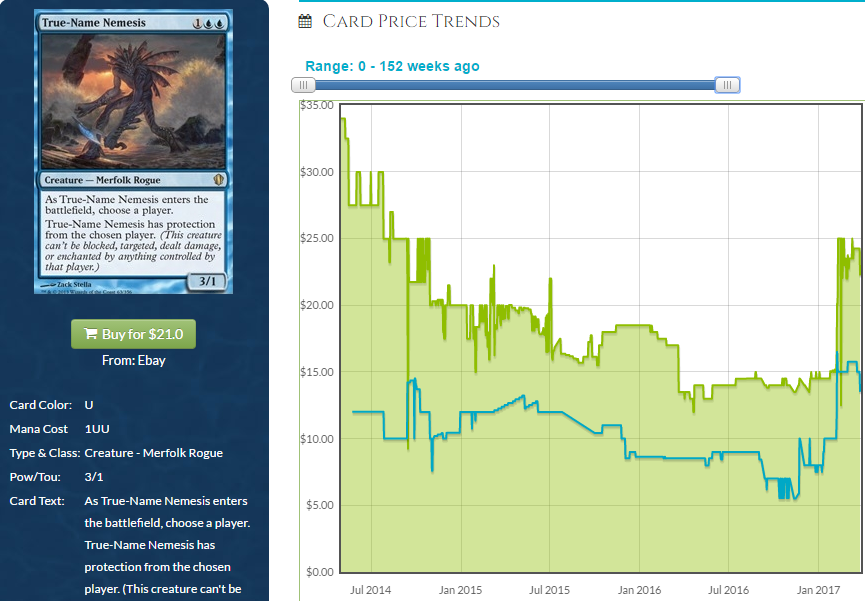 Nemesis is ticking back up and it’s time to ride the wave as it were. Legacy and Vintage fish decks are all about this card since it gets merfolk buffs and for a while people were using it just to hold swords in neo-squawk builds. This is in 25% of the builds which isn’t surprising because it’s much, much better in 1v1 commander than it is in multiplayer. This is already cresting and I think given how unlikely a reprint anytime soon feels, this is a great target. 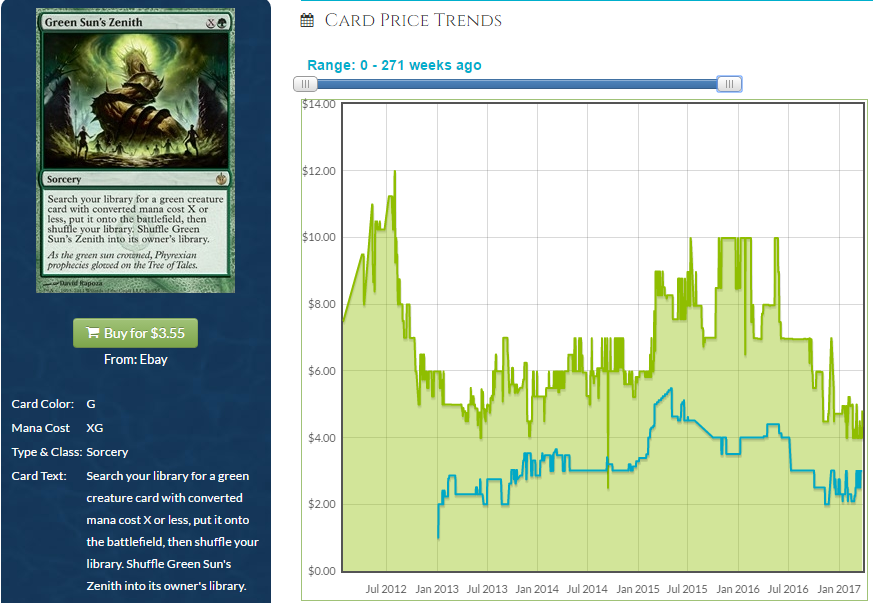 This is a graph shape I can get behind. The printing in Eternal Masters (it’s banned in Modern) tanked the price but EDH and now 1v1 could give it the demand it needs to get back up. In any case, this is basically historically cheap and as good as this card is in as many formats where it’s still legal, I can get behind this. I might not have noticed this is still cratering if I hadn’t started this fools’ errand of an article so, hooray, I… guess? This is a silly card that does silly, unfair things and it’s good enough to be banned in Modern, so why not buy it at its floor? Seems like that’s what we try to do, here. 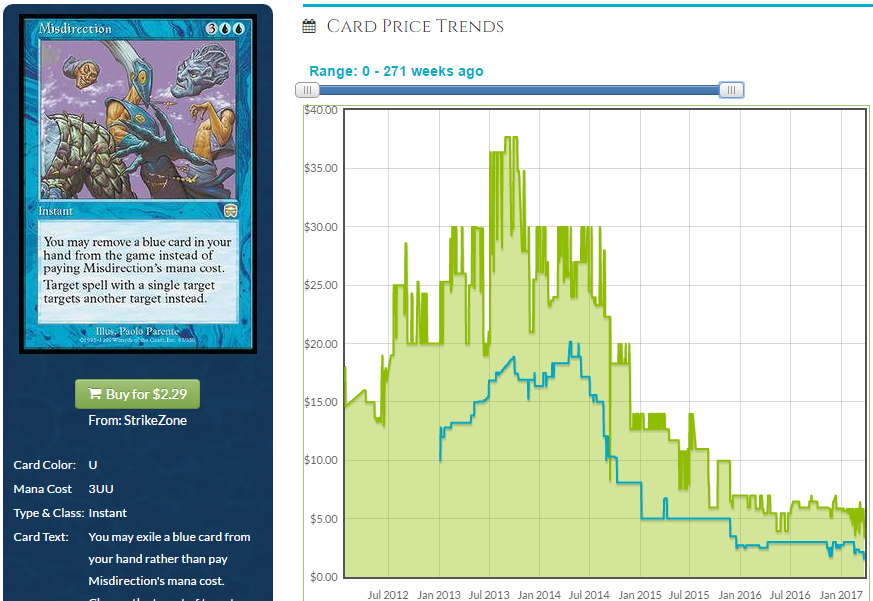 Misdirection is a card I’m not super duper confident about but based on the metrics we usually use, this is a low-risk high-reward target. It won’t get as expensive as it was when it was a Legacy staple in low supply but Conspiracy didn’t add quite as many copies as it would need to add to suppress the price forever, so it’s clear that a lack of demand is what’s hurting this once-proud card. Increased demand could help us get there. I’m not as confident about this as I am the others and this is in a scant 20% of decks currently, but we could see a lot more demand if 1v1 picks up, both in paper and on MODO.

I didn’t end up coming up with the targets I thought I might when I set out to write this piece but we did identify some cards that are likely to go up even if nothing happens so there will be some real upside possible if 1v1 starts pushing prices up. More demand is always good for staples and these cards are staples for sure. Next week we’ll have Amonkhet to talk about and I’m much happier about that, so make sure to come back next week. Thanks for reading. Until next time!

10 thoughts on “Unlocked Pro Trader: French is Greek to Me”