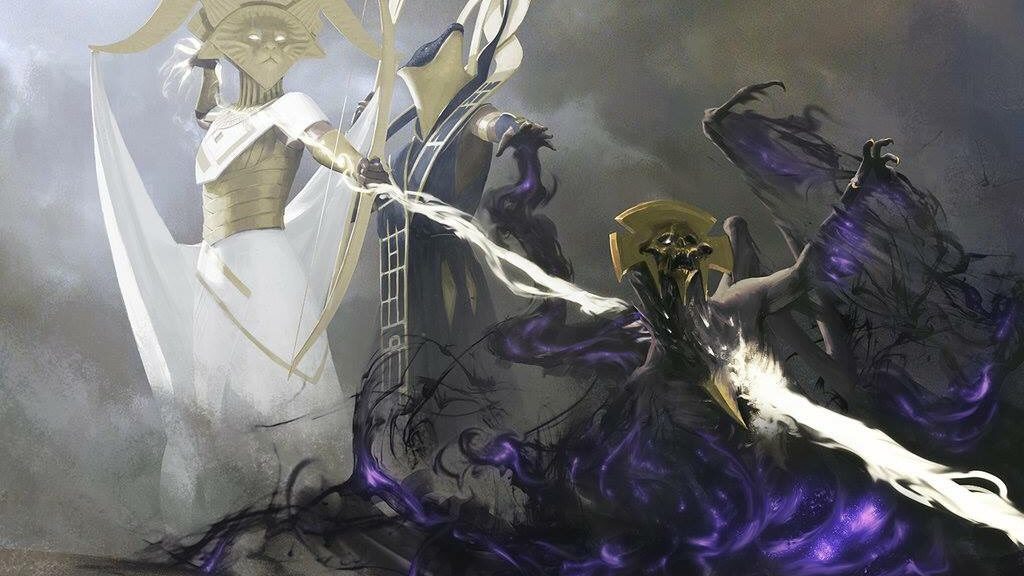 The Masterpieces are here! In Amonkhet, they are known as Invocations this time around. I have some beef with some specific choices for this special set, but I see what their goal was. Wizards wanted to give us a 3-D effect and something that was visually very different, and they got that. I don’t like the unreadable card name, and I think there’s a lot of spell bubbles, but I’m not an art critic. I’m a casual player and someone addicted to foils, but this design doesn’t have to be for me.

Even if you don’t like the look of these cards, these are valuable. Even the least of these will be worth about the same as the most expensive mythic, barring the very unforeseen.

This week, I want to look at these current prices and see where they will probably end up, price-wise. The preorder price is an amalgamation, between some sites, and eBay sales aren’t up yet.

Aggravated Assault – Original: $12, Set foil: $28, Preorder: $30 – If you like this you’re going to pay a little bit more, and that makes sense. I don’t think the demand is very high for this card, though. It’s rare that you activate this more than once, even if you’re a Yidris, Maelstrom Wielder player. This card doubled when his deck was released and hasn’t been printed since Onslaught.

Prediction: I think $30 is a perfect price here. It’s on par with the set foil, which lots of people find appealing.

Attrition – $9, $40, Preorder $35 – I want to like this. I really do. Attrition works so well with a number of casual strategies (Meren, tokens, Karador) and this has potential. It’s popular enough that I think the price is going to creep upward but not a lot. 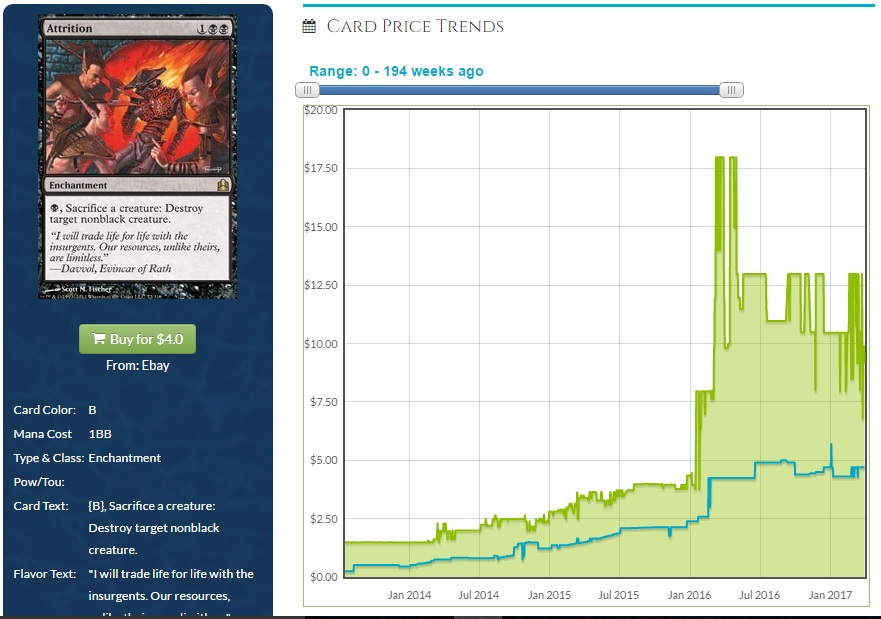 Austere Command – $12, $35, Preorder $50 – Lorwyn and original Commander are the only printings, and I think this price reflects the appropriate demand and the semi-small supply. It’s not played outside Commander and Cube, but it’s nicely flexible and worth playing in most casual decks.

Prediction: This is going to fall to about the same price as the set foil. It’s not pretty enough to be worth upgrading to if you already have a foil.

Aven Mindcensor – $8, $53, Preorder $45 – We’ve had it spoiled that this is going to be a rare in Amonkhet, so that $8 isn’t going to last. It’s not widely played in Modern or Legacy, though it does pop up in sideboards. It needs to be said that the frame is going to play a big part, as those who like the Future Sight frame REALLY LOVE that frame and I don’t see the pack foil budging in price.

Prediction: The Invocation version will fall by a few bucks, but not terribly far.

Chain Lightning – $11, $3/$6 Eternal Masters, $6 for PDS foil, Preorder: $40 – This seems super duper and incredibly way off. This is played in one deck, Legacy Burn, and while it’s a four-of it’s not usually the market for these promo versions.

Prediction: This falls like a rock. It should drop down to the $20 range, which would be 3x the price of foils available. Ouch.

Consecrated Sphinx – $20, $60, Preorder: $50 – The card is bonkers insane in any format where it survives being cast and not being killed before the next draw step. There’s precious few cards that will get you attacked to death faster, and the single printing is why the price is so high.

Prediction: Against all my instincts, I think this is going to go up. It’s the only Sphinx so far in the Invocation set, and I think there will be enough casual players who want this to let it creep up by $10-$15 or so.

Containment Priest – $15, Preorder: $75 – This sees a small amount of play in Legacy and Vintage, and with no other choices for making unique versions of the card, I’m expecting big things out of this foil. That said, this is a 5x multiplier, and I think that’s just too high.

Prediction: This ends up at $50-$60, there’s just not enough demand, even though its only printing was a Commander precon three years ago.

Counterbalance – $20, $115, Preorder: $65 – This is in demand because of the power it offers in formats where Sensei’s Divining Top is legal. I rarely see this in Commander, and its power in Cube is debatable. A foil multiplier of 6 is fascinating, though, and speaks to the income and the four-of nature of this card.

Prediction: I think this has room to fall. The pack foil is far superior in appearance, but those who want this will be few and far between. I expect this to land at $40-$50.

Counterspell – $1-$175 for nonfoils, $6-$32 for foils, Preorder: $60 – The Invocation version is the 25th entry we will have for this card, including the foil versions. You have a wide variety of art to choose from, and can go all the way back to being an Alpha rare. You can choose an FNM promo, or a Judge Foil, or a selection of special printings.

Prediction: I think this falls to $40 or under. Yes, Commanders and Cubes play this, but there’s rarer and older versions to chase.

Cryptic Command – $26-$30, $35-$110 foil, Preorder: $90 – The Lorwyn foil is way up there as the original foil, but the Modern Masters foils are intriguingly cheap. This is a great and powerful and often-played card, so I think it’ll have a premium.

Prediction: This version of the card will be bought in playsets, and supply will never have a chance to get too big. This will settle in the $75 range, bridging the gaps nicely.

Prediction: Those who want this will also be buying the full playset, but there are so few of those decks. The demand is low, as evidenced by the complete disregard by the market for the FTV version, so I think this will fall to about $30-$35.
Next week I’ll come back with the rest. Stay tuned!

One thought on “Invocation Predictions (Part 1)”