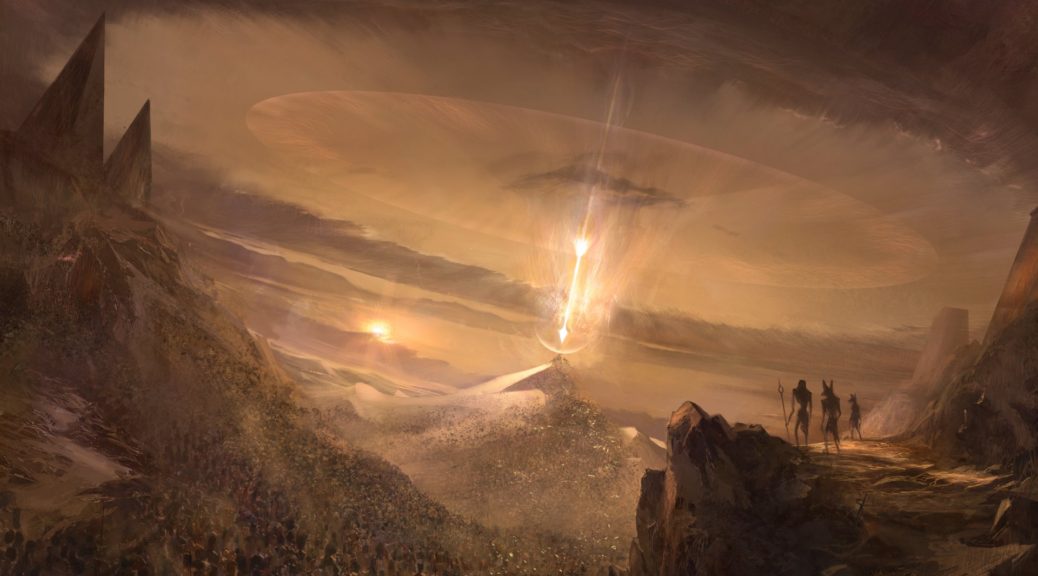 Last week, I went over my thoughts on the eventual prices of the new Invocations, and while we are missing the full complement of the Gods, the reprints are known and starting to be presold.

With a week that’s gone by, the preorder market is a little more stable. I’m going to use TCG’s prices, as that’s reflecting what people are currently paying for these cards.

Daze – $2 nonfoil, $120 pack foil, $15 Eternal Masters foil, preorder $75: The good news for this card is that when people play this, they want the full playset. No messing around with three or less, and that’s part of why this is so high in price. The bad news is that it’s not good in Commander, and not every Cube wants a copy.

Prediction: My first blush is to say that this drops as low as $50, but it could go lower. Having an old border version to chase puts a definite ceiling on the card, but the price on the EMA foil is indicative that the demand isn’t all there.

Diabolic Intent – $19/$65/Preorder $40 – I’ll be honest, it’s tough to find a place where this sees a lot of play. It is powerful, and good in Commander, but that format has a whole lot of tutoring options available. This price is more reflective of the very low supply than the demand profile.

Prediction: I think this is perfect, actually. It’s right between the regular and the foil, the supply stays low, but there just aren’t a lot of people clamoring to have this. It might fall to $35, if it does fall.

Divert – $1.50/$20/Preorder $30: I didn’t even know this was a card, to be honest. Sure, it’s a single mana, but this is as conditional as can be. One spell with one target and they don’t have two mana available? It’s seeing a tiny amount of play in Legacy sideboards, but the drawbacks are real.

Prediction: I think this drops even farther, and will struggle to be more expensive than the pack foil. There just aren’t enough people who need this in a deck, and even then, they will only need one or two copies.

Entomb – $12-$20 nonfoil/$15-$52 foil/Preorder $50: Now this is a card. Thematically, it fits the block and the setting very well, and it’s played a lot. Reanimator is a strategy that’s tried and true in Legacy, Commander, and Cube, and all of those decks want this card. Ideally as a four-of, but that’s the nature of Commander. The tricky part, though, is that this has been printed in Eternal Masters and a Judge Foil and the Premium Deck Series. There’s a lot of copies out there already.

Prediction: I think this will fall, but not by too much. $35 is the point at which I’d want to be moving in, but I’m not certain about the demand it’ll face.

Force of Will – $80/$330/$465/Preorder $300:  Yep, we are now entering our third additional printing of this card. Original, judge foil, gorgeous Eternal Masters, and now this promo version. The good news is that this is one of the most prevalent cards in Legacy, some might say the defining card. The bad news is that this might have the farthest to fall.

Prediction: I think this will be the case study on how desirable the new frames are. The players who don’t want this one will sell out immediately, and others will snap it up. What I don’t see is people opening this and saying, “Oh sweet! I need three more to get started in Legacy!” I expect this card to lose $50 or more in value, bottoming out in the $250 range.

Loyal Retainers – $52 nonfoil/$22 foil/Preorder $33: This card has a tiny supply but not that many decks want to play it. Aluren likes it, and there are strategies that pop up using it, but the demand just isn’t very high.

Prediction: I think this stays in the $30 range for quite a while.

Maelstrom Pulse – $18/$34/Preorder: $45: This is a card that’s been a mythic and a reprint and a promo, but it’s lcimbed back into the nearly-$20 range because it’s seeing good amounts of play in Modern, and is a worthy card in almost any casual format. Universal answers are always good, but ones that have the potential to clean up a bunch of tokens or both Tarmogoyfs as going to stay in demand.

Prediction: It sees enough play and the supply is small enough that this price doesn’t drop far, if at all.

Mind Twist – $2 up to $400+ for Alpha versions/no foil printings/Preorder: $60: A haymaker of a card, and one that’s still banned in Legacy. With fast mana, this is a big swing of card advantage, though it can’t solve problems in play. This hasn’t been printed since 4th edition, and so this is the only foil version that can be found.

Prediction: I think being the only foil version bodes well for the card, but the severe lack of formats to play it in does not. If you’re into speculating, this might be a tasty target, as an unbanning in Legacy would cause a spike to double its current price, or maybe more. As it stands, though, I think this drops a little to the $50 range.

Pact of Negation – $37/$53/Preorder: $80: This card has a foil multiplier of less than two, indicating that people want it, and having the foil version isn’t important. Casual demand is not driving the foil price up in relation to the nonfoil, and that’s extremely relevant here. Pact sees a lot of Modern play, generally as a way to protect your combo on the turn you’re going to win.

Prediction: Given the prices already in play, this should fall by at least $20, and I wouldn’t be shocked to have it land in the $45 range.

Spell Pierce – $1/$6-$30/Preorder: $60: Before being in Modern Masters 2017, this was one of the more impressive foil multipliers out there. Spell Pierce sees a fair amount of Modern and Legacy play, and isn’t terrible in Cube, though it’s garbage in Commander. Having the Invocation be twice the Zendikar foil is far too high though.

Prediction: A price correction is already underway, frankly. The listed Market Price is $70, but copies are being listed for $55. I would expect this to end up in the $40 range.

Stifle – $5/$18-$54/Preorder: $45: There’s a lot of things this card can do, some of them very powerful, but still quite niche. Some Legacy decks use this offensively, mainly targeting fetchland activations, but it’s not Modern legal and I’d have a hard time running this in Commander.

Prediction: Since players have a choice between an old border foil, a Judge foil, and the Conspiracy foil, they are going to have to want this version above all else. It’s possible, but unlikely, and so I think this will drop just a bit, down to $35-$40.

Vindicate – $5-$7/$18-$54/Preorder: $45 – The demand for this is high in Commander decks that can run this, and occasionally a Legacy deck will have it…but that’s all. This has been a Judge foil twice, and again, it has an old border foil that’s generally preferable to this new blocky frame.

Prediction: The market is already trending down. Market price is listed as $48, but copies are available at $37 shipped and no one is biting. $30 is where I expect this to stop sliding.

Worship – $8/$35/Preorder: $40 – After its original printing, it’s had three core set printings to boost supply, which is good because this sees just enough play in Modern to be worth a few bucks. The foil multipliers are appropriate, even a little high, but I wouldn’t trust this to keep myself alive in Commander for long.

Prediction: It’s under the 7th edition foil and just above the others. I think this is a stable place to be.

Wrath of God – $5 for Revised up to $750 for Alpha/$8 FTV up to $120 for 7th Edition foil/Preorder: $55: There are now 23 different versions of this out there, counting the foils. Full-art, FTV, original Beta borders, your choice of artwork. Having so many in circulation means that the demand for this card is going to be very telling, in terms of how many people want the Invocation specifically.

Prediction: The market price is correcting already, and while some sales happened at $55, the undercutting is starting. Copies are available at $45 shipped, and I think $30 is going to be the price by the time Hour of Devastation comes out.