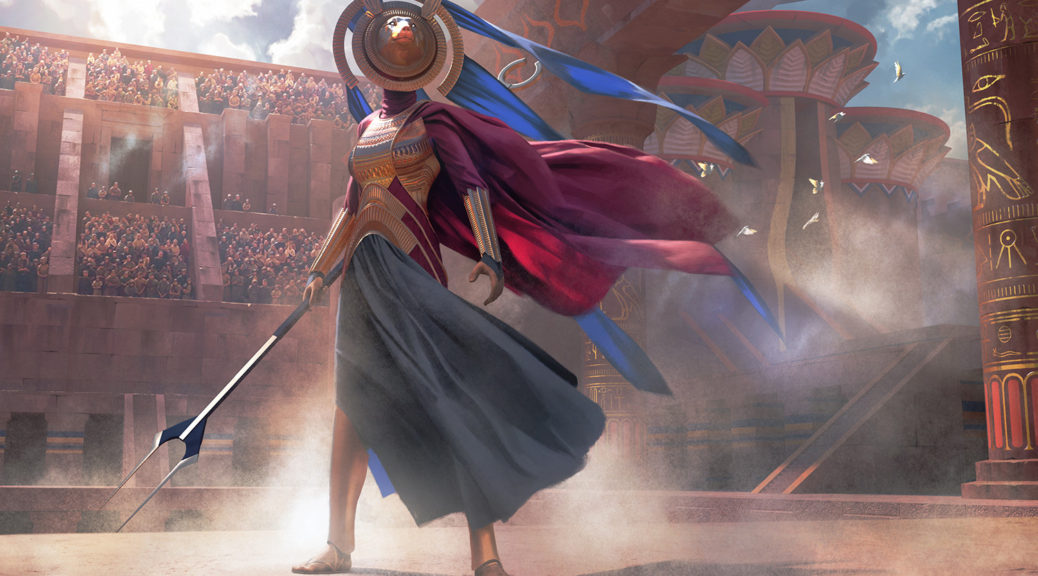 With only a single weekend’s worth of New Standard events in the books, and those having been impacted by a late-stage ban, we got a triple limited GP weekend. This is a tad irksome, as I’m sure many of us would have liked to see a more fleshed out format get a chance to stretch its legs. Now we’re heading into the stretch before the Pro Tour with only one good Open to look back on. I suppose that at least this PT will be a bit more exciting, since it’s so much more unexplored than it normally is, especially at this time of the year.

Our best bet will be to watch MTGO dailies to see what floats to the top. Don’t expect the online meta to match the Pro Tour at all of course. Instead, we want to see if any especially powerful or interesting interactions appear. Does a UB control deck pop up that finds a tremendous amount of synergy between Pull from Tomorrow and Liliana, Death’s Majesty, for instance? The deck it lands in may suck, but the cards themselves would be worth considering.

Keep in mind that I’ve also already talked about some cards in previous weeks that are still appealing, especially Aetherworks Marvel. There’s also stuff like zombies, which is looking good, but that I can’t really write about because Cryptbreaker and Relentless Dead already jumped and there isn’t enough meat left on the bones to be worth serious consideration.

In Magic, there are a few truths. Wizards could put $100 bills in the packs and players would complain about how they are folded. Always Bolt the Bird. And, despite an infinite amount of practice and an infinite amount of chances, as a whole we’re bad at figuring out what cards are good. Aftermath, the latest edition of split cards, is yet another example of that.

Basically, any effect or mechanic that acts as though it’s an additional card in your hand is good, even if they’re overcosted. It was true of Flashback, and it’s true of Aftermath. Six mana to Wheel of Fortune is way too much, as is four mana to Commit something, but being able to cast the former several turns after the latter is going to warrant the slot. We’re beginning to see that manifest in a few places.

Commit//Memory is most immediately being put to use in a UG Turbofog deck, an archetype that pops up roughly once every two years. It involves drawing a lot of cards, putting a lot of lands into play, probably taking some extra turns, and yes, casting whatever variant of Fog is currently legal. In this case, Commit stops (or puts back) a problematic permanent from coming down, such as Aetherworks Marvel or an Ishkanah, Grafwidow, and then it shuffle-up-and-deals everything, probably drawing its caster three to seven cards while frustrating your opponent. It appears to be a locked four-of in the strategy so far.

We’re also seeing it pop up in various control strategies; mostly UR Control. Those shells are running four Torrential Gearhulk basically by default, and thanks to Gearhulk’s wording and Commit’s status as an instant, we get one of those powerful synergies I mentioned earlier. In this case, you can flash down Gearhulk on the end of your opponent’s turn and Wheel of Fortune, giving yourself seven brand new cards to work with immediately, while your opponent has to wait through your entire turn before they get access to theirs.

It’s a little tough to say that a card with a combined mana cost of ten is going to be a major component of Standard, but if Turbofog establishes itself as a tier two (or even tier one???) deck and the control lists find they like being able to Torrential Gearhulk a Wheel of Fate, it could easily end up one of the most valuable rares in the set. That may sound expensive, but really, probably means it would sit in the $5 to $9 range. Still, that’s a good bit higher than the $1.50 you can score copies for today.

Admittedly, Hazoret isn’t yet positioned as a purchase. Even though I think he may take a stronger position in the format, I’m still hoping we see his price slip closer to $4 or $5 before he’s seriously worth considering. With the Pro Tour this weekend though, there may not be enough time for that to happen. Depending on how things break, it may be tough to flip copies for a profit if you’re buying and selling on TCG, but there could certainly be profit if you’re the type of player that carries a trade binder.

As for the card itself, “The Pervert,” he’s a heap of damage in exactly the way red decks want it. He’s a hasty four-drop, which is sort of the standard for aggressive red cards, you turn him on by doing exactly what you want to anyways, which is dump all your cards, and finally, he provides reach, which is desperately important when you’re trying to close the game out.

We didn’t see too much of him at Atlanta last weekend, but he was a 4-of in two 5-0 constructed leagues, alongside Scrapheap Scrounger, Key to the City, and a bunch of madness cards. That’s enough to at least draw our attention.

Were he to take the position as the top end of multiple aggressive strategies, Hazoret’s price would push into the low teens. Most of the decks are commons and uncommons, and so far it looks like Hazoret could be the only mythic in several lists. Given that there’s almost always at least one aggressive deck that does reasonable at a Pro Tour, I’d encourage you to look for these in trade this week at your store, and if it’s the type of card you’d like to play with, at least consider purchasing a set for yourself.

Loathe as I am to admit it, lest Corbin hear me, Merfolk isn’t the worst deck in Modern. In fact, it’s one of the best fair decks you can find. There’s nothing too clever or fancy, just a slew of threats that will get your opponent dead real fast if you don’t execute your game plan perfectly. It also gets to play with Aether Vial, a card who makes the “fair” description of Merfolk questionable at best.

Merfolk popped up on MTGO recently, and really, it doesn’t actually leave. It’s always there, casting Spreading Seas and then attacking with four unblockable 5/5s. The list is fairly consistent too, and therein lies our target: Silvergill Adept has been a permanent part of Merfolk since Modern was introduced. With the need to maintain such a high creature density, Merfolk can’t make room for very many spells. Silvergill plays much-needed double duty here, attacking and drawing cards both. There’s room for Merfolk to move around some of the numbers it plays based on meta, but I don’t think I’ve seen a successful list a single time that didn’t have all the Silvergills it could manage.

As a Lorwyn uncommon, overall supply is comically low compared to many other Modern staples. There’s a fair bit on TCG right now, but it’s been a real card for years, so there aren’t a lot of copies left hiding in the woodwork. It jumped to $6 about three years ago, and $4.50 one year ago after Harbinger of the Tides was printed. One of these days it’s likely to be a highly in-demand card again, and if that comes before it’s reprinted, $10 will be on the low end of the range of potential prices.