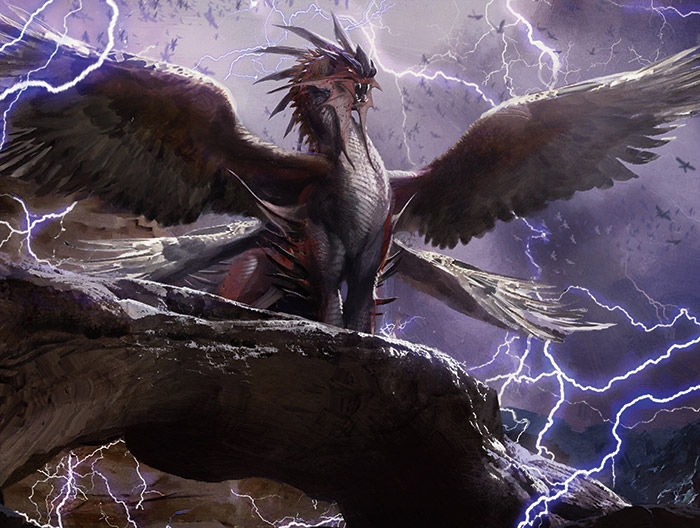 As usual, I am letting what is actually getting built dictate what I talk about which is why I haven’t talked about cats in a while and why I talked about Edgar Markov last week despite not really wanting to. Edgar Markov is popular this week, though. It’s the most popular deck built on sites scraped by EDHREC, more popular than the second and third (new) most popular decks combined. That said, there isn’t much money to be made from Edgar Markov decks, I don’t think. Someone asked on Twitter about Necropolis Regent and that is a card I didn’t but probably should have talked about last week. I don’t want people to think I don’t read their comments so let’s take a look at it before I launch into this week’s article. 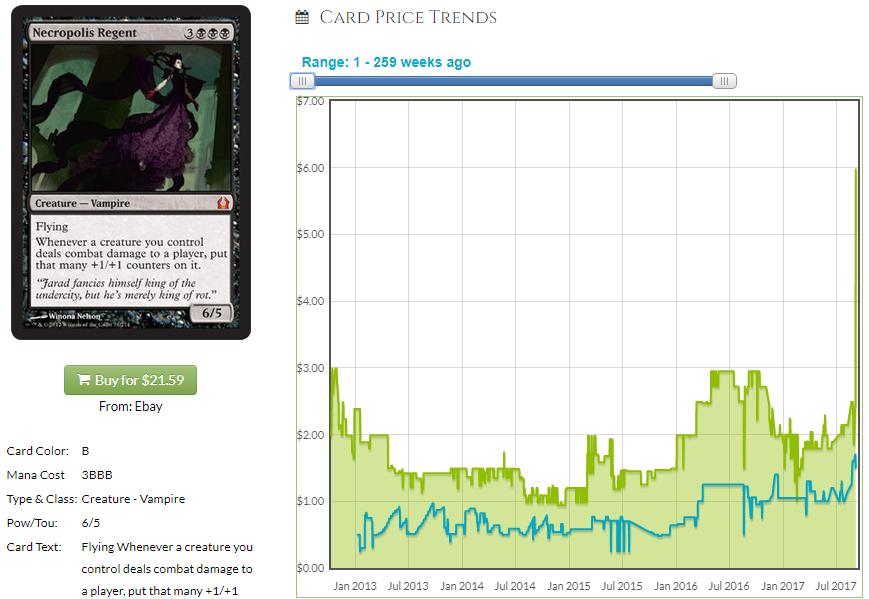 Regent was priming for a jump last week and I missed it. I think BBB is tough for a vampire deck, but I also advocated Vampire Nocturnus which is BBB and has a larger supply than Regent. Regent is in about half of the new Edgar decks being built and since it’s the most popular commander of the week, supply is going to continue to dry up. I found some very cheap (sub $2) copies online but for the most part, the major retailers are seeing copies disappear. It would have been nice to have warned you a week ago, but Pro Traders can scoop those cheap copies before this is a $10 card. Credit to Steven Kestner for noticing I neglected to mention this sauce monster. If I’d checked the graph I would have likely noticed that this was going in a very positive direction but I don’t always check the graph of every single card on EDHREC. Maybe I should start.

I mean, you’re allowed to, too. I’m not saying I’m not good at this, I think I have a good track record, especially since I switched over to EDH finance full-time. I will say that there are cards I’m going to miss just out of neglect. Telling you not to buy a card is one thing, but seeming not to endorse a card by omission could mean I deemed the card unworthy of discussion or it could just mean I missed it. You can use the tools I use, too, so make sure and follow up on hunches you have. I’m teaching you all to fish with this column, after all.

Let’s apply the same, (apparently flawed) process that we used last week to a new deck and see if we can’t tease out a few cards that are on their way to getting there.

While Edgar Markov continues to top the charts, The Ur-Dragon. With as many decks built this week as Atraxa, a perennial juggernaut, Ur-Dragon’s numbers seem robust enough to give it a second look, although I feel that just looking at old Scion of the Ur-Dragon builds was enough to mostly predict what was going to happen. Ur-Dragon doesn’t seem better than Scion in absolute terms and that leads me to believe the bulk of new people building the deck are people who didn’t have a Scion deck before and are therefore going to be popping and modifying the precon deck. This was something I dismissed earlier when Scion was first spoiled (what feels like a year ago) but which could actually bear some fruit. I only need to find four or five buying opportunities, really, to make you all some money and with decks getting built 100 cards at a time, there should be quite a bit to discuss. Let’s try and avoid discussing anything in the precon, which limits us a bit but if we look at Scion decks as well, we can see which staples didn’t get reprinted and therefore what the precon buyers may upgrade to later.

EDHREC is currently working on a filter that will remove cards that are in precons from the results which will be a big help for undertakings like this. Until then, let’s brute force our way through this. 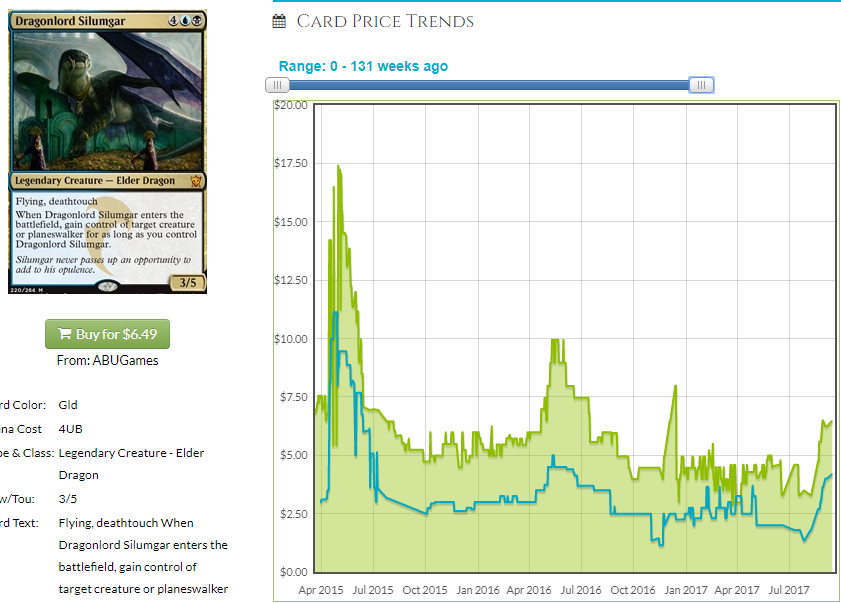 I think the price trends on this are promising. This isn’t Dromoka money and never will be, but it will be more than it is now. I think these Dragonlords are like the gods of their set in that there will be a tendency for some to collect them as a set and the playable ones will have quite a bit of upside and potentially pull up the less playable ones. Since Kolaghan is useless in EDH, this is basically a cycle of 4 (or 9 if you count the non-Dragonlord versions of these dragons) for EDH consideration. Silumgar is good in a deck like this and even fine at the helm of (I read somewhere they’re female) her own deck so I think while Dromoka popped first, that just meant we have more time to see Silumgar’s spike coming. 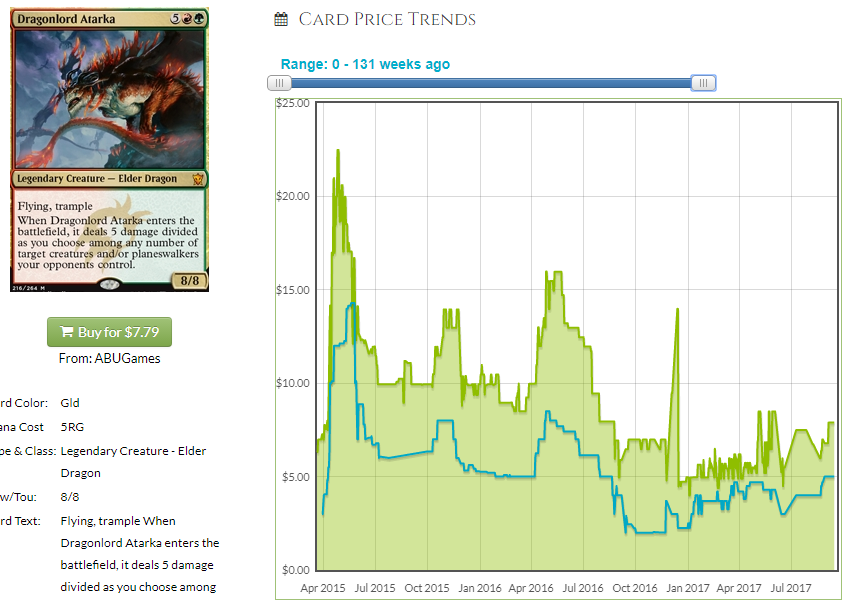 While we’re on the subject, Atarka’s graph is showing a lot of the same tendencies as Silumgar’s, but the increase is a little smoother and therefore hasn’t tripped anyone’s “If the price goes up by more than 9%, highlight the price in green” algorithms. Silumgar was on interests pages but this wasn’t and it’s likely got the same or better upside and its graph looks almost identical. The crazy thing is, if you’re playing a 5-color Dragon deck, Silumgar’s ability scales way better for 40 life multiplayer but Atarka seems to have equal upside based on historical data (which was predicated on a different format so it’s misleading). I don’t think Atarka is near as good as Silumgar but since this can go in decks like Xenagos and Mayael, I think the extra demand could be more relevant than playability*. Atarka is in over 3,000 decks on EDHREC and Silumgar is in fewer than 2,500. The numbers aren’t as important as the ratio – Atarka is in 20% more decks and all things being equal, should have 20% more upside if those trends continue. I don’t think that as many Mayael decks will get built in the next few months as, say, Scarab God which prefers Silumgar, but I think all that does is equalize these cards. If you like Silumgar, you should feel the exact same way about Atarka.

*As an aside, I want to address something I addressed in the comments a few weeks ago on the Mairsil article. People were asking why I advocated Morphling as the pickup when Aetherling seemingly had better abilities. It doesn’t matter. People aren’t picking the best ‘ling of the bunch, they’re playing all of them. When there is the potential for redundancy, most EDH players will go for it if the effect matters. You don’t see a disparity between the three ‘lings, they all are in roughly the same number of decks. That means Morphling has more upside because supply is lower and demand is the same. I think playability matters in terms of “this is playable” or “this is unplayable” but I think “this is a better card than that one” doesn’t always matter in EDH so watch out you don’t logic yourself out of a good spec by assuming playability matters more than supply. 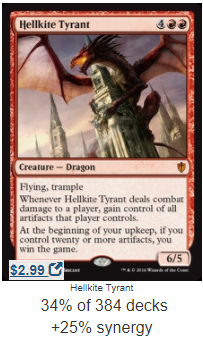 You know how I like those reverse-J-shaped graphs? Tyrant is at a historic low but is beginning to tail up and I think there is an opportunity to make some money. It’s a card that does very powerful things in EDH, stealing their stuff and winning the game (it’s happened a non-zero number of times, including once to me) sometimes, so it’s a very EDH card. The spiking of the foils was easy to predict and the recovery of the non-foils is similar. I like this card a lot right now. Even after a reprinting, the price hasn’t gone down all that much. This seems ripe. 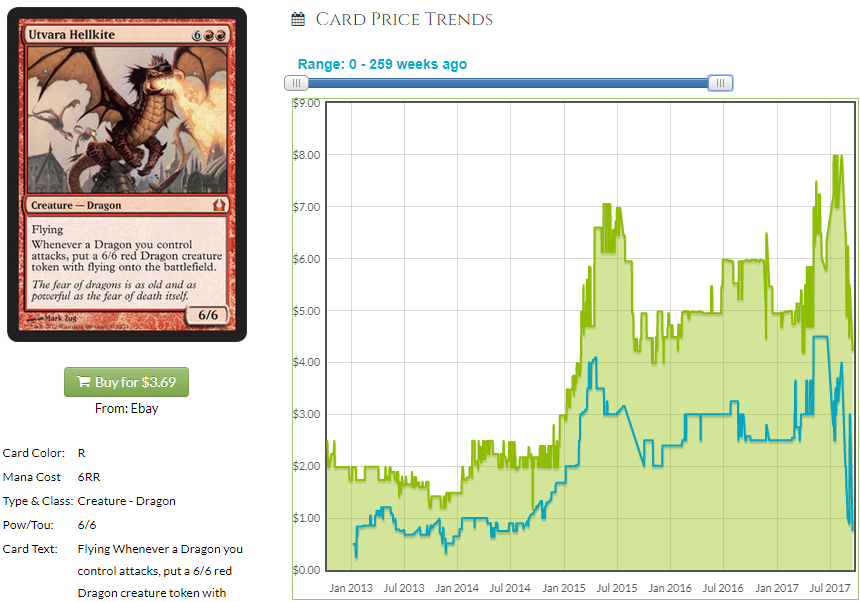 Another card starting its “beginning of the U-shaped graph” plunge, I like these at their bottom. I am not sure what the bottom will be, but with a printing in the precon, this is likely to tank a lot. Everyone building a Dragon deck this year likely uses the copy from the precon meaning new demand will have to emerge. That said, there were always dragon decks being built before. We run a real risk with reprints like this that mostly go in the deck they’re printed in as opposed to a reprint like Crypt Ghast, so I’m cautioning you not to treat this card like most reprinted staples – it’s not like them. However, this is a real card, it’s a bulk mythic that ascended to a high of $8 before being reprinted and it’s a card that likely doesn’t get reprinted again for a good long time. If this craters at like $1, I think you go for it.

There are a few cards I think will be specific to Ur-Dragon decks because you will be more focused on attacking and less-so on the selection criteria for a deck like Scion. Creatures played in Ur-Dragon decks that don’t appear in Scion decks feel more aggressive. 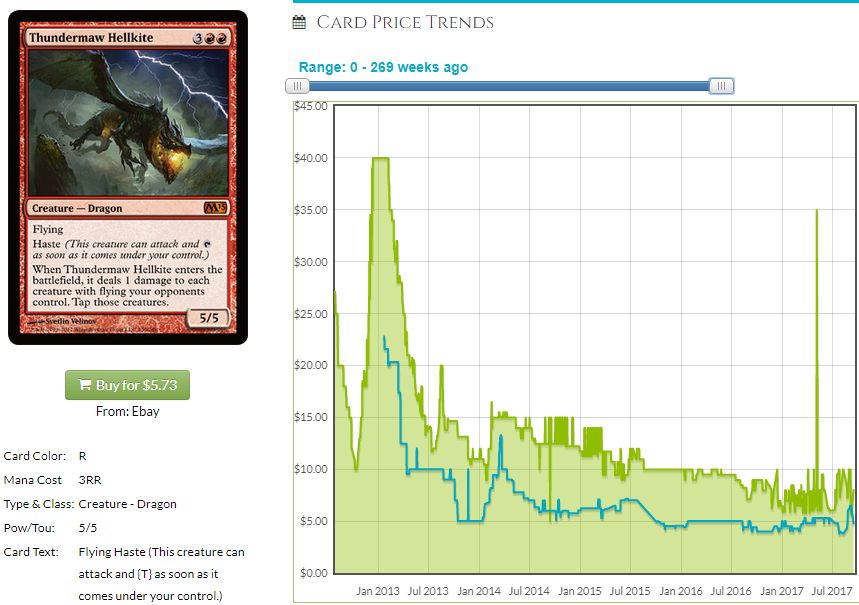 Gettable at around $5, this has demonstrated an ability to be $10-$15ish with some demand and $40 with lots of demand. This also got really cheap before Lingering Souls being everywhere spiked it. This is an aggressive creature and it makes sure your fliers get in there, which means you draw hella cards with your Commander and get free perms. I think this has some upside although the recent price behavior has been weird with the price fluctuating a lot and currently being on a downswing. It’s possible that it was bought out and spiked temporarily due to speculation about its inclusion in a Dargons deck but I think there is real demand for this card. At 18% total inclusion, it’s far from a staple, but there is a medium between “This is $35 now!” and “Just kidding, this is $5 now.” 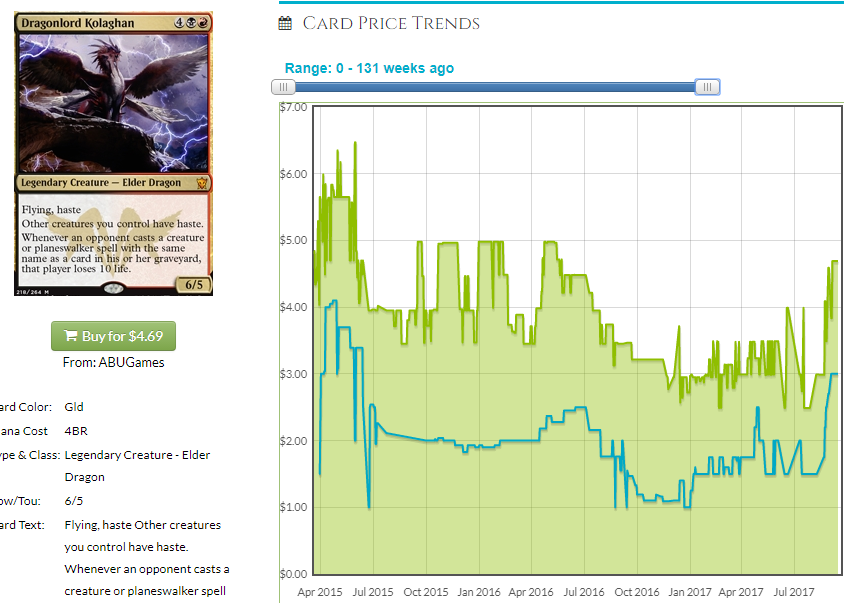 I wasn’t going to mention this before because this belongs in the special “Scion doesn’t want this but Ur-Dragon does” section because this card is very aggro-oriented. Would you play this card in EDH? 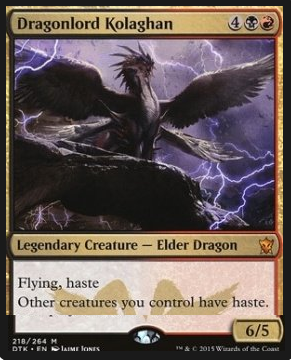 You might in Ur-Dragon because it has haste, it grants haste and it’s a Dragon, 3 things you want. The other ability seems to make it useless in EDH, but it’s sort of gravy and just because you ask for no gravy doesn’t mean that the rest of your dry, gravy-less meal isn’t perfectly – NO! I can’t do this. Just get the gravy. Learn to like the gravy. Who doesn’t want gravy? My metaphor has fallen apart entirely, much like your bland, gravy-less meal is going to fall apart when you’re drinking a half gallon of that garbage Riesling with the kangaroo on the bottle that your Mother-in-law buys in bulk at Costco just so you can choke down forkfulls of dessicated stuffing with no lubricant because otherwise you sound like a cat with a hairball and then you get on twitter drunk and start retweeting a bunch of gamergate people and lose your job and for what? Just play the stupid haste Dragon.  It even has haste itself, unlike that new Dinosaur I thought I liked until I realized it wasn’t Bloodbraid Elf because it only gives other dinosaurs haste.

The Dragonlords are all in a pretty good spot and if the worst one has upside based on being in 30% of the new Ur-Dragon lists then you probably want to be about all of them. Dromoka set the absolute best case scenario bar high, but there’s no reason that the others can’t approach it. I think if there’s anything I learned today it’s that I should look at more graphs more often. If you learned anything today, I’m not surprised.

Join me next week where our topic will be a different one. Until next time!