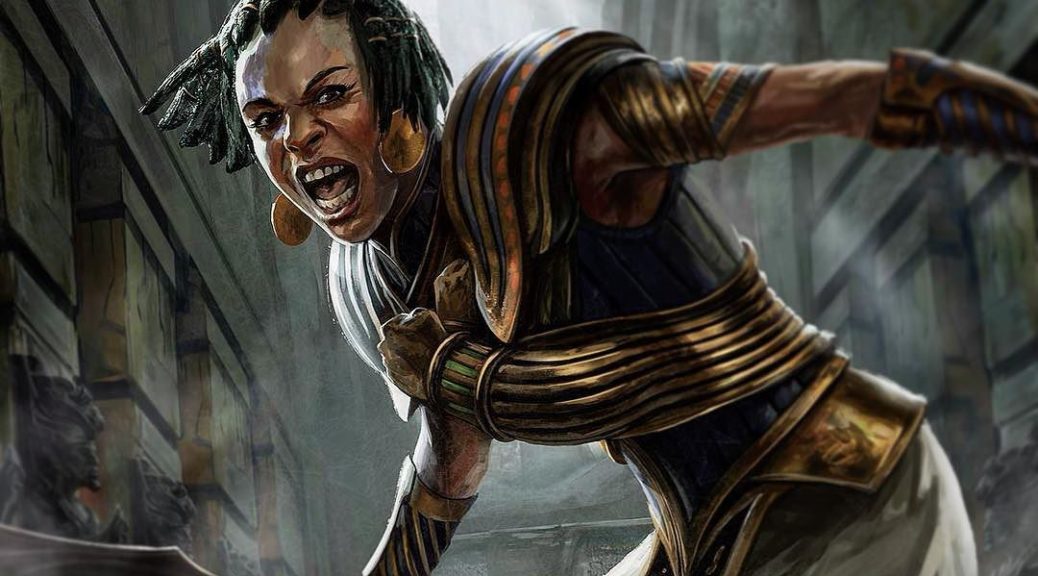 As much as I love the release of a new set, it’s often profitable to take a moment and appreciate the set that’s leaving our draft environment, and while you can still open packs of it, we are at peak supply on Hour of Devastation’s cards.

Instead of focusing on Ixalan and what could be in week one of the new Standard, and the prospect of a Pro Tour in five weeks, I want to mine the set that’s leaving for some value before we kick it to the curb and act like Ixalan is the only one we’ve ever loved–for three months, anyway.

We’ve already had at least one big mover, and the question is, will the spike actually happen or all we just sheep?

Samut, the Tested ($4.50): Three weeks ago, on MTG Fast Finance, Travis talked me into this card and it seems a lot of people either followed his advice or came to the same conclusion. (It’s the style, of course!) The card has about doubled since then, and while Samut does play well with Dinosaurs, I think that the value has gone as a speculative pick. Please don’t pick up a playset of these on eBay for $20 and then turn it over again for $30. You’ll have made something like $2 all told after fees and shipping. 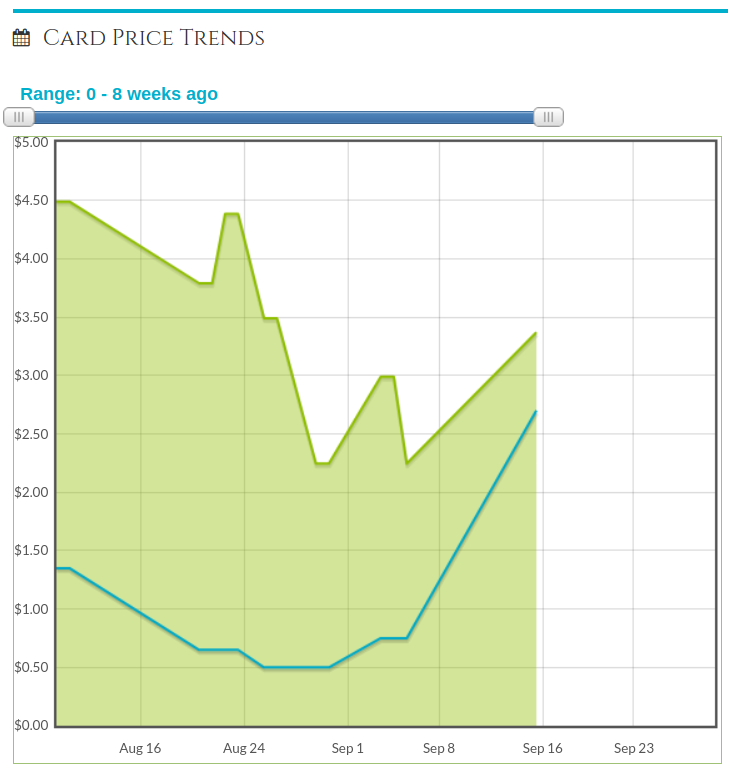 Look at that graph. Buylist today is more than it was three weeks ago. Verrrry tempting to get out now if you just got in, but I’d be holding just a bit longer. Remember, we’ve got one more set with dinosaurs coming!

That being said…if you’re going to play Dinosaurs in Standard, get your playset now. It’s definitely not going to be cheaper, and there’s no doubt that the card will be fun. I know that the saurians can go turn 2 Drover of the Mighty, T3 Ripjaw Raptor, T4 Regisaur Alpha, T5 Carnage Tyrant. That’s a terrifying curve, no way around it. There’s room for other cards, though, and Samut might just be the thing. I’m not buying more at this rice, but I’m fine trading for it.

Hour of Devastation ($3.50): Yes, damage-based board wipes are a bad thing in the land of ‘Enrage – draw a card’ and six-toughness hexproof. I think you should not be buying these….yet. Just because it’s bad against one deck doesn’t mean it’s unplayable. This has less room to grow, being a rare instead of a mythic, but if Dinos aren’t tier one, then this card will be.

Torment of Hailfire ($2.50): I foresee a Panharmonicon-like spike in its future, as it goes from ‘awesome Commander card’ to ‘new Standard hotness’ on the back of one good video or one on-camera display. Casting this for a bunch feels great in Commander, but it’s got real potential in Standard, too. I like buying at this price, because the casual demand will get there eventually, even if Standard doesn’t pay off. 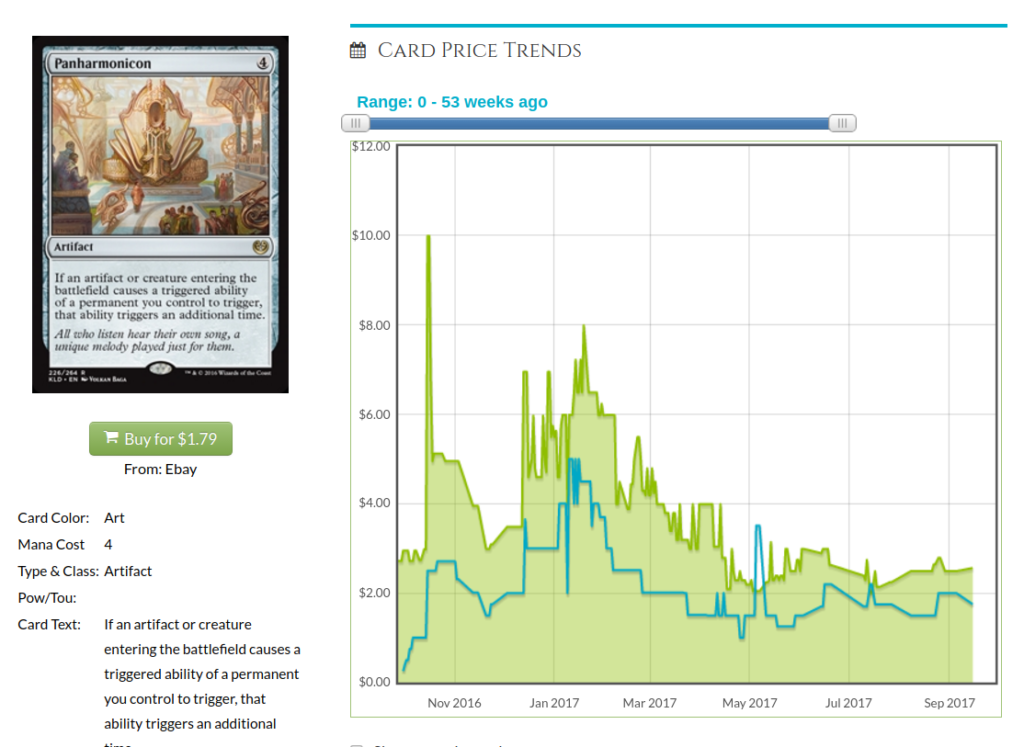 (That’s a really low price for such a busted Commander card. Go buy some.)

Abrade ($2): You might laugh, but this is a go-to card for the next year for sure, since Kaladesh will rotate out at the same time. Smuggler’s Copter (itself a great pickup at $2, since it just won a Modern SCG IQ as a two-of in a Merfolk deck) isn’t a threat but there’s a lot of other good vehicles out there, and there’s no reason red decks won’t have this as a full set in the sideboard, if not the main. It’s even flexible enough to merit Commander inclusion!

I don’t see this being Fatal Push in value, but I think it’s going to go up by 50-100% in the next few months, so get your sets now. If you’re going to pick this up in volume, be ready to get out early, as it doesn’t yet look like this is Modern sideboard material.

Foil Swarm Intelligence ($1.50): I am always on the lookout for big silly Commander cards, and this is that card. I love getting foils for stuff like this at such lows, and for a card that basically bulk, this has a pretty big multiplier. Pick up some now, put them someplace safe, and when the time comes around, you’ll have a big gainer.

Finally, I want to bring up two cards that I am picking up at their lowest prices: Fumigate and Dusk//Dawn. Fumigate is up to $2, and that’s a solid price, unless it’s the new way to deal with the saurian menace. I can easily see this getting up to $5 if people become scared of damage-based board wipes.

Dusk might be positioned even better, because with Regisaur Alpha out, even the Ranging Raptors and the Drover of the Mighty will get destroyed. This is only $1.50, and a very solid pickup in anticipation of Standard use.